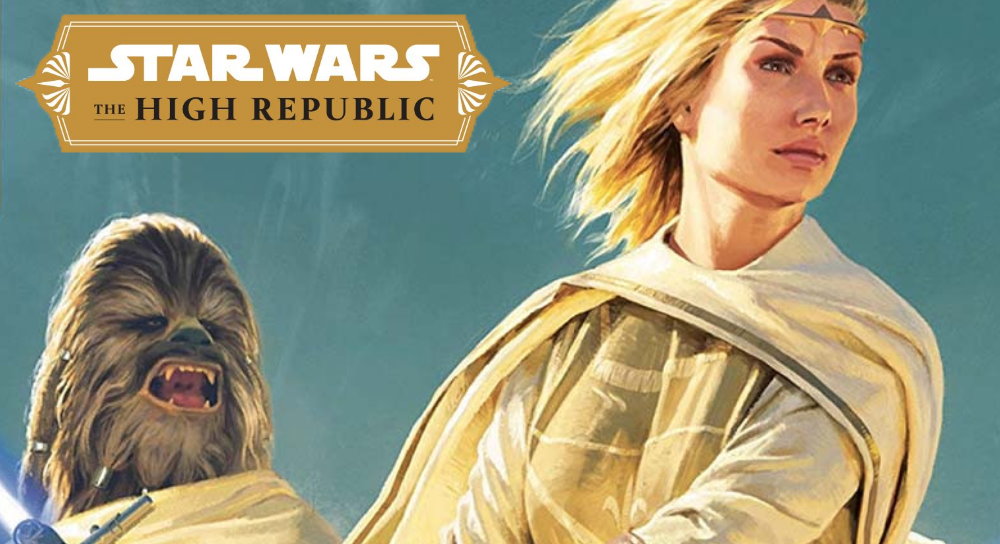 From Charles Soule, currently on something of a on a hot streak with his excellent Star Wars title from Marvel delighting the masses, comes an excerpt from Light of the Jedi, the first novel from The High republic which lands 5th January 2021. Here, StarWars.com reveal chapter 2 of the book, laying out the landscape for this highly anticipated series.

Ready to clock out for the day, ready to get the shuttle back to the inner system, ready to hit the cantina a few streets away from the spaceport on the Rooted Moon where Sella worked tending bar, ready to see if today was the day he might find the courage to ask her out. She was Twi’lek, and he was Mirialan, but what difference did that make? We are all the Republic. Chancellor Soh’s big slogan — but people believed it. Actually, Merven thought he did, too. Attitudes were evolving. The possibilities were endless.

And maybe, one of those possibilities revolved around a scantech (third-class) staffed on a monitoring station far out on the ecliptic of the Hetzal system, itself pretty blasted far out on the Rim, sadly distant from the bright lights and interesting worlds of the Republic Core. Perhaps that scantech (third-class), who spent his days staring at holoscreens, logging starship traffic in and out of the system, could actually catch the eye of the lovely scarlet-skinned woman who served him up a mug of the local ale, three or four nights a week. Sella usually stayed around to chat with him for a while, circling back as other customers drifted in and out of her little tavern. She seemed to find his stories about life on the far edge of the system inexplicably interesting. Merven didn’t get why she was so fascinated. Sometimes ships showed up in-system, popping in from hyperspace and appearing on his screens, and other times ships left . . . at which point their little icons disappeared from his screens. Nothing interesting ever happened — flight plans were logged ahead of time, so he usually knew what was coming or going. Merven was responsible for making sure those flight plans were followed, and not much else. On the off chance something unusual occurred, his job was just to notify people significantly more important than he was.

Yeah. He was going to ask her to dinner. Tonight. He’d been saving up, and he knew a place not too far from the cantina. Not so far from his place, either, but that was getting ahead of himself.

He just had to get through his blasted shift.

Merven glanced over at his colleague, Scantech (second-class) Vel Carann. He wanted to ask her if he could check out a little early that day, take the shuttle back to the Rooted Moon. She was reading something on a datapad, her eyes rapt. Probably one of the Jedi romances she was always obsessed with. Merven didn’t get it. He’d read a few — they were all set at outposts on the far Republic frontiers, full of unrequited love and longing glances . . . the only action was the lightsaber battles that were clearly a substitute for what the characters really wanted to do. Vel wasn’t supposed to be reading personal material on company time, but if he called her out on it, she’d just tap the screen and switch it to a technical manual and insist she wasn’t doing any- thing wrong. The trouble was, she was second-class, and he was third-class, which meant that as long as he did his job, she thought she didn’t have to do hers.

Nah. Not even worth asking for an early sign-off time. Not from Vel. He could get through the rest of his shift. Not long now, and —

Something appeared on one of his screens. “Huh,” Merven said.

That was odd. Nothing was scheduled to enter the system for another twenty minutes or so.

Something else appeared. A number of somethings. Ten. “What the — ?” Merven said.

“Problem, Getter?” Vel asked, not glancing up from her screen. “I’m not sure,” he said. “Got a bunch of unscheduled entries to the system, and they’re not decelerating.”

“Wait . . . what?” Vel said, setting down her datascreen and finally looking at her own monitors. “Oh, that is odd.”

More icons popped up on Merven’s screens, too many to count at a glance.

“At that velocity? From hyperspace? I dunno. Run an analysis,” Merven said. “See if you can figure out what they are.”

“I . . . don’t know how,” she said. “After the latest upgrade, I never bothered to learn the systems. You seemed to have it all under control, and I’m really here to supervise, you know, and — ”

“Fine,” he said, utterly unsurprised. “Can you track trajectories, at least? That subroutine’s been the same for like two years.”

Merven turned back to his screens and started typing commands across his keypads.

There were now forty-two anomalies in-system, all moving at a velocity near lightspeed. Incredibly fast, in other words, much quicker than safety regulations allowed. If they were in fact ships, whoever was piloting them was in for a massive fine. But Merven didn’t think they were ships. They were too small, for one thing, and didn’t have drive signatures.

Asteroids, maybe? Space rocks, somehow thrown into the system? Some kind of weird space storm, or a comet swarm? It couldn’t be an attack, that much he knew. The Republic was at peace, and looked like it was going to stay that way. Everyone was happy, living their lives. The Republic worked. Besides, the Hetzal system didn’t have anything worth attacking. It was just an ordinary set of planets, the primeworld and its two inhabited moons — the Fruited and the Rooted — with a deep focus on agricultural production. It had some gas giants and frozen balls of rock, but really it was just a lot of farmers and all the things they grew. Merven knew it was important, that Hetzal exported food all over the Outer Rim, and some of its output even found its way to the inner systems. There was that bacta stuff he’d been reading about, too, some kind of miracle replacement for juvan they were trying to grow on the primeworld, supposed to revolutionize medicine if they could ever figure out how to farm it in volume . . . but still, it was all just plants. It was hard to get excited about plants.

As far as he was concerned, Hetzal’s biggest claim to fame was that it was the homeworld of a famous gill-singer named Illoria Daze, who could vibrate her vocal apparatus in such a way as to sing melodies in six-part harmony. That, in combination with a uniquely appealing wit and rags-to-riches backstory, had made her famous across the Republic. But Illoria wasn’t even here. She lived on Alderaan now, with the fancy people.

Hetzal had nothing of any real value. None of this made sense.

Another rash of objects appeared on his screens, so many now that it was overloading his computer’s ability to track them. He zoomed out the resolution, shifting to a system-wide view, making a clearer picture. Merven could see that the things, whatever they might be, were not restricting themselves to entering the system from the safety of the hyperspace access zone. They were popping up everywhere, and some were getting awfully close to —

“I see it, too,” Merven said. He didn’t even have to run a trajectory analysis.

The anomalies were headed sunward, and many of them were on intercept courses with the inhabited worlds and their orbital stations. The things weren’t slowing down, either. Not at all. At near-lightspeed, it didn’t matter whether they were asteroids, or ships, or frothy bubbles of fizz-candy. Whatever they hit would just . . . go.

As he watched, one of the objects smashed through an un-crewed communications satellite. Both the anomaly and the satellite vanished from his screen, and the galaxy got itself a little more space dust.

Hetzal Prime was big enough that it could endure a few impacts like that and survive as a planetary body. Even the two inhabited moons might be able to take a couple of hits. But anything living on them . . .

Sella was on the Rooted Moon right now.

“We have to get out of here,” he said. “We’re right in the target zone, and more of these things are appearing every second. We have to get to the shuttle.”

“I agree,” Vel said, some semblance of command returning to her voice. “But we need to send a system-wide alert first. We have to.”

Merven closed his eyes for a moment, then opened them again. “You’re right. Of course.”

“The computer needs authorization codes from both of us to activate the system-wide alarm,” Vel said. “We’ll do it on my signal.”

She tapped a few commands on her keypad. Merven did the same, then waited for her nod. She gave it, and he typed in his code.

A soft, chiming alarm rang through the operations deck as the message went out. Merven knew that a similar sound was now being heard across the Hetzal system, from the cockpits of garbage scows all the way to the minister’s palace on the prime world. Forty billion people just looked up in fear. One of them was a lovely scarlet-skinned Twi’lek probably wondering whether her favorite Mirialan was going to come by the tavern that evening.

“We’ve done our job. Shuttle time. We can send a message explaining what’s happening on the way.”

Vel nodded and levered herself up out of her seat. “Yeah. Let’s get out of — ”

One of the objects leapt out of hyperspace, so near, and moving so fast, that in astronomical terms it was on them the moment it appeared.

A gout of flame, and the anomaly vanished, along with the monitoring station, its two scantechs, and all their goals, fears, skills, hopes, and dreams; the kinetic energy of the object atomizing everything it touched in less than an instant.

Take a look at Star Wars: The High Republic – The Great Jedi Rescue

New excerpt lands from The High Republic: A Test of Courage

Cavan Scott on The High Republic: “It’s all about seeing Star Wars through a different lens”

Meet the villains of The High Republic

Take a look at the padawans of The High Republic

Excerpt from chapter 2 of Star Wars: The High Republic: A Test of Courage

More information regarding The High Republic novel from Cavan Scott