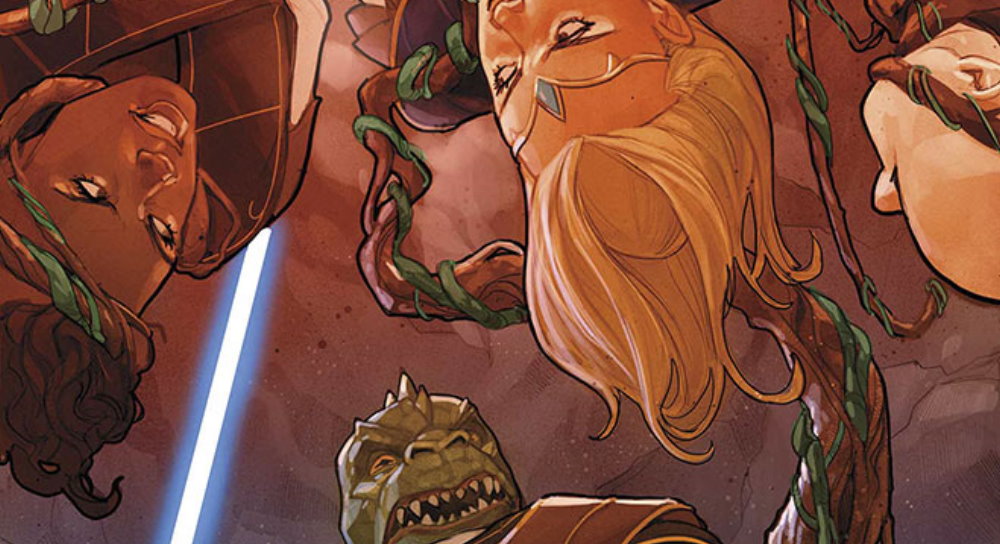 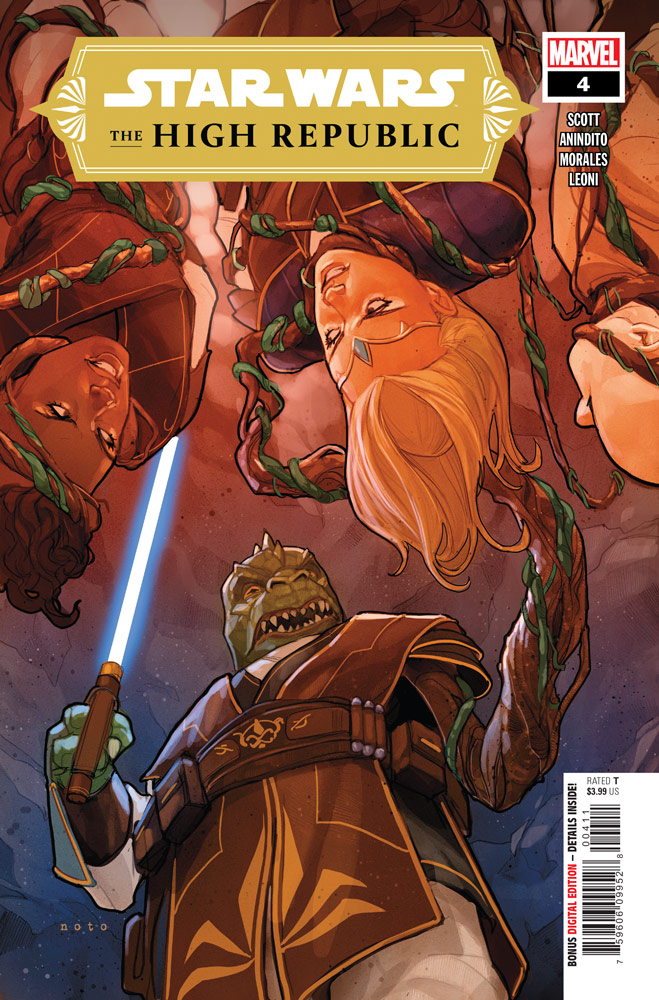 “SONG OF THE DRENGIR”

A derelict Hutt ship. A Nihil incursion. Missing colonists. The Starlight Jedi’s hunt for answers leads them into a deadly trap set by the monstrous DRENGIR.

But the Drengir now controls Jedi Master Sskeer. The first target for the Drengir’s dark harvest? His former apprentice, Keeve….

As we kick off issue four with Keeve Trennis thinking back to days past, as she trained on the rocky ridges of Kirima with her Trandoshan Master Sskeer, it’s clear that all is not right in her world. Back then her evolving skills weren’t enough to propel her across a ravine, and a deadly fall was ended by Sskeer’s use of the Force to cushion her landing. Jump to the present and Keeve, Avar Kris and Ceret are held captive by the Drengir and Sskeer, his mind under their control. He explains the history of the Drengir, as they reaped havoc and ate their way through the cosmos, making alliances only to be betrayed and sealed in tombs until awakened from their slumber.

We hop across the galaxy to Starlight Beacon, and Sskeer’s dire words are about to be bourne out as the cadaver of the Hutt brought to the station last issue begins to move and tendrils shoot out; it appears to be infected with the Drengir. Cutting back to Keeve, Kriss and Ceret we see Sskeer break free of the Drengir influence, his will stronger than their powers and together the Jedi leap into action to save Bartoc, the young boy captured along with them who is still with the Drengir. However, the tendrils of the Drengir are still inside Sskeer, but as much as they could control him, so he can sense their plans through those tendrils and so he leaves them where they are as Keeve attacks the nearest Drengir and Avar Kris heads back into town to confront Kal Sulman, the local community leader followed by an angry Sskeer, now understanding why Sulman didn’t want them there, as the Drengir had ‘taken root’.

We wrap up the issue as Starlight Beacon erupts into chaos as the Drengir attack and the Hutt cartel arrive to take the village, setting up a barnstorming fifth issue, riding what appear to be rancor-like creatures. It’s an evocative image, one that leaves us wanting more and that’s thanks to the vibrant art of Ario Anindito and the lush colours of Annalisa Leoni. This really is a feast for the eyes to read, and married to the pacey story and snappy dialogue of Cavan Scott (a bucket nod to the Stars’ End mention) this is one to watch as we move deeper into Phase One of The High Republic.