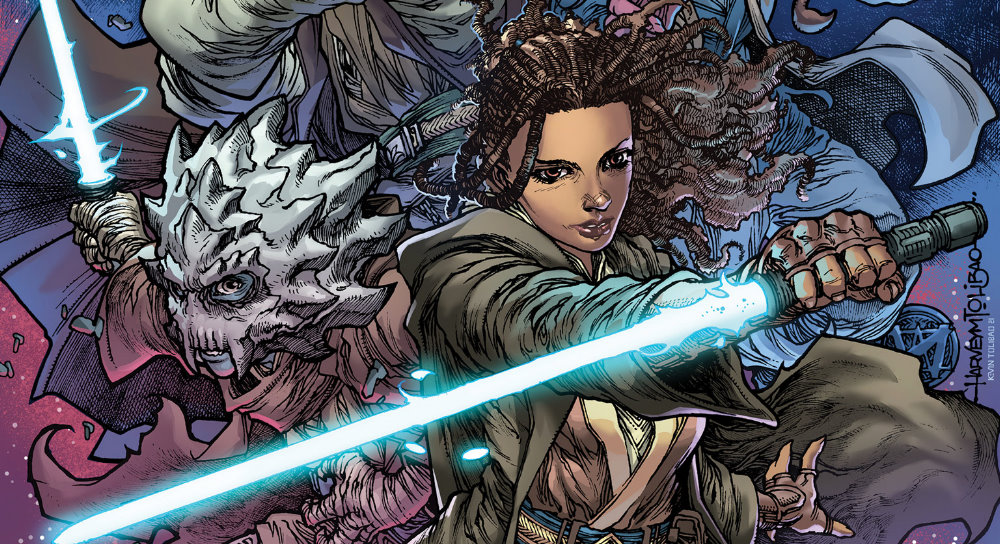 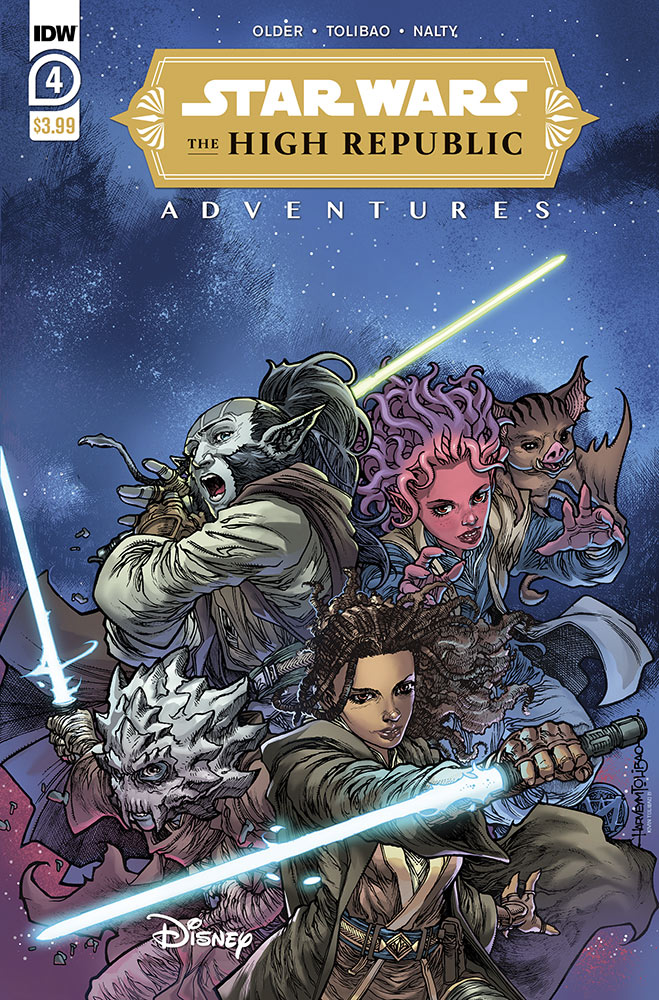 MASTER YODA and the Jedi have offered force-sensitive ZEEN MRALA safety and a home.

But in order to obtain these, they both must give up the only thing that has ever brought them peace: each other….

I’m very happy to report that so far in the early run of The High Republic Adventures we have four issues and four gems. Issue 4 continues right where we left off as Zeen frets about her friend Krix, and the young lad tries to prove himself to the Nihil while figuring out a way to put things right. It’s a tricky balance, and one that goes awry when a routine patrol leads to a skirmish with the Nihil which sees Republic fighters scrambled, leaving the young padawans behind on the Republic outpost on Ord Mantell in the Bright Jewel Sector of the Mid Rim (great to see some geography and a well-timed mention of Ord Mantell after this weeks episode of The Bad Batch).

Meanwhile on the junk moon Quantxi, Krix and Zirr are distracted by a Junk Maven who make it clear they want no part of the Nihil business and lead Krix on a chase as they race towards to communications tower. Above, the Republic attack wing led by Yoda, Buckets of Blood and Kantam Sy engage the Nihil fighters, as back on Ord Mantell Lula is annoyed at being left behind, and as the space battle rages and Krix chases the Junk Maven, Lula realises that Zeen has quickly packed her stuff to leave and find her friend Krix, leaving behind a holo message for her friends who pile into the one remaining Vector and blast off, headed for Quantxi. Now, everyone is alerted to the junk moon as Zeen, Lula and the padawans and the Republic fighters all aim there.

As always, it’s beautifully observed with lush art from Harvey Tolibao and a bouncy script from Daniel Jose Older, and within the action and adventure there’s a paragraph that stood out as Lula and co head for Quantxi. Earlier in the issue, Lula and Zeen were training, and Zeen’s concerns and worries were obvious for Lula to see. No use of the Force, just a friend knowing another friend well enough to read the signs. The issue is called ‘The Mountain’, and that mountain – the Force – is described beautifully:

‘The Force is everchanging, like the sky, and as still as the mountain. It’s the whole universe, each tiny piece of it. And it’s always in motion, will always fall apart, come back together.’

Looking at the entirelty of the saga across the ages, it’s been made clear that the Force has a will and an ebb and flow that sees light and dark rise and fall like a breath or a sunrise and sunset. Here, in a new era where the Republic is at its peak, we know the fall is ahead. The foundations of the Republic will crumble, the superiority of the Jedi will be challenged despite the rise of the sith still being two centuries away. Isolated paragraphs like this just dangle the carrot of doubt in the minds of the reader; we know there will be a deep breath before the fall, but will we know when that breath is taken?

The recent news that Older is on writing duties for Marvel’s freshly announced Trail of Shadows series in October is most welcome, continuing an arrangement that would appear to over the course of the three phases of The High Republic see each of the Project Luminous writers helm comics for IDW and Marvel, Del Rey novels and Young Adult and kids books for Disney. If Trail of Shadows can match the quality of this series pitched at younger readers, then that’s an arrangement that will benefit the readership and the growing timeline of the High Republic era.