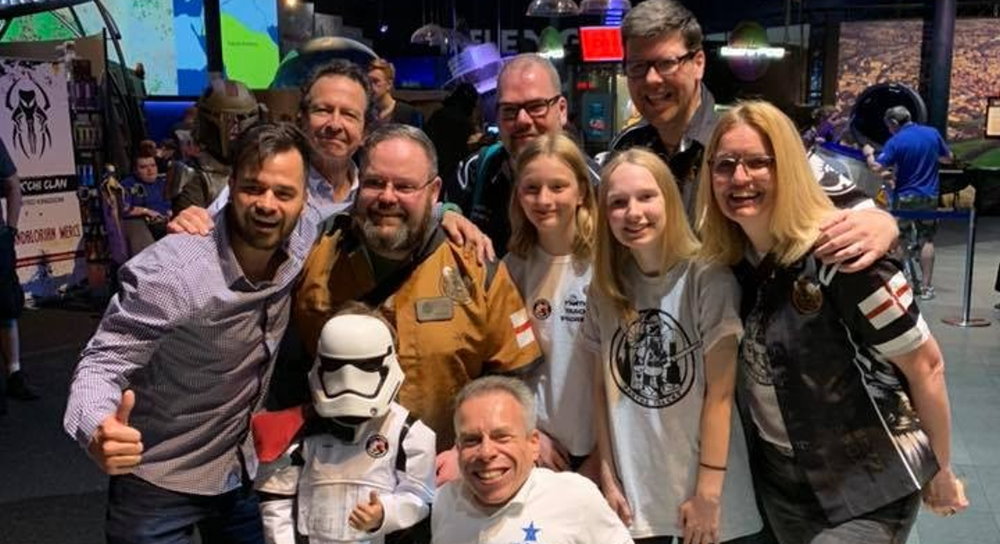 The UK is blessed with a strong contingent of costume groups, and time after time they come together to help fans celebrate their fandom and raise money for worthy causes. Nowhere is this more evident than at the Return of the Garrison event held annually at the UK National Space Centre in Leicester. The UK Garrison, Rebel Legion, Mandalorian Mercs and R2 Builders join forces for this event which over the years has grown from a single day to a weekend long event, and is hit with fans and their families as their are a lot of child-friendly activities, as does the National Space Centre itself.

With the UK having record temperatures over the weekend of 29th – 30th June, Fantha Trackers headed for the bright centre of the fandom universe to join in the fun!

This past weekend was the annual Return of the Garrison event held at the National Space Centre in Leicester. This year the event saw the 501st UK Garrison, Rebel Legion, Galactic Academy and Mandalorian Mercs coming together to celebrate 20 years of The Phantom Menace.

At the entrance to the building numerous costumers were welcoming guests and posing for photos in the glorious sunny day which must have been sweltering for some them, especially the Wookiees.

Inside the Space Centre, attendees were treated to the Hyperspace Hypermarket selling a good selection of vintage and modern items.

Hands on craft and colouring sessions for children as well as lightsaber training masterclasses ran by the Silver Sabres.

The 501st were running their Droid Hunt game, where they give you a lanyard to symbolise some droids. When a trooper patrolling the show floor then see you wearing this he will ask you “How long have you had these droids?” There’s no wrong or right answer, it’s just a bit of fun interaction, but I of course said “Three or four seasons, they’re up for sale if you want them”. The trooper will then exchange your lanyard for a raffle ticket which you take back to the 501st stand to see if you’ve won a prize.

I attended on the Saturday when guests included Andy Secombe, best know to Star Wars fans as the voice of Watto and Daniel Logan who played young Boba Fett in Attack of the Clones and The Clone Wars animated series.

I also bumped into fellow Fantha Tracker Andrew Fearnside which was the first time meeting him in person after knowing him for several years online now.

An excellent day I’m sure to return to again, especially when my son is old enough to join in the days activities.

The ranks of the UKG, the Rebel Legion, the R2 Builders and the Mando Mercs were out on the day, walking the halls of the National Space Centre and adding colour and excitement to a show that was, as usual, packed to the gills.

Luckily for all the weather was warm, the atmosphere was fun and the ice cream was just amazing as Star Wars fans sampled all kinds of GFFA fun. For autograph collectors there were three superb guests. Warwick Davis once again graced the halls of the NSC along with his daughter Annabelle, joined by Attack of the Clones and The Clone Wars young Boba Fett Daniel Logan and the man behind Watto in The Phantom Menace and Attack of the Clones Andy Secombe. 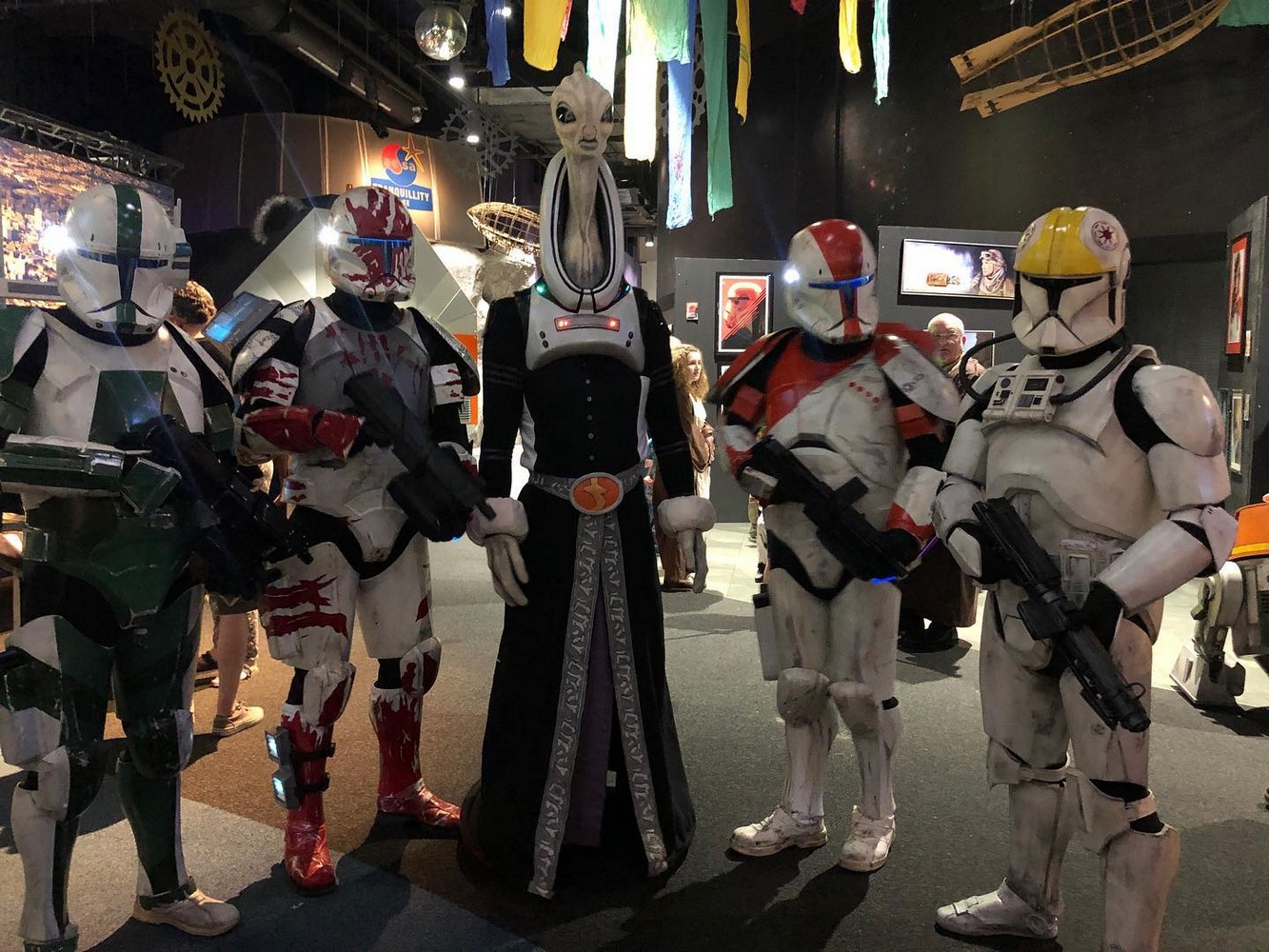 Joined by my fellow Fantha Trackers Clair, Carl, Matt and their kids we had a blast as always, catching up with friends at the event and sampling everything the NSC had to offer.

For me it’s a can’t-miss event, and I’m already looking forward to the next chance to head to Leicester and hang out with some galactic pals.

This event is one of my favourite Star Wars exclusive events! We booked our tickets online and by doing that we now have an annual pass for the National Space Centre as one trip isn’t enough particularly as the Return Of The Garrison event takes up a whole day on it’s own!

Some of our favourite activities this year included:

The droid hunt. My daughter actively avoided the stormtroopers and had her eyes set on the dark lord himself! After handing over the lanyard she went to claim her prize which was a book about spaceships and rockets. One very happy lady!

Speaking of which I was very happy to Fantha Tracks favourite baker Bakeology at this years event. New to their collection was an amazing range of FUNKO inspired buns. I can testify the buns were delicious with a lovely cup of tea.

As always this event is so family friendly and great to bring the kids big and little to ! With guest signings, stalls, displays and of course the amazing Cosplay it makes me realise how lucky we are in the UK to be able to have such intimate and fun events solely for Star Wars while raising money for a fabulous charity.

Thanks to all involved, until next year!

This show has gone from strength to strength over the years, and like many of the Fantha Trackers’ favourite shows it has a really relaxed, family friendly atmosphere. I knew I was in for a rough day when not having even been out the car for 5 minutes I was accosted by some Imperial troops. I was also taken prisoner by the Mandalorians, but managed to explore my dark side blasting some troopers whilst sporting a TK bucket – and I managed a hit!

The day started really busily and the National Space Centre soon filled up and the guests were reassuringly busy until well after lunch. In addition there were a couple of traders with a wide range of toys and collectibles to suit all budgets and meaning that both children looking to spend their pocket money and avid collectors seeking that rare MoC could shop to their wallets content.

The guests for the Sunday were Daniel Logan and Andrew Secombe putting in their second day meeting fans, and the ever popular Warwick Davis and his daughter Annabelle who have a string of credits across the whole saga between them, and have also appeared together in the Harry Potter films.

Also in attendance was our favourite baker, Graham from Bakeology, so we stocked up on cupcakes and may have arranged another Fantha Bake Off….(so keep an eye out on Fantha Tracks TV for that!)

We were also fortunate enough to be able to get a team photo with Warwick, Andrew and Daniel – all of whom should have been exhausted after a hectic day, but kept smiling for the cameras and the fans who were still around chatting to them.

Another excellent weekend, a credit to the organising team and hopefully a lot of money raised for the associated charities. We’ll see you again next year! 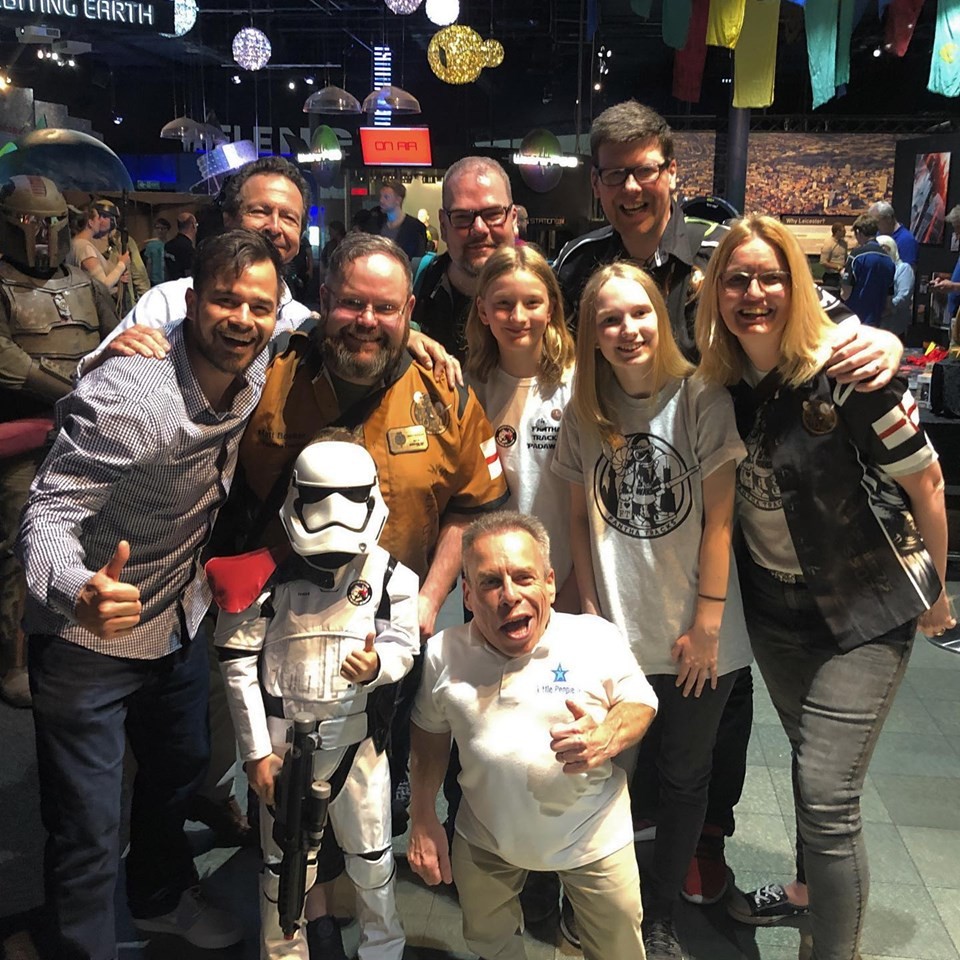 Another surprise on the Sunday was Matt’s long-overdue induction as an Ally of the Mandalorian Mercs.

My induction was a complete surprise and it was an honour to get inducted into the Mando Mercs. As a Fett focus collector of over twenty years, this means a lot to me and I was totally humbled to be recognised by the group.

It was also a huge bonus to have Daniel Logan and my son there too!!

Star Wars®: The Bounty Hunter Code (Star Wars (Chronicle))
$15.99
Buy on Amazon This is a paid link. Learn More. Clicking the link may take you to the Amazon store servicing your country Price incl. tax, excl. shipping.  Details correct as at: 2021-07-31