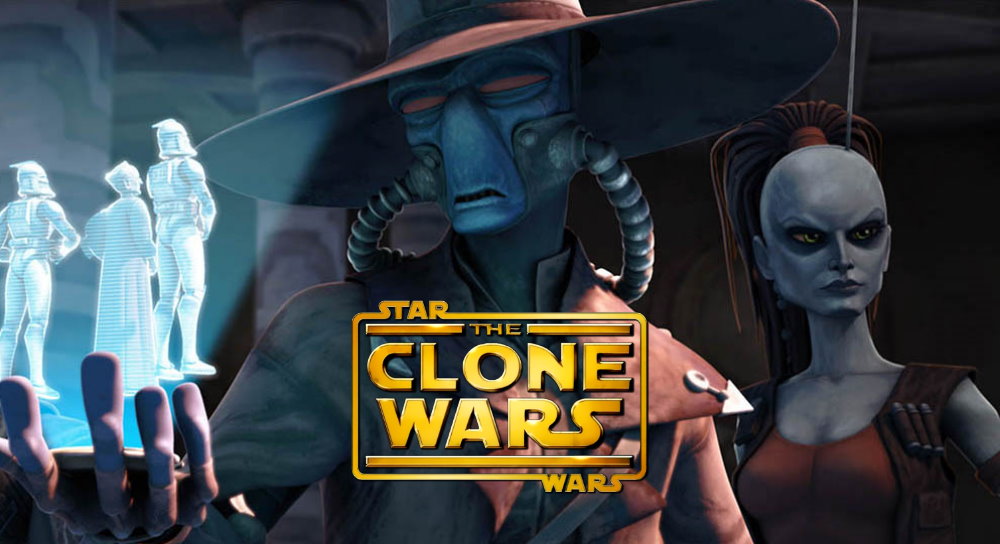 When The Clone Wars first aired back in late 2008, Lightsabre.co.uk guest reviewers looked at the show, giving their initial gut impressions on that groundbreaking first season – but not every review was completed, and so those reviews written at the time were never published. In a newly written article, Mark Newbold looks back at the twenty-second and final episode of season one – Hostage Crisis.

“A secret shared is a trust formed.”

Danger looms! Despite recent victories in the Outer Rim, criminal minds plot at the very heart of the Republic!

The bounty hunter Cad Bane has assembled some of the deadliest criminals in the galaxy and plans a daring attack to seize members of the Senate. What can be the aim of this despicable act?

As first appearances go, the arrival of Cad Bane takes some beating and as he entered the story with the 22nd and final episode of the debut season of The Clone Wars there was little doubt; our heroes were about to encounter a character that would be no easy pushover. Indeed, this episode sets the stage for the second season, The Rise of the Bounty Hunters, bringing with it not only Cad Bane but also Aurra Sing from The Phantom Menace, voiced by Jaime King.

The plan of Bane is simple, to free ganglord Ziro the Hutt from his Republic capture on Coruscant. To do that, Bane, his IG-86 droids and Sing take hostages, using them as leverage in order to get Ziro released, and they’re not taking any prisoners either. Senator Philo is shot in the back as he tries to escape, but once Bane realises Anakin Skywalker is in the senate building, all Fornax breaks loose.

As ever there are subplots bubbling along, and this episode reminds us – and it’s easy to forget at times – that Padme and Anakin are indeed married, and here the young Skywalker is hoping to take Padme away for a break, somewhere no one knows them. Ever pragmatic, Padme knows that’s not possible, the pressures on her time too great as they have important matters to tackle, including the Enhanced Privacy Invasion Bill. Anakin is keen to show his wife how much he trusts her, leaving his lightsaber in her care (and once again ignoring his master Obi-Wan’s plea to keep his weapon protected) and as hooks go it works well as Padme pockets the blade for safe keeping as her father Bale Organa enters the room.

It’s an obvious plot point, to take away Anakin’s lightsaber; surely with it in hand he’d make short work of Bane and co, but without it and relying on his own wits and skills makes the ‘game’ that much more interesting, and as Bane gets the upper hand, eventually freeing Ziro and escaping into the Coruscant traffic, there’s a definite change in tone as the Jedi now have another thing to worry about other than the ever growing threat of the Separatists. Bane is focused, lethal, one step ahead and a worthy adversary. Given his almost Thrawn-like forward thinking, it’s still a surprise that he hasn’t translated into other shows, or even live action. As threats and adversaries go, he takes some beating.

We can’t sidestep one of the most divisive Star Wars characters of the last decade, Ziro the Hutt. A character very clearly styled on the novelist Truman Capote, his flamboyant, outlandish presentation distracted many from his sly, devious character who while often appearing to be startled and fearful was reading the room as deftly as anyone else. Certainly it was distracting; a nod to such a notable mid 20th century character as Capote feels like a shorthand more suitable to an audio book rather than an animated, ‘living’ character, and as such Ziro goes down as one of the more divisive characters in the canon.

So, what to make of this first season and the film that preceded it? Looking back, as many of these season one reviews have, interspersed with reviews written for Lightsabre.co.uk back in 2009, it’s clear to see the huge steps the team  – both written and visual – took as they bedded themselves into the characters and the era of the Clone Wars. By 2008 we were almost a decade into the prequel era, and 6 years beyond Attack of the Clones, the launch point for the series. George Lucas had spent decades hinting at what was to come, and now thanks to Lucas and Dave Filoni we were finally getting it. As later seasons would reveal, we would take twists and turns as we rolled through the three years between Clones and Revenge of the Sith. What Hostage Crisis did so solidly was lay out that new beginning just as we rolled out of the first season of the show, setting the foundations for numerous distractions – many orchestrated by the puppet master Palpatine – that would cause all manner of issues for our heroes. Bad for them, but fantastic viewing for us.

Star Wars Adventures: The Clone Wars - Battle Tales
$13.49
Buy on Amazon This is a paid link. Learn More. Clicking the link may take you to the Amazon store servicing your country Price incl. tax, excl. shipping.  Details correct as at: 2021-05-16