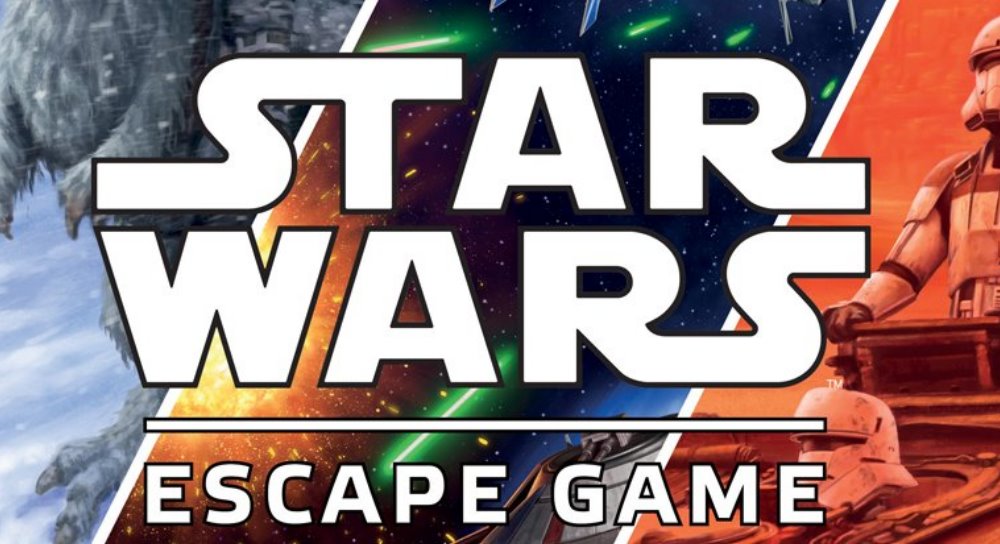 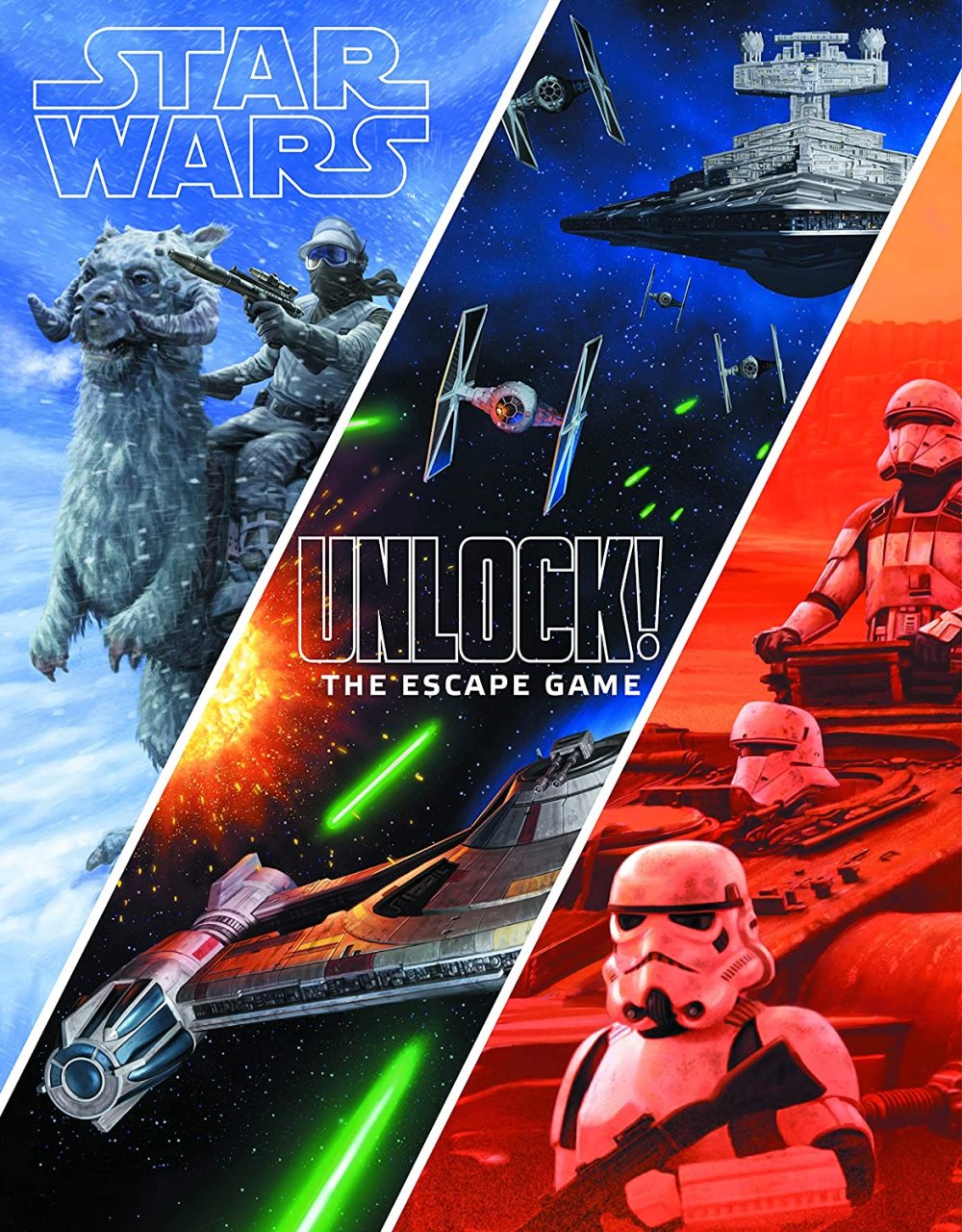 As rebels, smugglers, or imperial agents, search locations, combine items, use ships, weapons, interact with droids and machines in these three 60-minute adventures.

Real-life escape rooms challenge you to literally escape a room within 60 minutes. With UNLOCK! experience the same thrills without setting a foot outside. Powered by the multi-awarded Unlock! game system (over 1 million copies sold).

Three intergalactic adventures! An Unforeseen Delay: You’re locked in the cells of an Imperial Destroyer and you’ve got to find a way out and evade the Empire! Escape From Hoth: The Empire forces are attacking the Rebel base on Hoth. Flee through the frozen wastes and leave this doomed planet! Secret Mission on Jedha: A criminal has stolen a precious artefact and crashed on Jedah, a desert planet.

Bring it back and no disintegrations, please!

Until Covid/Corona raised its ugly head, the cool thing to do as a team kick-off event in Stockholm was Escape Rooms. For anyone who does not already know what that means, you and a group of friends are locked in a room. You then have a certain amount of time to solve puzzles which will eventually lead you to unlocking the door and getting out of the room.

A couple of weeks ago, I changed jobs within the company I worked for and that meant leaving my old team behind. Being the nice bunch of people they are, they bought me a parting gift and, much to my surprise, it was a Star Wars thing that I didn’t even know existed! Unlock! The Escape Game: Star Wars edition. In short, it’s a card-based version of an escape room that you can play in the comfort of your own home. 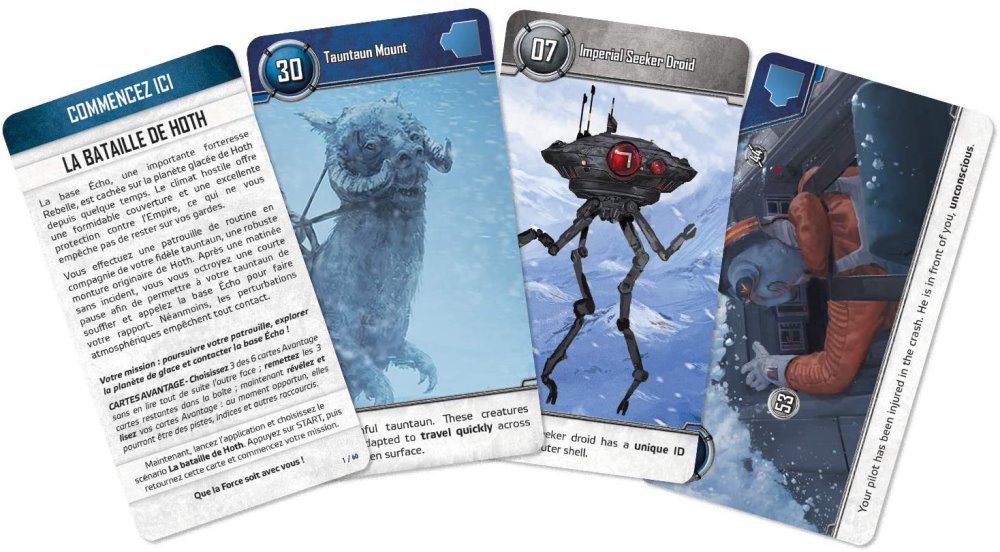 I wasn’t sure what to expect but my wife, our 11-year old son and I sat down to give it a go over the weekend. I have to say that I was pleasantly surprised!

Upon opening the box, the first thing that struck me was the two instruction books. I hate reading instructions! I hate it even more when I have an 11-year-old hassling me to start playing. That made me super happy when just about the first thing I read was, “The tutorial can be played before reading the game rules.” Woo hoo! Let’s get playing. Within about 5 minutes of opening the box I had installed the companion app (available on App Store and Play Store), opened the small 10-card tutorial and we had started playing.

You can play through the tutorial in about 10 minutes and it gives you all the basics for play. As soon as we cleared that we jumped into the first of three adventures, Escape from Hoth. Here you play a Rebel soldier trying to escape Echo Base during the Imperial attack seen in The Empire Strikes Back.

You start each game with a short description of the scenario and access to a few of the cards in the deck. You also have a limited time with a timer running in the game app. To add a random element to the game, you choose three out of six assistant cards which give various benefits such as time bonuses or special abilities. 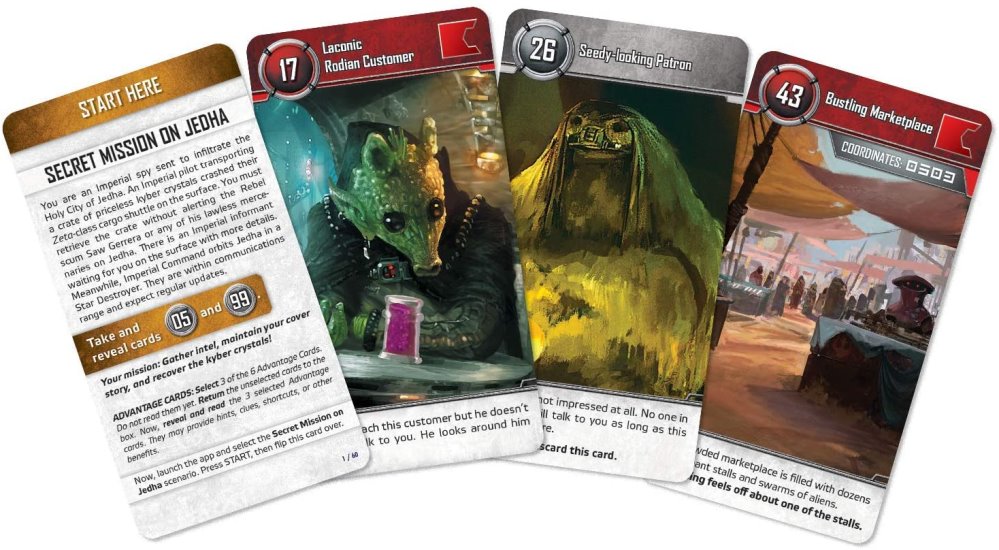 Reading the cards and following the clues leads you to more cards. Sometimes you interact with the app entering codes or performing operations on machines but most often you simply follow the clues. I say simply but it’s not that easy. Some of the clues are pretty cryptic, some cards have information hidden on them that you will not see if you don’t look very carefully and a couple of times we just got lost! When that happens you can ask for a hint from the app. Enter the card number you are stuck on and you get a hint first and, if that doesn’t help you enough, you can then get the solution. Each hint gives you a time penalty.

Eventually you work out a code which you enter in the app and escape.

All in all, I thought it was a really fun game. The other adventures are An Unforeseen Delay where you play a smuggler and Secret Mission on Jedha where you join the might of the Empire. I haven’t played those yet, but I will provide an update when I have. 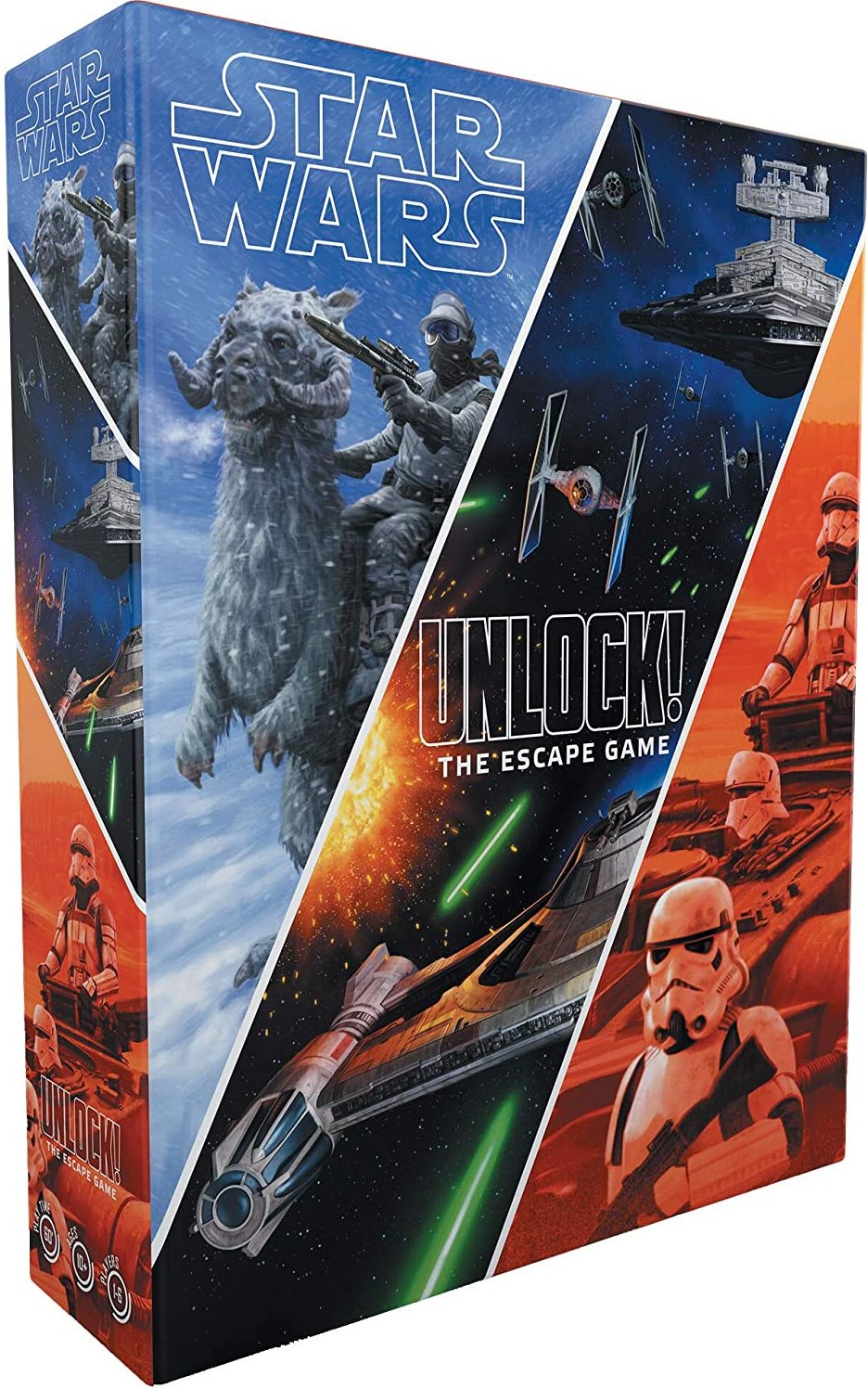 The box says you can play with up to six people. As three, we all had something to do and were not always talking over each other. Personally, I think that four would be the maximum. After that it’ll become hard for everyone to contribute equally.

One of our favourite things is that the game is cooperative. You are in it together rather than competing against each other. This makes it much easier to play with a range of ages and abilities. In fact, there were several times when my wife and I were totally stuck, and our son saved us.

As I said before, I hate reading instructions but was doubtful that the tutorial would be able to teach us all we needed. During the first two adventures we only had to refer to the actual instructions about twice and both times was more to make sure we had understood correctly (which we had).

Speaking of instructions, I mentioned that there are two rule books. Actually, upon further investigation, I found that one is the game rules and the other is a complete walkthrough of all three adventures. So far I have not needed to use that at all because the hints in the app are enough but what I have seen online suggests that the book explains a bit more about how you should do things. I think the best way to use it would be to take an app hint, then the app solution if you are still stuck and only then go to the book if you are still not getting anywhere. 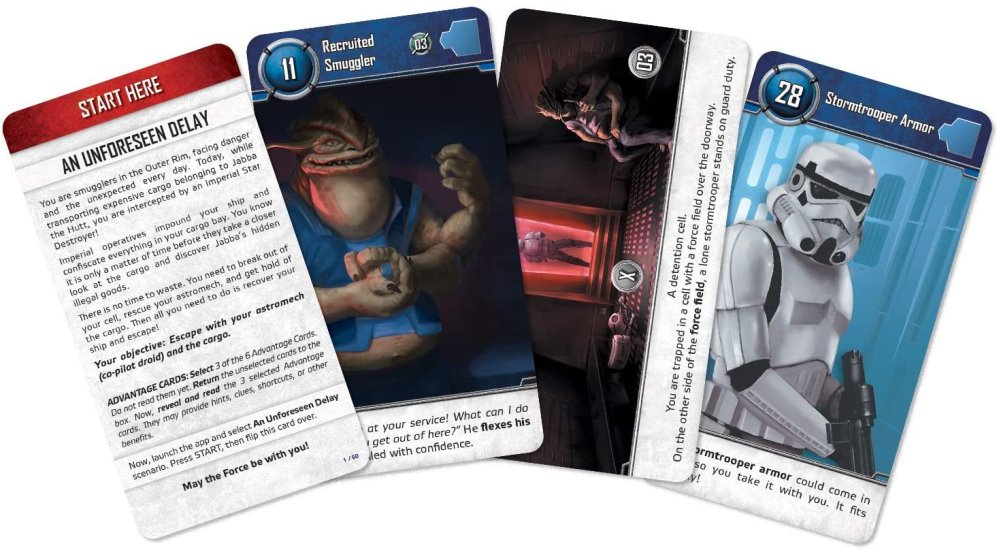 One thing I did not like as much is the music in the app. For some reason they have not used the original Star Wars music. Most of it is fine and has a similar style to the themes we know and love but then suddenly it began playing World in Union which I recognised instantly. I found it to be a real distraction and kept having flashbacks to the 2003 Rugby World Cup Final. It just didn’t match the game theme at all. If you do not know World in Union then you probably wouldn’t even react but for me it was weird.

And finally, this is a singe play game. Once you have solved it, it’s not going to be as fun to do it again. It’s rather like a whodunnit movie. If you know who the bad guy is, it’s just not as exciting. Given that, is it worth the £30 that Amazon charge for it? Well, so far, I have to say yes. It is a maximum three hours of game time depending on how fast you solve each clue so cheaper than a trip to the cinema and, once you have played, you can pass it to a friend and they can enjoy it before passing it on and so on.

Star Wars: Unlock!
$48.74
Buy on Amazon This is a paid link. Learn More. Clicking the link may take you to the Amazon store servicing your country Price incl. tax, excl. shipping.  Details correct as at: 2021-05-08