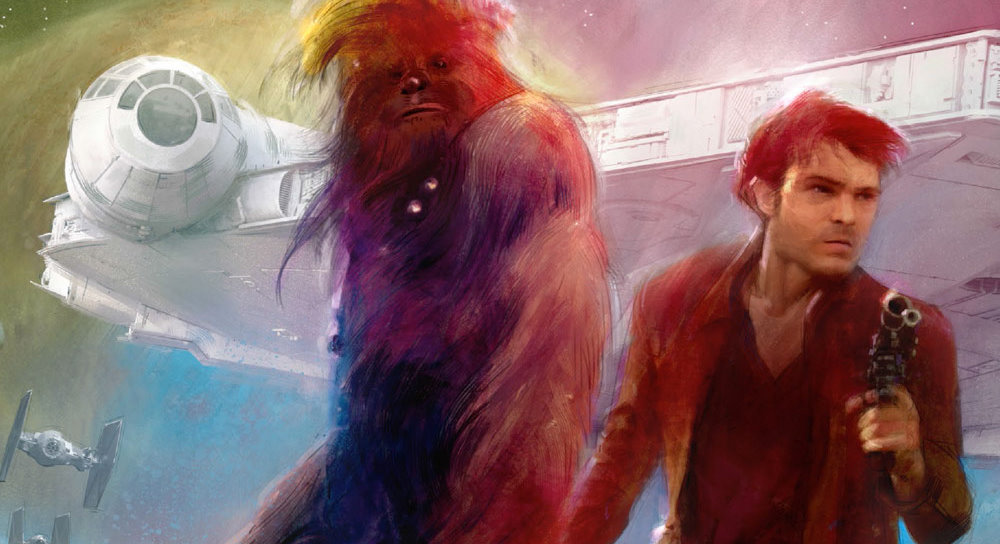 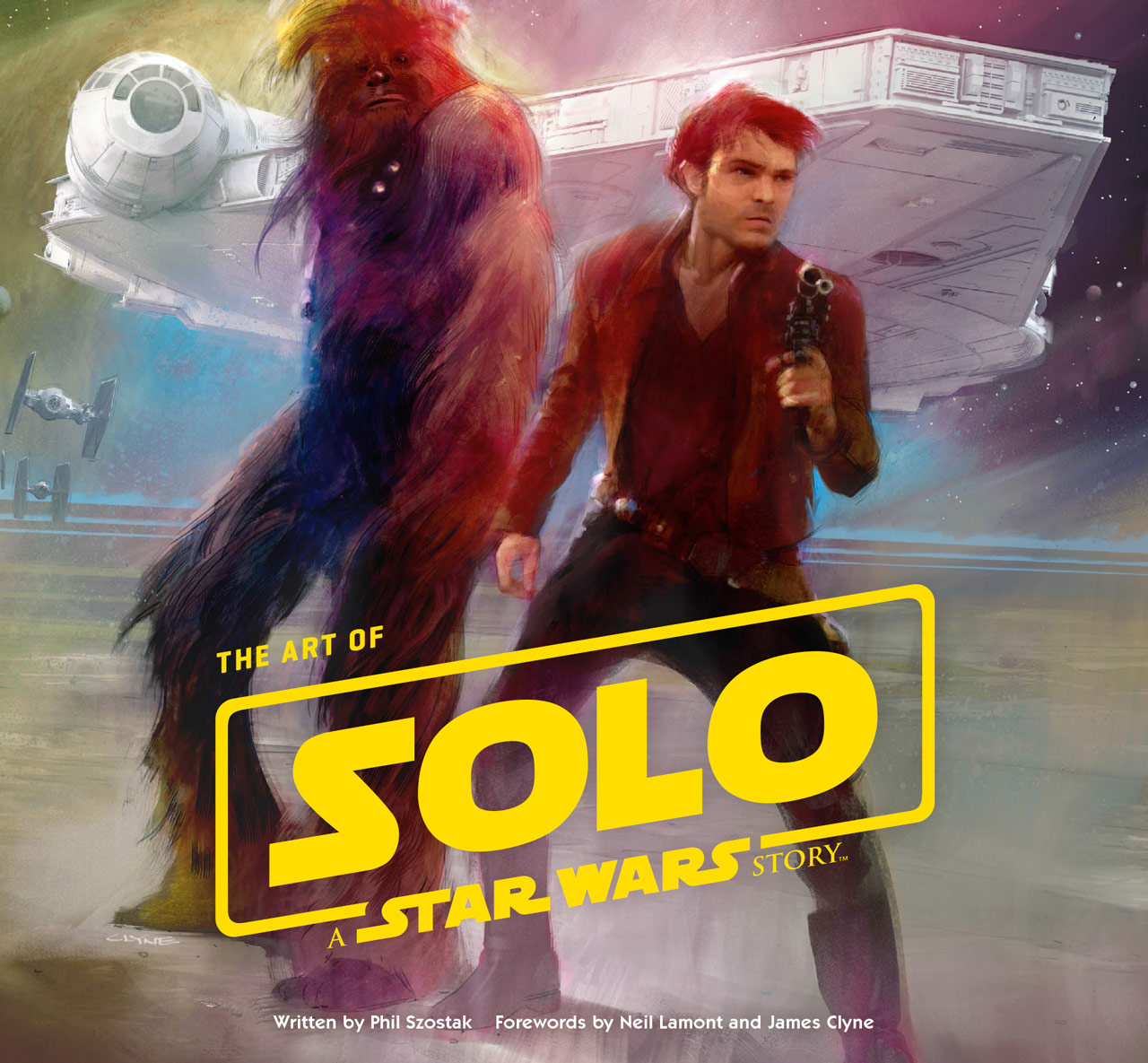 The Art of Solo: A Star Wars Story reveals, for the first time, the design evolution of each new fantastical set, otherworldly machine, and unforgettable character in the film.

Packed with hundreds of spectacular images, including production paintings, concept art and sketches, storyboards, and matte paintings, The Art of Solo: A Star Wars Story is the definitive guide to the art of the film—and a must-have keepsake for fans. 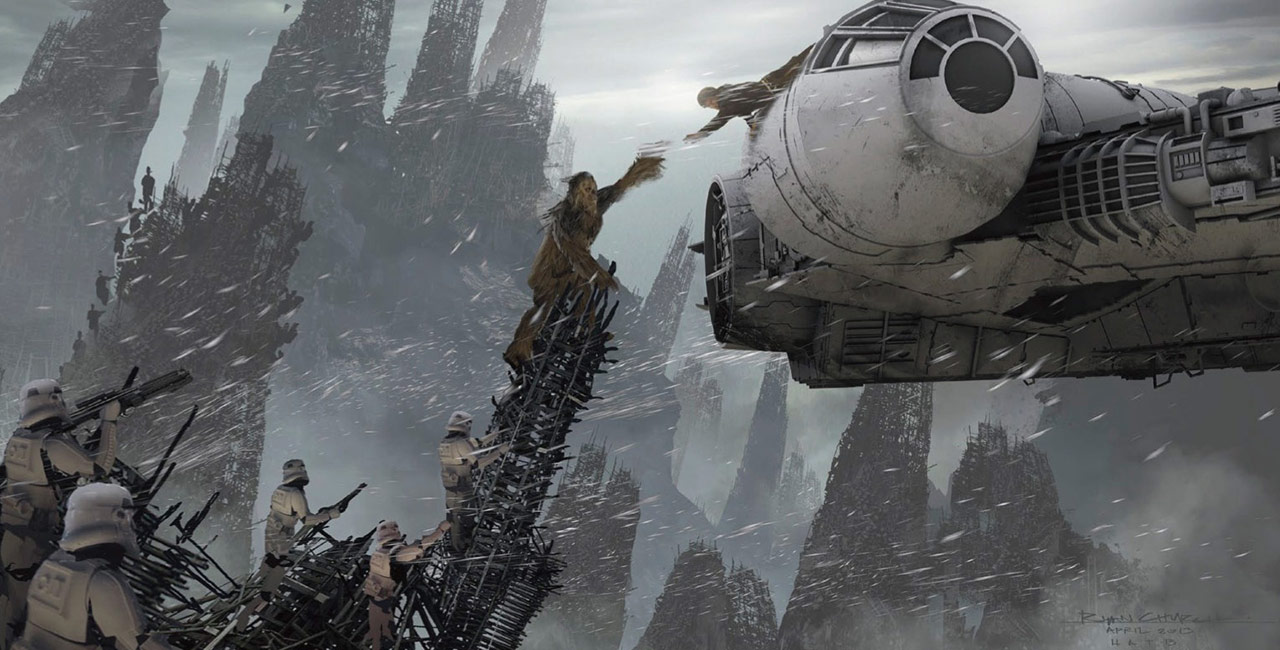 Solo: A Star Wars Story has opened on screens across the planet, delving into the past of Han Solo in a thrilling adventure that not only excites but brings a smile to the lips. The production team and directors have done a magnificent job of crafting this dazzling action adventure, and that’s inspired by the depth of design on display in the latest Art of book by Lucasfilm’s Phil Szostak. To say that the production had plenty of choices when it came to the look of the film is an understatement. Put simply, The Art of Solo: A Star Wars Story is a feast for the eyes. 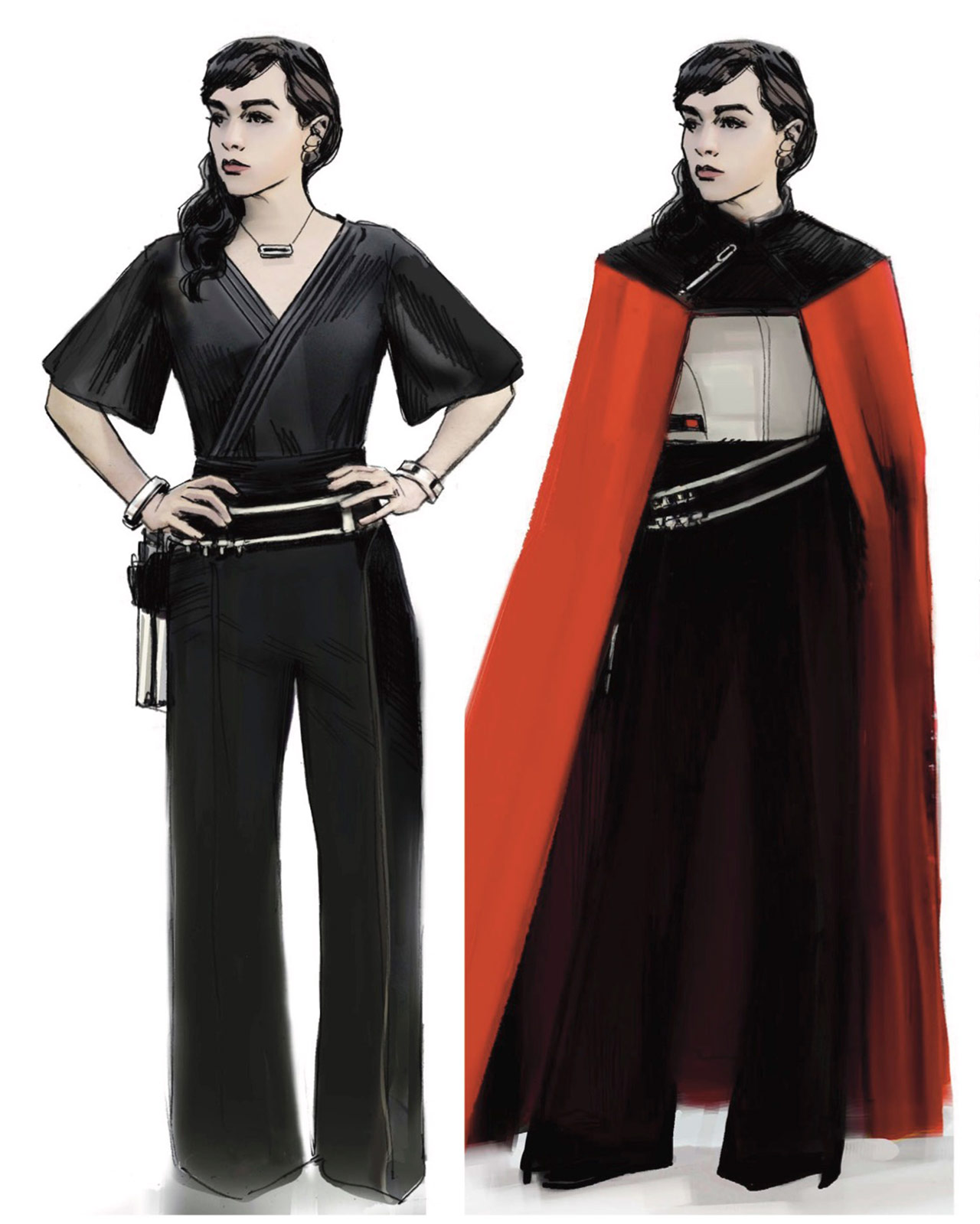 The book rolls us through locations, creatures, groups and characters from the film, starting with Han himself. Solo is obviously informed by his original trilogy incarnation, but also by unused elements from Revenge of the Sith, where we would have met a young street urchin version of Solo. Through the various outfits we see Han wear (he’s become quite the Padmé in this regard) the character develops into one more familiar.

We meet Qi’ra, Han’s Corellian lost love and a variety of designs, including some early alien designs much Han, who was originally meant to be a green-gilled alien in the 1977 original, and a spelling change – she is listed initially as Kura. Again, as shown by Glyn Dillon’s striking designs she has a number of costume changes, showing the passage of time and location.

We get a good look at Lady Proxima and Moloch, skulking deep in the darkness of Corellia, as well as the fierce Corellian hounds. Initially known as Harry and the Boy, the film was being designed and written alongside what would have been the first crack at a Boba Fett film, written by Simon Kinberg. Thankfully, Solo managed to find the way out of the Maw on to the big screen as we learn just how crazy a time period the project was developed in, with Solo, Fett, The Force Awakens, Rogue One and The Last Jedi all in various stages of production. 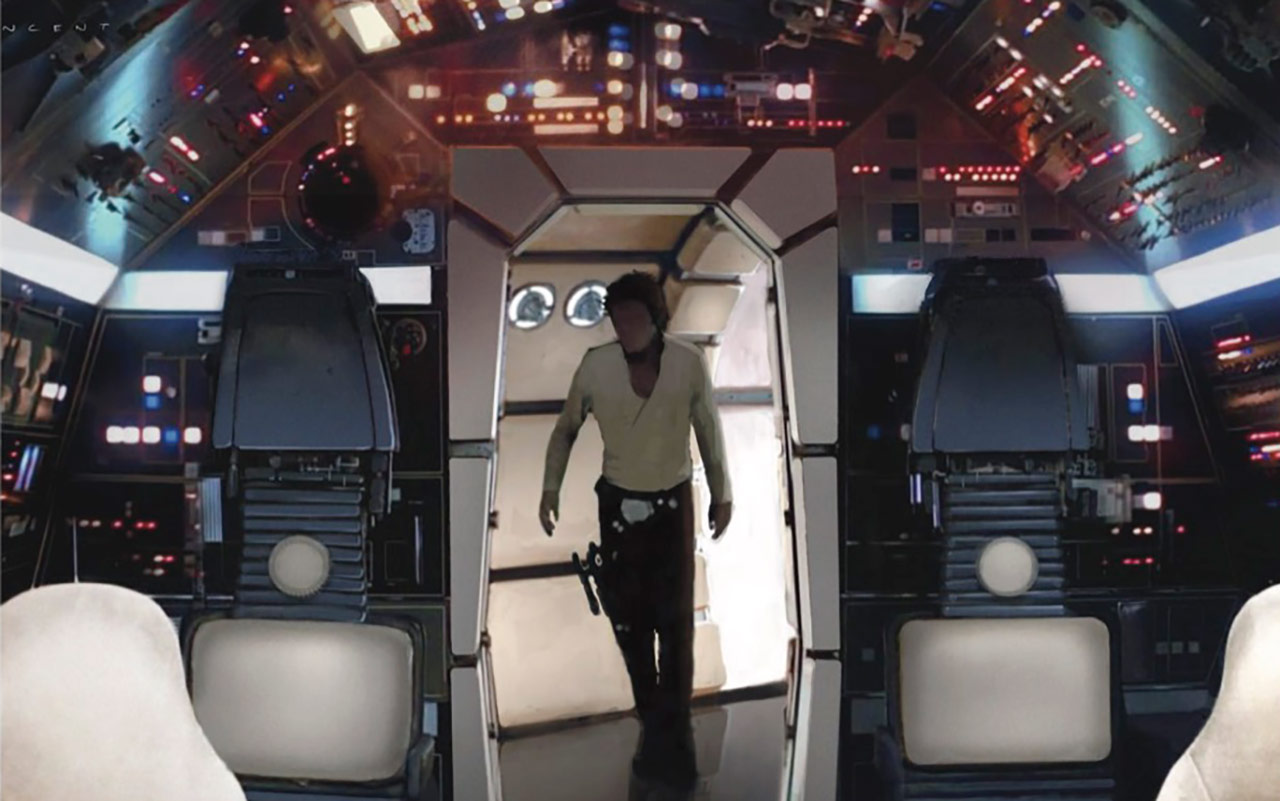 Corellia, Savareen, Kessel, Mimban, all are explored along with the characters, vehicles and creatures that they introduce. The Imperial army and fleet are expanded, just as they were in 2016’s Rogue One, and the depths of the underworld Beckett warns Solo about are explored too. We see new versions of the Imperial probe droid and AT-ST in the form of the AT-DT and Viper Droid. We see a wide variety of designs for Dryden Voss, most of them beginning with him as an alien (at one point Dryden was almost a Lasat like Rebels hero Zeb Orrelious) before morphing into a more human form. 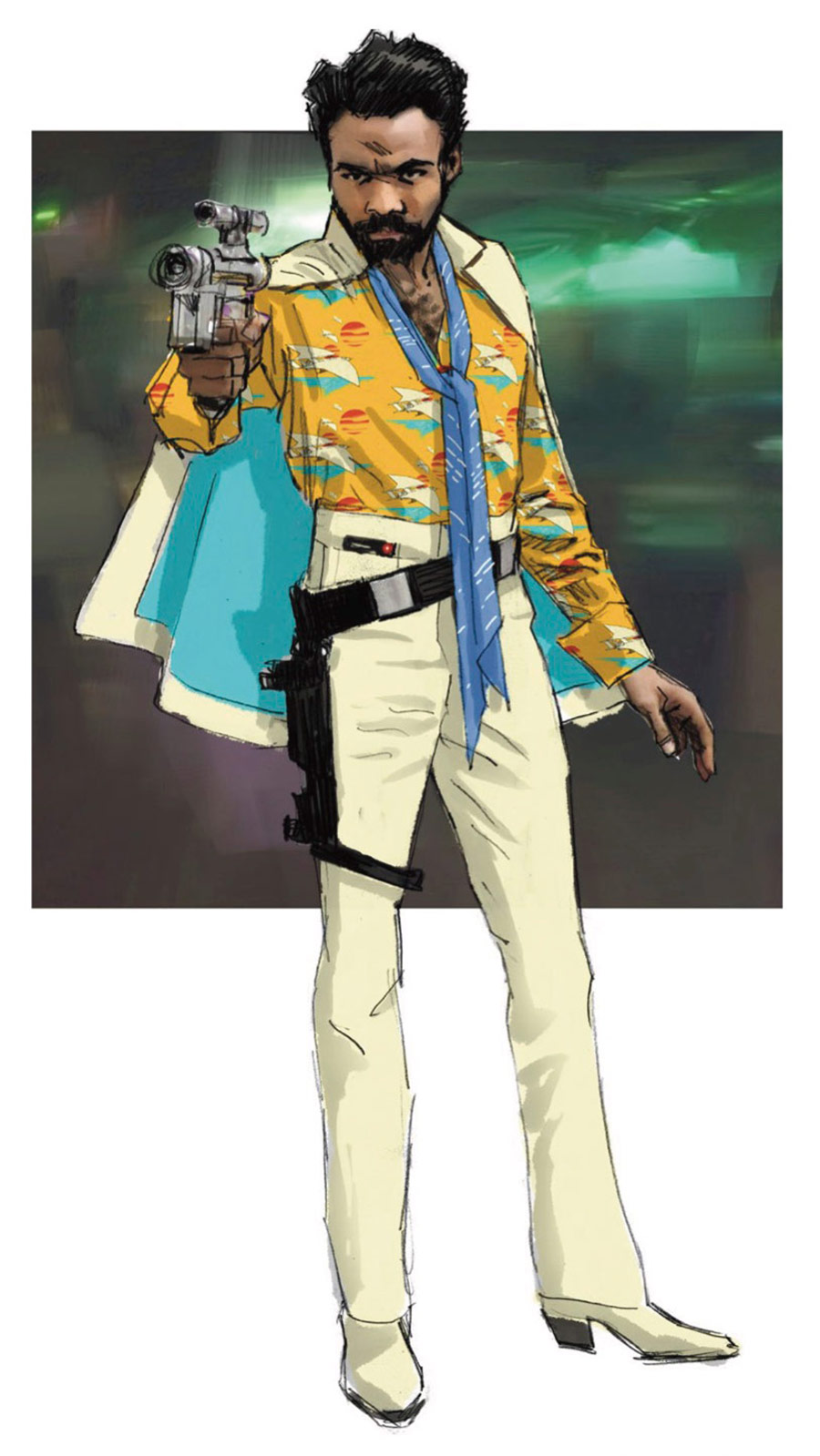 How can we not look at Lando’s colourful wardrobe, and the many different iterations of the Millennium Falcon. We were so close to brights red flames and go faster stripes on the fastest hunk of junk in the galaxy, along with a multitude of different escape pods at the front of the freighter. L3-37 went through a variety of changes before becoming the feisty, socially conscious droid we already know and love while the interior of the Falcon….well, let’s just say it’s a shame Han wasn’t more aesthetically conscious as the Falcon looked beautiful.

Being a fan of the film, it’s easy to be receptive to the aims and goals of this book and the film it chronicles. The 60’s and 70’s aesthetic is the blueprint for Solo, not the more modern iPhone sheen of the sequel trilogy. The worn out, tired, rusty look of A New Hope has never been as well duplicated as it is here and Szostak has done a top notch job of documenting the many elements that went into bringing the film to the screen. Anyone with even a modicum of interest in the second Star Wars standalone needs it on their bookshelf.

Many thanks to Abrams for the free review copy.