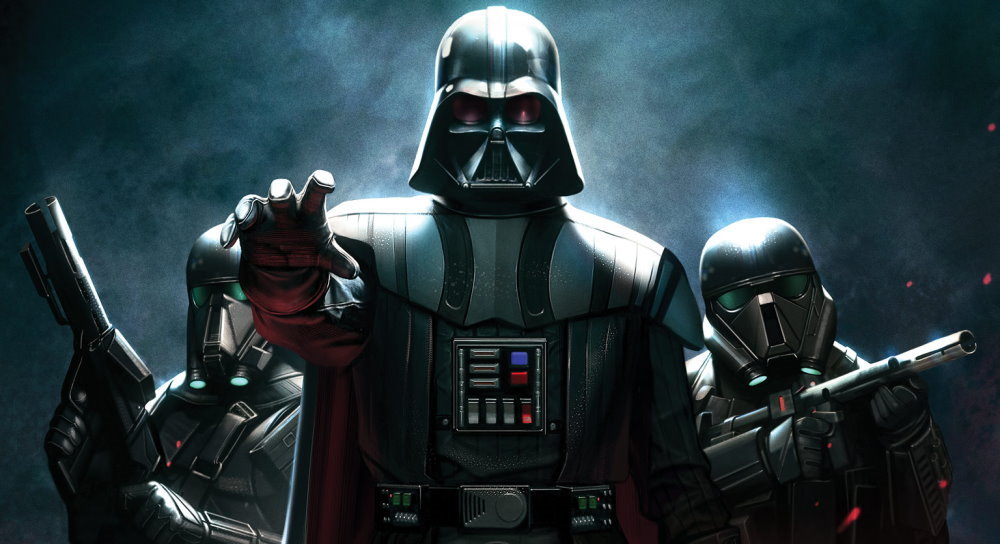 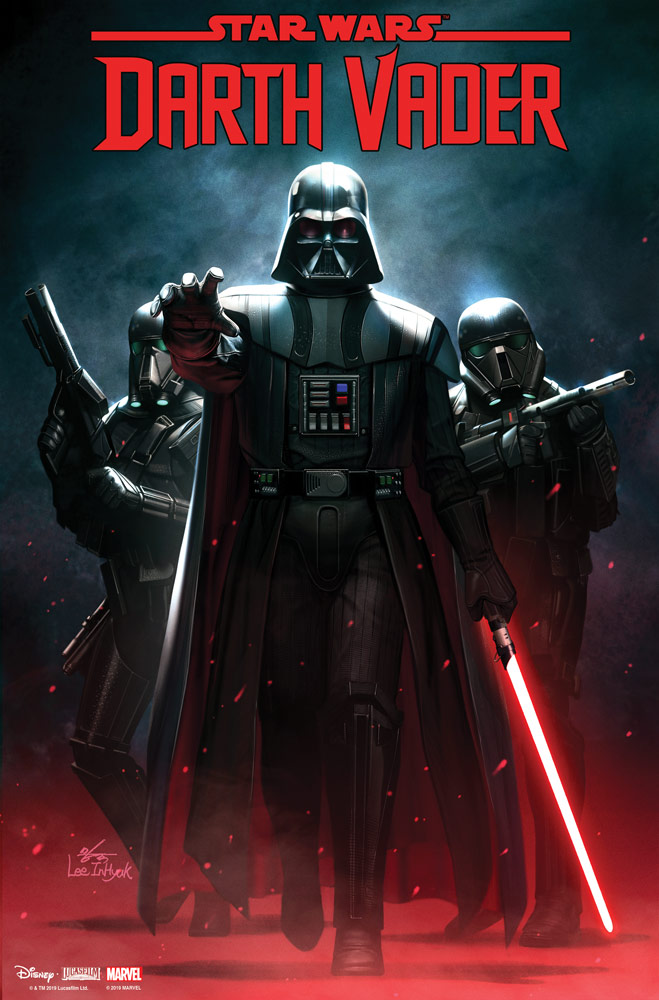 DARK HEART OF THE SITH
Part I

Darth Vader failed to turn Luke Skywalker to the dark side. Luke escaped but now knows the truth.

He is Darth Vader’s son.

For the first time in many years, Darth Vader’s path is uncertain….

As the third on-going focused on Darth Vader since the 2015 Star Wars returned to Marvel, you would think that perhaps at this stage that Marvel are over doing the Vader comics. However, the point at which we join the overall story is at quite an intriguing stage in the story of Vader – right after the events of The Empire Strikes Back and the stunning reveal that Luke is his son.

Writer Greg Pak is no stranger to Star Wars, having worked on the Age Of Rebellion comics (including a Vader issue), and issues of the Star Wars (2015) ongoing – so having his skills join this new Vader ongoing is an interesting proposition.

Artist Raffaele Ienco is new to Star Wars, but fans of Marvel comics may be familiar with his work on the Fantastic Four, and Civil War II, seeing his take on the Star Wars galaxy would also be an interesting journey.

Cover artist InHyuk Lee is also a newcomer to Star Wars comics, and with his background in Marvel Zombies I really didn’t know what to expect from him as the series launched.

Pak launches the series with the now familiar method Marvel have chosen to adopt for it’s main Star Wars ongoings, the “long time ago” line, and an opening scroll.  With an arc title of the Dark Heart of the Sith, it gave me hope that we are going to delve very deeply into the mind of Vader at what would be the most emotional of times since his turn to the Dark Side.

Pak immediately takes us to arguably the most iconic of all Star Wars moments, the moment Vader reveals himself to Luke as his father. Pak gives us this from the point of view of Vader, emphasising the fact that this ongoing will be a deep dive into Vader’s mind – but immediately snaps us out of that moment to begin to shape what this series will be.

We are introduced to Vader’s new Death Troopers and droid Zed Six Seven boarding Vaders’ shuttle and leaving behind the Empire, whilst Vader himself avoids having to speak with The Emperor. This is something that stamps a degree of defiance and power on Vader, but with the Emperor laughing makes you consider the larger plot at play. It’s a great little play by Pak to empower his lead character, whist leaving a subtle underplot of what games The Emperor may be playing to be explored. Intriguingly, in one fleeting moment Pak links the prequels through Grand Vizier Mas Amedda, the Star Wars story films with the Death Troopers of Rogue One fame and the original trilogy – it is an immediate stamp from Pak to highlight his Star Wars credentials, and a nice nod to fans of the franchise.

Surprisingly, Pak takes us on a sudden and unexpected journey back to Tatooine, Vader’s childhood home planet. He swiftly imposes Vader’s dominance over the local Imperials which again highlights Vader’s power, as well as giving a high level of aggression to the Death Troopers. The new droid Zed Six Seven becomes our effective narrator, allowing Vader to retain his ominous level of considered silence. This is a fantastic move by Pak, as Zed Six Seven narrates our journey through the Lars Homestead and its history and connections to Vader. All the while Vader walks through the rooms, silent. It allows the reader to think deeply into what the emotions of Vader must be in these scenes. There is something quite powerful to the panels as we contemplate what Vader must think.

I also admired Pak’s choice to bring us flashbacks to famous moments and quotes from the Lars, young Anakin, Shmi, and Padme. Most impressively he also allowed us to relive the darkest of moments for young Anakin – the moment he slaughtered the Tusken Raiders, but lightened it by sharing the tenderness Padme expressed towards his. That moment of pure dark and light in his love for his deceased wife and mother, and intertwining his spiral to the dark side were superbly written. Linking and creating a parallel vision of his attempts to have first Padme, then Luke join him in creasing power was very clever, and well played out.

Haven taken us on an emotional journey with Vader as he looked for clues to whom helped keep Luke a secret, Pak then turns things on a head to remind us of how sinister and brutal Vader can be – having him destroy with absolute rage a local group of bandits who tried to mug him. It was a nice switch to allow us to be emotional for Vader, but then quickly reminded of his level of violence. Was it necessary however; I have my doubts. I think the comic would have been better served without this distracting plot element.

As quickly as Pak took us to Tatooine, he takes Vader and Zed Six Seven to Coruscant where they break into the sealed off former apartment of Padme. Inside they find a tracking device sending information to someone on the planet Vendaxa. From there Pak delivers his end of issue twist; inside Vader comes face to face with someone whom appears to be Padme herself – as impossible as that could be…

Overall I felt Pak comes out firing on all cylinders in this first issue. Taking us to Tatooine, to the Lars Homestead, serving up some emotional flashbacks, then to his wife’s Coruscant apparent and finally a face to face with what appears to be his dead wife. It’s a lot to fit into one issue, and overall I felt some of it was quite jutting to the story. For something as crucial as a visit to Tatooine, it should have been built to and substantial time spent there.  It felt too sharp in its appearance, and rushed in its execution. The same can be said for Coruscant, where little time was spent. I feel Pak wanted to deliver an explosive first issue, and he did, but perhaps pushed the envelope just a little too far and fast.

Raffaele Ienco really delivers in this issue, making it truly feel like the Star Wars galaxy. His ability to so accurately capture familiar characters and scenes from the movies, and meld them so sleekly with the new imagery and characters really aided the flow of the comic as we moved between present time and flashbacks. In a franchise like Star Wars where characters and locations are so iconic, there is a real need to deliver on character studies and the depth of vehicle, and architectural work to not only reflect what we know but meld in that which is new. Ienco delivers superbly on all counts, his character depictions are a particular joy.

In a Vader ongoing, it is of utmost importance to deliver on such an iconic figure as Darth Vader. Again, Ienco delivers. There is wealth of detail and accuracy to his drawings of Vader and his suit, and I would go as far as to say they are some of the best Vader imagery in comics ever.

Accompanying Ienco’s pencils is sensational colour work from Neeraj Menon. The rich red wash to Vader’s memory of what happened in Bespin. The sun burnt rich oranges of Tatooine, the bright colours of Mas Amedda, the beautiful wash to the prequel flashbacks – each delivered with great skill. He creates a lovely textured feel to the comic, which means we get a very cinematic feel to the comic. Gradients and shades are used with such skill that it really brings out a mix of joy and fear to a very atmospheric issue.

InHyuk Lee surprised me with his cover art, having seen his previous work it was nothing like i expected. A rich poster effect, wonderful use of texture and light, and with a modest flash of rich red colour. It really capped off the issue well, and reflected well the mood of the series.

Overall Darth Vader #1 has delivered an impact to make the ongoing a must-buy. It has cleverly merged the prequels to the original trilogy, giving us the scope to explore the entirety of Vader’s life. Its use of a droid narrator allows Vader to retain his air of mystery, whilst encouraging the reader to explore his mindset. With an interesting twist to end out the issue, Pak has quickly established an unexpected nature to the tale. Ienco and Menon have added to Pak’s tale with wonderful narrative art, detailed accurate character and environment studies rich in colour, texture, gradients and shade. I look forward to reading issue two.