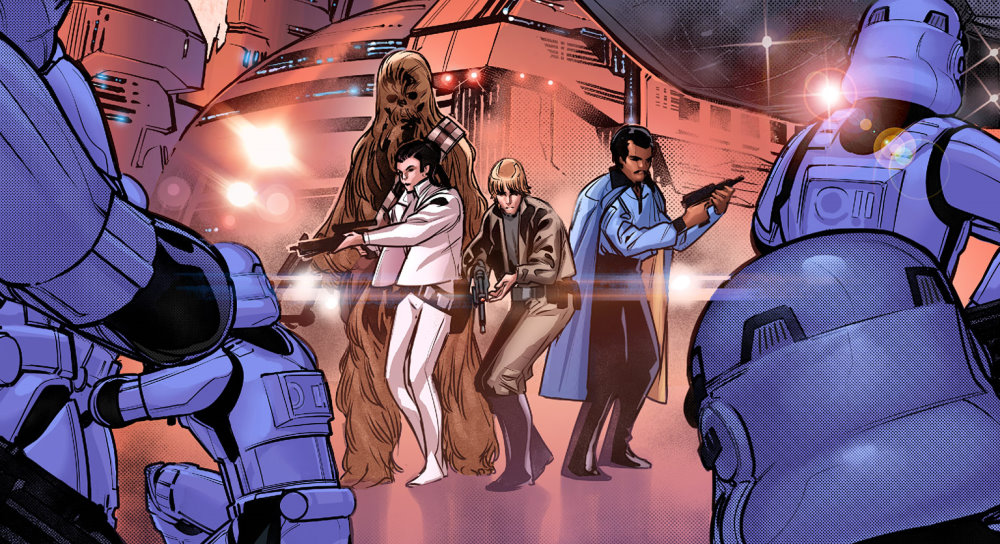 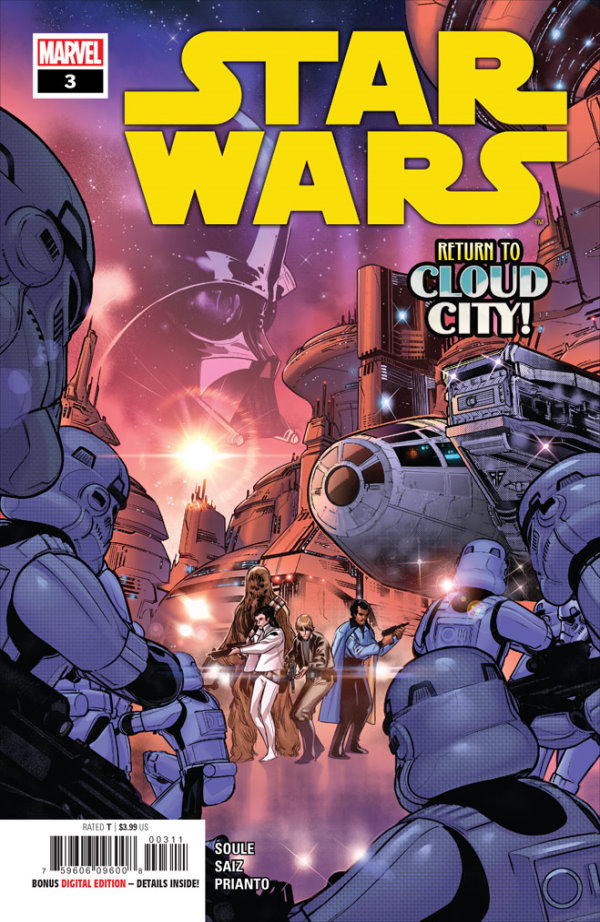 The Empire has broken the Rebel Alliance’s security codes and is using this advantage to expose and destroy their dwindling forces.

Luke Skywalker and Princess Leia narrowly avoided Darth Vader’s trap on Cloud City. But Han Solo was taken by the bounty hunter, Boba Fett, and Luke learned that Vader may be his father.

Luke’s path is now uncertain. Strange visions of a robed figure with his lost lightsaber compel Luke to return to Cloud City with Leia and Lando Calrissian to retrieve the blade….

We open issue three with an Imperial victory as the last remnants of the Alliances 6th Fleet is destroyed by the ISD Tarkin’s Will. An unusual name for a Star Destroyer, but one that is explained as Commander Zahra explains to a surprised second-in-command Lieutenant Gorr just why the vessel exists in the state it does. We learn that the ship was damaged in the Death Star explosion near Yavin – interesting new information as nearby ISD’s have never been discussed before, but a fleet of ships flanking the battle station makes good sense – and when Zahra was placed in charge of finding the fleeing Rebels she was offered any ship and chose the ISD Fortitude, changing its name to Tarkin’s Will and crewing it with officers who had all lost someone in the Death Star explosion. It’s a superb opening to the issue, giving intent and purpose to the Imperials aboard, beyond a blind and fanatical devotion to the Emperor.

We swing from the Mid Rim (whereabouts in the Mid Rim isn’t indicated, which makes it as useful a geographical indicator as describing an airplane as being ‘somewhere in the air’) to Bespin as Lando, Luke and Leia head for Cloud City and Luke’s lost lightsaber, which Lando is convinced they will easily locate. Navigating entry past Twin-pods and Imperial security isn’t easy, but Lando uses his charm and knowledge of the mining facility to deactivate the gun batteries (which look exactly like those found on the Death Star) using his wrist gadget we saw much closer in The Rise of Skywalker and land. Evading more troops the three go their separate ways, Luke to find his saber, Lando to ‘settle an old debt’ and Leia towards the carbon freezing chamber where Han Solo was frozen. Ironically, carbon freezing is the fate that awaits Leia as she is stunned by Imperial troops and frozen as Lando evades Imperial attention after finding Lobot and venting Tibanna bi-products back out into the atmosphere and Luke enters a huge junk room to find his saber…

This is a mighty attractive comic to read through, with design and execution top notch, evoking Marvel of old while being presented in a contemporary fashion. The colours pop, while the script zips our characters around Cloud City on their individual tasks. Bespin is always a great location and while the first 3 issues have already seen us head to Bespin and Tatooine, the way this issue is drafted more than makes up for that. Luke wanting his father’s saber makes sense – his Jedi training isn’t to the point where he could consider making his own replacement yet, and Leia wanting to keep Lando in her sights also rings true. As for Calrissian, naturally he’d want to get back to Bespin and his city, and again harkening back to the classic ’81 era, Cloud City kicks back hard.

After that uncertain first issue this series is really finding its feet and while there are some gripes, but minor ones. We’re looking at a series that ‘feels’ Star Wars, but more than that, is moving towards the feel and atmosphere of that golden era between Empire and Jedi. Today we know far more about the galaxy than we did back in 1980, and it’s hard not to unconsciously refer to things that at this point of time haven’t happened, but right now this title is hitting that sweetest of tones as the search for Han Solo begins and the Alliance start making plans for what would come in Return of the Jedi.