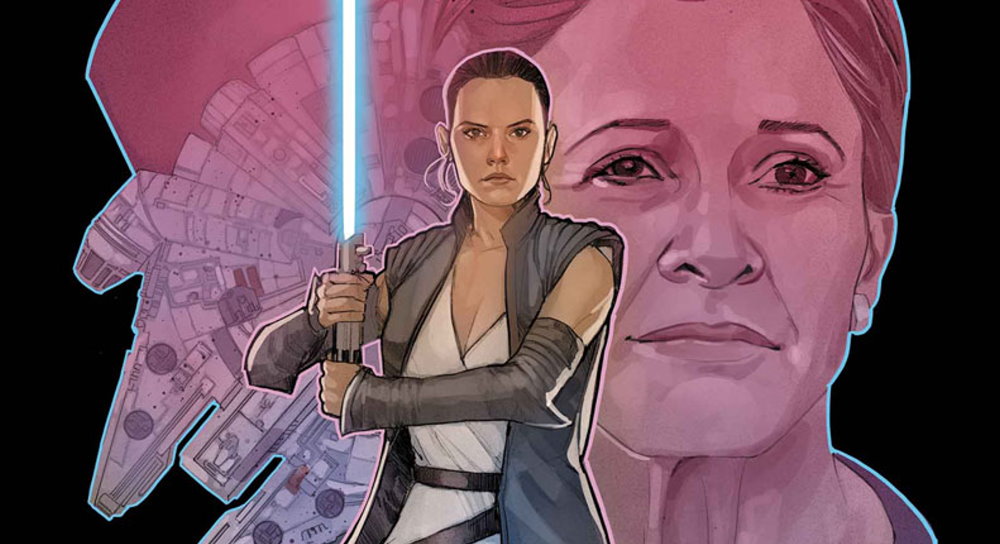 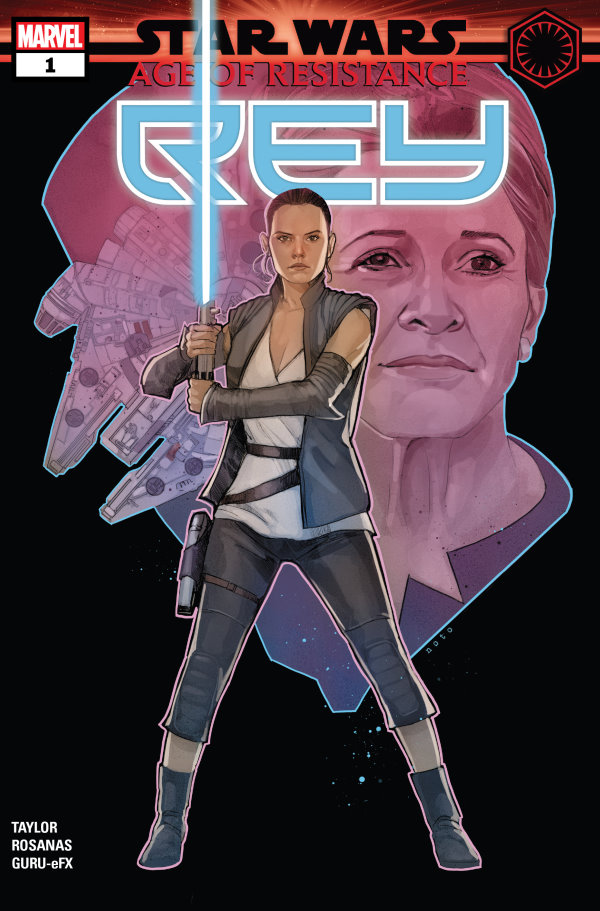 Orphaned on the desert planet Jakku, Rey has lived her whole life alone.

That is, until she joined the Resistance, a band of intergalactic freedom fighters who defend the galaxy from the villainous First Order.

Now she may be the Resistance’s last hope as she works toward strengthening her connection to the Force….

There’s a close connection between The Force Awakens and The Rise of Skywalker, where the two films overlap. As Rey leaves D’Qar and steers into uncharted space she heads for Ahch-To and the long-lost Luke Skywalker, while the Resistance are found by the First Order, evacuating the planet and fleeing into the cosmos as their fuel supplies run out. Of course, dramatic licence could easily mean that these events aren’t happening in the order we see them, but nowhere does it say they’re not, so therefore plenty could have happened on the long, circuitous journey to Ahch-To, and here in the final Age of Resistance issue we learn that something did.

Early in Awakens we saw Rey display her intuitive mechanical skills as she bypassed the compressor on the Millennium Falcon, but this was only a temporary fix and as the Falcon wheels towards Ahch-To, Rey diverts the freighter to a junkyard planet called Necropolis….

All very exciting, but prior to their departure lies the real meat and bones of this issue as Rey sits with Leia, who wants to know in Rey’s words just what she knows of the death of Han Solo. We’ve read of Rey’s abandonment issues, being left on Jakku by her parents (a story finally completed with The Rise of Skywalker) and now as Han departs her life she once again feels that sense of abandonment.

Seeing Leia describe Han, a man who always ran first but never too far, adds another layer to the Leia / Rey relationship and as she departs, as she did in The Force Awakens, we understand better that Rey is far from alone, despite not realising it herself.

The adventure on Necropolis is frankly your standard classic Star Wars fair, very much in the vein of Marvel’s Star Wars #59 from May 1982, Bazarre, when Chewie and Lando landed on the junk planet of Patch-4 and are attacked by a Watchbeast. Rey sets some slaves free, gets the parts she needs (while leaving the junk in a Firespray, one of only 6 ever built with a glass window that pops off just like the Palitoy vehicle) and continues on her way to Ahch-To.

The artwork by Ramon Rosanas is easy on the eye, the cover by Phil Noto a treat as always and the script by Tom Taylor on point, and while the Necropolis portion of the story is pedestrian, that’s not the point of the issue. The story reinforces to Rey just how not alone she is anymore -that she can make a difference – and as she heads to her destiny with her soon-to-be Master Luke she has the hopes of a galaxy with her. Far from being ‘just a girl’, she’s part of something far bigger.