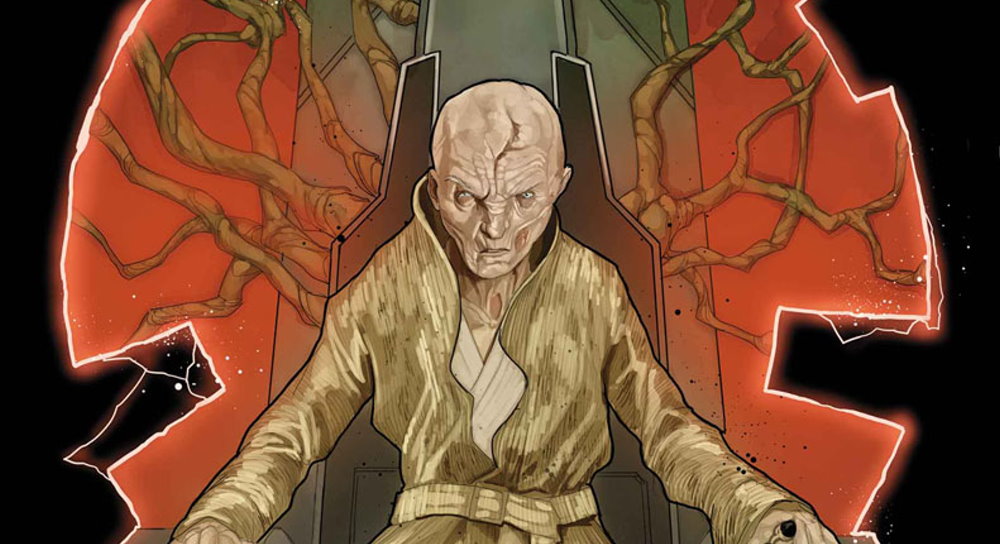 From the ashes of the evil Galactic Empire rises the First Order, a villainous sect of fanatics united by their Supreme Leader, Snoke.

With a promising new apprentice and the limitless power of the dark side of the Force to command, Snoke is poised to crush the New Republic and take over the galaxy….

The conclusion to the Age of Resistance series is not far away and we reach one of the biggest – if not the biggest – mysteries of the sequel trilogy; Supreme Leader Snoke. His training of Kylo Ren is a key element of the new era – how he subverted the power of Ben Solo and twisted it to his own ends – so to see moments of that training and how Snoke coerced Ben should be fascinating, and the issue – written by Tom Taylor and drawn by Leonard Kirk – certainly grabs you by the lapels from the off as Kylo is suspended by Snoke over a vast drop using the Force, and as the gnarled Supreme Leader lets Kylo fall his words echo – “Turn that anger into power.”

We’re earlier in their ‘relationship’ than the sequel trilogy shows, and Snoke is testing the limits of Kylo’s powers. He makes it clear that he wouldn’t have saved Ren from the fall like Luke undoubtedly would have, and then takes him away to the mists of Dagobah, chiding Kylo just as Palpatine had chided Anakin years before. Luke’s power is respected by Snoke, much to Kylo’s surprise, and the elder leader uses that as a weapon to nudge Kylo on even further. If Luke Skywalker had been at his side, the galaxy would be his. What a delicious thought, that Luke and Snoke combined would have the power to control the cosmos just as Palpatine and Vader had a generation before.

Just as Luke faced Vader in the cave, so inevitably Kylo faces Luke, fuelled with rage for what he perceived Luke had done, the goading of Snoke ringing in his ears. It’s telling that Luke fought the dark spirit of Vader alone, while Kylo has the Supreme Leader within earshot, feeding his anger as he slices through spirit Luke and is faced with his mother and father. Snoke cannot see what happens within the cave, can’t see Kylo refuse to kill them – even the spirits representing them, and tears the cave apart using the Force, to the annoyance of Snoke. Interesting that the iconic cave from The Empire Strikes Back is torn apart by Ren, and the final thing he says in the issue when Snoke notes that he’d hoped to bring other apprentices to train there. “You won’t need other apprentices.” How true.

An impressive entry in the series, and one that could easily have steered in the wrong direction, it gives depth to their relationship – the goading, the bitterness, the misdirection – without giving too much away. We know Ben was led astray, by his own internal struggles, the lack of faith his uncle had in his future as a Jedi and his own skills as a teacher, and by the invasive words of Snoke. To see that in action like this adds a welcome wrinkle to these relationships. We might not learn who or what Snoke was in The Rise of Skywalker – in truth, at this point do we really need to know? – but issues like this are a welcome addition to the story.

A great job all round and one certainly worth seeking out if looking for an engrossing ten minute read.

STAR WARS AOR SUPREME LEADER SNOKE #1
$23.48
Buy on Amazon This is a paid link. Learn More. Clicking the link may take you to the Amazon store servicing your country Price incl. tax, excl. shipping.  Details correct as at: 2021-05-13