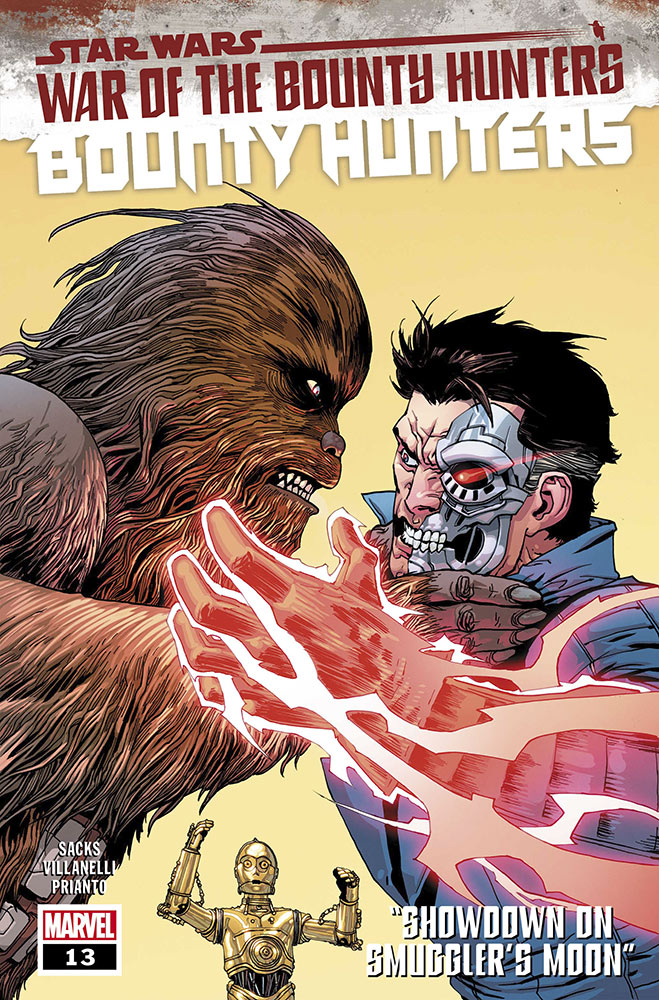 WAR OF THE BOUNTY HUNTERS:

Jabba the Hutt has placed a bounty on Boba Fett’s head!

Valance and Dengar have formed a shaky alliance in order to find Fett first. Valance is desperate to save his old friend Han Solo.

But the odds are against them.

Every hunter in the galaxy will want a piece of Boba Fett.

And Dengar may have an agenda of his own….

There are times this comic takes the subtle route through a story, and there are times it just faces up to the plot and punches it in the mouth, and issue 13 of Bounty Hunters os one of those times. Never one to dilly-dally or tip-toe around a problem, this issue has Valance at the end of his tether, kicking and punching his way to a solution with all the finesse of a rolling pin. At times it’s humourous, at other times tedious, but for a series that rarely dials it down it’s always appropriate.

We rejoin Valanace and Dengar on Nar Shadaa, at the same time the events of Star wWrs #13 and War of the Bounty Hunters #1 are taking place, and as with Star Wars #13 the issue very much feels like a contrivance to fit into a crossover series, with one difference. Whereas Star Wars #13 was mostly a dead end of a story that did nothing to progress the plot, this does bring us a long-awaited confroontation between an angry Chewbacca and Valance, giving the genuinely regretful cyborg the opportunity to explain himself to Chewie and offer to help in the hunt for his former fellow IMperial cadet Han Solo. As Valance punches out Dengar’s carefully cultivated informants (why would’t he, they’re not his informants), it’s a monent of calm within the storm that clearly hits home with Chewbacca after their mammoth, bar-wrecking brawl.

In the B-story we follow T’onga and Losha to Dotharian, not that far away in Hutt space as they attempt to get the Mourners Wail on their side in their own hunt for the missing Cadeliah. They’re greeted by Lord Khamek who insists they leave immediately, but too late as Crimson Dawn arrive. For Valance back on Nar Shadaa the news that Crimson Dawn are back is met with incredulity, but nevertheless the piecs are now in place for Valance to play a much larger role in the War of the Bounty Hunters as an unknown assialant attacks, leaving us primed for the next issue.

It’s bold, it’s busy and it’s crafted with all the care you’d expect from the team of Sacks, Villanelli and Prianto, but there’s something missing from this issue that’s hard to put a finger on. Crossover epics ften suffer from having to wedge in convenient overlaps, and Bounty Huters #13 hits that hurdle too, but the team of Dengar and Valance is engaging enough in a 48 Hours kind of way to get us through and on to the next issue. Enjoyable, but rarely for this title not essential.