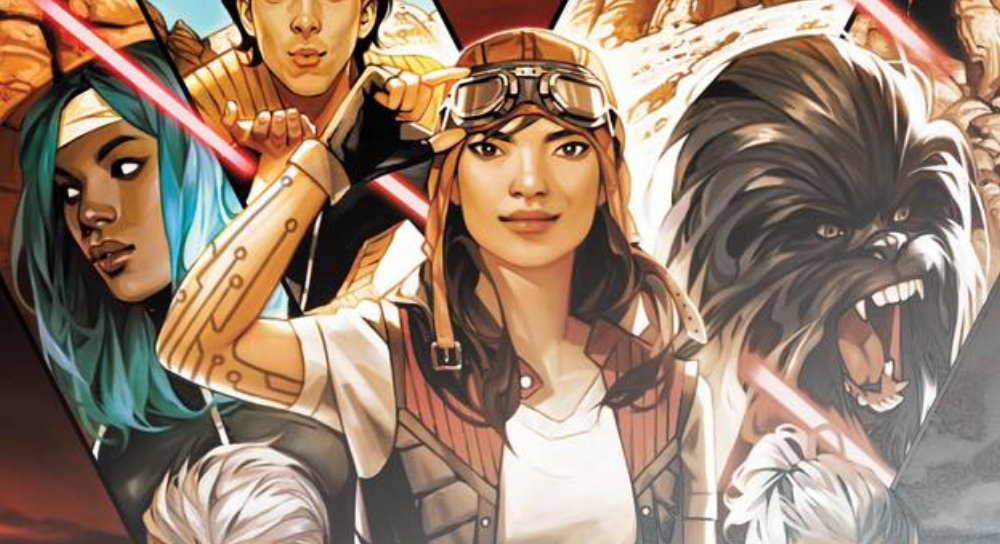 THE RINGS OF VAALE

The heroic Rebel Alliance is scattered and on the run after their defeat by the Empire at the Battle of Hoth.

After narrowly escaping the vengeful Darth Vader and cutting all ties to her past, rogue archaeologist Doctor Chelli Aphra is back on the hunt for the rarest, most valuable treasures in the galaxy.

With Aphra’s cunning intellect and flexible moral compass (plus a new, highly skilled team), the next huge payday is just around the corner. But there are some secrets in the dark corners of the galaxy that not even Doctor Aphra is prepared to uncover…

One of the coolest aspects of the character of Doctor Chelli Lona Aphra is her ability to dust herself off, move herself on and get started on her next score. The opening issue of the second volume of Doctor Aphra – much like the main Star Wars title and the third volume of Darth Vader, set right after the events of The Empire Strikes Back – sees her making hay on Hoth, stealing Rebel contraband from under the noses of Snowtroopers on the ice planet. Aphra, Black Krrsantan, Tubleek Ruz and Just Lucky drop in and cause havoc, nabbing their haul before blasting off in the Ark Angel III to the Shadow University (in the ‘Outer Rim’ – more detail on where these locations are please Marvel) to cash in her haul with Sava Estat (trust me, this is no Indy and Marcus conversation about artifacts, it’s all about the Palpatine’s) and onto a local tapcafe where she’s approached by a seemingly innocent student called Detta Yao who makes her an offer that makes so much sense she can’t refuse.

In return for helping Yao track down the Rings of Vaale, Aphra will take the financial rewards while Yao gets her dissertation, but there’s a slight hitch; Yao wants to include Doctor Eustacia Okka, a former classmate of Aphra who is less than pleased to see her when they arrive at the Ruins of Kolkur on ‘the Outer Rim’ (why bother even saying ‘the Outer Rim’, it’s like asking for directions to the nearest supermarket and being told it’s ‘somewhere in the Solar System’) but is probably more pleased to see her when the goons of Ronen Tagge arrive, insistent that Okka helps their boss find the rings.

As ever, Aphra starts a firefight, using the cover to escape with Okka, Yao (who shows herself to be far from an innocent by coldly killing one of Tagge’s men who grabs her), Krrsantan and Lucky who all get back to the Ark Angel III to firm up their plans. Aphra lays it out in black and white – Okka gets credit for the discovery of the rings, Yao her dissertation and Aphra the money. Everyone wins, but as we reach the end of the issue we very clearly see just what a nasty piece of work Ronan Tagge is as we head to the city of Canto Bight on Cantonica in the Corporate sector and see him at work, agonising two artists by destroying their priceless works.  He’s a rich kid with endless resources and a desire to win that sees his fleet launch to scour the galaxy for Okka, and a score to settle with Aphra (hey, who doesn’t)

It’s good to see Aphra out on her adventures again, a character I have a new appreciation for after listening to the recent audiobook release from Penguin Random House Audio. Alyssa Wong sets up our next adventure well, bringing the key players into the story early as the hunt begins, and in classic Indiana Jones style the intrepid archaeologist is chasing the goal while trying to stay one step ahead of any pursuers. Detta Yao is sure to cause plenty of chaos, the fractious relationship between Aphra and Doctor Okka will be similarly awkward but presented with fresh, crisp art by artist Marika Cresta behind a glorious cover by Valentina Remenar we’re certain to enjoy the adventure.