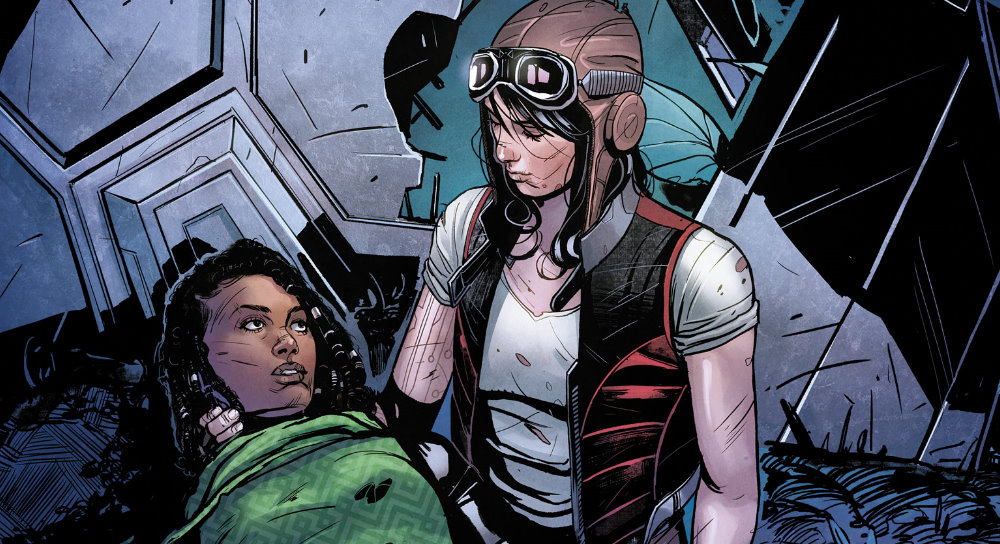 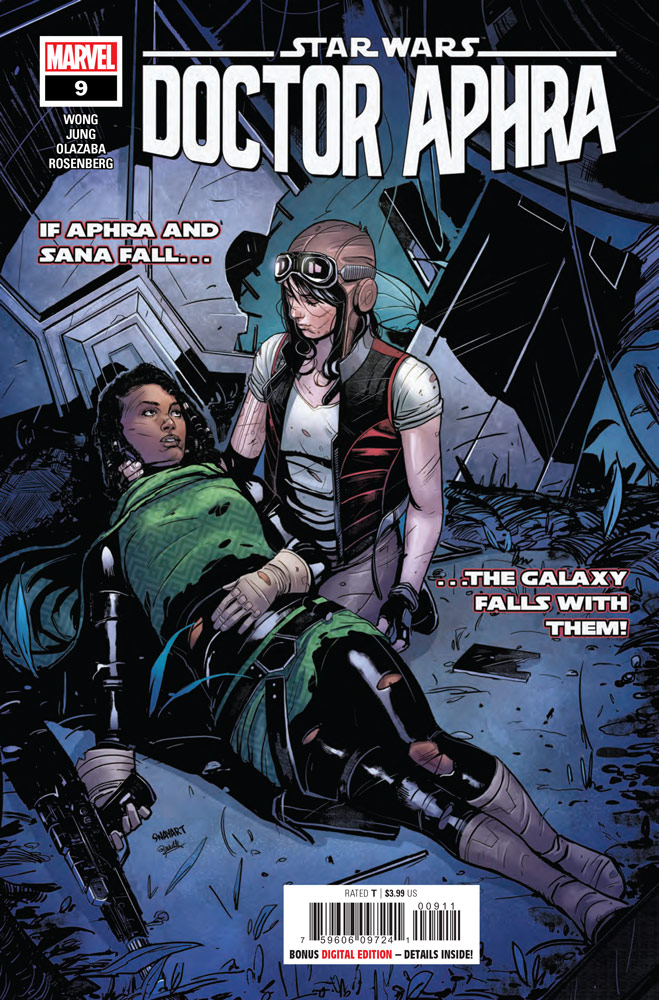 To get it done, Aphra’s recruited smuggler Sana Starros. But the ruthless General Vukorah and her Unbroken Clan syndicate are also after the hyperdrive.

The trail led Aphra and Sana to an ancient battlefield on the planet Dol’har Hyde where Vukurah [sic] attacked and left them for dead….

I love comic book covers, they can be so sensationalist and slightly misleading, and Rachelle Rosenberg’s cover is no different. The cover depicts a gravely wounded Sana Starros with a rather concerned Dr Aphra looking over her. The muted colours and cool blue environment would suggest that something is very wrong and that Sana isn’t likely to make it out of this issue, but as we learn, Sana’s wound is pretty nasty but a bit of uncharacteristic TLC and some bacta spray (which turns could be mistaken for Deep Freeze spray) Sana is back on her feet and ready to move onto Midarr.

Whilst the front cover text may be a bit sensationalist let’s take a step back and consider what’s at stake. Dr Aphra has been hired/forced? by the rather scrumptious Domina Tagge into stealing a long thought lost Nihil Pathdrive from her corporate rival De’rruyet Industries. The hyperdrive technology is what is currently causing so much trouble and devastation for our new Jedi heroes in the High Republic era.

What we learn from this issue is that whilst industrial dominance is at stake for the two corporate rivials the Galatic Empire is heavily interested in acquiring this technology and a nice juicy contract is on offer.

Tactically speaking if this drive were to work this would allow the Empire to access inaccessible hyperspace routes that normal vessels couldn’t travel down appear and almost appear unexpectedly at any location. Imagine if the Empire could appear right in front of a Rebel Alliance base, or fleet? Giving them no time to even organise a retreat? It would give the Empire the upper hand in the conflict and would certainly allow the Empire to extend its will literally anywhere in the galaxy. So it’s a good job that by the looks of things this Pathdrive is a fake!

But as we’ve seen its not just the corporate giants and imperialist rule who have a vested interest in the drive – Lots of players in the galaxy are eager to get their hands on this Nihil technology and the benefit to criminaly organisations such as the Unbroken Clan is tantalising enough for General Vukorah to forge a path of destruction chasing down the Drive herself.

After tracking them to the planet Dol’har Hyde which was a location for a huge High Republic era battle…..something we might see play out in a future High Republic story? Vukorah leaves Aphra and Sana for dead, buried in the wreckage as they set off to the location of the De’rruyet Expo where the new Path Drive is due to be demonstrated.

Meanwhile, Domina Tagge is put on notice that should the De’rruyet industries drive work the Empire will no longer be providing lucrative contracts to her and her family.

As with the rest of the Alyssa Wong’s previous Aphras we get little tid-bits of exposition and back story and here we learn that Domina is the one solely responsible for the prosperity of the Tagge Corperation, spotting the opportunity the new the Imperial regime would offer. So losing such a high value contract could potentially destabilise her position in the family and also be a huge blow to the corporation’s coffers. Star Wars business – such an exciting storyline, but done in a way that doesn’t feel too dull or dry.

Hoping over to Canto Bight we pick-up with Just Lucky and his former lover Ariole, who we are debt collecting in the the lower levels of Canto Bight, collecting and kicking those indebted to crime lord Wen Delphis.

Still at this point in the arc Just Lucky’s story doesn’t appear to be connected at all to the main plot but then as we saw in the previous arc, Alyssa Wong is pretty good and manoeuvring all the key players into the same place for the culmination of the story. That said this could be a bit of story convivence or rushed story beats to get Lucky positioned to help out Aphra in the final issue of this arc.

When they finally catch up with one of their marks, he gives them a rather grave warning; it is nearly the end for Just Lucky’s boss’ crime organising the Sixth Kin. A educated guess and one that would be in keeping with this story is that the Sixth Kin are rivals to the Unbroken Clan. Which if this is the case the connection to the main Aphra story will make sense.

Aphra and Sana pose as interns and slip into the Expo, with a bit of fast talking and light fingers Aphra is able to get a look at the Path Drive and confirm that the drive isn’t all it seems and will most likely blow-up when its tested. Which could be right there in the expo hall! On gaining access to the Beol De’Rruyet’s office it doesn’t take long for Aphra to uncover Beol’s back-up plan; if it all goes to hell make a run to Mon Cala with the investors money.

Whilst Sana’s altruistic side kicks in Aphra’s desire to make some quick credits over rules and the two squabble over warning everyone at the expo or using Beol’s clandestine network to score some other High Republic artefacts. This delay means that Beol walks in on the two in his office blaster in hand.

Unfortunately for Aphra, De’Rruyet see’s through her quickly thought up excuse of working as an undercover Imperial investigator. She warns him of the dire consequences of his demonstration and if the body count doesn’t deter him than maybe the Emperor’s wrath will. Aphras bargaining is cut short, and lucky for Chelli and Sana, as the General Vukorah and the Unbroken Clan breach the expo

The ship technicians plead with the General that the drive isn’t ready but frankly she isn’t interested in the details and is single-minded in not leaving without the ship. We’re left with Aphra and Sana massively out gunned and facing down the prospect of being blown into atoms along with De’Rruyet and his staff. Like with Wong’s previous arcs this issue feels like the clam before all hell breaks loose in the final and everyone is moving into place for the final confrontation.

The earlier scene with Sana was quite tender for Aphra and as we’ve seen before her affections can be her achilleas heel. I enjoy the back and forth she has with Sana and hope we see more of it beyond this arc.

Whilst this is an enjoyable arc this does feel like a filler story before Aphra gets caught up in the War of the Bounty Hunters series. Its an enjoyable read however and the tie-in to the High Republic feels slightly more genuine than other Marvel stories.

It’s too early in the High Republic publishing programme to really know what causes the Nihil to loose and if the Path Drive was a root cause of it, because if it is, then this story takes on a whole different life and one of dramatic irony which I feel is in keeping with Dr Aphra.