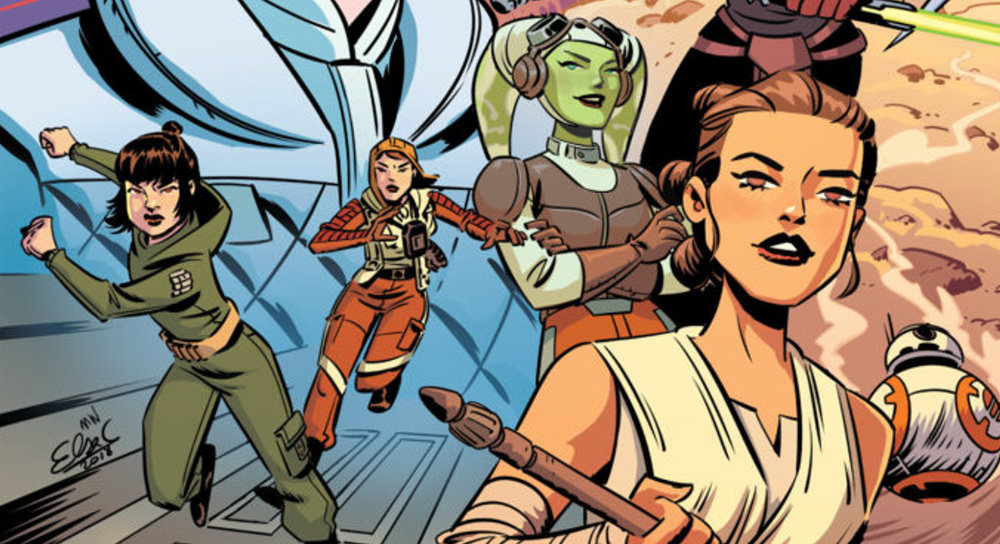 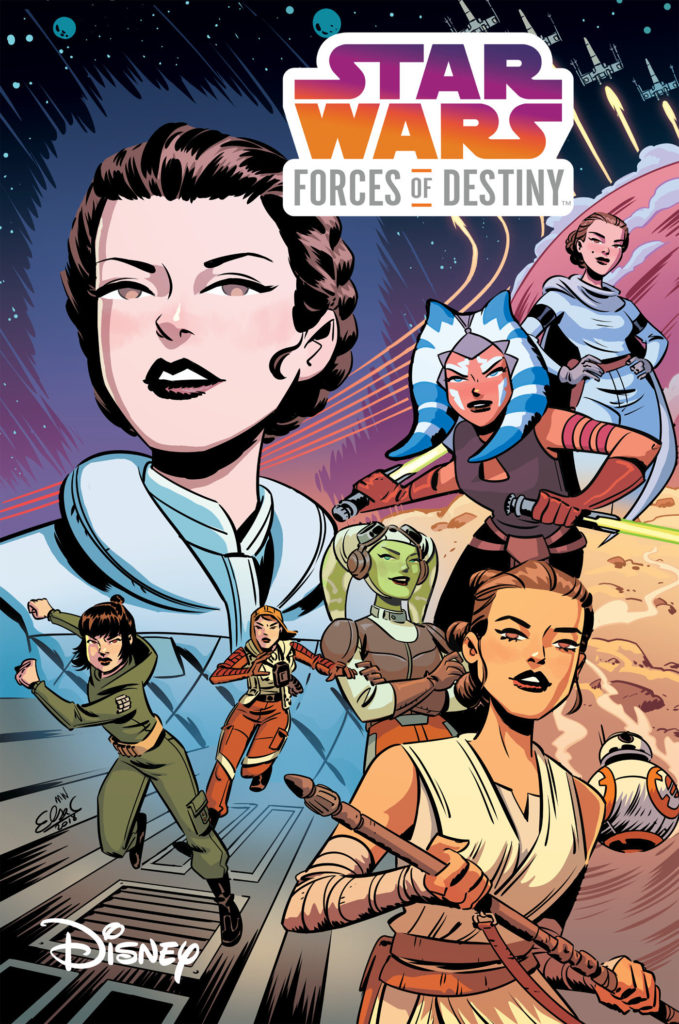 Forces of Destiny was first announced at Star Wars Celebration in 2017 as a group of animated shorts highlighting Star Wars’ most famous female characters. Along side of these, IDW published five short single stories which have been collated together in this volume. These comics are more in keeping with the Star Wars Adventures series and therefore aimed at a younger audience, however, that won’t stop this reader! As this is more an omnibus, I shall review each story in turn, beginning with everyones’ favourite princess: 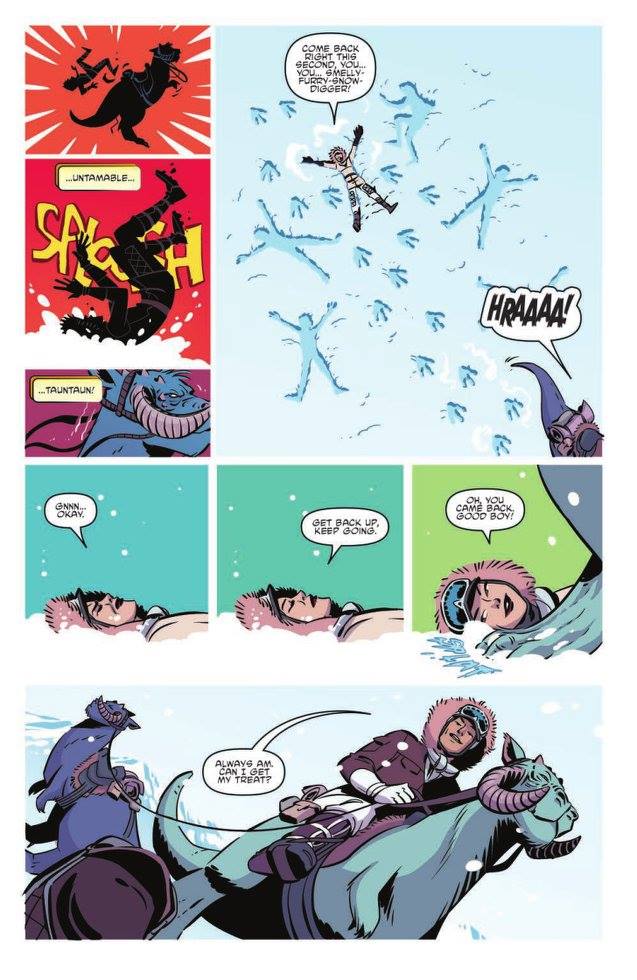 We find Leia, Han and Hera on the ice planet Hoth attempting to find supplies and repairs for a shield that has broken back at Echo Base. It’s safe to say that Leia is not a natural Tauntaun rider and is consistently having to pick herself back up again after a unwilling dismount! Clambering back up after a fall is the metaphor for this fun short as she likens her Tauntaun journey to that of the exhausting work of being the ever optimistic leader of The Rebellion.

The comic is able to convey the above powerful message whilst capturing some humour as Leia and Han inevitably have playful banter as she struggles with her Tauntaun and her early feelings for said scoundrel. Hera is more of a side character and mainly supports Leia as much as she can in her trouble, though it is interesting to note that she was present on Hoth – a battle that took place years after she stars in the Star Wars Rebels series.

In keeping with the shorts, the art is very cartoonish and the penciling is sharp. I must say, that although it’s not a perfect likeness of Leia, they have caught her strength and given her that sharp look in her eye.

A fun story that affirms Leia’s strength in leadership and adds a little more fun to the story of Hoth. 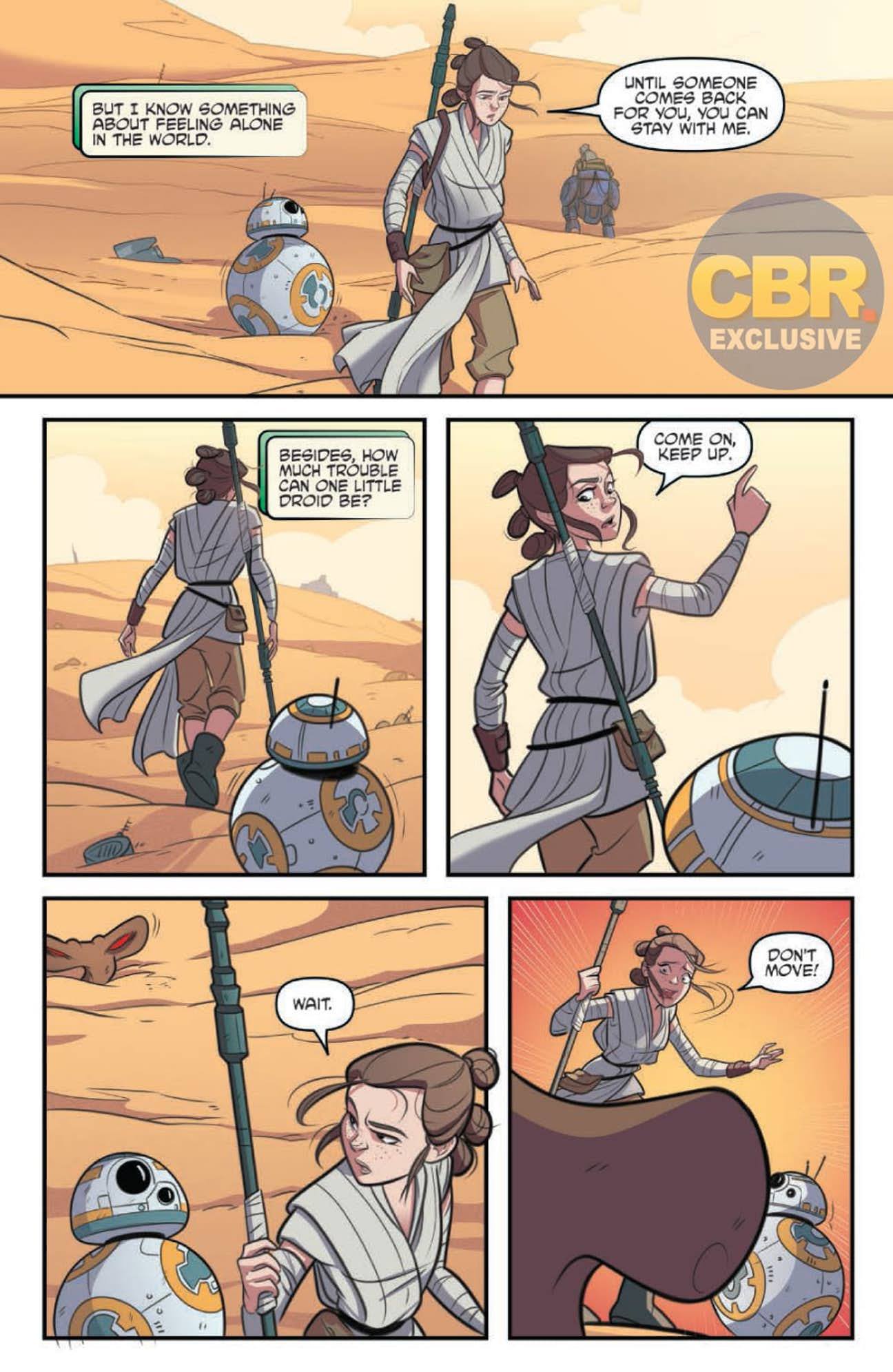 This story picks up straight after Rey rescues BB-8 from Teedo in Episode VII: The Force Awakens. Little did we know that after this scene they had an adventure with a nightwatcher worm, battled more Teedo troops and scavenged together before heading off to Niima outpost where the film picks them up again.

For me, the highlight of this wee comic is the colouring. Adele Matera makes many of the pages really pop and the final page is just a joy to behold as many of our favourite characters appear as a foreshadowing of adventures to come. The story lacks a little depth and doesn’t really add anything to Rey’s character as whole but the canon nerd in me was excited to see what is below the creepy red eyes we see poking out of the sand in the Jakku desert. 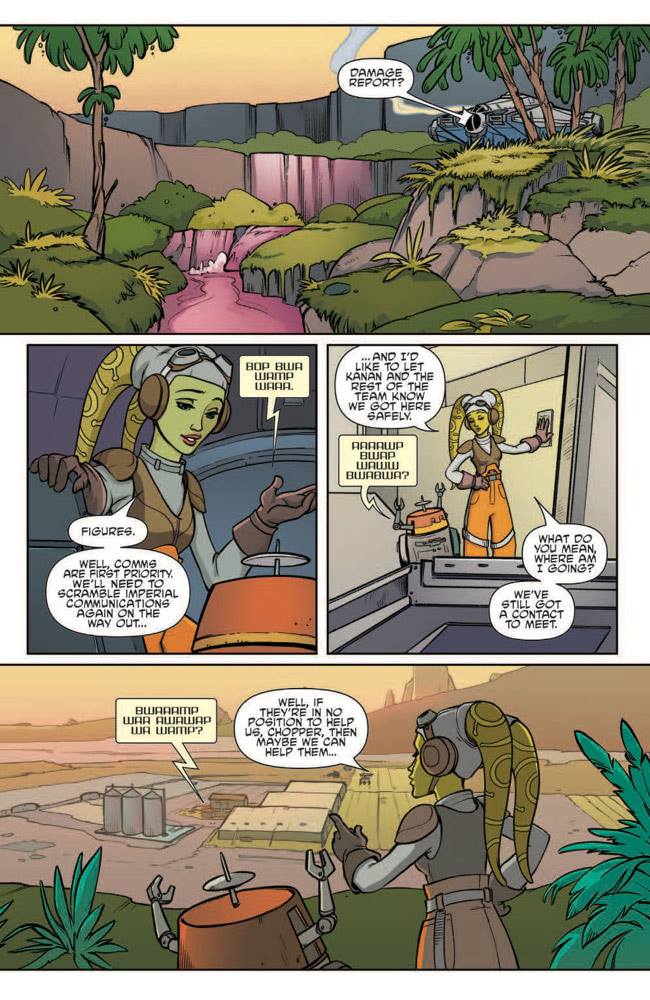 Hera and Chopper are on a mission to see whether or not they can use the planet Fekunda’s food resources to supply the rebellion, however the pesky Empire is already there and have come down on the locals with their dictatorial fist. Hera, never one to back down, commits to helping the locals against their foes.

An immediate highlight of this story is the new alien species, Lemnos is almost otter like and Au B’ree has elfish highlights – these two characters are warm and are beautifully pencilled and coloured to show their personalities within a few frames. As a reader I immediately warmed to them and would love to see more of them in the future, especially Lemnos!

Overall, this story just adds to Hera’s kindness and wisdom as a leader. She is able to get the most out of the people around her and elevate them to levels that they’d never think they’d get to. This is so in keeping with the character we have seen on Star Wars Rebels and Devin Grayson has captured her so well. This story is a highlight of this volume. 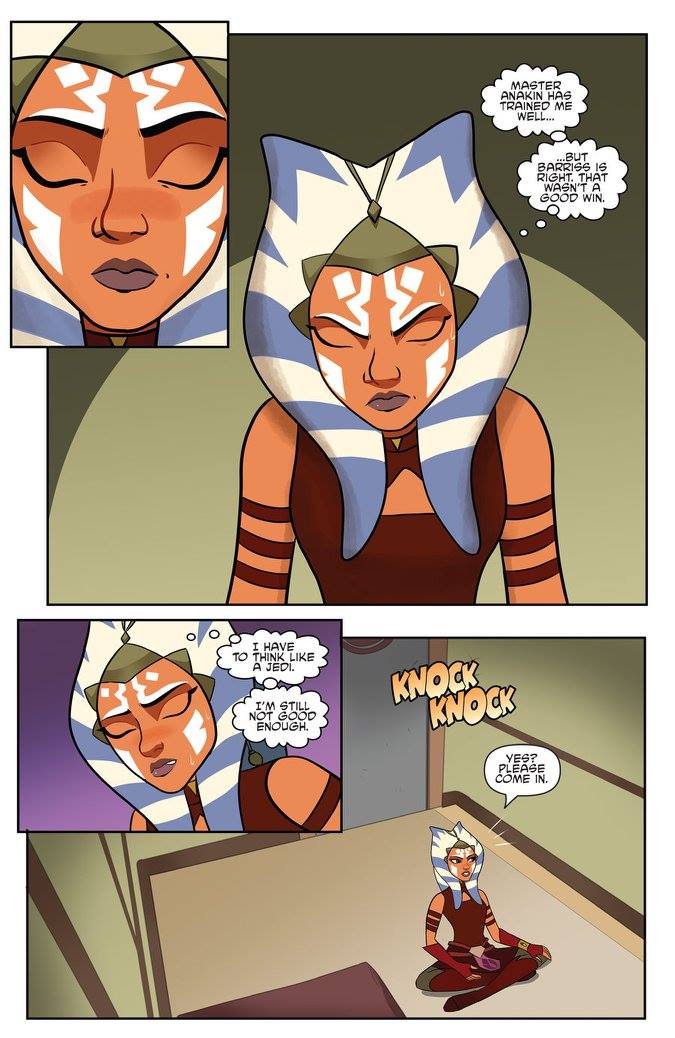 Beth Revis returns to Star Wars writing after her debut with Rebel Rising in which she spun a tale about Jyn Erso, here she returns with two other favourites in Padmé and Ahsoka. The former hires the  latter to oversee the security of a dinner party she’s holding with some important Arthurian delegates.

In my opinion this is the weakest of the comics in the omnibus. The dialogue seems a little bit forced and the story just doesn’t seem to flow very easily. I remember watching this as an animated short and it works a lot better in that format.

The art also a little jarring with some odd shading and some scenes don’t seem to make much sense with the wider story as the art doesn’t quite convey the emotion correctly, especially with Ahsoka.

First off – the pencilling and colouring of this comic is just sumptuous. The pencil strokes are clear to see and the softer colours are just beautiful. It truly is a work of art and Nicoletta has to be applauded – it’s stunning.

Rose and Paige are an absolute delight. Paige is the more confident of the two and she pushes her sister to volunteer her idea to General Organa who snaps it up. Thus follows their adventure in the D’Qar forest collecting supplies for the Resistance’s base.

Delilah, who brought Phasma to life in her own novel, is able to capture the great love between these two sisters which makes Paige’s scene in The Last Jedi that more poignant. Their obvious devotion for each other leaps of the page and the art just exaggerates this wonderfully – culminating in a fun story that will leave a broad smile on your face. This was such a fun highlight!

This collation of short comics is a joy, young readers will learn examples of how best to deal with hardship, how to show love to others and also how to put those without confidence on a pedestal they never thought they’d reach. All valuable lessons, with the one with the weakest lesson to learn, Ahsoka and Padmé, as the only one that falls a little short.

My favourite, by some stretch, was the gorgeous story of two sisters, Rose and Paige. The art seemed to go hand in hand with the writing and it just worked as a whole.

A good pick up for those who want to learn every story in the canon, but mainly, a really fun way to bring kids into Star Wars.