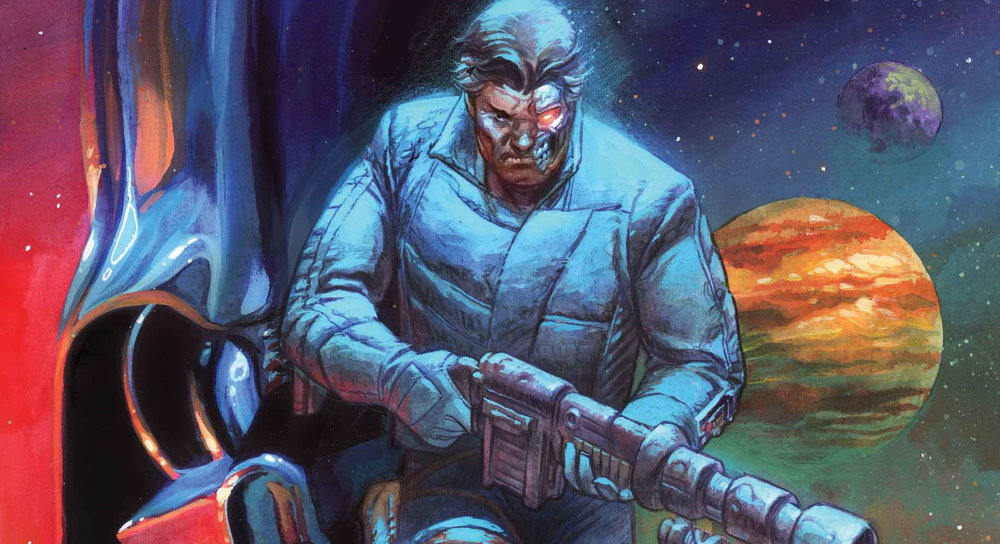 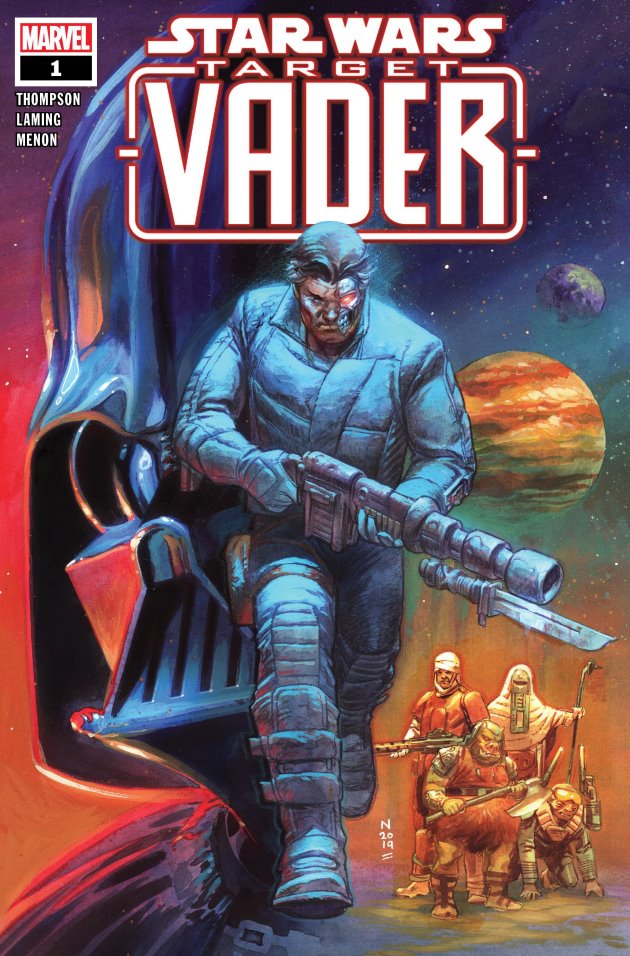 Darth Vader is the most dangerous being in the galaxy. With the entire military might of the Empire at his disposal and the dark side of the Force at his command, no foe can hope to challenge him and win.

But someone has a score to settle with the Dark Lord.

The hunt is on.

As we moved into the next decade of the Star Wars story, it’s increasingly attractive to look back at older characters and reinvigorate them for a new audience, straddling two – more than two in many instances – generations, giving us something ‘new’ for recent additions to the Star Wars fandom and a fresh take on some classic characters. It worked brilliantly with Thrawn in Rebels and the newer Timothy Zahn novels, and here we bring back another old schooler, this time from the late 70’s run of Marvel Comic – Valance the hunter.

It would be very easy to botch this. Valance is very much in the same mold as Cable, Marvel’s superhero character created many years later but imbued with many of the same character traits and with a similar appearance. That may feel like a back-to-front comparison, Valance is over a decade older than Cable, but think back to 1995 when Stallone’s Judge Dredd film arrived. He’d been beaten to the punch by 1987’s RoboCop, a character that could have walked straight into shot from the MegaCity and the pages of 2000AD. Thankfully, Robbie Thompson is more than up to the task, bringing us a first issue that not only lays out a promising adventure but delivers a slice of Star Wars life that is attractive to read and see.

We kick off on Fikari on the Outer Rim, watching a group of underworld types cautiously discuss the Hidden Hand before the familiar face of Darth Vader appears, crushing them as his hunt for the Hidden Hand continues. We know it’s high on his priority list; he is seen updating the Emperor who informs us that the Hidden Hand are selling weapons to the Rebellion, a treachery that can’t stand. Swinging us across the galaxy we land on Coruscant and level 1313 where we catch up with Valance, cleaning house in a dive bar before heading to his ship the Broken Wing and being approached to take on a hit – kill Darth Vader for the Hidden Hand with a team of equally nefarious bounty hunters including Dengar, who Valance has history with.

We end as Vader does his own house cleaning, hunting for information as he attempts to find out who is trying to kill him and we end back in the Outer Rim as the Rebellion learn that the hunt for Vader is on.

This really is an impressive issue from what could have been a very pedestrian story. We know Vader won’t die, the peril lies entirely with the bounty hunting crew and with Valance who – even 40 plus years after he was introduced, is essentially a ‘new’ character. We saw some of his earlier life in the Solo spin-off title Han Solo: Imperial Cadet, but this later version of the character is significantly more capable, weather-beaten and grizzled.

The artwork by Marc Laming and Cris Bolson is easy on the eye, while the script by Robbie Thompson really aces that underworld feel. There’s a laugh-out-loud exchange between Valance and the robo-barkeep on Coruscant, and some of the observations are on point. These days, comics largely steer clear of narrative boxes and thought bubbles, meaning writers have to weave exposition, names etc into the characters conversations. It’s often clunky; I always take the comic script as an adaptation of what’s being said rather than it being verbatim what the character would say if they were onscreen in a film or TV episode, but here the balance is struck well.

A really solid first issue that while laying out a well-trodden path lays down enough twists and turns – the Hidden Hand, Valance figuring out the droid member of their team was being tracked by a rival syndicate – to make the second episode a must-read.