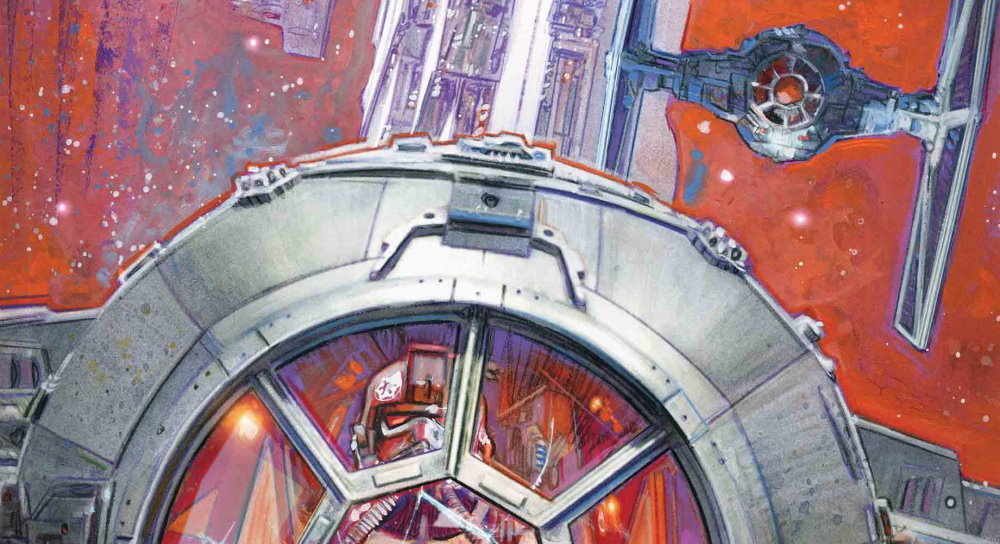 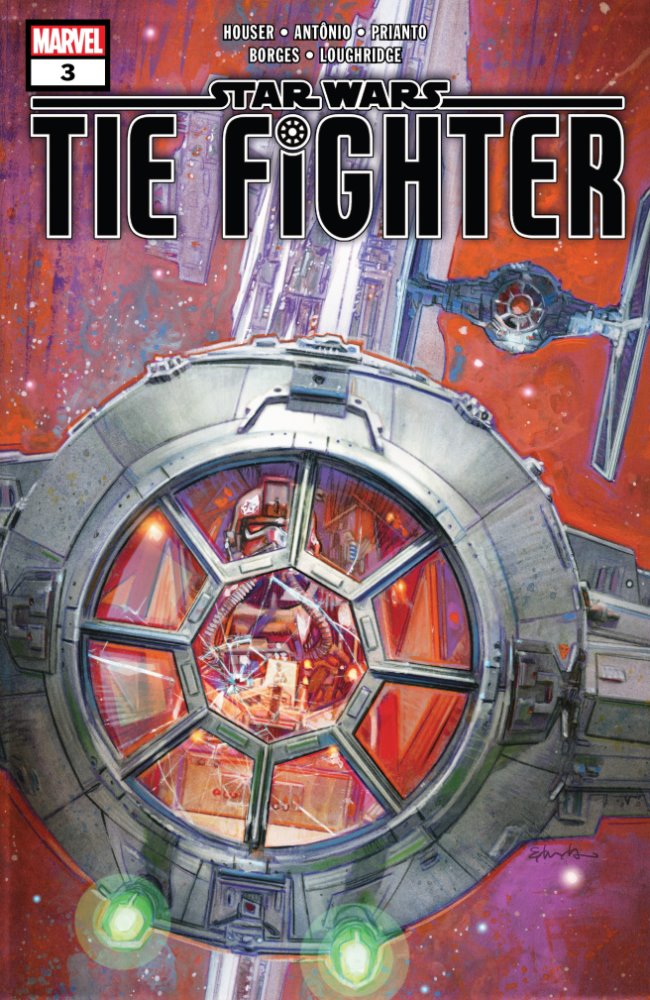 The Empire has all but smashed the struggling Rebel Alliance, whose dwindling forces have scattered before the might of the Imperial war machine. When tasked with retrieving a disabled Star Destroyer near a strategically important mining facility, the elite TIE fighter pilots of Shadow Wing were captured by what they thought were desperate rebel forces.

But they soon discovered the facility had been taken over by a rogue Imperial admiral who has asked them to join his defection. Shadow Wing would rather not…and now that they’ve escaped their captors, they need their ships to warn the Empire and take revenge on the former Imperials who betrayed them!

Now this is what I’m talking about. After two enjoyable but unremarkable issue, the third issue of TIE Fighter literally explodes into action, bringing us a peach of an issue as the stakes are raised and Shadow Wing get into the thick of it.

Following on from the second issue as Shadow Wing escape, squadron leader Broosh leads the fight, making sure Jeela and their fellow Shadow’s use non-lethal stun settings, before hitting a wall of white armour. Thankfully, he encounters a fellow leader who fights for the Emperor (how odd to be writing that – certain point of view and all that) and their fortunes change as they get their Interceptors back and begin to turn the tide.

The Star Destroyer they are trying to recapture is a game changer, as any ISD would be, and even more important is that destroyer has a buyer; the Rebellion, who turn up in numbers and start lacing into the Imperials. Here’s where it gets interesting, as TIE pilots Lyttan and Zi are killed, which hits the rest of the team hard as they land aboard the ISD Celerity and hit hyperspace, for the Emperor.

The second story, set six months before, sees Broosh become the leader of Squadron Five, later renamed Shadow Squadron, and shows what an unwilling leader he is. It’s a small scene, personal, and shows well the similarity between the Imperial and Alliance forces. Soldiers on both sides are fighting for what they believe in, many making choices with limited knowledge, told only what they need to know and Houser’s story helps firm up that parity. You could easily see these soldiers fighting for the Alliance, if things were slightly different.

The artwork in both stories is thrilling and tight, kinetic as the dogfights erupt with some really clever touches (seeing inside the TIE Fighter pilot helmets when they are talking for example) and the story skips along at pace, shifting from the facility on Kudo into space and onto the ISD Celerity while moving the story along.

I wasn’t entirely sure I’d enjoy the rest of TIE Fighter after the first two issues; I’m glad to say I was very wrong indeed and issue 4 is in my hands and ready to be opened and reviewed.

Star Wars: Tie Fighter
$31.78
Buy on Amazon This is a paid link. Learn More. Clicking the link may take you to the Amazon store servicing your country Price incl. tax, excl. shipping.  Details correct as at: 2021-05-09