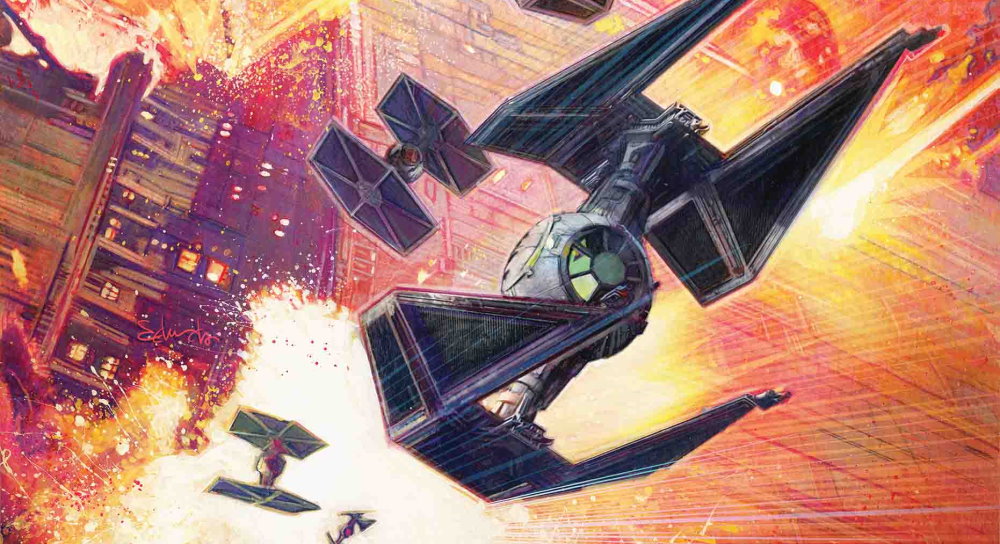 The war against the Rebel Alliance has stretched even the resources of the mighty Galactic Empire thin. It was crucial that Squadron Five accomplish their most recent mission to recapture a Star Destroyer from a traitorous Imperial admiral despite losing two of their own in the process.

One of those killed in action–Zin–was revealed to have been a rebel informant! Using this intel, Shadow Wing has tracked down the mobile rebel base responsible for not only Zin’s betrayal but a slew of defections.

Word from Imperial brass is that the Rebellion’s days are now officially numbered. Shadow Wing is ready to do their part and destroy the base…but their newest recruits haven’t yet tasted battle….

For an issue that is predominantly based around an attack on the floating rebel recruitment base, the fifth and final issue of TIE Fighter manages to fit in plenty of character moments that punctuate the dogfights and show us just what – and why – these Imperial pilots are fighting….and then throw in a curveball right at the end of the issue, leaving us wanting more. As a series, the issues have built and built and built to this finale, as Shadow Squadron figure out, identify and ultimately take out this recruiting base, and to see them succeed – to see Imperials succeed – shouldn’t but DOES give us some satisfaction.

There’s a wonderfully indignant line in the battle – “They want to poach our people for their war?” It’s a delicious flip on the general perception that the whole galaxy is fighting for freedom from the Empire. They’re not; there are plenty of Imperial loyal worlds who find purpose in working under the Empire’s control, neutral planets who find it easier to submit than resist and manage to live their lives because of it. Billions can’t step back and see the bigger picture, something Broosh says to his new cadets as they doubt first their vessels and then their skills. This is a blooding for them, but a successful one, and as they destroy their target and return to base, only to learn that their Emperor is dead (well, for a few decades anyway) and the second Death Star destroyed it rings a chilling note; what are they fighting for now?

It has to be said, after reading and reviewing the first issue of this title I wasn’t in a huge hurry to dig into the next four issues, but I’m very pleased I did as the story built along with the characters in a tale that wasn’t afraid to revel in its Imperial-ness and see characters come and explosively go.  Even the coda to the series, as Broosh and Jeela engage in a conversation regarding her not fitting into their ranks and her CO explaining why she does was a small but effective building block into making these characters one’s we’d want to see more of in comic form.

All in all a well drawn, and increasingly illuminating mini series that gave voice to the other side of the dogfight. Good job all round.

Star Wars: Tie Fighter
$31.78
Buy on Amazon This is a paid link. Learn More. Clicking the link may take you to the Amazon store servicing your country Price incl. tax, excl. shipping.  Details correct as at: 2021-05-10