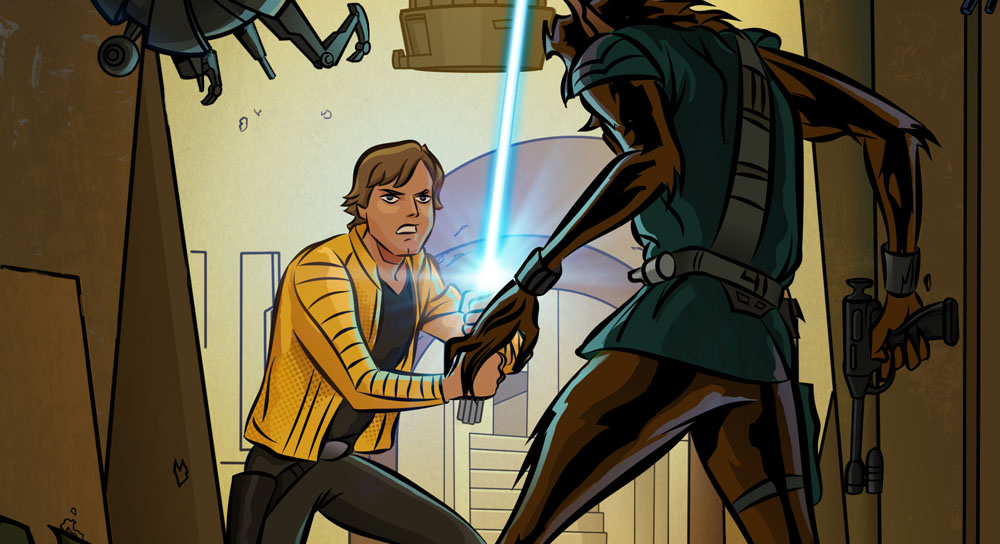 David Rabbitte has a chat with Daniel Lo of WhiteBobaFett.com about his childhood adventures at Elstree Studios, his art, and upcoming projects.

Even if you may not know it, chances are you have seen David Rabbitte‘s work before at some point. The veteran animator, illustrator, and concept artist has made his mark on a vast range of pop culture as we know it, having worked with not only Lucasfilm, but also other industry giants like Marvel, Fox Animation Studios, Fantasy Flight Games, Topps, and Upper Deck.

David has an uncanny ability to work in a wide variety of mediums while at the same time adhering to his unmistakable trademark style, as evident in his DeviantArt gallery. Additonal samples of his art also continue to appear on his Instagram, Facebook, Twitteraccounts. Star Wars fans may also recognize his art in “Roll of the Dice” and “The Last Battle of Colonel Jace Malcom“, two short stories published in Star Wars Insider magazine in 2012, and those who were at Star Wars Celebration V may have been lucky enough to pick up a Concept Boba Fett limited edition print that he created for the event. And yes, David himself appears in Wookieepedia.

David’s fans may have also noticed a change in his Star Wars art as of late. As always, David was kind enough to answer a few questions and offer a glimpse of what’s next in his storied career. 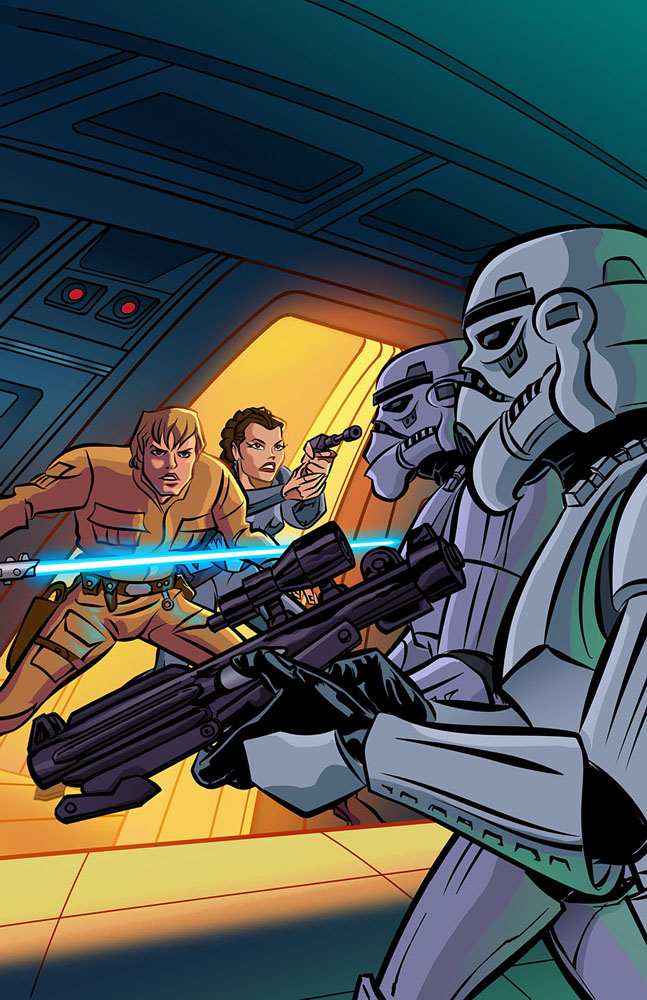 FT: What are three interesting facts about you that fans may not already know?

DR: I got to visit Elstree Studios during the production of The Empire Strikes Back! Well, sort of. My grandfather took my brother and me to the building. We went into the reception room and asked if we could take a peek inside, but they couldn’t let us do that. We did get to see the wardrobe from the outside and we took a few pictures around the area.

My first published Star Wars work was a fan art montage in the UK Return of the Jedi comic. I totally forgot I did that and recently remembered. I think I drew it around 1984.

I draw with my left hand.

FT: What was your earliest Star Wars memory?

DR: Being introduced to Star Wars by my brother just when A New Hope was about to be released. I think he had shown me the program book that had the character descriptions and the general idea what the movie was about. I remember then that my father took me, my brother, and my friend to see the movie at a local drive in. I can’t recall what my reaction was after seeing it for the first time, although I do remember the sound went out during the Millennium Falcon’s fight with the TIE Fighters, and the audience yelling to fix it! I guess I must have liked the film though, because well… I still talk about it.

FT: How did you first know you wanted to be an artist?

DR: I think by about age five I realized I had a lot of fun drawing. I practiced a lot growing up, drawing from reference, especially Star Wars! My mother was an art teacher, so I learned some foundational lessons through her on how to paint and learned some understanding of color. But I didn’t really know for sure what I was going to do until I graduated, and even after I started studying art in college I only had a vague plan! I had studied animation, but honestly I didn’t know I was going to end up working as a background artist on feature films until the opportunity presented itself. I guess I sort of knew I wanted to do book cover art and illustration, as I did those as my class projects. 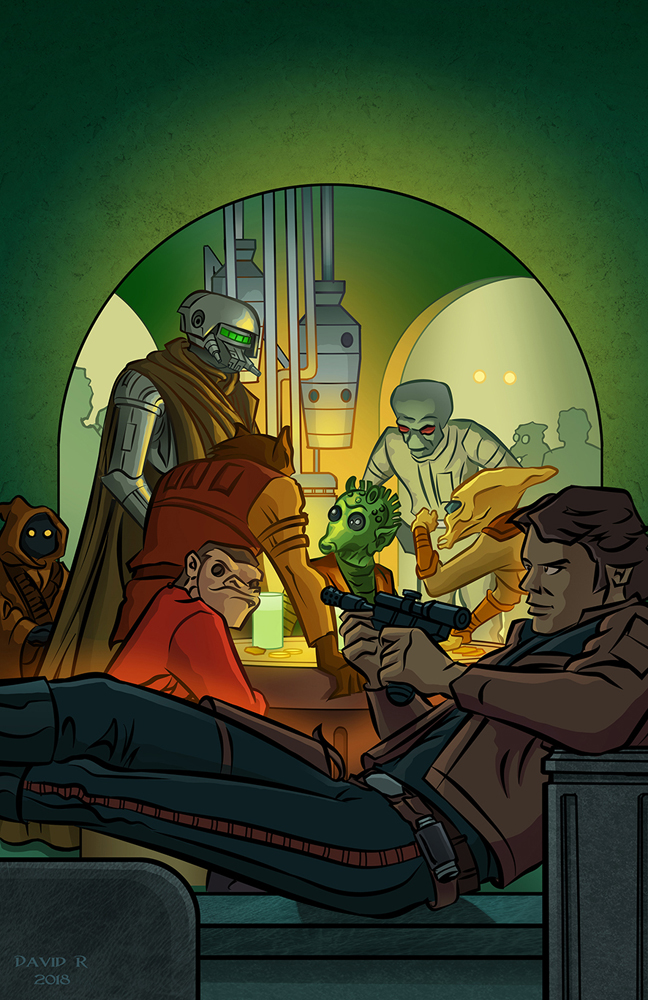 FT: What artists or artwork have been the most inspiring to you?

DR: There have been many! Ralph McQuarrie is a big inspiration. There is something magical about his work; it never goes out of style. It’s great to see his work reflected in the new movies and shows like Rebels. Joe Johnston and Nilo Rodis-Jamero have also been a big influence. Roger Kastel and Richard Amsel are amazing movie poster artists. Austin Briggs is an artist I recently discovered who has a great sense for composition in his works, and his figure drawing have a natural, real world look to them. Some of the comic artists I like include Michael Cho, Darwyn Cooke, Bruce Timm, Jack Kirby, and Carmine Infantino for his Star Wars art.

FT: How do you come up with ideas for your Star Wars art?

DR: I usually go through a lot of pictures from the films and art that inspires me to see if something sparks an idea. Sometimes if I just start sketching one idea, it will lead to another. I don’t always want to just copy a photo. I like to put a bit of a creative spin on it, do it from a different angle, or create something that could have happened that wasn’t shown in the films.

FT: There has been a recent shift in the style of your art. What inspired the change?

DR: It started while attending San Diego Comic-Con in 2017, when I saw the Star Wars Adventures comics were being introduced, which is aimed at a younger audience. I had already drawn some other cartoon/animation art before, but I had not drawn anything from Star Wars in this style. Turned out I have a lot of fun doing it, and people seem to respond well to the art. 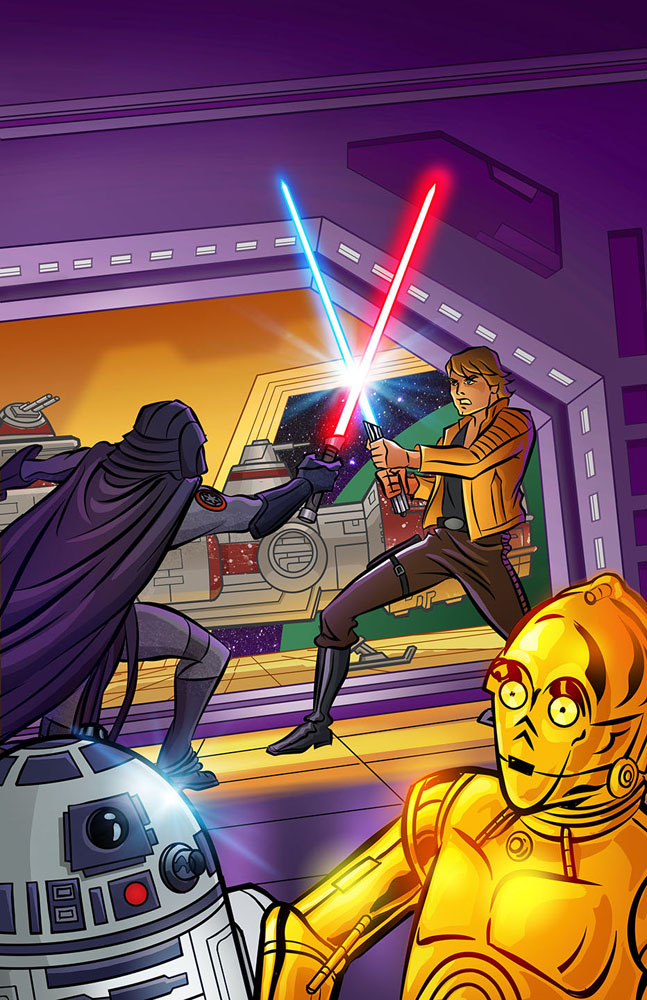 FT: How would you describe your new style?

DR: My older work is more realistic, and this definitely has more of a cartoonish look. I sketch out some ideas first, then do a tighter drawing in pencil on paper. After scanning it, I use a mix of Photoshop and the Illustrator pencil tool to ink it, then I color it in Photoshop. I try to give it a feel of action and adventure in the scenes I create; hopefully that will be something kids can connect to. I’m still experimenting where I can go with it – some of my ideas will be a little more humorous. I still want it to keep the Star Wars look in terms of design, settings, and characters. One thing I have liked about doing these is I can finish them faster than my paintings in my realistic style – which I haven’t given up on by the way. I just enjoy doing what I draw now. 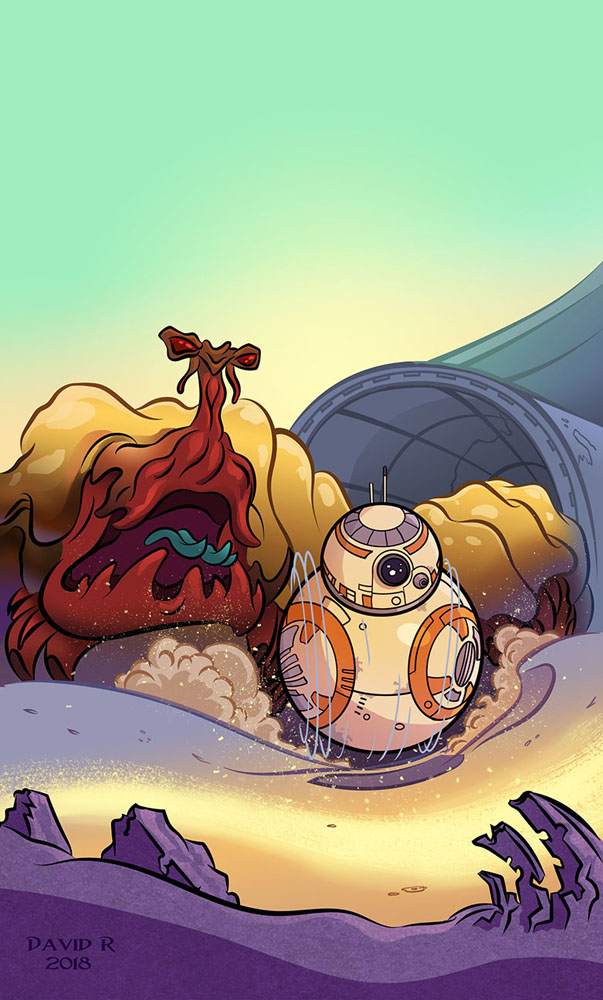 FT: What is a dream goal as an artist that you haven’t already achieved?

DR: Well I still haven’t technically done cover art for a comic book. I did do a cover for a graphic novel once, but it was on the back and covered by a jacket sleeve. I have also done a few pieces that were interior pin ups for some other publishers. I’ve been doing a lot of Star Wars cover ideas and a few sequential pages in my new style in hopes that maybe IDW Publishing will have an opening for me to do a cover or two, and perhaps work on a story at some point. It would also be great to work on illustrations for a children’s book for Disney/Lucasfilm.

David Rabbitte, concept artist, illustrator and animator, was born in Cambridge, Massachusetts and lived in the U.S. until his parents decided to move the family back to their roots in Ireland when he was eight. David lived there for sixteen years for the most part residing in the quiet countryside in County Galway before moving to Dublin in ‘89 to study Graphic Design, Illustration and Animation. After completing art school, David soon landed a job as a background painter at Don Bluth Ireland Ltd animation studio in ’93 working on his first feature The Pebble and the Penguin. A year later Bluth moved his crew to the U.S. in Phoenix, Arizona where they worked under 20th Century Fox’s new company Fox Animation Studios. It was there that David worked as a background painter and concept artist on features such as Anastasia, Bartok the Magnificent and Titan A.E.

Since then David has continued to work in various studios, most notably Fat Cat Animation on projects such as Fat Albert, Curious George and the award winning short Rindin the Puffer, as well as working in freelance illustration for various well known clients such as Lucasfilm (on numerous Star Wars projects), also Marvel, Byron Preiss Books, Topps, Upper Deck, Inkworks, Sabertooth Games, Decipher, Fantasy Flight Games to name a few.