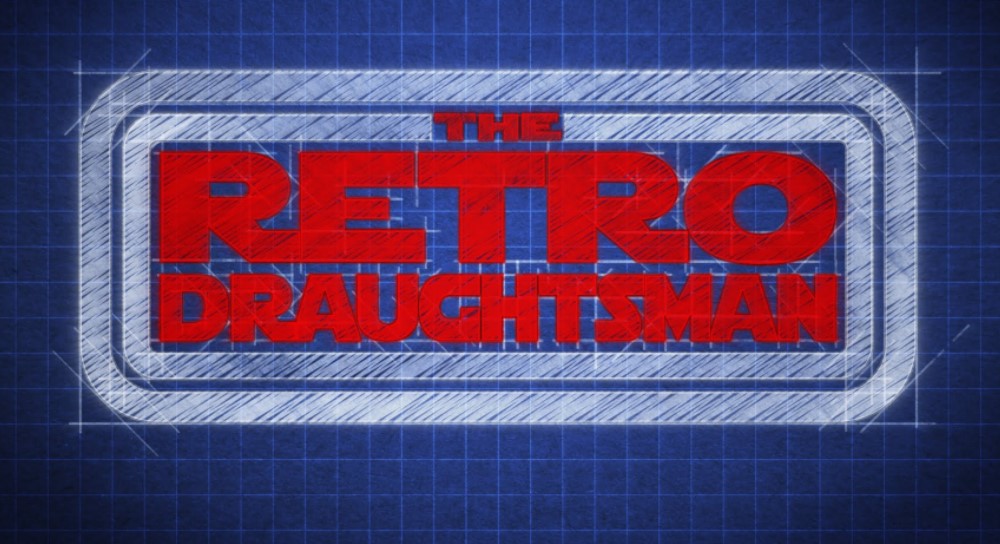 From its original incarnation as Memorabilia to the recently announced acquisition by Reed, MCM Comiccon in Birmingham has long been a major calendar feature of many a sci-fi, TV and comic fan.
This year’s ‘autumn’ event was held over the weekend of 18-19 November, and the Fantha Tracks team were out in force (although in single file to hide our numbers!), and I took some time to speak to a favourite artist of mine Gav, better known as The Retro Draughtsman.

Fantha Tracks – Hi Gav – how are you?

Fantha Tracks – Good, are you having a good show?

Fantha Tracks – Do you do many of these kinds of shows?

Fantha Tracks – So for any of our readers that aren’t familiar with your work, how would describe it and how did it all come about?

Gav – OK, well I’m a collector of vintage toys, mainly Star Wars as most of you will be, and I love technical drawing, so I just melded the two together, I drew a landspeeder – nice a simple you’d think! But no. But drew that by hand to start with, it was nice, and people were showing interest, so I thought OK, I’ll do a few more. Vader’s TIE fighter, and eventually drew enough, took it to a convention and people started loving it thankfully.

Fantha Tracks – So your first drawing was the landspeeder?

Gav – By hand yes, but the first one I did on CAD was Vader’s TIE Fighter and it took ages, getting the hang of it and because it’s all curvy round the edge and there’s a lot of detail there. Generally, you don’t notice, but when I’m doing these drawings it occurs to me how much detail went in to these toys, and it’s incredible it really is.

Fantha Tracks – And what would you say is your most challenging piece?

Gav – The Falcon by a long way, there’s so much detail and nothing repeats. I spent over 200 hours drawing the Falcon, it’s turned out nice and it’s a good seller as well.

Fantha Tracks – You did a 2017 calendar featuring the original 12 figures for the 40th anniversary, was that fun to do?

Gav – That was fun – I always love drawing the figures as that’s what I love, all vintage stuff. But a bit of modern will creep in now and again, like K-2SO and BB-8.

Fantha Tracks – I have the BB-8 and K-2SO prints and they’re great.

Gav – The one I love, and it gets no love, Chopper. I really like Chopper.

Fantha Tracks – You’re a fan of Rebels then?

Gav – Oh, yeah, love it. It’s been a really good series. I love the Obi-Wan -Darth Maul fight, straight in, no messing about.

Fantha Tracks – I can see on the table in front of me the coffee table book – the Complete Works – how did that come about?

Gav – It was basically because I’ve drawn so much, and I get a lot of people just don’t have any wall space, there a lot of people who have bought a lot of my prints, which is nice, so I thought I’d combine it all in a book. It’s got literally everything I’ve drawn in the past 4 years.

Fantha Tracks – Another thing that you usually run each year is your Advent Calendar – is that returning for 2017?

Gav – Yes, the advent calendar is coming back this year, every day, and 50% is Star Wars stuff, you don’t’ know what it’s going to be, it’s an advent calendar and that’s the point but it’s unique drawings only available on that day and never again available so really limited stuff, so if only 5 people buy it you’ll be one of five who get the drawing.

Fantha Tracks – Great, so get online every day in December and check out the surprises. Any Last Jedi creeping in – can you do a technical drawing of a Porg?

Gav – (Laughs) I tell you what, I put it out there on my Facebook group “So people, Porgs?” and it was pure hate.

Fantha Tracks – Not going to be a big seller then?

Gav – Probably not, but you never know. I didn’t expect BB-8 to be popular, possibly the next Jar-Jar Binks, and then he was great, so you never know they could be brilliant, time will tell.

Fantha Tracks – So thanks for taking some time out to talk to us today Gav.

For more information go to www.theretrodraughtsman.co.uk or Facebook The Retro Draughtsman.

STOP PRESS: The day after we recorded Gav announced that he’s considering doing another calendar for 2018 featuring 12 figures from The Empire Strikes Back first wave. Pre-orders are now open as well as a poll on which characters you’d like to see featured so get over to his Facebook page and join in the fun.

STOP PRESS 2: Gav has confirmed today (24th Nov 17) that the 2018 calendar is going ahead thanks to sufficient orders, but there is still time to pre-order, and he’s also holding a Black Friday sales offering 50% prints today only – so get over to www.theretrodraughtsman.co.uk  and snap up a bargain.

May the 4th: The Retro Draughtsman is back for 2021 with The Bad Batch

The Retro Draughtsman is back

The Retro Draughtsman: 3 days to go until the calendar begins

The Retro Draughtsman – A Blue Period