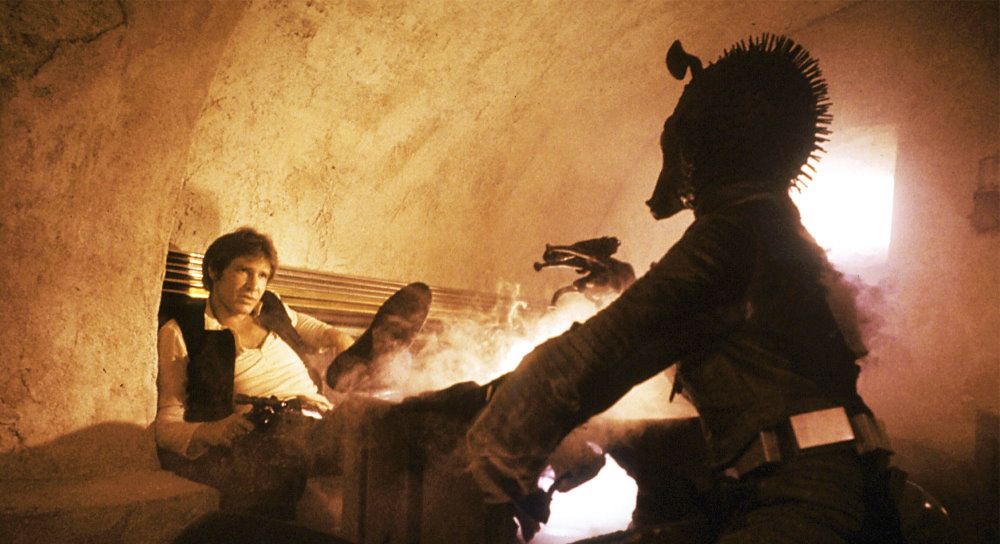 There’s already a significant amount of information to unpack from today’s launch of Disney Plus, and much of it is focused on the GFFA. Obviously all eyes are on The Mandalorian, but there are also subtle changes to the OT and PT. The six Lucasfilm era films now have their 20th Century Fox openings restored, and further to that A New Hope has this slight change.

Well, they’ve done it again. #DisneyPlus appears to have altered the infamous Han and Greedo scene from #StarWars. See for yourself. pic.twitter.com/6aGqwoOrzF

Vanity Fair also took a look at the changes.

Even though Lucas has stepped aside after selling Lucasfilm to Disney in 2012, it’s impossible to consider that anyone except him would have tinkered with a single frame of his movie without his blessing, and the company confirmed this was a change he made at least seven years ago.

It’s worth noting that previous edits of the original film have used different audio, with 35mm and 70mm having different audio tracks, as did TV versions, airplane versions and even digitally remastered editions unveiling extra lines. It’s almost certain that the Maclunkey line was recorded way back in 1977 and for whatever reason Lucas decided to tweak it one final time, albeit without the subtitle explaining exactly what Maclunkey means.

Mark Hamill on a famous ad lib: “George let me keep the line”

NASA commemorate the 43rd anniversary of A New Hope