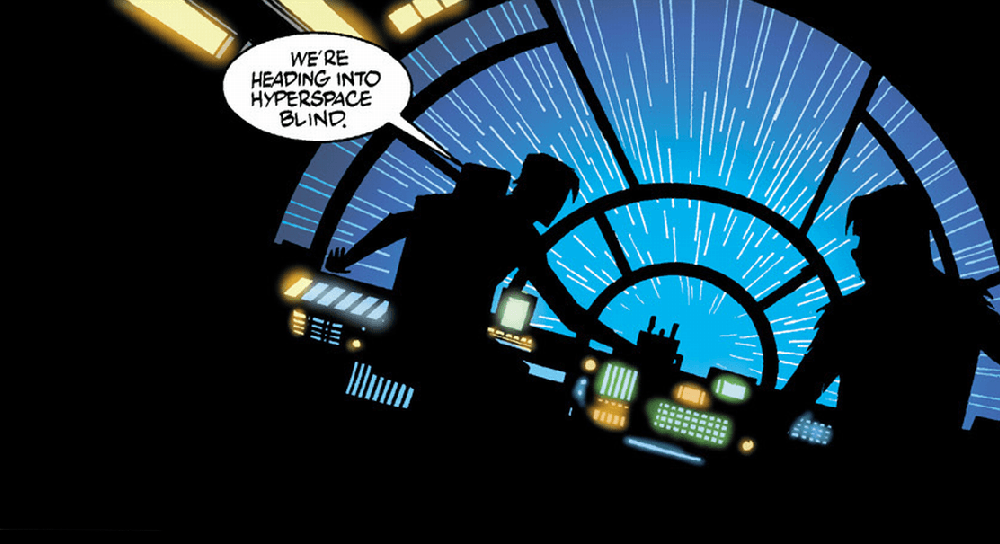 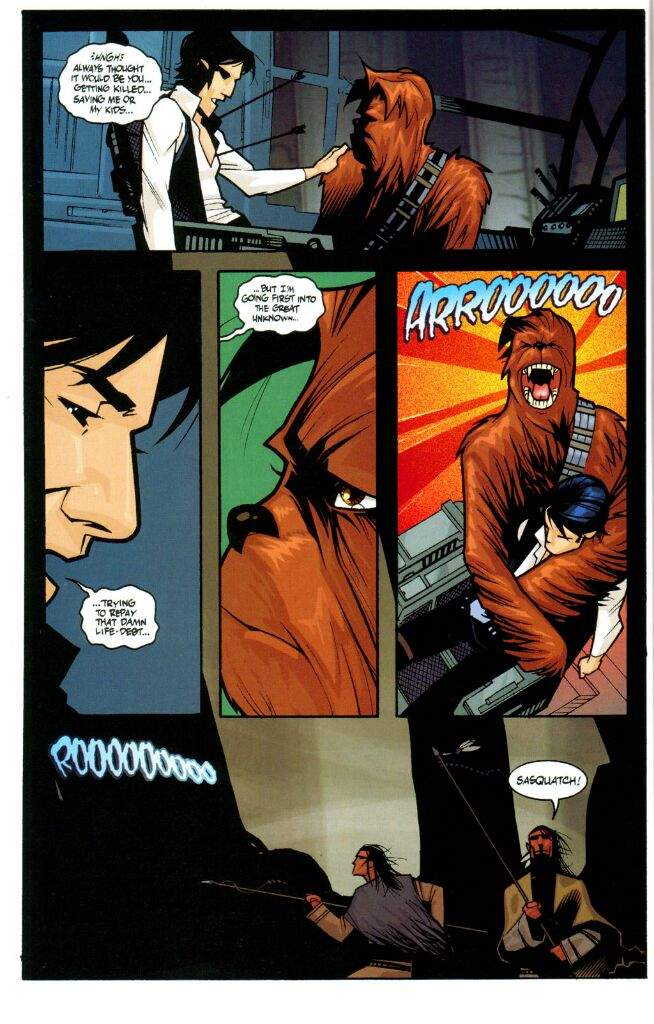 One of my favorite, more obscure Star Wars Legends story ties together Han Solo, Chewbacca and Professor Henry “Indiana” Jones, Jr. It’s called Into The Great Unknown, written by W. Haden Blackman and illustrated by one of my favorite artists, Sean Gordon Murphy (Batman: White Knight). It was originally published in 2004 in Star Wars Tales #19. Even back then, it was never considered cannon and is even less so, coming under the Legends banner.

Han and Chewie are flying the Millennium Falcon when they’re attacked by the Imperial Fleet. The two blindly go into hyperspace and come out in a completely different and unknown star system, namely ours. They crash land on Earth and are attacked by Native Americans with spears and arrows. Chewie violently defeats the attackers but Han is hit multiple times by arrows. He dies on the Falcon. Chewie roars his grief and sadness (much like he does on Starkiller Base). One of the Native Americans grimly says “Sasquatch.” Thus, the legend of Bigfoot is born on Earth—and it’s our very own Chewbacca the Wookiee. We find out we’re in America’s Pacific Northwest. A long time ago, but not too far away. 126 years later, humans find the wreckage of the Falcon and go on board. An archaeologist named Dr. Jones and his sidekick Shorty. 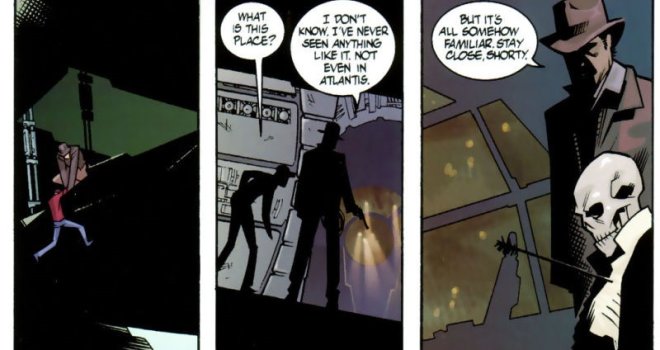 Putting two and two together, the reader realizes this Dr. Indiana Jones and his now teenage sidekick Short-Round (featured in Temple of Doom). They find the skeletonized remains of Han Solo, recognizable by his shirt and vest (and the many arrows still sticking out of him). Chewbacca watches from a distance while Jones finds “it’s all familiar.” He decides to leave the legend of Bigfoot behind as “part of the great unknown”—exactly the same words Solo used a century earlier. While the story itself is a bummer, it is still one of my favorites, just for the “cool” factor alone. Han Solo and Indiana Jones, both played by the great Harrison Ford, together in one story.

According to the Star Wars wiki, Blackman “sets the story seven or eight years after Indiana Jones and the Temple of Doom, setting the story around 1942 or 1943, which in turn would set the date in which Han and Chewie crashed the Falcon at the Earth around 1816 or 1817.” According to the original Star Wars timeline, Into The Great Unknown takes place about 10 years after Return of the Jedi.

Wookiees have a 400+ year lifespan, making it possible for Chewbacca to still be guarding the Pacific Northwest. The story doesn’t specify where in the Pacific Northwest the story takes place. We also don’t know if other archaeologists found the same thing Indy did. In our time, the Roswell crash (now firmly in the Indy canon) took place in 1947, so this incident would be before that! The Falcon would be a treasure trove of alien technology (not to mention the alien biology of a Wookiee) to the United States government. Has the crash site of the Falcon been developed by modern humans? The story of Bigfoot in the popular culture didn’t really take place until 1958. According to the story, Native Americans had their own legends of Sasquatch, but the howls of Chewbacca made them real. Real life also has Sasquatches/Bigfoot/Hairy Man sightings and legends over 3,000 year old. 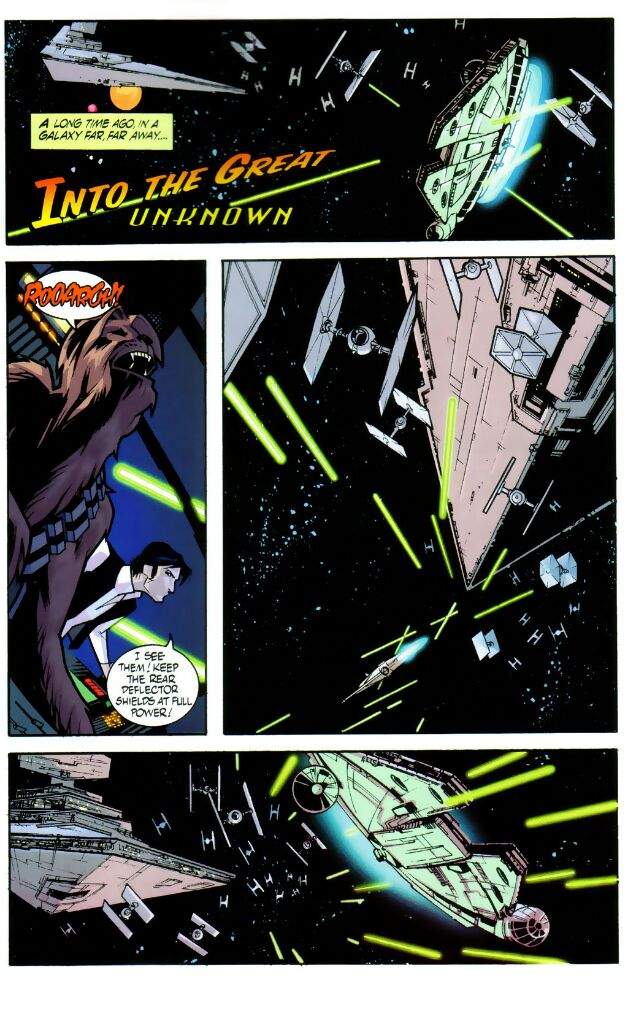 Taking the story into the modern era, we don’t know how the story of Dr. Jones will end – Spielberg and Ford are signed up for more Indiana Jones movies. Chronologically, Indy’s biggest adventures (Raiders and Last Crusade) are now behind him. He hasn’t met his jazz-playing self or his son Henry “Mutt” Jones III. Thanks to The Force Awakens, we known how Han Solo’s story ends – tragically killed by his son, Kylo Ren. The Great Unknown’s Solo mentions his “kids,” meaning Ren and maybe Rey? Just kidding.

As for Short Round, I’d like to think he told his future son about the Far-Off Pacific Northwest of America, and in particular, the Oregon coast. And that his son would move to Astoria, Oregon, AKA The Goon Docks, sometime in the 1980’s with his young family. Especially his technologically inventive grandson, nicknamed “Data.” And that Data and his Goonie friends would have an Indiana Jones-esque adventure of their own.…

The man in the hat is back: New Indiana Jones adventure from Lucasfilm Games swinging our way