The R2-KT Artists Month rolls on into July after a successful June, giving artists the chance to show off their work to a wider audience during these difficult times. Every day through out June, R2-KT focused on a talented artist of the galaxy, and now that continues into July with today’s artist, Jamie Follis.

What drew me to Star Wars:

I saw Star Wars in 1977 and it dominated my childhood. Birthdays, holidays, playtime were all Star Wars themed. My father was a maker before that was a term and I emulated him as a kid in making my own toys, props, and playsets. Today I teach college level world history, European history, comparative religions, and filmmaking and on some level Star Wars exposed me at a young age to everything I teach today. I first had in interest in World War 2, medieval fantasy, eastern religions, westerns cinema and Kurosawa all from interviews and things I read about Star Wars as a child. In college in the mid 90’s I wrote papers that explored the historical, mythological and religions influences of Star Wars before there were books and entire YouTube channels exploring them. So, as I began from to move from making toys to trying to express my ideas artistically the logical first place was my primary passion, Star Wars. So, I began to take every aspect that influenced the creation of Star Wars and isolate that influence and explore it visually in my work. I believe these explorations are part of desire on my part to continually recapture the wonder Star Wars held over my imagination as a child. I try to explore the universal and timeless themes of Star Wars by constantly reinterpreting it through the lens of all the film genres and eras that influenced the original films. 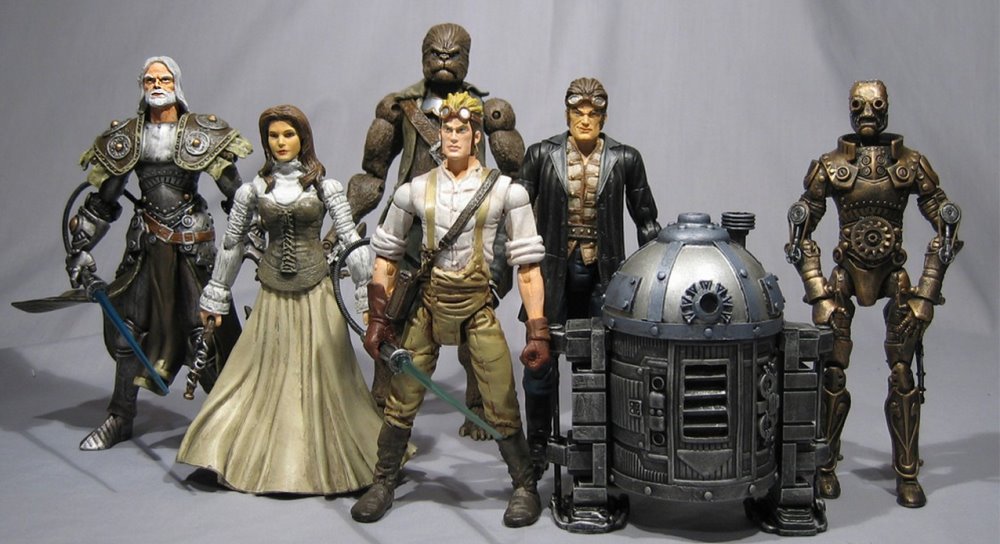 My work fuses discarded toys with my own sculpting to make new creations and as I redesign all of Star Wars in a new way. The goal with each line is to make wholly unique creations that are all still recognizable as Star Wars. This really took off in the early 2000’s before mash ups and such things were commonplace. Before I would begin a line, I would apply my historical research skills for months and make sure this was not an avenue that had been explored visually before. Each line is basically a me answering a fundamental question of “What would a Wild West Star Wars look like?”, when I complete the line I know. Then the filmmaker takes over as part of my process includes me writing out an entire backstory or plot with new names and story elements and then I approach it like a production designer. Then I create the figures using a combination of kit bashing and hand sculpting. To celebrate my site’s 20 years anniversary, I just completed a new line called “Once Upon a Time in Space” that attempts to recombine all the various elements I have spent the last 20 years unraveling and dissecting. I have chosen over the years to keep this as a side profession, I love teaching, but I also love creating these new ideas and putting them out in the world for fans to enjoy.

Favorite Pieces:
I will send you a link via WeTransfer. I think it will be too big to attach. Let me know if they don’t come through, I will email a series of links.

Where to buy:
I am kind of one man show and sell most of my one of kind, handmade pieces myself directly through my site or eBay. I never intend to sell my work but over time the need for shelf space or some extra funds leads me to selling my work. You can find all of my figures sale on my site here: http://sillof.com/