Pre-production items for Kenner vintage Star Wars action figures have definitely been the ‘in thing’ over the last 5 years or so but Matt Fox, currently promoting the “May the Toys be With You” exhibition in Leicester has helped bring to light Kenner / Palitoy prototypes that were thought to be lost forever.

In the video here you can hear Bob Brechin (former Palitoy Chief Engineer) and Roger Morrison (former Palitoy Tooling Manager) chat about 5 hardcopies for action figures from the Return of the Jedi range.

“there are the master resins from Kenner in the States and we would use them to manufacture the injection moulding tools in England and we use them to make the tooling cavities out or beryllium copper.  We took a rubber mould a made a master from that and then cast beryllium copper inserts to reproduce the figures.”

As Matt correctly points out the detail of these figures are incredible.  Here is a comparison of the hardcopies for Luke Skywalker in his Jedi Knight outfit 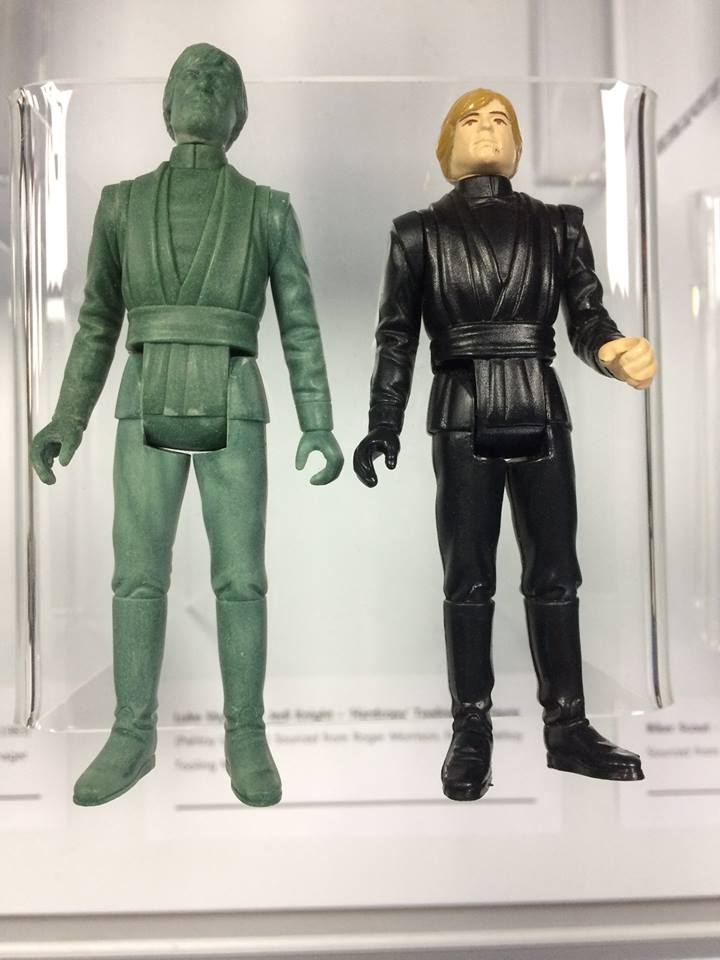 It’s probably true to say that these are not Palitoy pre-production items more so Kenner hardcopies which were shipped over to Palitoy.  The reason for this is still unclear but it’s entirely plausible that Palitoy were considering to produce the tooling for their own action figures similar to that of the vehicles they produced.  Included here are Luke (Jedi Knight), Lando Calrissian (Skiff Guard), Biker Scout, Ree-Yees and Rebel Commando.

These prototypes and more, such as the Darth Vader Tie Fighter tooling schematics, are free to view and enjoy from 2nd November to 10th November at Rothley House, Coalville Business Park, LE67 3NR.

If anyone is interested in how the hardcopies fit into the overall production of the action figure then I highly recommend Tommy Garvey’s article over on theswca.

Photos (c) Matt Fox, May The Toys Be With You