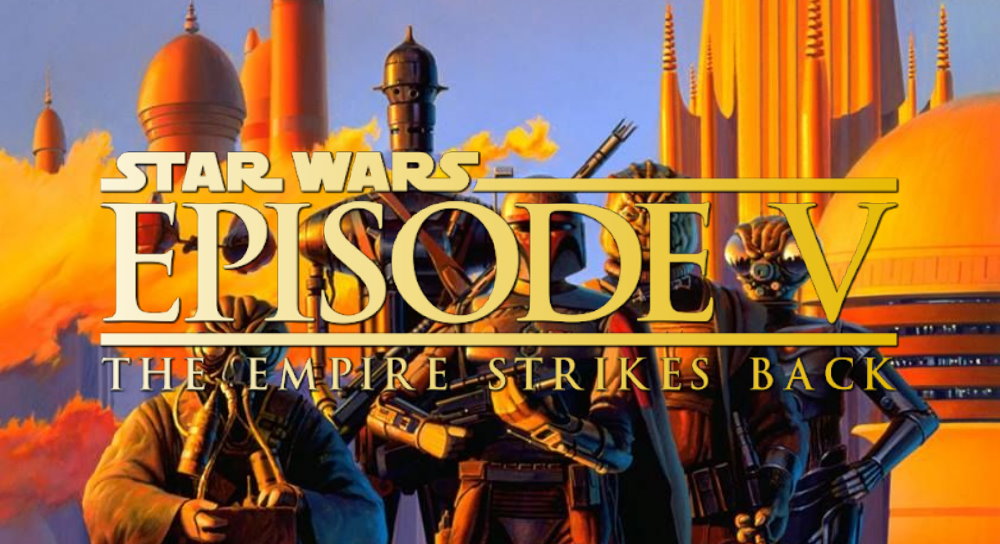 One of the many, iconic moments of The Empire Strikes Back is that of the six bounty hunters standing on Darth Vader’s Star Destroyer bridge. From the growling Bossk, the contempt of Piett to the iconic “No Disintegrations”, all of these characters became quick fan-favorites despite sharing just a few minutes of screen time.

Before this scene could be filmed on Stage 5 of the Elstree on April 26, 1979, however the bounty hunters had an interesting road to make it from concept to screen. In this, and the next, article we will be delving in the rich behind the scenes backgrounds of these bounty hunters. First up are Boba Fett, Bossk and Dengar.

Boba Fett’s story behind the scenes is a lengthy one and could fill an entire article on its own. But no article about bounty hunters would be complete without Fett. However, what follows is but a brief overview, which is in no way complete, regarding this well-loved character. 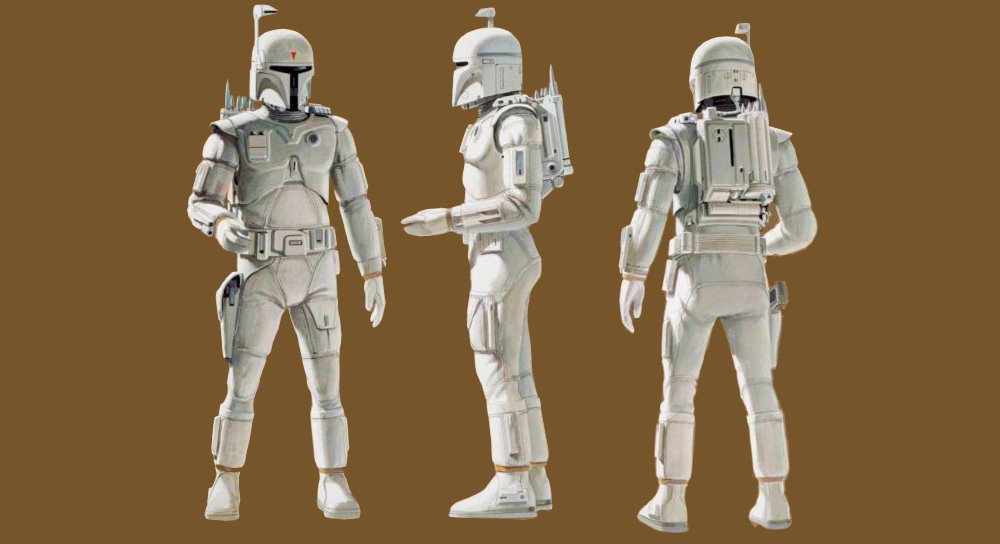 The first sketch that was made of Boba Fett was made by Ralph McQuarrie and was actually more a doodle then a full piece of concept art. McQuarrie doodled frequently during story meetings with George Lucas. During one of those Lucas was talking about Hoth and McQuarrie started to draw a helmet that characters could wear as protection against the cold weather. When Lucas saw the doodle however he said that it would make a great bounty hunter. McQuarrie was asked to develop it further, to make it a guy in a suit filled with gadgets and weapons to defend himself with. While that helmet ended up far removed from what we ended up with for Fett, the design did returned. This time it was the helmet for another bounty hunter, Rako Hardeen, who Obi-Wan Kenobi disguised himself as during an undercover plot in The Clone Wars. 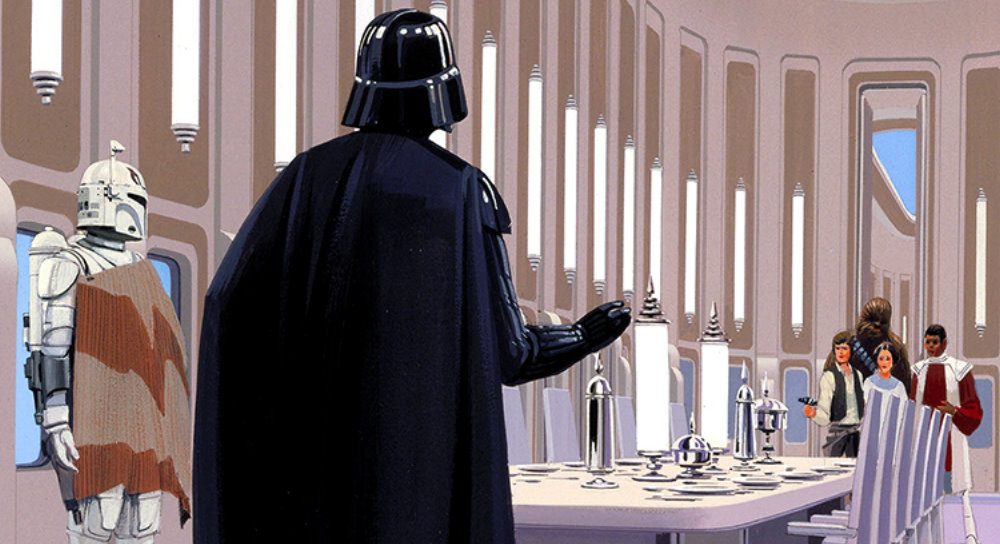 The serape seen in some concept art was based on one that Clint Eastwood often can be seen wearing in his spaghetti westerns and was conceived by Joe Johnston, who really was responsible for the design of Fett’s armor and equipment. Boba Fett as his own character, and not as an Imperial Supertrooper upgrade on the stormtroopers, was mentioned for the first time in the Second Draft (Dated: April 1, 1978). The Supertrooper design of the white armor later returned in ‘Rebels’ as Imperial Super Commandos.

All of the bounty hunters came together as collaborations between Ralph McQuarrie (concept art), Stuart Freeborn (sculpting and designing masks) and John Mollo, the costume designer. But it was John Mollo who had been given the task of creating three new bounty hunters with a budget of 500 pounds or 1027 dollars for each individual design. Bossk was the easiest of these three characters to design. Bossk was relatively cheap and easy to make, as he was sourced from the existing stock. The mask, arms and feet were all designed by Stuart Freeborn for the Cantina scene in A New Hope and were used for either the character of Sai’torr Kal Fas or her cousin Hrchek Kal Fas. The mask was known as ‘Crocker’ at the time. The suit was a Windak pressure suit (normally used by the British Royal Air Forces) and can also be seen in the Cantina. In fact these Windaks were used multiple times in the Cantina sequence as BoShek wears one in black (or technically Royal Air Force standard blue), as well as several unnamed spacers to the left of the Cantina. Bossk’s costume must have come from one of those unnamed spacers, as both his costume and the black one of BoShek can be seen together ‘First Men in the Moon’ from 1964 and in the ‘Doctor Who’ serial ‘The Tenth Planet’ from 1966. 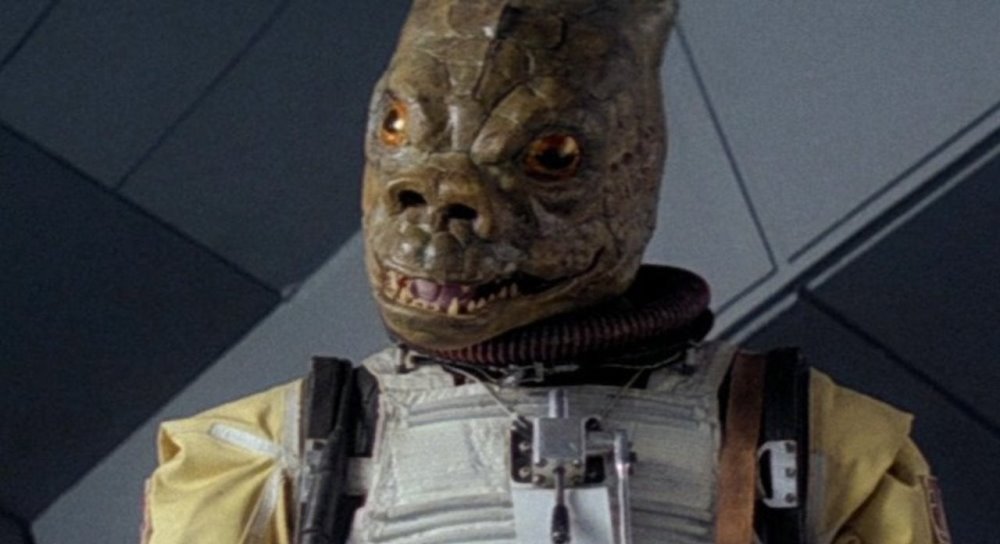 A little detail that has gone unnoticed by most people is the insignia applied to the shoulders; this was done to imply that Bossk was once part of an organized unit of some kind. This is something that never really popped up in Legends or canon stories besides an occasional team-up.

Bossk’s weapon of choice is the Relby-V10 Mortar Gun, which in actuality was a modified Schermuly Multi-Purpose Gun.

Hunting Bossk: Bossk is one of the bounty hunters that returned for Return of the Jedi, once again played by Alan Harris. Bossk is a prominent character in multiple episodes of The Clone Wars where he is voiced by Dee Bradley Baker. He appears as a main character in the Rebels tie-in novel ‘Ezra’s Gamble’ and in the currently running comic miniseries Bounty Hunters alongside Boba Fett and Valance the Hunter. 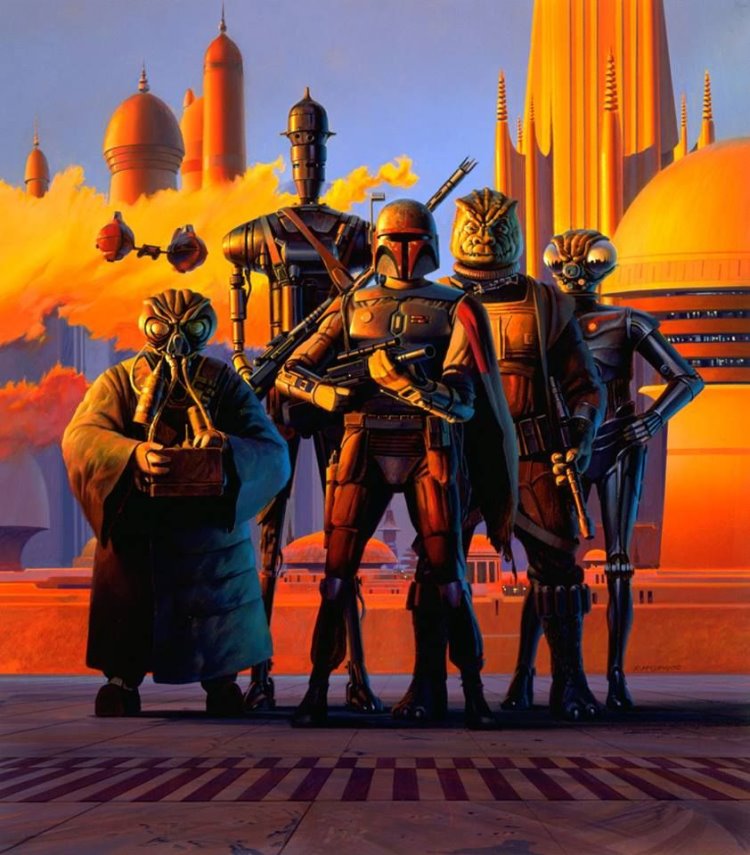 The second of three new designs by John Mollo with that budget of £500 pounds or $1027 dollars was Dengar. And just like Bossk, Dengar also is made out of a lot of existing elements from A New Hope to save money. Most notable of these existing elements is the stormtrooper body armor and chest plate, which were now painted brown and received some new greeblies. However, it was not just Imperial parts that Dengar end up wearing. Among the greeblies (added to the middle of the chest armor) was a thin plastic piece that was typically found in the sleeve pockets of the rebel pilot flight suits. The gloves and boots are also the same as those worn by the rebels on Hoth. To complete the look of a bounty hunter who has been around the galaxy a few times, the actor Morris Bush wore prosthetic make-up that showed quite a few facial scars and a bandage around the top of his head. Dengar holds a DLT-19 heavy blaster rifle, which was a modified German MG 42.

Hunting Dengar: Bush returned for the small cameo of Dengar in Return of The Jedi. Unlike Bossk, Dengar only appeared in two episodes of The Clone Wars (episodes 4×12 ‘Bounty’ and 5×14 ‘Eminence’), voiced by Simon Pegg. Dengar had a hilarious role in LEGO Star Wars The Freemaker Adventures’ 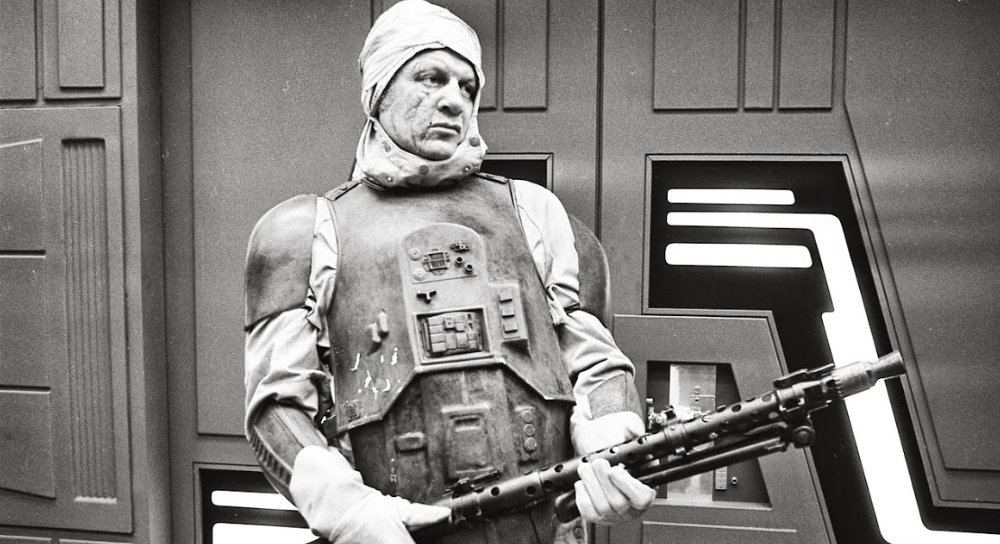 It is quite possible that Dengar appeared also in The Rise Of Skywalker, as its Visual Dictionary shows us a character as seen in the movie going by the name of Rothgar Deng. The name, background and armor imply that it is Dengar, but that has not yet been officially confirmed.

Join us next time for the behind the scenes creation of IG-88, 4-LOM and Zuckuss. 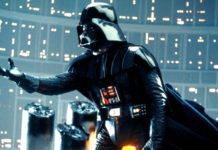 “Luke…do not resist… it is our destiny”: The Empire Strikes Back... 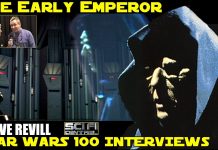 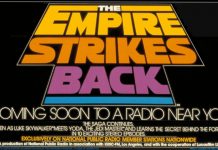 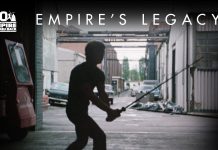 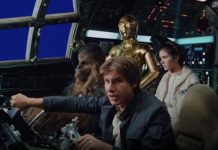 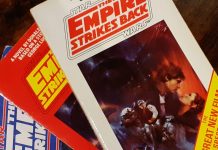 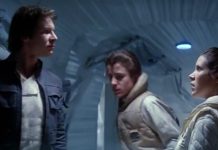 Excerpt from From a Certain Point of View: The Empire Strikes... 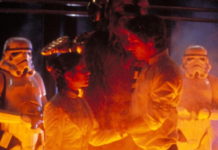 The Empire Strikes Back returns to the US box office top... 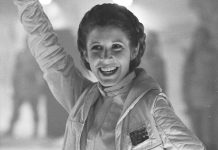 Empire at 40: The evolution of costumes in The Empire Strikes... 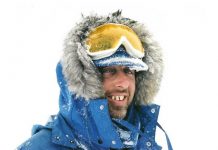 September 19, 2020
- Advertisement -
Affiliate Links: Fantha Tracks is reader-supported. When you buy through links on our site, we may earn an affiliate commission from retailers we have partnerships with.
Amazon Links: As an Amazon Associate we earn from qualifying purchases.