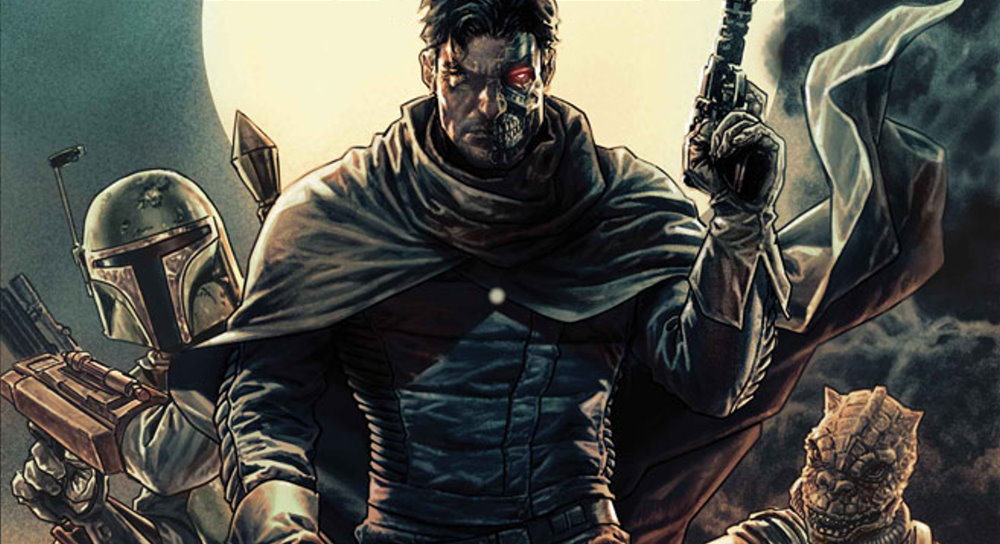 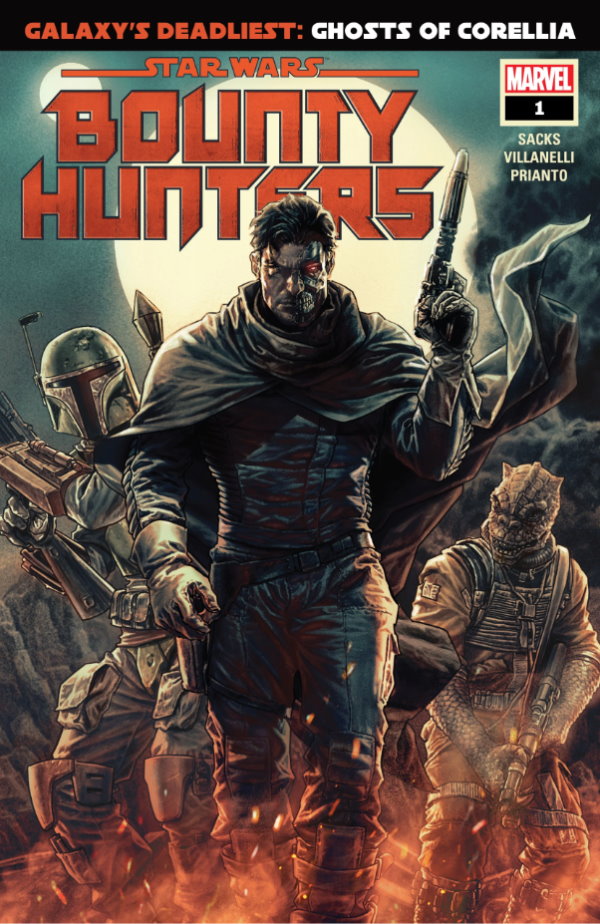 The Rebel Alliance is all but defeated after the Battle of Hoth. The Empire has redoubled their efforts to crush the scattered freedom fighters.

While the civil war consumes the galaxy the underworld thrives. Smugglers, mercenaries and thieves serve crime syndicates and cartels that vie for influence, territory and profit.

Skilled and ruthless bounty hunters—some of the most dangerous killers in the galaxy—scour systems to track down wanted criminals for the highest price. Three of these hunters—Valance, Bossk and Boba Fett—are considered some of the best. And they have a history with each other…one that’s about to put them on a deadly collision course.

Before we delve into the meat and potatoes of this first issue of Bounty Hunters, a tip of the hat to Marvel and the team behind the comic for dedicating the issue to the late Alan Harris, the man behind Bossk who became a fan favourite at conventions the world over. A classy move that eases us into the issue itself, setting the scene of a depleted and teetering Rebel Alliance, battered and scattered after Hoth and a galaxy teeming with bounty hunters who number high among their ranks Valance, Bossk and Boba Fett.

As writer Ethan Sacks did on his recent Galaxy’s Edge mini series, we hop between the past and the present as a botched mission brings Boba Fett, Bossk and Valance together along with Valance’s Nautolan mentor Nakano Lash. Going badly sideways the mission sets up plenty of enmity between the participants, and stepping forward to the present (just after The Empire Strikes Back) all of the players are here as a new mission presents itself, giving them the chance to get revenge on Lash after the disaster on Corellia.

It’s an interesting start to proceedings, laying out the groundwork for why these hunters would have issues with each other, and underpinning why Fett and Bossk would tolerate standing next to each other on the bridge of the Executor – reputation and credits. While Fett turns down payment to take on the Lash hunt, it’s clear that filthy lucre powers everyone else, and showing that each of the hunters have their own strengths and skills, it neatly presents a situation where issue two can expand and head further into the plot.

Indeed, apart from the modern Star Wars trope of the galaxy getting smaller and smaller, with everyone knowing everyone else and vast distances being traversed in hours instead of days (how I miss the old WEG system of working out distances and hyperdrive multipliers) we travel from Corellia to Batuu, Burnin Konn (first seen in the Wizards of the Coast RPG era) to the Moon of Logal Ri. It seems we will be burning some coaxium in this series as we chase down Nakano Lash, and all the while Boba Fett has the frozen carbonite block of Han Solo in his cargo hold.

There’s definitely an element of the set up that feels like it could be a modern day Battle of the Bounty Hunters as Fett tries to deliver Solo to Jabba the Hutt. We’ve already seen Bossk snarl his disgust at Fett’s work in capturing Solo, and if it gets out that he has the hottest bounty in the galaxy still on his ship…well, from watching the Disney Plus TV series we know Mandalorian ship security is less than stellar, and Lady Proxima is still around at this point in time – could a return trip to Corellia be on the cards for coffee table Solo?

It feels very much like a Marvel superhero comic, with broadstroke big action and dialogue, but these are essentially comic book characters that live their lives on the edge of their skills and experience. Bossk is the Lizard from the Spidey books, Valance is the Terminator, Boba Fett the Rocketeer. Sacks understands this and gives these characters bombastic personalities (and thankfully Fett says as little as possible, showing the word economy the best Fett interpretations display) and throws the thermal detonator of Doctor Aphra into the mix.

A solid and colourful start that could erupt into a memorable encounter.

Star Wars Bounty Hunters #1
$19.99
Buy on Amazon This is a paid link. Learn More. Clicking the link may take you to the Amazon store servicing your country Price incl. tax, excl. shipping.  Details correct as at: 2021-06-23