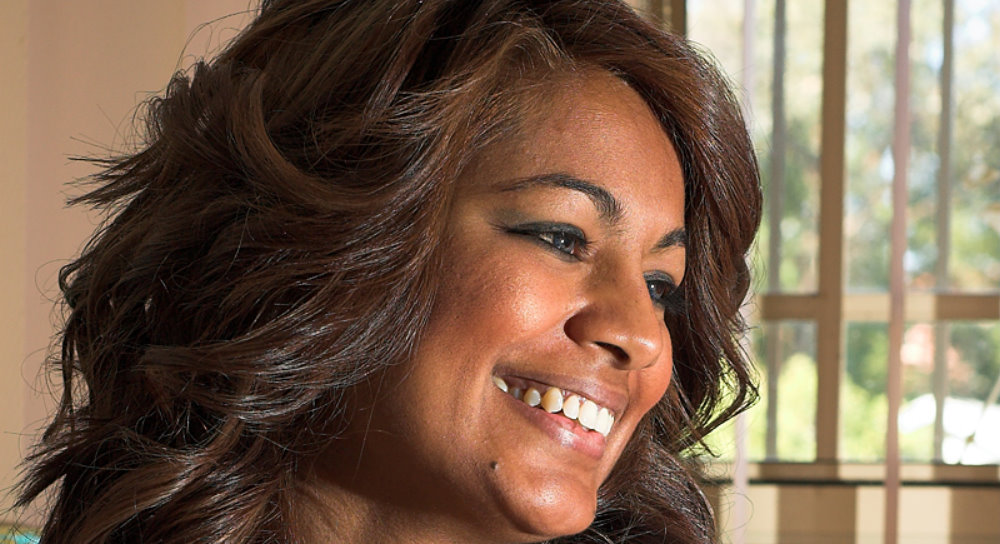 Between 1999 and 2009 Lightsabre.co.uk brought news, fanfic, podcasts and much, much more to the masses. Lightsabre closed its doors in 2009 and as such, a handful of interviews went unpublished on the site, so here is our 154th interview, with Attack of the Clones actress Nalini Krishan. 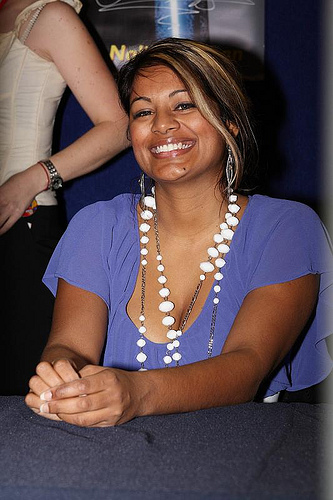 NK – Thank you so much Mark! It’s such a pleasure to be talking to you today!

Lightsabre – The world of Star Wars is enormous but the Jedi are a very special part of the Star Wars world. How does it feel to be a part of such a phenomenon?

NK – I never knew when filming this movie what was in store for me. I just had no idea, it blew me away from having action figures, travelling the world, being a Jedi, certainly has a lot of benefits! Not to mention the loyal fans. I am so glad I am a part of it and it has opened up many doors and I see the world a bit differently now that I am part of this phenomenon.

Lightsabre – You first appeared as Barriss in Attack of the Clones, fighting against the Separatists in the Geonosis Arena. That must have been an amazing experience?

NK – Yes on set it was very confidential, I was not sure who I played and just what her purpose was, but I remember being on set doing these awesome fighting movements, working with Nick Gillard. It was a fascinating experience and the stunt work on set was amazing to partake in too. Once the movie was release it was amazing to see just how it came together and the place of a Jedi in the Star Wars universe. I suppose you could say it all came together.

Lightsabre – How did you get the role as Barriss? 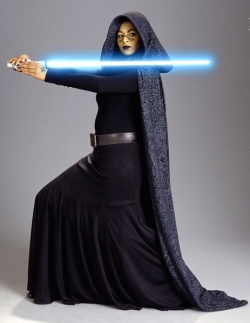 NK – My agent called me and said they wanted to see me, I did a fitting and I actually just got the part, no audition necessary. I guess I was lucky, I just had the look they wanted.

Lightsabre – Tell us a little bit more about Nalini Krishan. What are your hobbies and passions away from acting?

NK – I am quite religious, I am studying to be a missionary, so I can travel the world and assist with poverty stricken countries. I love travelling all over the world, still have much to see yet I am getting there slowly…I love reading, spending time with family and friends and currently writing a couple of different books.

Lightsabre – Were you aware of the Star Wars movies before your involvement in Attack of the Clones?

NK – Yes I was a big fan of the first three movies, I use to watch them all the time and was accustomed to Star Wars and the movies. 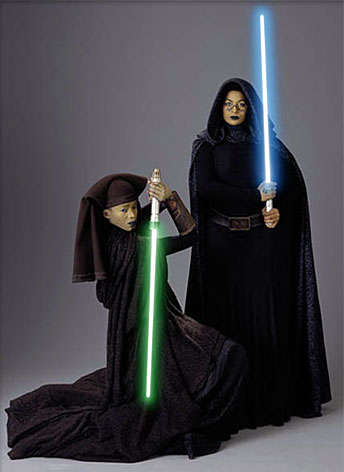 NK – I was disappointed, and to be honest, Barriss is very special; I am not just saying that because I played her character. But I could learn a lot from this character. She is calm, composed, focused, very strategic, loyal, very fast, is a healer – can alter the mind and heal it as well, and she is a great fighter…it’s hard to believe with all these talents, not to mention tandem fighting that she could have died so easily. It was a huge disappointment.

Lightsabre – Away from Star Wars, what other projects are you working on?

NK – I have a role in the Benvenuti family however that has not come into fruition yet and as well as natures guard. The acting market in Sydney has opened up again so trying to get back into the acting here, but also preparing to move to LA so I can start acting over there. 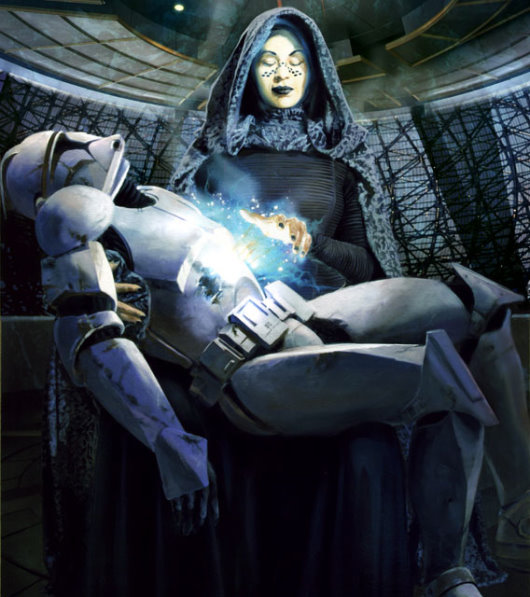 NK – I am not sure why but I really like to Darth Vader, I suppose because I had a fascination with him as a child and he was so mysterious and I felt sorry for him when he revealed he was the father, and I know I am not supposed to say that either seeing as he is on the dark side and I am on the good side!Lightsabre – Unlike the original trilogy which really only had Princess Leia in a female role, the prequels are littered with strong female characters. Where do you feel Barriss ranks in that list of powerful female characters?

NK – To say she ranks first would be bias, but I see her and what talents she has, and her biography is impressive, from being an orphan, being brought up in the Jedi council, to becoming a master Jedi, I would say she is one of the strongest Jedi’s. I would rank her second only because her master Luminari taught her so much and Master Unduli probably ranks first!

Lightsabre – After your Star Wars experience you must have travelled a lot and seen many places at conventions and events. How far afield has Star Wars taken you? 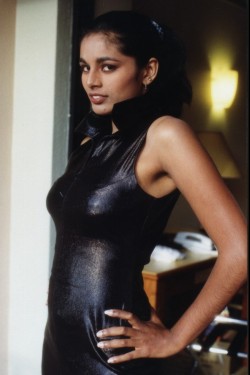 NK – The longest trip I took was early this year to Italy, 35-40 hrs of travelling from Australia to go to Torino and Rome for conventions. It was amazing to go to Italy and see a small part of it, I have been to other parts of Europe but I was living in London at the time so the travelling was relatively short and USA as well being 15-20 hrs of flying. But it’s all worth it just to see the fans!

Lightsabre – Are there any projects, past present or future, that you would love to work on?

NK – To be honest, I am a huge Twilight fan and I love vampires, I would love to have worked on that, or any vampire movies…I would love to work on alternative films. I find movies like “the air I breathe” “eastern promises” fascinating and I see the acting it encompasses and wish to do more projects like that if I could, but then again I love thrillers too! 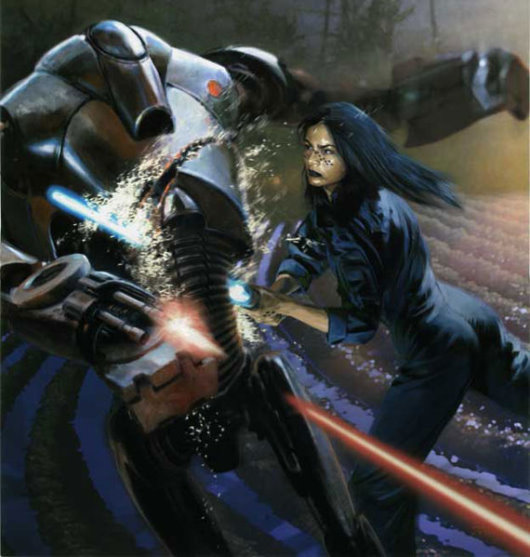 NK – That’s only a question God can answer, but hopefully more acting and also a move to LA in the next year or two to pursue the acting in a different direction.

Lightsabre – It’s been a great interview, and thanks for being our guest. Just one final question. Barriss Offee, Luminara Unduli and Aayla Secura are all called before Master Yoda and told of a top secret mission that must be carried out. He is unsure which one of you to send and wants you to identify your best skills and assets. After Luminara and Aayla have spoken you are ushered forward, but what skills do you identify?

NK – I would say Barris’s loyalty, determination, her skills as a tandem fighter are second to none, but most of all its her Jedi mind tricks, she has been known to heal people with mental illnesses and persuade with the mind, what better talent or skill to have?

Star Wars: The High Republic: Edge of Balance, Vol. 1
$14.99
Buy on Amazon This is a paid link. Learn More. Clicking the link may take you to the Amazon store servicing your country Price incl. tax, excl. shipping.  Details correct as at: 2021-05-16