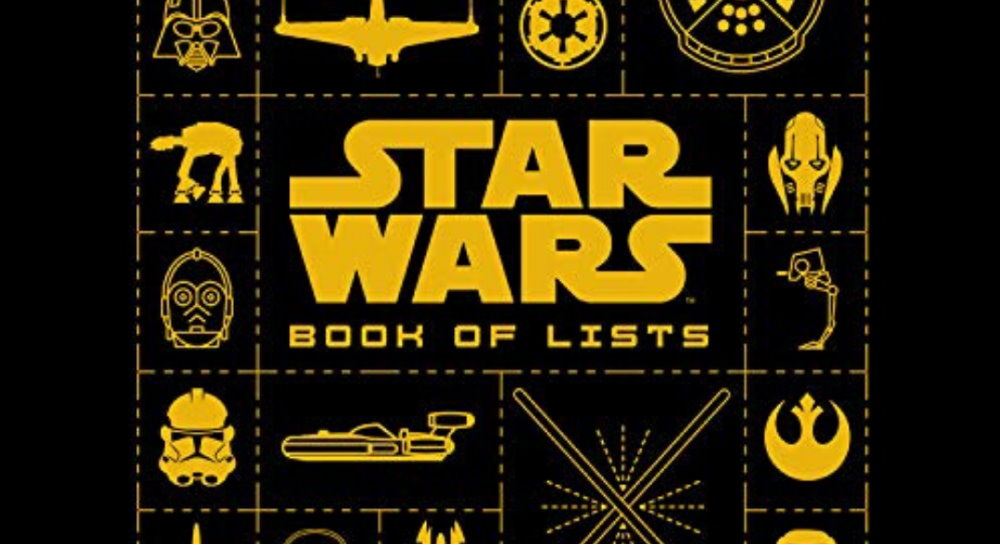 Star Wars: The Book of Lists

Star Wars: The Book of Lists takes a fascinating look at the galaxy far, far away through trivia culled from both on-screen and off over the history of the franchise. More than a simple accounting of fan-favorite characters or biggest opening weekends, this book is a compendium of the most compelling facts about the saga and fandom summarized in 100 lists.

Find out these fun facts and more with comprehensive lists covering everything you’d want to know about the characters, creatures, ships, planets, and more:
Which character has been to the most planets?
What are the deadliest creatures in the galaxy?
Who shared the most memorable kisses?
Which actors have voiced the most characters?
What are some of the most surprising cameos?
Compiling a galaxy’s worth of trivia and information about the Star Wars Universe, Star Wars: The Book of Lists is an entertainingly accessible trivia format for both hardcore fans and casual viewers.

The Book of Lists is a new reference book from becker&mayer! that contains 100 lists detailing trivia from throughout the Skywalker Saga. Readers of previous reference books might remember becker&mayer! from books like On the Front Lines, Propaganda, and more. It’s written by Cole Horton and while this is the first Star Wars book that he has written entirely on his own, he did co-author some other fantastic reference books like Ultimate Star Wars and The Visual Encyclopedia. His second reference book solely of his own writing, Traveler’s Guide to Batuu, comes out next month.

One thing about this book that I particularly enjoyed is I believe it’s our first reference book post-The Rise of Skywalker to actually put all eleven of the films together on the page. There’s something satisfying about being able to flip through it and see images pulled from everywhere. There’s a good balance of content from each film, none of them feel like they get disproportionate focus or lack thereof. There were even a few images I can’t remember seeing before, which I was pleasantly surprised by.

I do think the book could have used another editing pass. There’s at least one instance I saw where two labels were mistakenly flipped, and a large number of times labels were repeated or wrong in other ways. Some appearances sections are missing films and others have the films out of order. I also thought the alignment of pictures in some places could be a bit disorienting with trying to match a picture to the text.

Most of the lists aren’t going to surprise many Star Wars fans but casual fans will probably get more enjoyment from them, especially kids. Some of them are pretty fun too, like the one about facial hair in the saga or the one after it about capes. One list I really liked was one showing various characters through the ages. It’s a good enough idea that I wouldn’t have minded that list being even longer and more comprehensive.

The book is pretty much entirely focused on the films but there are a handful of TV and EU references sprinkled in the text, and I’m happy Chopper managed to make it into the book proper thanks to his cameo in Rogue One. My favorite spread of the book is probably the one detailing all of the most important characters from TV, books, games, comics, and theme parks.

Overall, it’s a pretty good coffee table book. If you’re a completionist who buys these books for lore, it probably isn’t for you, but it mostly hits its mark by being enjoyable enough to flip through, and I’m sure younger kids would enjoy it plenty.