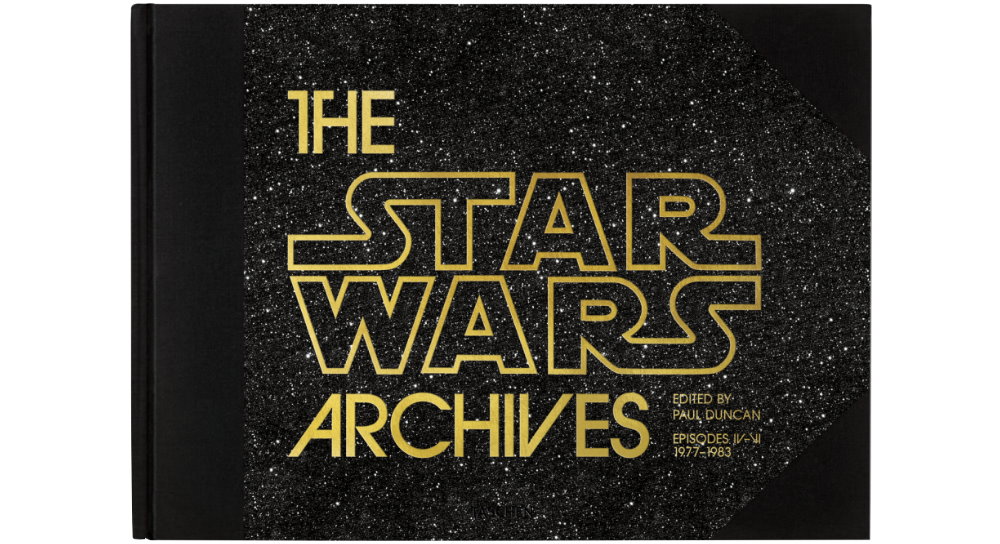 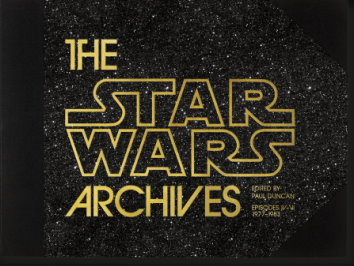 Modern Monomyth Star Wars exploded onto our cinema screens in 1977, and the world has not been the same since.

Writer, director, and producer George Lucas created the modern monomyth of our times, one that resonates with the child in us all. He achieved this by forming Industrial Light & Magic and developing cutting-edge special effects technology, which he combined with innovative editing techniques and a heightened sense of sound to give audiences a unique sensory cinematic experience.

Made with the full cooperation of George Lucas and Lucasfilm, this first volume covers the making of the original trilogy – Episode IV: A New Hope, Episode V: The Empire Strikes Back, and Episode VI: Return of the Jedi- and features an exclusive interview with Lucas.

As Star Wars fans we’re incredibly fortunate to be followers of a series with a journey to the screen almost as impressive as the tales told on it. The Star Wars Archives: Episodes IV – VI: 1977 – 1983 by author Paul Duncan delves into that golden era of Star Wars, the original trilogy and the TV films, specials and animated series that sprang from it, giving us a detailed walk through the genesis of the story, Lucas’ time on his earlier films and the making of the ultimate trilogy as it developed from page to celluloid.

Other books have covered similar ground, most notably J.W. Rinzler with his making of trilogy of books and Alan Arnold with the indispensable Once Upon A Galaxy: The Making Of The Empire Strikes Back, but Duncan manages to bring us a new viewpoint thanks to three days of fresh interviews conducted with George Lucas during 2017 and 2018.

Not only is it genuinely heartwarming to read The Makers thoughts on his masterpiece trilogy, but there’s a warmth and humour to his words that fizzes off the page. Perhaps it’s the growing distance from his baby, not just the OT but the company itself, but there’s an easy nostalgia that oozes out of his conversation. Hats off to Duncan for capturing that, and the insights those interviews bring.

The book is a physical beast. Amazon lists the book as being 33 x 7 x 48.3 cm, and while I have no idea how much it weighs I’m reasonably confident that a week bench-pressing a copy would make me strong enough to pull the ears off a gundark. Presented in a thick cardboard carrying case it will sit proudly alongside any of the modern or vintage Art of Books, Star Wars Art: Ralph McQuarrie, Dressing a Galaxy: The Costumes of Star Wars or Star Wars: Frames, just to name a few.

Design and presentation is a hallmark of Taschen and Duncan makes the very most of that as rarely seen images (who knew George liked wearing cowboy hats back in the day?) and revealing quotes are scattered throughout the 620 page book. For example, on page 299 while Duncan deep-dives into the Wampa scenes on Empire, we get this gem of a quote from Harrison Ford, describing why Lucas is such a masterful storyteller.

“George is immensely sensitive on a primordial basis to the nature of our culture, and he has a way of developing myths for a society that would like to think that it has outgrown a need for myths. His films allow us to confront the issues of childhood – relating to one’s parents, learning to be brave – which adults like just as much as children, because most of us adults never dealt with those issues the way we wanted to in our own childhoods.”

For such a taciturn man as Ford, who has often appeared to brush off the saga as largely inconsequential, that’s a deep and incisive observation, and the book is littered with them.

There’s no escaping the fact that this is well-trodden ground, but as we move further and further away from the initial entries in the saga and deeper into the Disney era there’s a Tupperware-and-sticky-back-plastic charm about the making of these movies that traverses the years. Having recently visited Finse, I was intrigued to read the pages dealing with the difficulties of shooting in that barren location, and later in the Return of the Jedi section their plans to fool fans into thinking the Tatooine scenes would be shot once again in Tunisia and not Yuma, Arizona (where some horror flick called Blue Harvest was shooting).

By 1982 I was reading Bantha Tracks and learning more and more about the people behind the films and the stories of their construction. To revisit those times in a book as deliciously handsome as this is a treat.

It’s not a cheap book by any measure and will set you back roughly £150.00, but consider that an investment. Like Star Wars Chronicles by Deborah Fine, this is a detailed release, crafted with care, attention and an obvious love for its subject matter.

If it’s within your reach, make sure you get a copy.