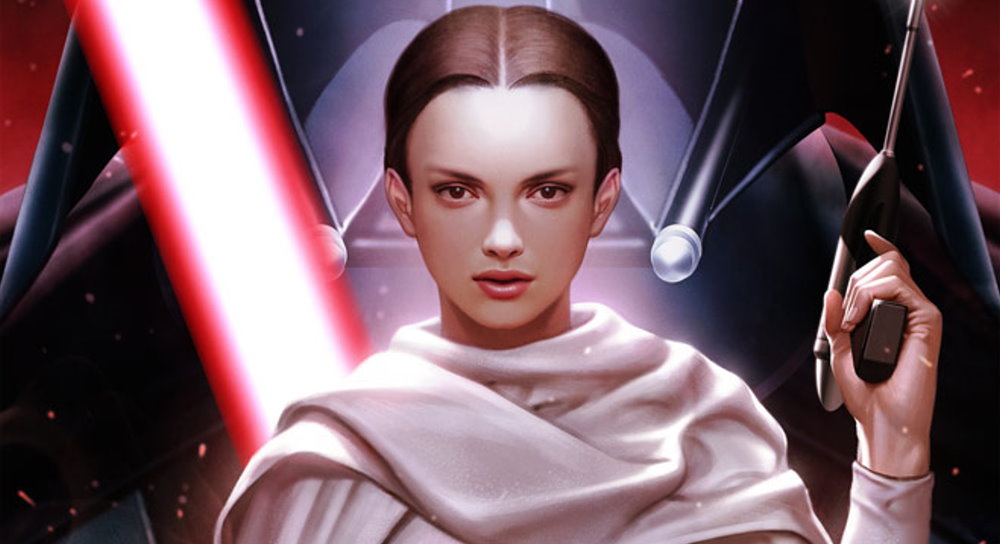 DARK HEART OF THE SITH
Part II
Darth Vader revealed the truth: He is Luke Skywalker’s father. But Luke refused to join him and escaped.

Enraged, Vader has taken a squad of death troopers and the Imperial forensics droid, ZED-6-7, on a quest of revenge against everyone who hid Luke from him. Vader’s bloody journey led him from Tatooine to Padmé Amidala’s abandoned apartment on Coruscant.

And now he stands face to face with a ghost from his past. Does Padmé somehow live?

Following on from the shocking ending to issue one, writer Greg Pak takes us straight to the issue at hand, Vader and Padme.  Using the same technique from issue one, Pak uses flashbacks to Anakin and Padme’s relationship as shown in the Prequel Trilogy before taking us back to present day. The moments are touching, and in stark comparison to the emotionally devoid Vader. “Padme” doesn’t know who Vader is, and on revealing himself she unleashes shot after shot. Vader using the Force to de-arm her, demanding to know her true identity. Skillfully using the flashback / present day links, Pak shows present day events paralleling Vader and Padme’s past. It is at times a beautifully constructed motif.

Vader quickly deduces through the help of his droid that “Padme” is in fact one of the Queen’s Handmaidens, Sabe. Sabe is under the impression that Padme was killed by The Emperor.  She doesn’t know that Anakin and Vader are one and the same. Vader implies that whomever was hiding Padme, also may have killed her – suggesting that Sabe work with him to find out who was hiding Padme. Sabe agrees, effectively commanding Vader to follow her, and take her instructions. Sabe reveals that she has the security recordings from Padme’s apartment, and they are on Naboo. The prospect of visiting Naboo is not something that pleases Vader. But they will need to work together to get the recordings, and decrypt them.

This issue fails somewhat in its writings, I think we all realised where the Padme / Sabe story was heading, so the reveal didn’t perhaps have the payoff that the tease led up to. The evolution of the plot in the issue was thus stilted by this slow reveal, which unfolded over much of the issue. The side plot with them fighting off the indigenous aliens added nothing to the plot, and whilst Sabe insisting on a proper burial for her Naboo soldiers contrasted her heart from the coldness of Vaders – again it felt like a low key plot element.

For some reason this issue felt like a filler, and that should not be the case in issue two of any series. I am somewhat concerned with the idea of relocating Vader to Naboo, it feels like the goal of the writer at present is to place Vader in a multitude of familiar locations, without the payoff of visiting those locals. So overall, I was disappointed by this issue. Whilst the notion of Vader looking into Padme’s past, and working with a Handmaiden to do so is intriguing, I want it to be fresh and innovative.  I am not convinced it will be. Coupled with the flashbacks, using known locations risks making this series too self indulgent.  I hope that I am proven to be wrong.

Raffaele Ienco‘s art is crucial for the issue in ensuring that it works for the reader. From getting the familiar characters and settings of the flashbacks pitch perfect, to ensuring that the parallels exist between those scenes and the present day. Ienco, does a wonderful job. There is a rich depth to his work, and amazing character studies in his prequel era work.

Neeraj Menon‘s colours are also vitally important. Vader’s flashbacks are so vibrant in red giving us both a cold remembrance, while equally emphasising the rage within Vader. This ability to see events from Vader’s perspective and how it has manipulated his world view, is crucial for the reader – and a mix of Ienco’s art and Menon’s colours achieve that.

InHyuk Lee’s cover art disappointed me in this issue, having loved his work in issue one. With issue two he has missed something emphasised more than once in the issue itself, the advancement in age of “Padme.” In Lee’s cover Padme looks far too young, and fresh faced in comparison to what the issue wants to convey. As beautifully drawn as the art is, this lack of consistency between the stories message and the art is disappointing.

Overall the issue doesn’t live up to the standard of issue one, and fails to deliver a satisfactory execution of the tease at the end of issue one. The plot felt dragged out, and merely a construct to move the plot on to Naboo. The art however remained strong, and I continue to love the colour work. There remains a lot to love about this series, and a lot of potential. It just needs to raise the pace and the stakes in issue three, I remain optimistic that it will.