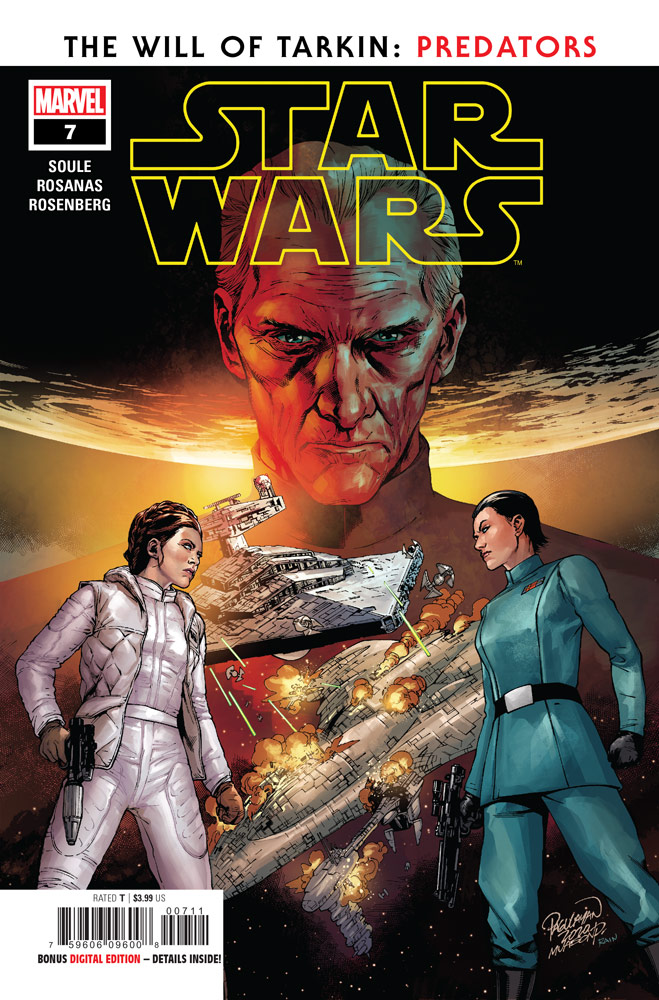 THE WILL OF TARKIN

The heroic Rebel Alliance is scattered and on the run from the evil Galactic Empire after losing the Battle of Hoth.

Princess Leia attempts to rally her friends before all hope is lost. The freedom of the galaxy is at stake.

But their cunning new foe, Commander Zahra, will stop at nothing to crush the Rebellion once and for all….

In a series that displays an increasingly cinematic feel we’re right back with the Rebel Alliance Fourth Fleet as the Seventh Fleet make contact, alerting the Imperials as Commander Zahra makes plans to send her forces after both Alliance fleets. She makes plans to attack the Fourth – Leia Organa’s division – but given they are nearer the Seventh it makes sense to divert to them, leaving the Fourth to a second Imperial attack group. Zahra’s second-in-command explains to an officer that her interest in Leia is personal as we flash back in time and space to Eriadu where Zahra stands to attention as Grand Moff Tarkin leads her and other officers through another lesson; proving their worth to the Empire. They are instructed to hunt a creature on the Carrion Plateau, something not done by a non-Tarkin for many years, and bring its head to the Grand Moff in a scene reminiscent of the James Luceno novel half a decade ago. That Zahra not only kills the creature but also the other two initiates impresses Tarkin, and as we step ahead in time to meetings with Krennic and Lord Vader her worth to him is evident.

While Tarkin is busy with business on the Death Star, Zahra is sent to the Mid Rim to deal with a warlord called Burnium Ro who is using imagery associated with the defunct criminal organisation the Nihil who were prevalent in the era of the High Republic. Tasked with once again delivering a head she takes the Carrion Spike to Ikkrukk in the Mid Rim where an array of probe droids are used to find and follow Ro to his base of operations. Decloaking in a distinctly Star Trek fashion, the Carrion Spike obliterates the base, but once back on the Death Star she is reprimanded; they took out one of Ro’s decoys, and by not bringing the Grand Moff his head Zahra has embarrassed the Empire and earned Tarkin’s displeasure.

That is displayed soon after when she can no longer gain access to his office. With instructions to be reassigned, she takes a waiting Imperial shuttle marked to be kept ready for high ranking officers to use and flies away, just as the Death Star explodes; we’re at the Battle of Yavin, and Zahra left with Tarkin’s quickest method of escape from the stricken station (even though we saw him refuse to ‘evacuate? In our moment of triumph?‘) taking away any hope of reconciling with Tarkin, the man who taught her so much.

Flashback to the present as her forces carve into the Seventh Fleet, she learns that the Fourth Fleet weren’t there when Imperial forces arrived. That mystery is quickly solved as they appear, trapping the Imperials in a pincer move, and we end the issue as she prepares a shuttle to board the Alliance ship.

This really was an impressive issue, nipping in and out of prior stories in style and laying out the motivations behind Zahra and her issues with Leia Organa. Soule once again captures the characters well, especially Tarkin who can be a tricky character to find, and the art from Ramon Rosanas and colourist Rachelle Rosenberg is quite simply delicious. While the now regular nods, tips and winks to the High Republic is as subtle as a Gungan acupuncturist, the issue is a treat for the eyes and an engaging read; issue 8 can’t come quickly enough.