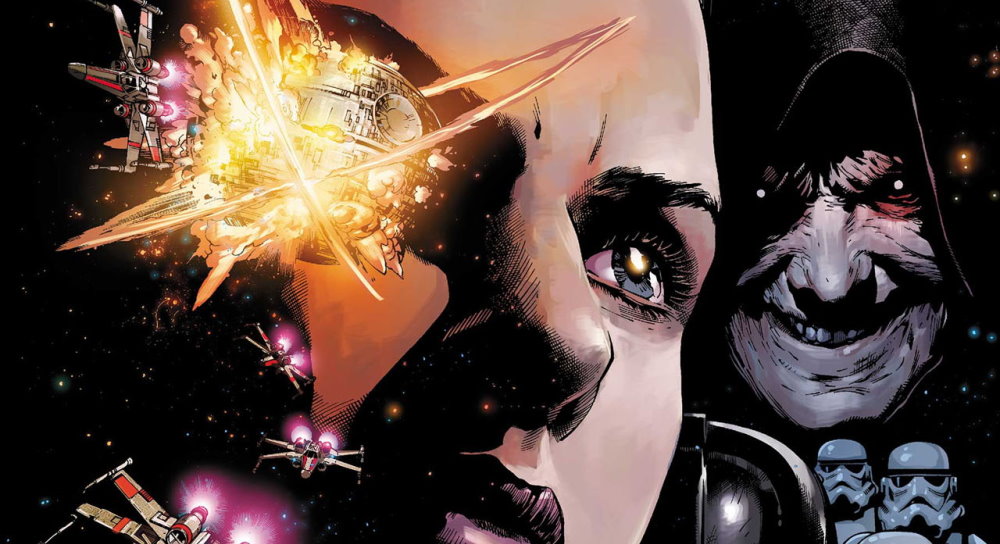 THE WILL OF TARKIN

The heroic Rebel Alliance is scattered and  on the run from the evil Galactic Empire after losing the Battle of Hoth. Princess Leia attempts to rally her friends before all  hope is lost.

But the Empire’s cunning Commander Zahra has broken Rebel security codes and will stop at nothing to crush the Rebellion once and for all.

Zahra now springs her deadliest trap yet on the unsuspecting Rebel fleet….

It can be tough, matching up what we see on the big screen with books, animation and comics, remembering that all of this is one, consistent continuity; if it happened in any of these media, it happened. Get past that understandable hurdle, accounting for slight variances in presentation (over-egging physical abilities in animation, verbal exposition in comics) and you do have an ever-evolving galaxy of events and occurrences that grow and expand every Friday on Disney Plus, Christmas at the multiplex, or every Wednesday at your comic store. Issue 8 of the latest ongoing run of the main Star Wars title is such a case, showing a Coruscant meeting between Vader and the Emperor in the immediate aftermath of his Bespin meeting with his son.

The Emperor’s military options have been whittled away. Tarkin is long gone, Thrawn no longer an option and the bludgeoning weapon of Vader – while somewhat sharper and more incisive than before – is now distracted by the search for his son Luke Skywalker. Interesting then, that with Palpatine keen to eliminate the now splintered Rebel fleet before their rendezvous it’s Vader who suggests another option; Commander Zahra.

Step to Kessel where Zahra receives word that Vader needs to speak to her, offering an opportunity to find the redemption she thought she’d never get when Tarkin died at Yavin. There is a warning – while she might find that redemption, failure would mean certain death as not only Vader knows of her mission, but also the Emperor. That firms up her resolve to lead the mission herself, and as the battle rages and Leia’s ship is about to be boarded, Zahra cuts through Rebel soldiers like a fury until she lays down her ultimatum – the ship explodes unless Leia comes to Zahra, alone.

The battle continues outside as Luke, Lando, Chewie, a returning Wedge Antilles and the Alliance pilots take on Imperial forces, while Zahra explains herself to Leia, slowly slicing at her with her blade, intent on finishing her until Luke distracts her, forcing her to make good her escape and revel in the belief that her attack on Leia will drain her resolve – her hope – and in turn damage the Rebellion.

This series really is hitting its stride, as Zahra’s mission evolves under the instruction of Vader and her motivations made clear. To steal the hope from the Alliance, to dim the resolve in Leia is a smart move, and how it’s being presented via the sharp writing of Charles Soule and the crisp artwork of Ramon Rosanas really is a joy. As good as Star Wars comics have been under the second Marvel era, and one to soak up and enjoy.