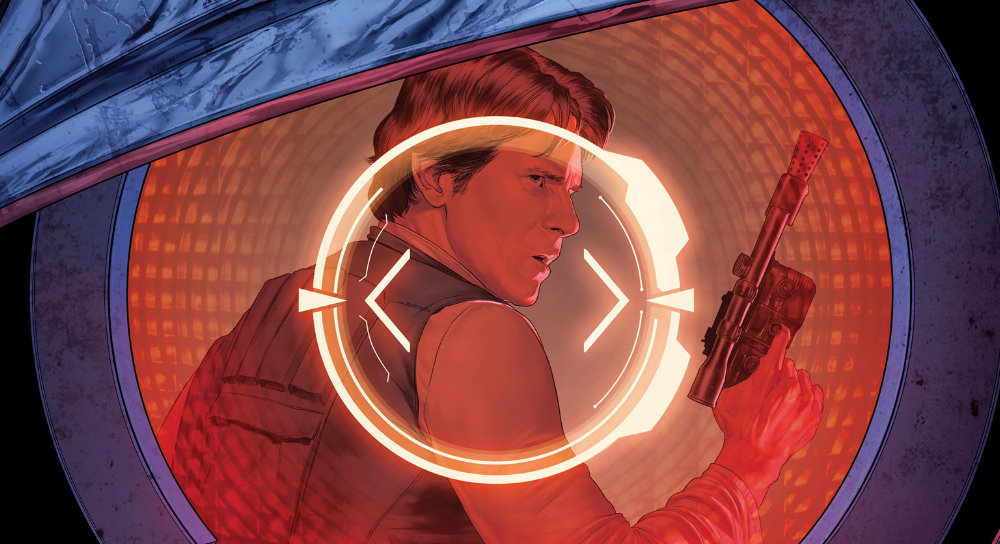 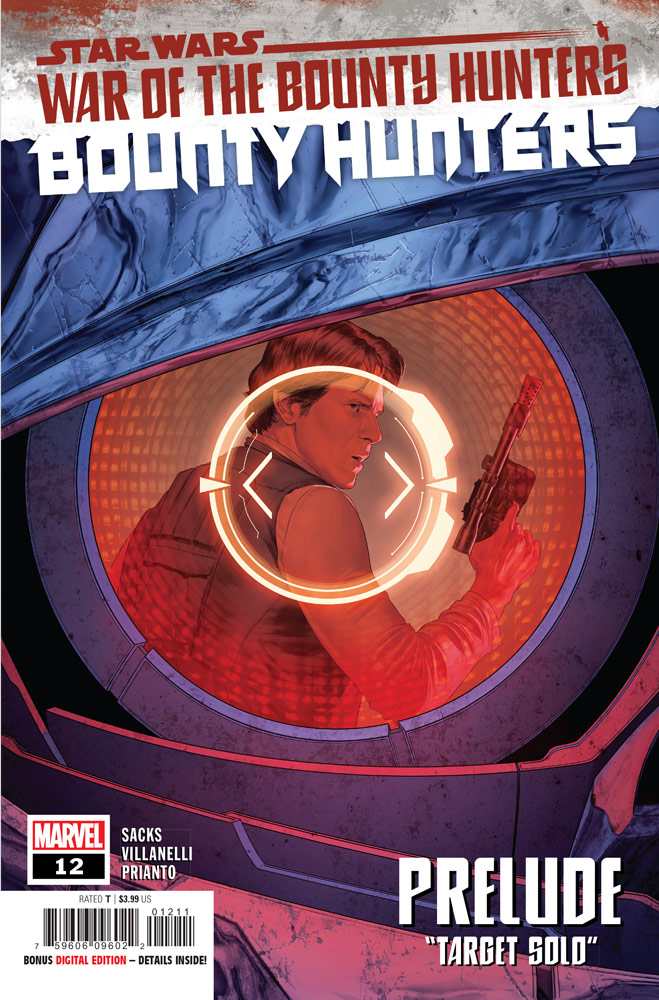 WAR OF THE BOUNTY HUNTERS PRELUDE:

Dengar let it slip that the notorious Boba Fett captured Valance’s old friend, Han Solo. The two rival hunters have come to an understanding in order to find Fett.

Valance now tears through space in a stolen vessel, desperate to pick up the trail before it’s too late….

A misunderstanding is a key element of this issue of Bounty Hunters as we dive straight into the action with Valance and Dengar blasting their way to Nar Shaddaa – a world that’s seen plenty of action recently here in the War of the Bounty Hunters storyline and beyond in The Bad Batch – as Valance comes up with a somewhat direct plan to take out Boba Fett and claim the bounty on Han Solo, while his passenger Dengar has his own thoughts, interrupted by the arrival of Zuckuss and 4-LOM who make clear their intentions by peppering Valance’s ship with fire as Dengar aims a blaster at the cyborgs head, chiding him that his ‘obsession’ with Solo makes him reckless, a remark that sends Valance and us as the reader back into the past, to Abregado-Rae as a much younger Valance joins a gang as a fourth gunman.

Not yet the confident, capable character we know so well, Valance still has to prove himself, and that he does in a brawl after the Pykes learn he works for the Hutts, and as Pykes and Hutts don’t mix he has to fight his way out, and walk away. Back to the now, as Valance takes his ship into an asteroid field to lose Zuckuss and 4-LOM, waking a number of angry Exogorths before Dengar knocks Valance out, taking control of the situation as again we dip to the past. With one of the Pykes dead and Valance blamed after the brawl, he takes the job to make the hit with a mind to get paid and skip Abregado-Rae before any more trouble comes his way. However there’s a twist; his target is none other than his former Imperial academy cadet Han Solo.

Back in the present, Dengar calls of the attack from Zuckuss and 4-LOM, offering them far more vital information than the info they seek, and back to the past as Valance refuses to kill Solo, falling from the higher levels to crash into crates near Solo. Understandably Solo assumes Valance is there to kill him, and leaves in anger as Chewbacca pulls him away to blast off in the Millennium Falcon. We leave the past as Valance whispers a silent ‘I’m sorry’ and rejoin Dengar as he informs Valance, 4-LOM and Zuckuss that it’s Boba Fett who has the bounty on his head, meaning the race to find Fett and Han Solo is truly on.

Another dynamic issue from Ethan Sacks and Paulo Villanelli, winging us as this title does from the uncertain past of the bounty hunter to his action-packed present. With the War of the Bounty Hunters hotting up, we turn our attentions next to Darth Vader and Doctor Aphra, the final two Prelude issues before the main storyline begins. On this form, things are set to hot up for sure. As is common for this title, another satisfying read.