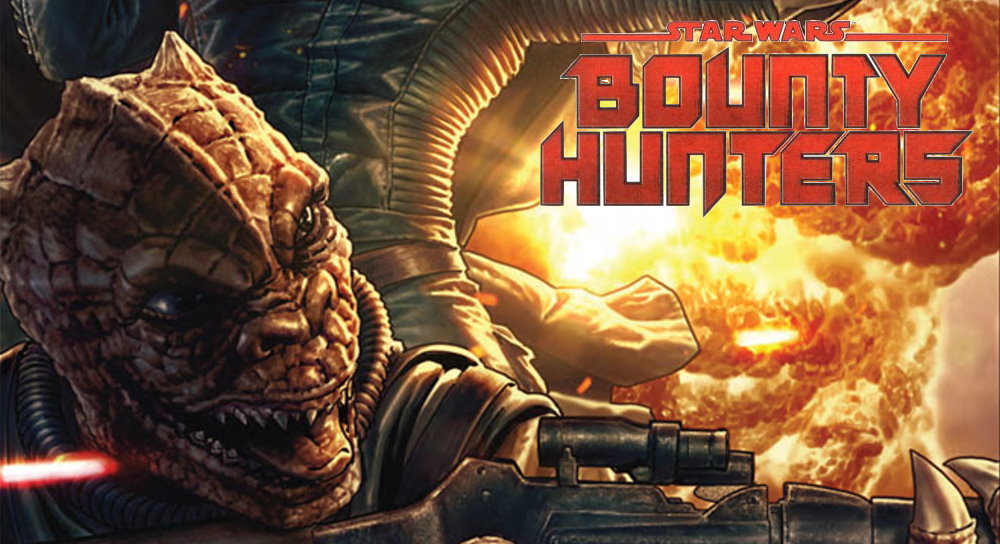 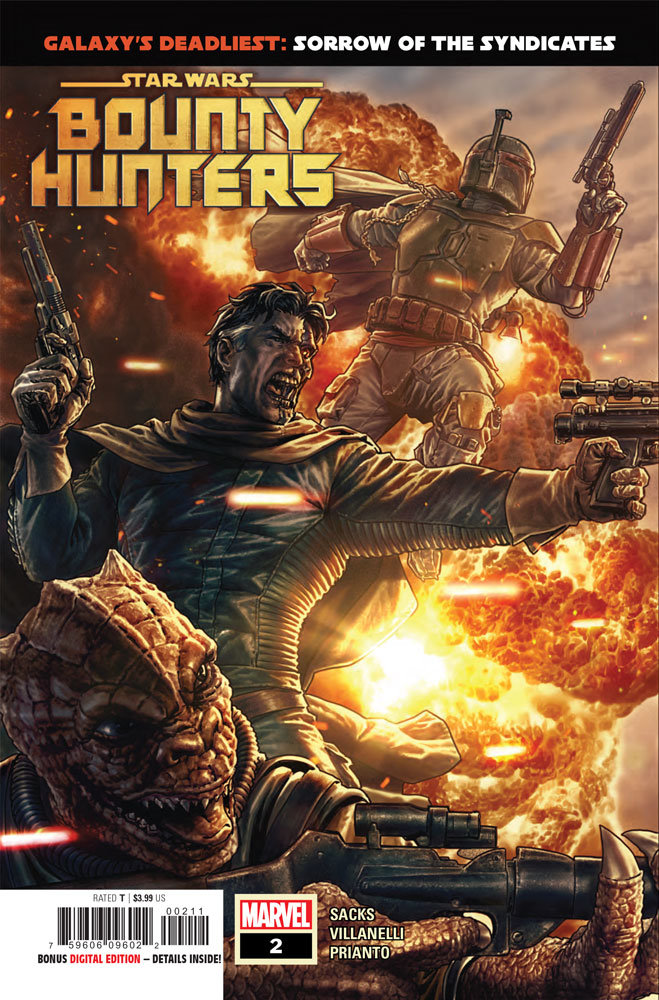 Years ago, a crew of bounty hunters was torn apart when Nakano Lash, their leader, betrayed them by murdering their client, the heir to the Mourner’s Wail syndicate. The crew included Lash, her cyborg protégé Valance, the human T’ongor, the Trandoshan Bossk and Boba Fett.

The Mourner’s Wail and rival organization the Unbroken Clan have been at war ever since. Now Lash has resurfaced under mysterious circumstances, and the galaxy has not forgotten her crime.

Valance, T’ongor’s sister T’onga, Bossk and Fett all have a personal score to settle. The race to find Nakano Lash has begun…

If there was any doubt that the world in which these bounty hunters inhabit was a tough, callous free for all then issue 2 of Bounty Hunters makes it as plain as the snout on a Kubaz face. We rejoin the action on Eriadu, south of Sullust in the Outer Rim on the Rimma Trade Route as Valance and Nine-Four-El sit quietly in a safe house outside Phelar Port, a room full of bodies strewn around them. The cyborg is in a pensive mood as we flash back to Phelar Port a few years earlier and watch Valance first encounter the elusive Nakano Lash. He fights Imperial troops to help a young kid who’d stolen Imperial rations, before being gunned down under heavy firepower. Lash and her cohorts helped him, and one of those beings – a fleshy Abednedo called Jhorstek – was the one who patched him up, and who now lies dead in the room.

A rewiring of the smashed security systems reveals the perpetrator of this massacre; Boba Fett, and despite their being no sound on the recording Valance is able to make out what the dying alien said through the reflection in Fett’s visor; Galmerah, the graveyard world where we briefly cut to see Bossk already planetside. We jump again, this time to Dotharian in Hutt Space where T’onga is infiltrating the Unbroken Clan’s headquarters, where she pledges to Lord Khamed that she will find the woman who murdered his son and her brother, Nakano Lash.

We wrap up the issue back on Galmerah as Valance arrives at the grave of Lash’s parent, finding references to map coordinates just as Bossk arrives to kill Valance and take the map, but not before a huge explosion ends the issue.

Once again we’re treated to a hard-edged, lusciously crafted issue that completely sidesteps any sugar-coating and allows the reader to swallow the bitter pill of life in the Star Wars underworld. This isn’t for the tentative or the timid, and the artwork from Paolo Villanelli matches up seamlessly with Ethan Sacks on-the-nose scripting and galaxy spanning plot. We get around a lot in these issues, a refreshing change in an era of Marvel that can sometimes fill 23 pages with half a page of plot. These characters are constantly on the move, racking up lightyear after lightyear while chewing through coaxium and hard liquor. If they could only turn that dedication to their craft to more altruistic endeavors, perhaps the galaxy wouldn’t be such a dangerous place, but where’s the fun in that?