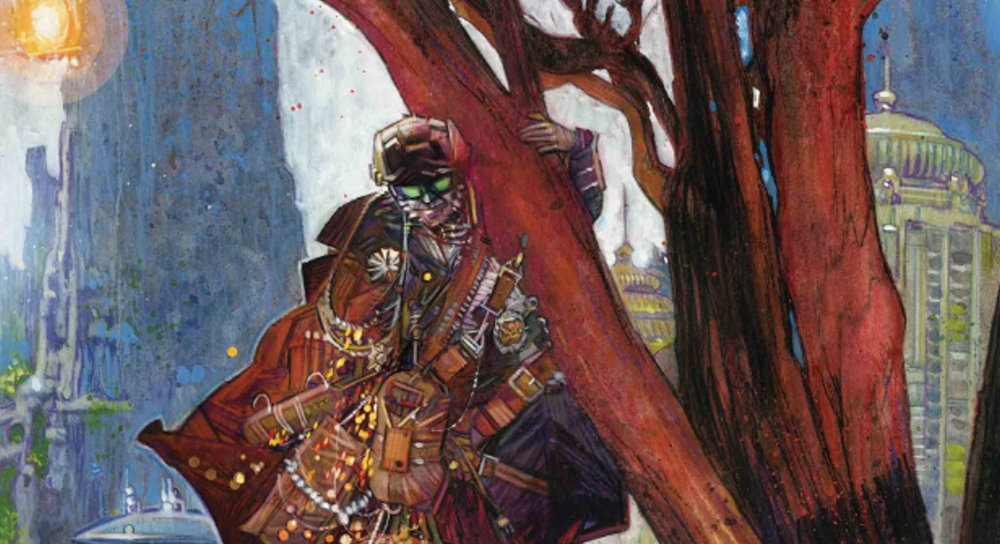 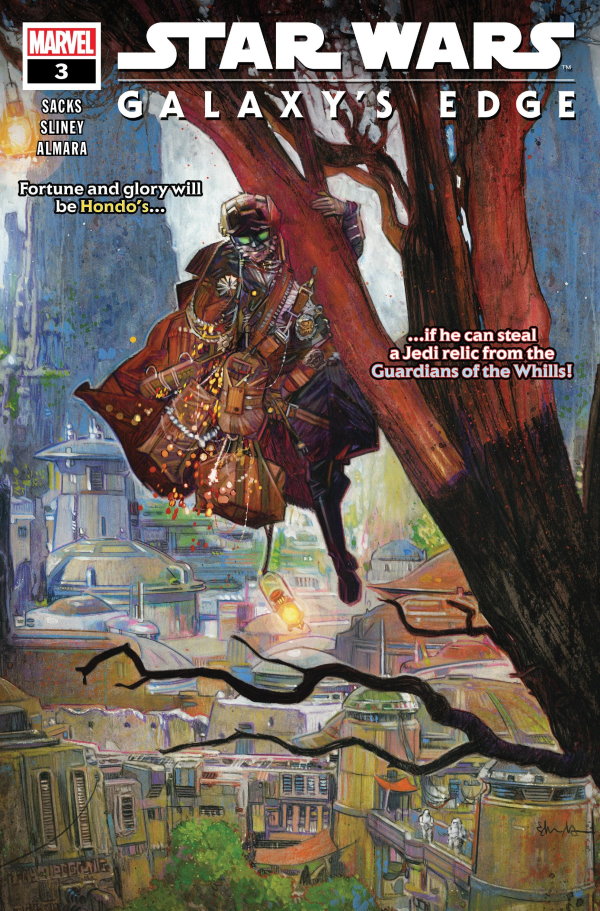 The mysterious Dok-Ondar is known far and wide as a collector and trader of only the most valuable artifacts money can buy. But a trio of outlaws is after a fabled relic that even Dok-Ondar fears…and they’ve hatched a scheme to swindle the Ithorian out of it.

But with the evil First Order occupying Black Spire, time is running out to pull this difficult heist off….

The Galaxy’s Edge limited continues, shifting focus to one of the true rogues – in every sense – of the saga, Hondo Ohnaka. Any time this wily weequay gets a moment to shine is a good one, and this issue is no exception as we join the story mid chase in Merchant Row as shapeshifter Remex is springing through the crowds, chased by First Order troopers, and right into the clutches of Doc Ondar’s Faleen enforcer Varg. We soon shift locations to Oga’s Cantina, where Hondo enters the story as he parlays with Kendoh and her gang, all while Ondar listens in.

Ever the storyteller, Ohnaka takes us back to the early Imperial era on Jedha as a job with Ondar goes sideways. Whv learn why Ondar has such an appreciation for antiquity – it brings him closer to his dead parents – and into the possession of a lightsaber carved statue Ondar needs to take back to Black Spire.

Enter a welcome and familiar face, that of Rogue One‘s Chirrut Imwe, who is sworn to protect the temple and its contents. Hondo and Chirrut tussle before Doc explains exactly why he is taking the statue, to help solve the murder of his parents, and sensing his truth, Chirrut steps aside.

Any time we step into the characters and worlds of Rogue One is a welcome one, a film that expanded the mythical scope of the galaxy with Jedha and the underworld with the Ring of Kafrene (a location I hope we visit again in both of the forthcoming live action TV series). Galaxy’s Edge, much like Maz Kanata’s castle, is another location of that type, like the Outlander Club on Coruscant, Jabba’s court and Chalmun’s Cantina on Tatooine. As a setting for stories it’s ripe with story opportunity and – in a galaxy of hundreds of thousands of system where everybody seemingly knows or has met everybody – plenty of  opportunities for guest stars.

Now open in both locations, Galaxy’s Edge hardly needs the rub from a comic series like this, but the mission – to embed it as an important galactic location – is well underway and via releases like this, most welcome. Ethan Sacks adds more depth to the location, while Will Sliney attractively draws it and the covers by Tommy Le Edwards seriously need some merchandise love as t-shirts, trading cards, posters, whatever suits. They are gorgeous.

Next issue once again doubles down on the old Revenge of the Sith ‘Yoda knew Chewbacca’ trope as Hondo remembers his old pal Doctor Aphra but hey – Aphra and Hondo together? Bring it on, we’ll have some of that! Entertaining, fast-paced and snappy, if this were to morph into a regular series I doubt many readers would complain.