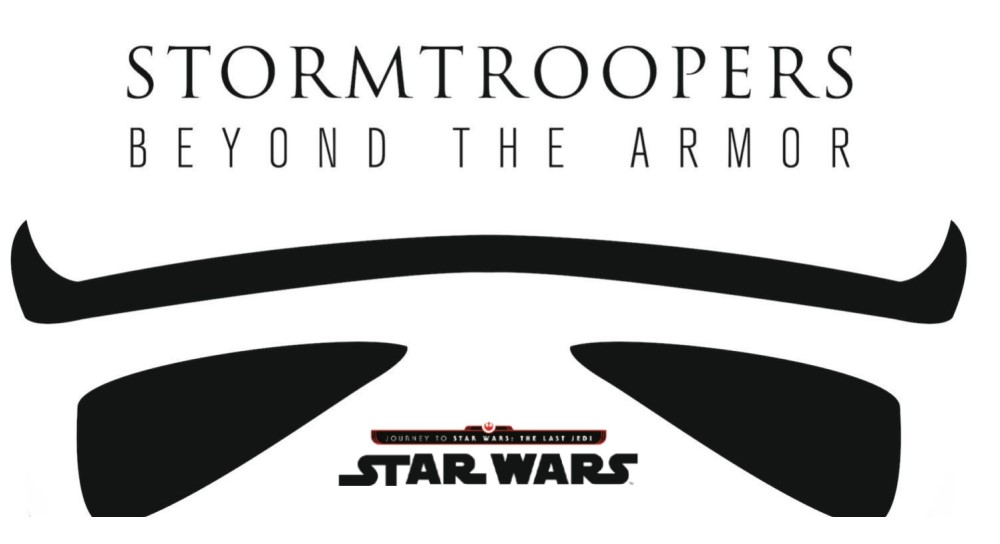 Individually, there can be few authors who can claim to have Star Wars CV’s as impressive as Adam Bray and Ryder Windham. However, put them together on a single project and you have the recipe for Stormtroopers: Beyond The Armor, a book that is not only informative and illuminating but one that sits proudly alongside other essential Star Wars releases. 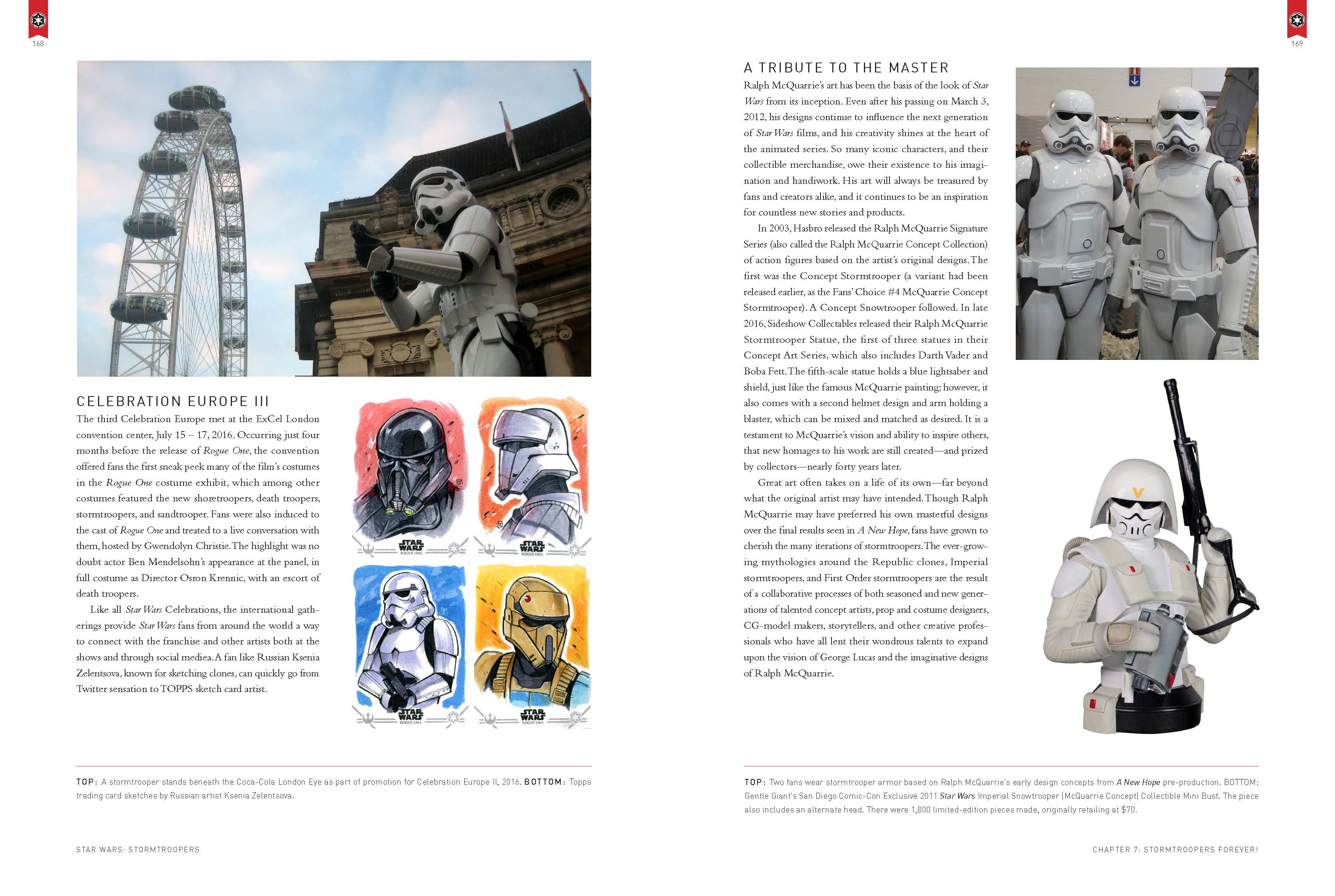 Kicking off with a forward by none other than the sequel trilogies most enthusiastic former Stormtrooper John Boyega, the book works its way through seven chapters that look at different eras and focuses of the Stormtrooper. The first chapter looks at the earliest, pre-A New Hope days of 1976 to 1979 and the very first trooper merch which included most prominently the classic action figures. What investigation of the era would be complete without a look at the now 39 year old Star Wars Holiday Special? Stormtroopers: Beyond The Armor dives deep, and treats every topic with the respect or brevity it deserves.

The Empire Strikes Back saw the introduction of new situation-specific versions of the classic Stormtrooper. Indeed, one of the iconic characters from Empire is the Snowtrooper as well as the AT-AT driver (a childhood favourite figure of mine). 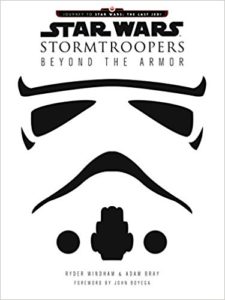 Return of the Jedi gave us Biker Scouts and more, a derivation that is further investigated in the chapter covering 1980 to 1994. Hasbro and Palitoy fans will be interested in the closer look at the vast array of Mini-Rigs and the short-lived but highly collectible Micro Collections as well as Stormtroopers in comics and novels during the dark times of ’87 to ’91. Who can forget thew classic encounter between Leia and another survivor of Alderaan in the armour of an Imperial Stormtrooper? 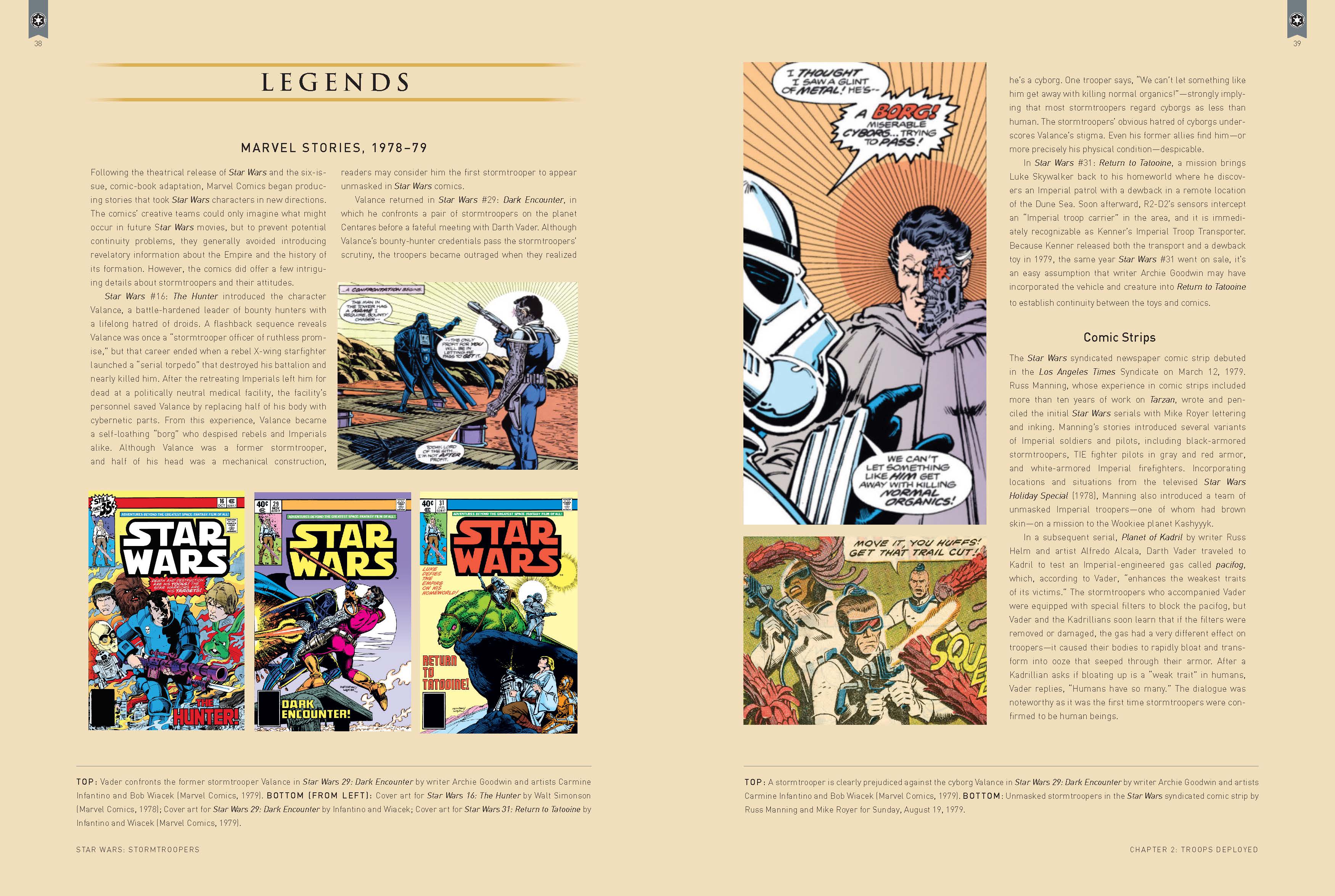 The period covering 1995-2001 focuses on the resurgence of Star Wars with video games, comics, and the Special Editions bringing the film back to front and center in the mind of the public. The Phantom Menace arrived with a bang in 1999, and while not featuring Stormtroopers, kept the saga at the forefront of popular culture. 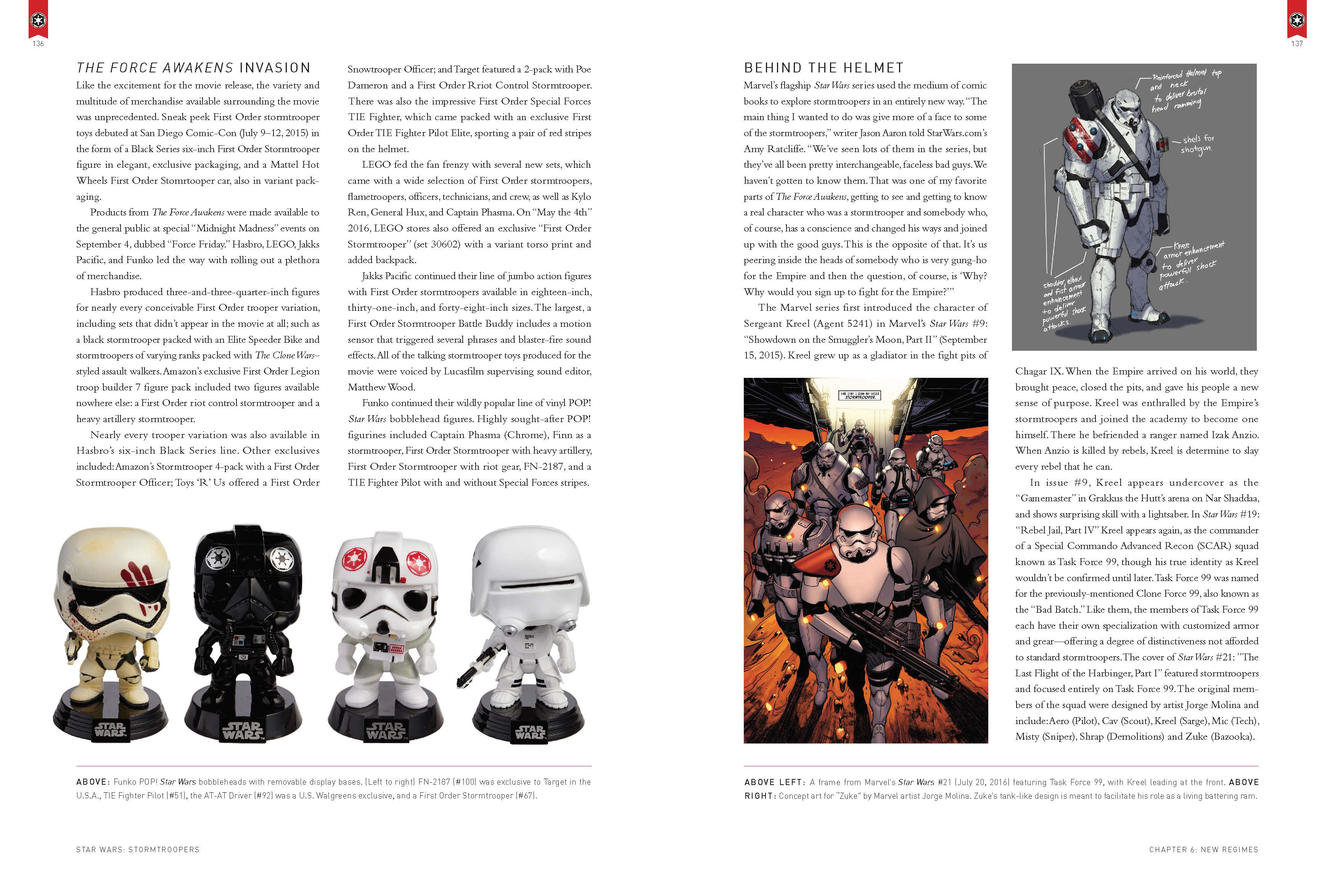 Attack of the Clones saw the return of the Stormtrooper, albeit in tone of its earlier forms in the Clone Trooper. The period from 2002 to 2014 looks at the proliferation of different variations of the Clone Trooper during this busy, busy period for Star Wars fandom.  Stepping forward only 3 years after that time span and it’s easy to forget just how much was happening in that era of the story.

Such an expansive book wouldn’t be complete without a look at the current sequel era, and so the forces of the First Order are highlighted as well as their leader, the fearsome Captain Phasma. Star Wars Rebels, Rogue One and even the Elite Praetorian Guard and Executioner Stormtrooper from The Last Jedi are looked at, bringing this book right up to date. 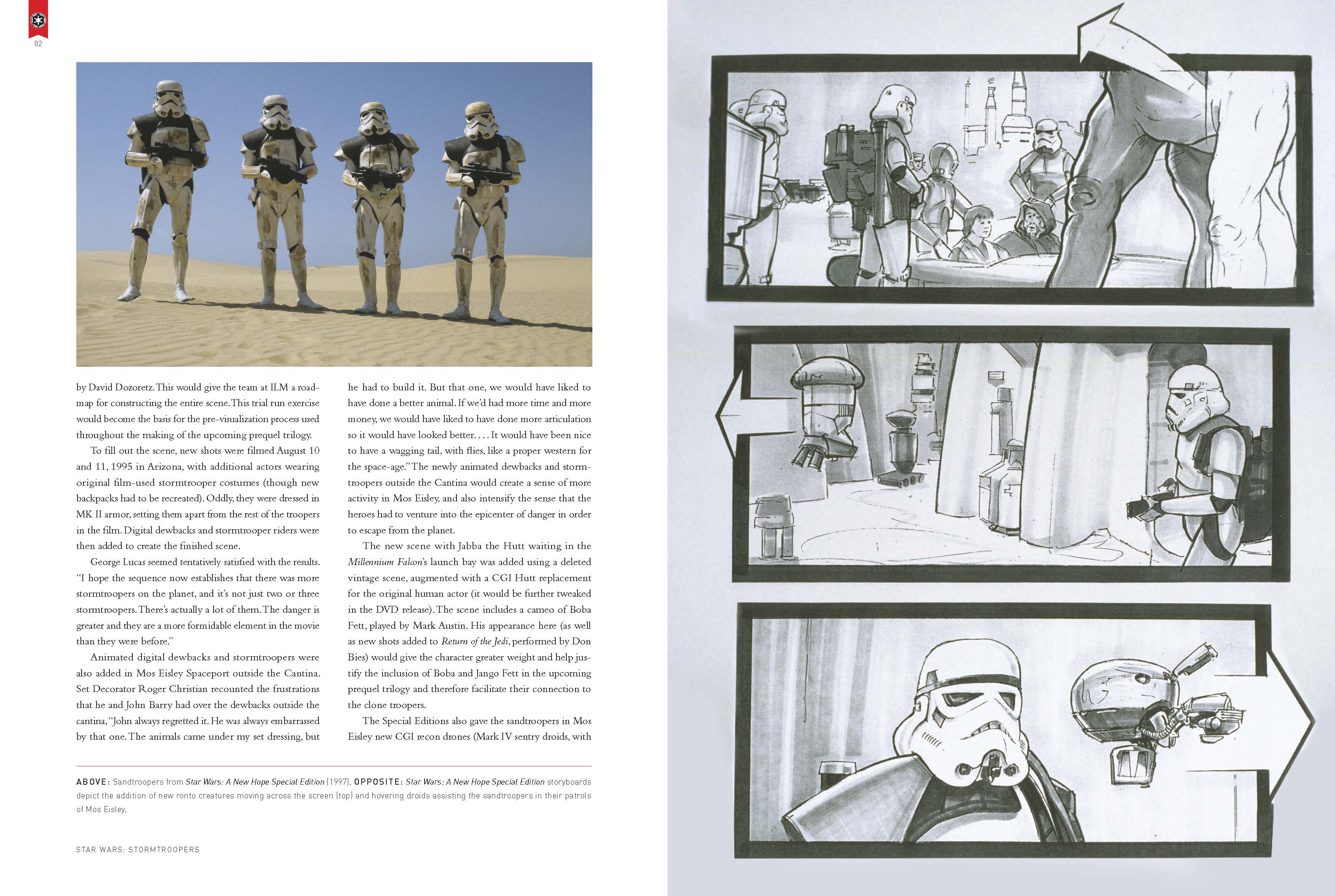 The final chapter delves into the 501st, the world’s largest costuming organization launched by Albin Johnson back in 1997. It’s important not to forget or gloss over the huge impact the 501st and later the Rebel Legion and other costuming groups have had on fandom, and their presence is highlighted throughout the book including many nods to the UK Garrison (of which I have been a proud honorary member for a number of years) and events such as the 2007 Rose Parade, arguably the greatest honour the Legion has ever had.

Littered with double-page pull outs, box outs looking at specific moments, removable pages at the rear of the book giving us Star Wars Scrapbook style looks at Stormtrooper cardbacks, face masks and more as well as collectibles and artwork, this is not only a handsome book to own, and part of the Journey to The Last Jedi no less, but an essential tome looking at one of the key elements of the wider Star Wars story. No doubt about it, these bad guys did good, and you would be doing yourself some good by purchasing this  must-have hardback.

Many thanks to HarperCollins for the review copy.