Our series of interviews From Different Points of View highlights Star Wars fans from across the world and allows them to tell you about Star Wars fandom from their point of view, how it has influenced their lives and the direction it has taken them.

This week’s different point of view is from the United States, and it is Dayna Tran. 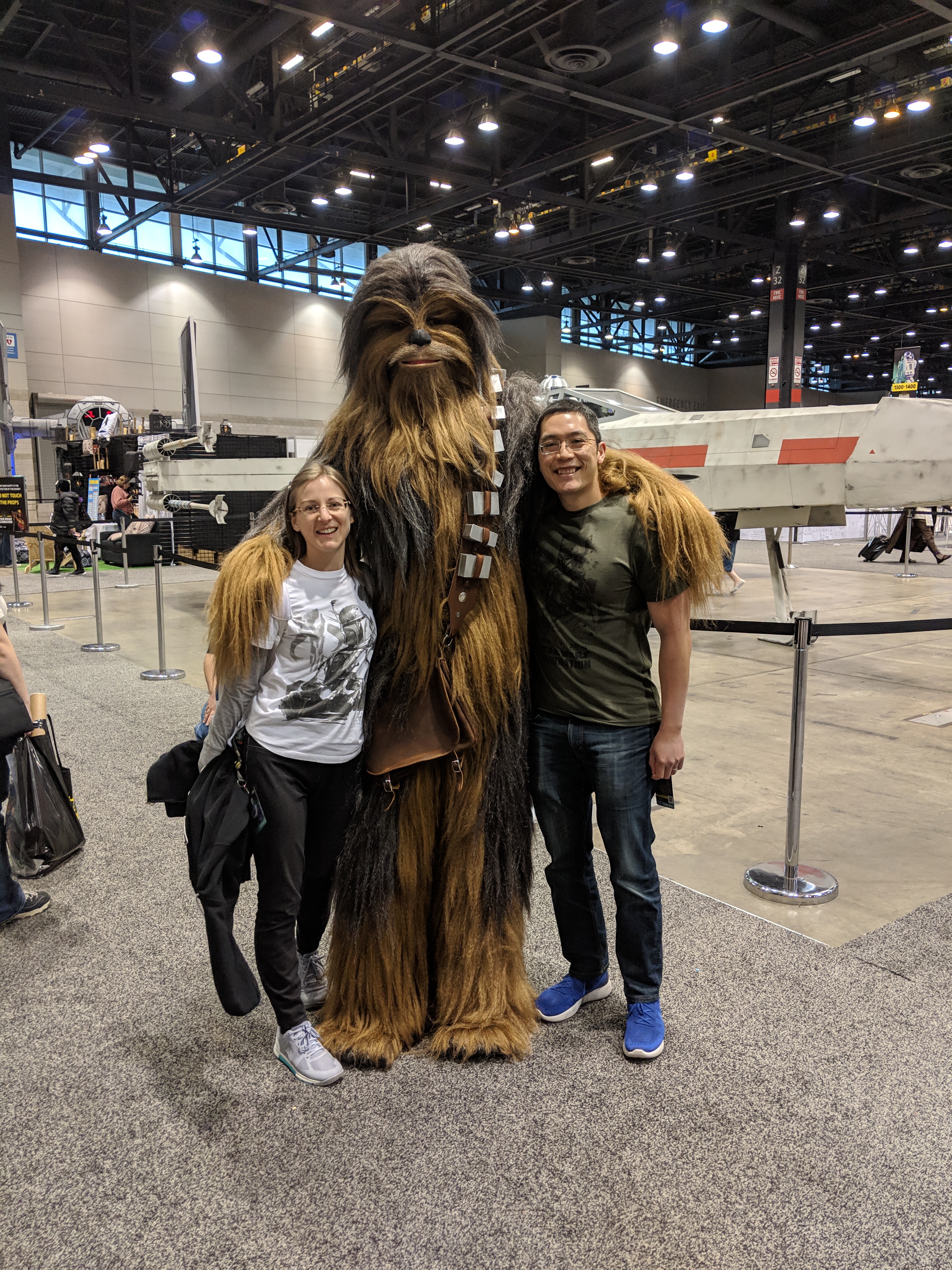 The summer of 7th grade. A girl came into dance class and declared that she couldn’t dance that night because she had to be ready to go in her street clothes to go wait in line to see The Phantom Menace. I went home to my mom and told her how crazy it was that this girl couldn’t even dance because she had to go see some movie. My mom laughed and realized that I and my brother had never seen Star Wars, so maybe we should at least see what all the fuss was about.

My parents borrowed the VHS tapes from some friends of ours and the tapes sat in our house for a month. Finally, my mom said she needed to give the borrowed tapes back so we better watch them. We finally sat down to watch one that night. I don’t know why we waited so long! We both loved the movie (A New Hope). That summer we watched AT LEAST one Star Wars movie a night! My brother grew up normal, I however, went on to be a nerd.

I was drawn in by the characters. I still am. You would think as an engineer I would be into the ships or something, but no, I was a Luke Skywalker girl. I know, I know, weird since most girls are Han Solo girls, but, what can I say, I like the hero, the good guy. (I also happen to love Captain America too.) (I see a trend don’t you?) 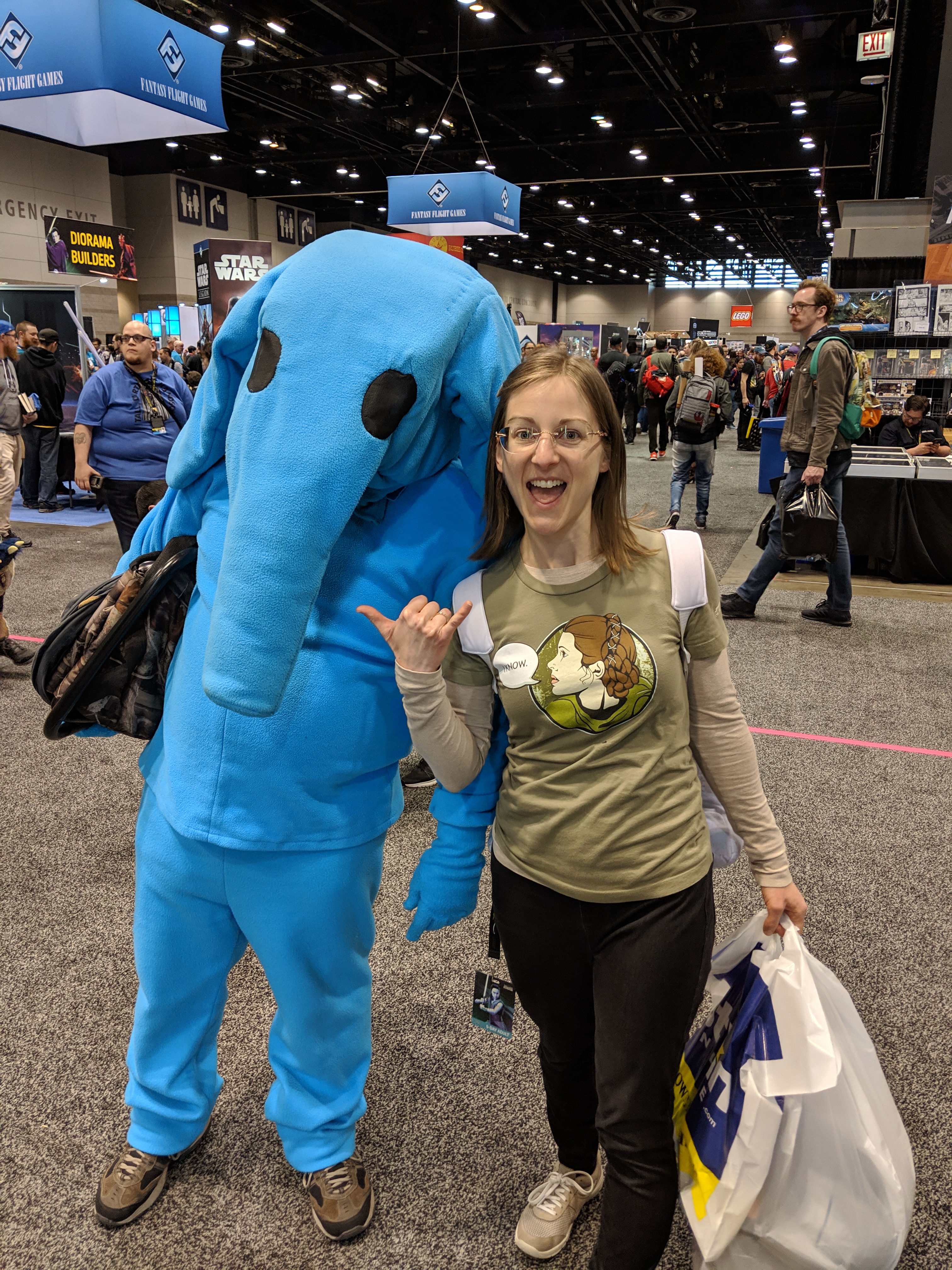 Oh man. Star Wars is all over our house (my husband and I). Our son, LUKE, is 2 years old and already learning characters names just because he is so immersed in it. We don’t plan to show him the movies until he is about 6 though.

It gave me joy and escape while I studied in school. I loved listening to the music of John Williams while working on homework and studying. I could even put the movies on in the background while studying because I had seen them so many times that I didn’t even need to watch the screen. 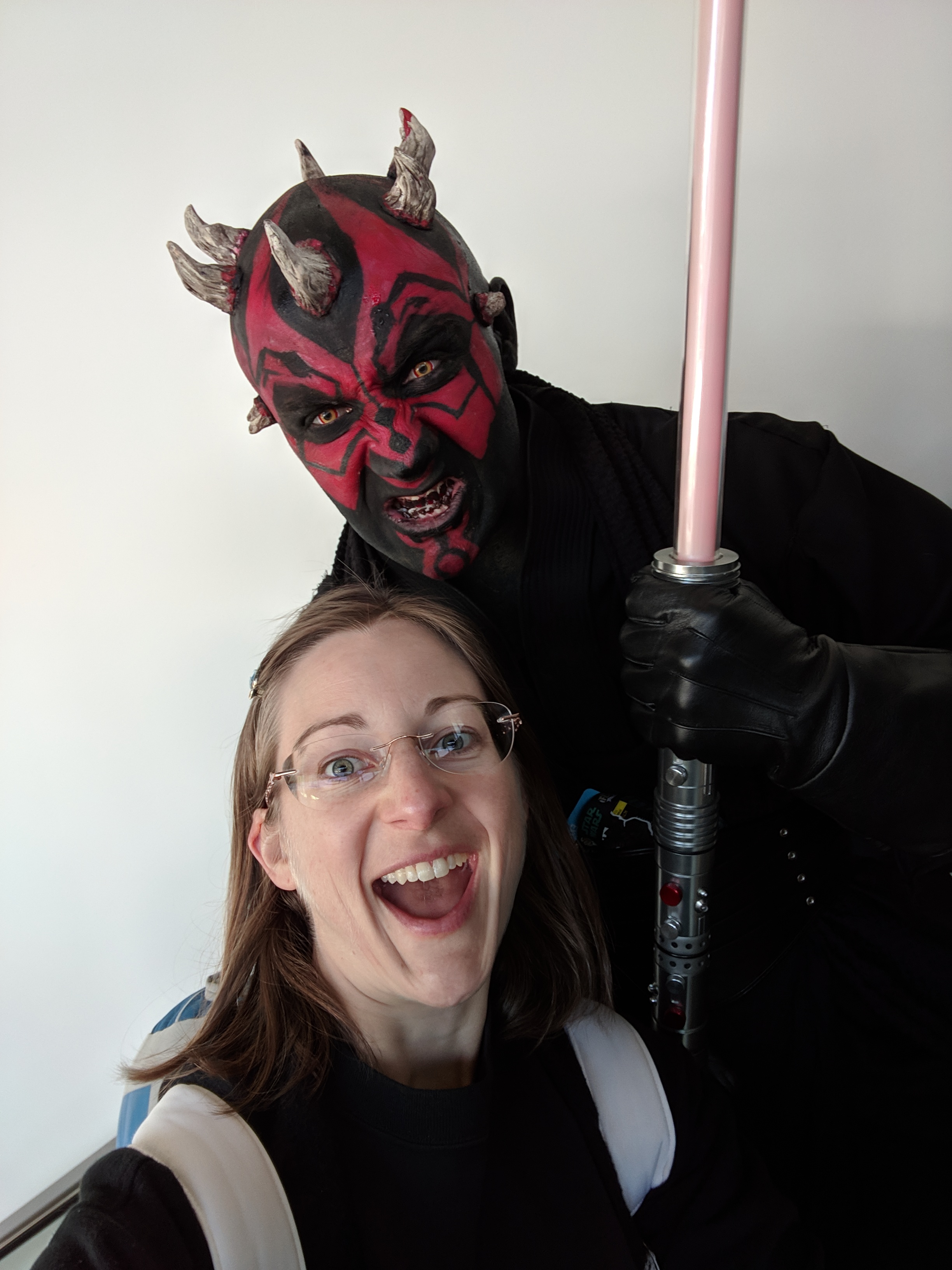 Star Wars Celebration III in Indianapolis. I was a freshman in college at the time and I remember telling my parents that I would be driving to Indianapolis for this Star Wars convention, with or without them. They didn’t want me to go alone, so the whole family went. All of them combined don’t even like Star Wars as much as me, but they went anyway to support me. We had an amazing time. I just remember thinking that this was as close to heaven on Earth as I would ever get. (Other than the 6 hour line at the Celebration store…) 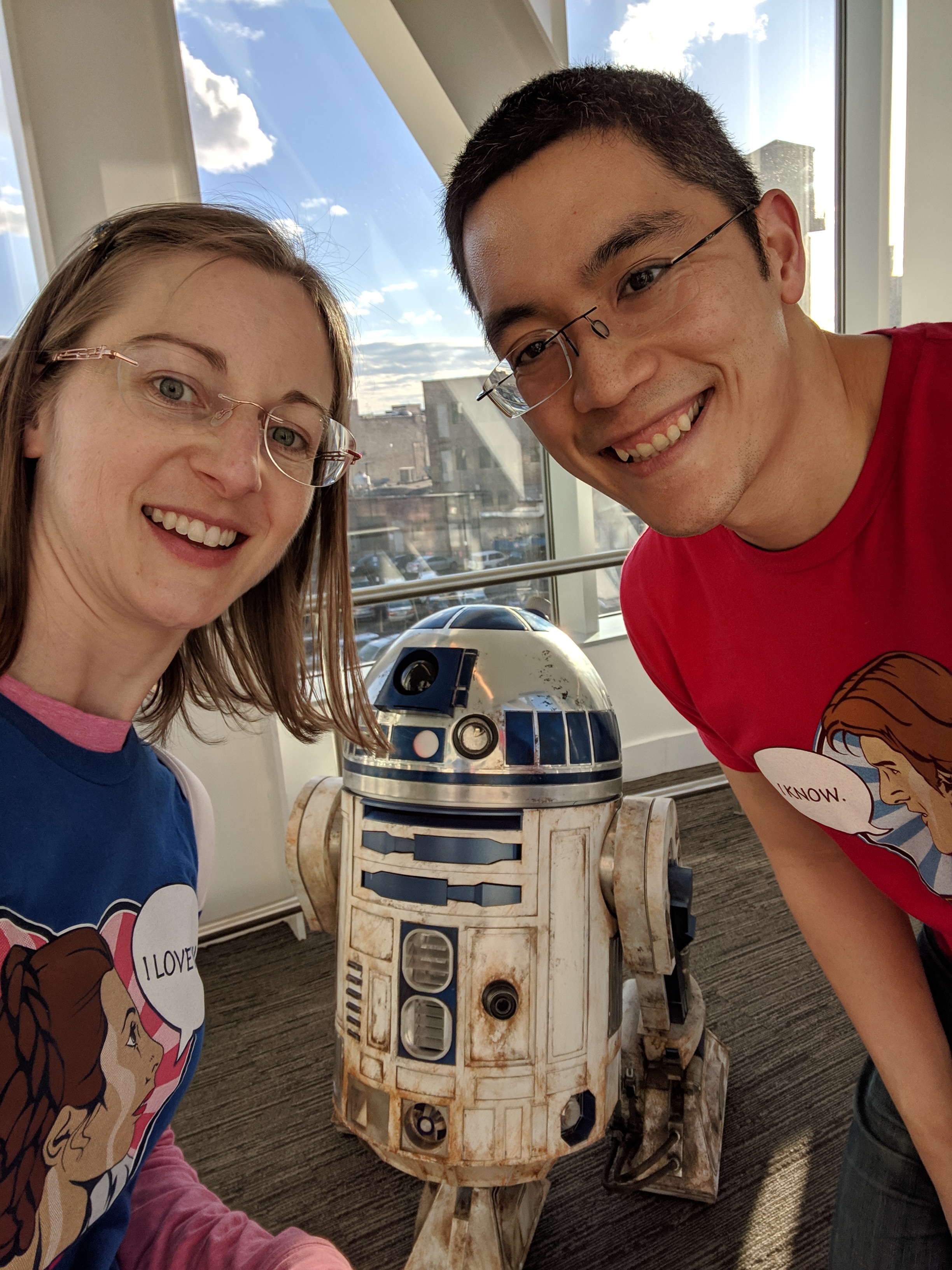 My husband and I always wanted to cosplay. We just have never found the time to. We are not great DIY people. I did however have someone make my wedding dress to be fashioned after Padme’s in her wedding. I wore it to the following celebration!

I collect random stuff. Right now the walls are plastered with posters and such. The basement is full of cardboard stand-ups. My favourite collection are my t-shirts. I have enough (and more) to wear one every day of Lent. And so I did. I am always on the lookout for women’s Star Wars t-shirts (harder to find, but look out when I do!).

I have been to 4 Celebrations so far! They are my favourite way to celebrate because that is what everyone else is doing! 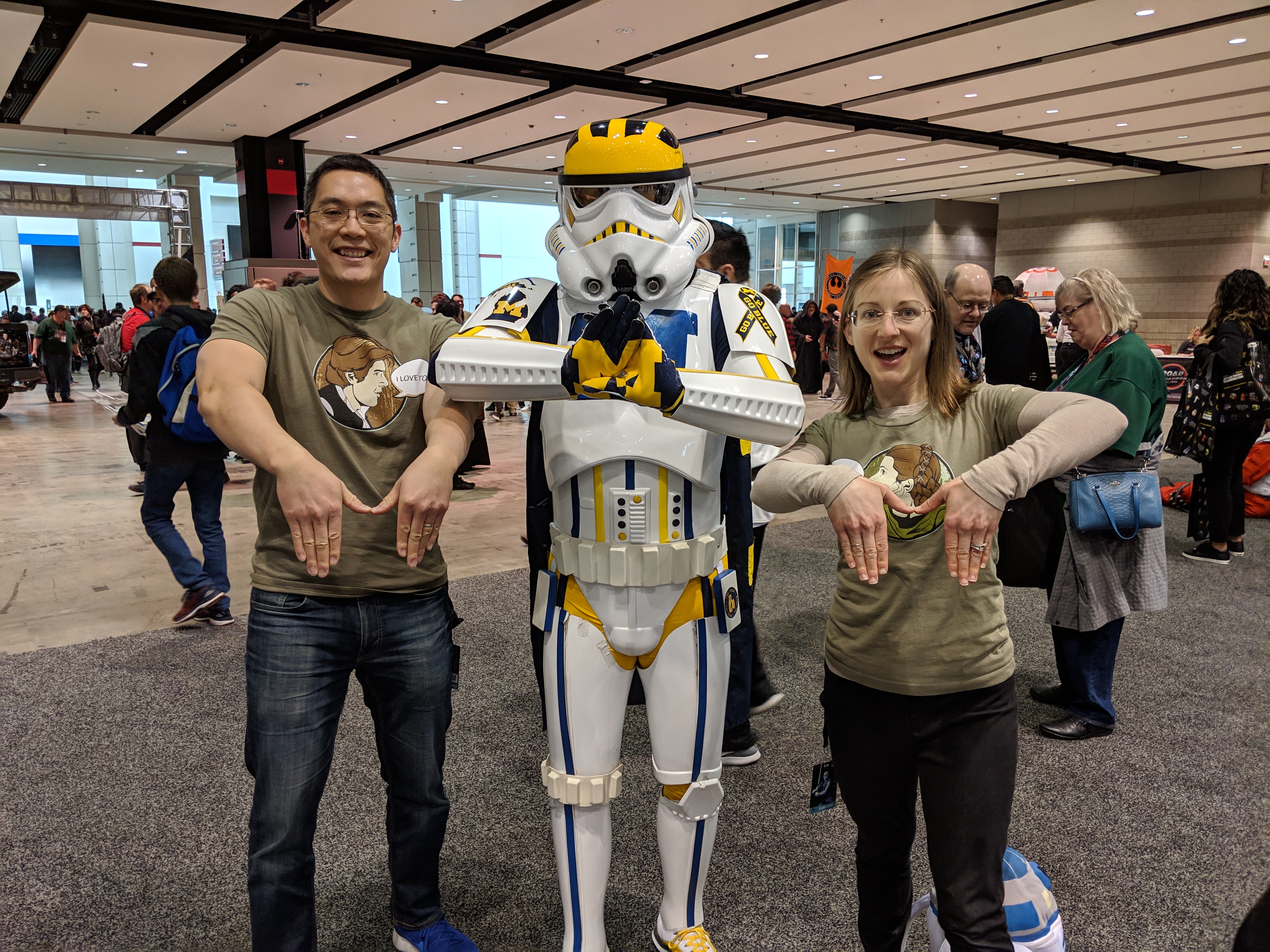 Just being able to nerd-out and talk about characters and events as though this is real life and knowing that the other person just really gets what you are saying.

I also love the positivity at the celebrations. Some “Star Wars fans” are really mean on social media, so I love going where everyone is super positive and there is no room for judgement or negativity.

Save money for a trip to Galaxy’s Edge! It may take a few years before we can get there with our son, Luke, but we are already looking forward to it! We also can’t wait for the Mandalorian to air! And obviously going to see The Rise of Skywalker.  We are hoping to get back into the Star Wars comic books now that life is calming down for us. One day maybe we will have time to cosplay – we have been talking about Mandalorians …

I LOVED SOLO! I know it didn’t do well in theatres, but oh man, I would love to see more movies like that or a sequel. If that can’t happen (for obvious business reasons on Disney’s part) then I at least hope that The Mandalorian does well and can have MANY MANY seasons! We got to watch a clip at Celebration in Chicago and oh man, I literally screamed! (And I am NOT a screamer!) 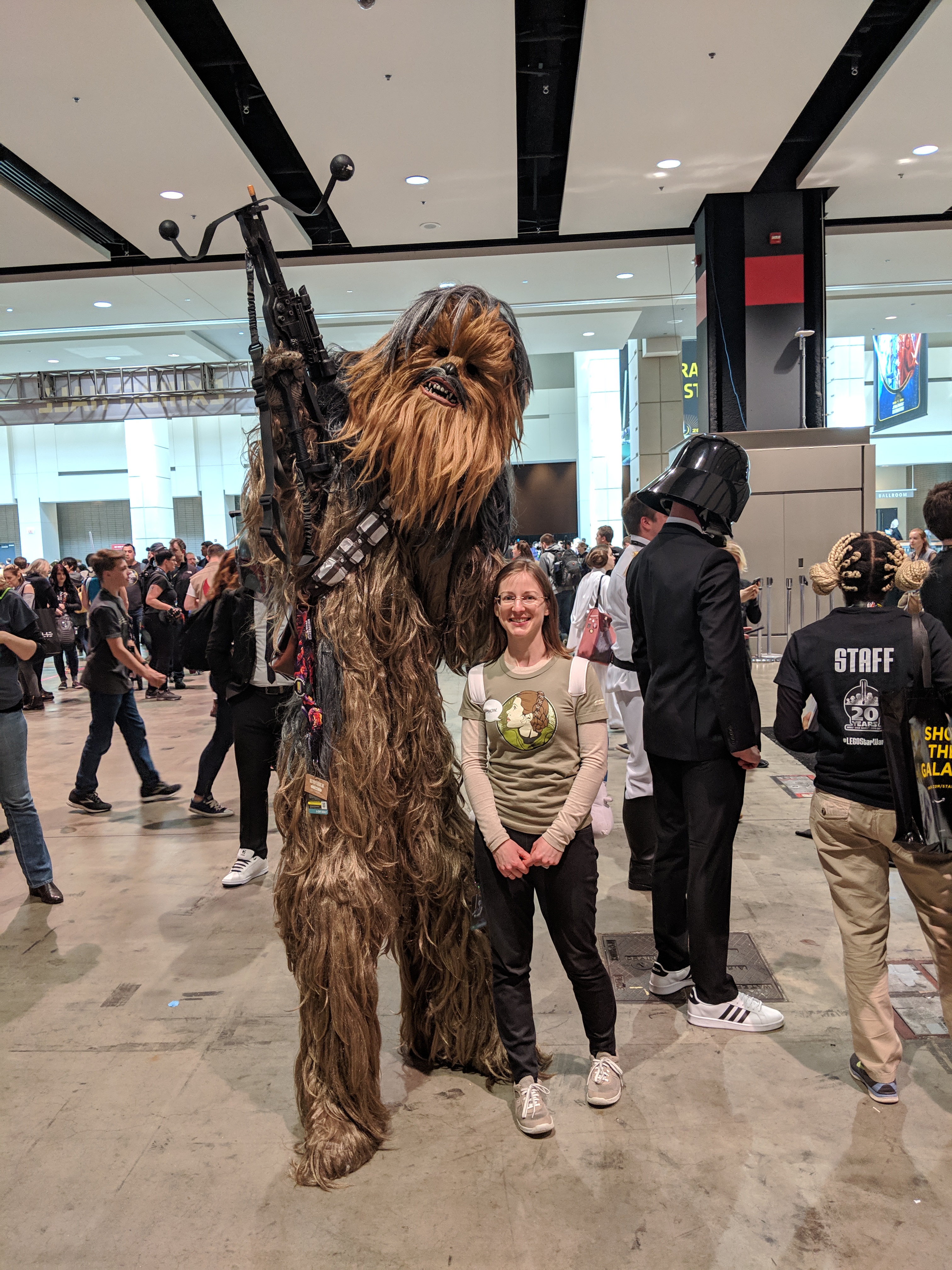 Rey + Kylo = Reylo? IDK. I like the thought of them having some kind of connection and bringing the force and galaxy into balance, but I am not sure that is happening. So let’s see… an Obi-Wan movie? A “Jar-Jar Binks is a Sith Lord” movie?