This week’s point of view is from the United States, and it is Becca Benjamin. 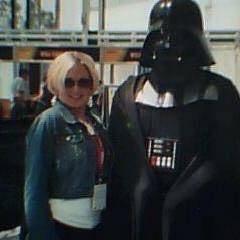 That’s a difficult question to answer. I first saw Star Wars as a soon-to-be, 4-year-old. I just remember being mesmerized by how gigantic it was and for some reason, my sights were set on the man in black, Darth Vader. So, I guess to answer your question, Vader drew me in. It was love at first sight!

Gosh, I don’t know? Probably in every way. To be honest, I can’t think of a time where Star Wars hasn’t been there. Not just in mementos around the house or in my office where I work, but Star Wars is practically in everything I do. So, I agree with Carrie Fisher, Star Wars is something you do, it’s a verb.

Being asked to pick just one is so uncivilized (laughing). If I had to pick just one, which in this case I do, I’d have to say meeting Carrie Fisher in person at Star Wars Celebration IV back in 2007. Those few minutes mean everything now. 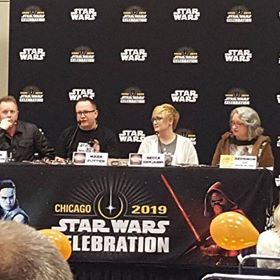 How do I celebrate my fandom? Well, by talking about it, incessantly. I own and host two bi-weekly Star Wars podcasts, one, “Tarkin’s Top Shelf,”  is solely based on Star Wars literature and how it melds and enhances what we see on screen. The other, “Kanata’s Castle,” is a Star Wars podcast designed and geared to fit every fan, no matter where they are in their journey through Star Wars. In other words, it’s rated “E” for everyone!

Bridging new ideas! Fun debates on the “what ifs” and the “coulda, shoulda, woulda” aspects of the galaxy far, far away. Star Wars was meant to be ambiguous, Lucas designed it that way and that’s how it should stay.

To see a journey, one as old as time, come to an end. It makes me sad but in a way, it’s bittersweet. I started this adventure with the Skywalkers and thankfully I’ll be able to watch it come to a close. As they say, when one door closes, another opens.

I look forward to what’s in store for Star Wars and the bridging of new storytelling in the galaxy far, far away.

This is a hard one, but I’d love to see what happens next with Ahsoka Tano and Sabine Wren. Ahsoka has become such a fulcrum, no pun intended, but she certainly has become a centre point of the saga and she deserves to have her story told in completion.

A healthy, mother and daughter relationship, not just a scenario, but a leading element in the plot of a story. Hopefully, I’m around to see it.