This week’s point of view is with Lakota Schultz. 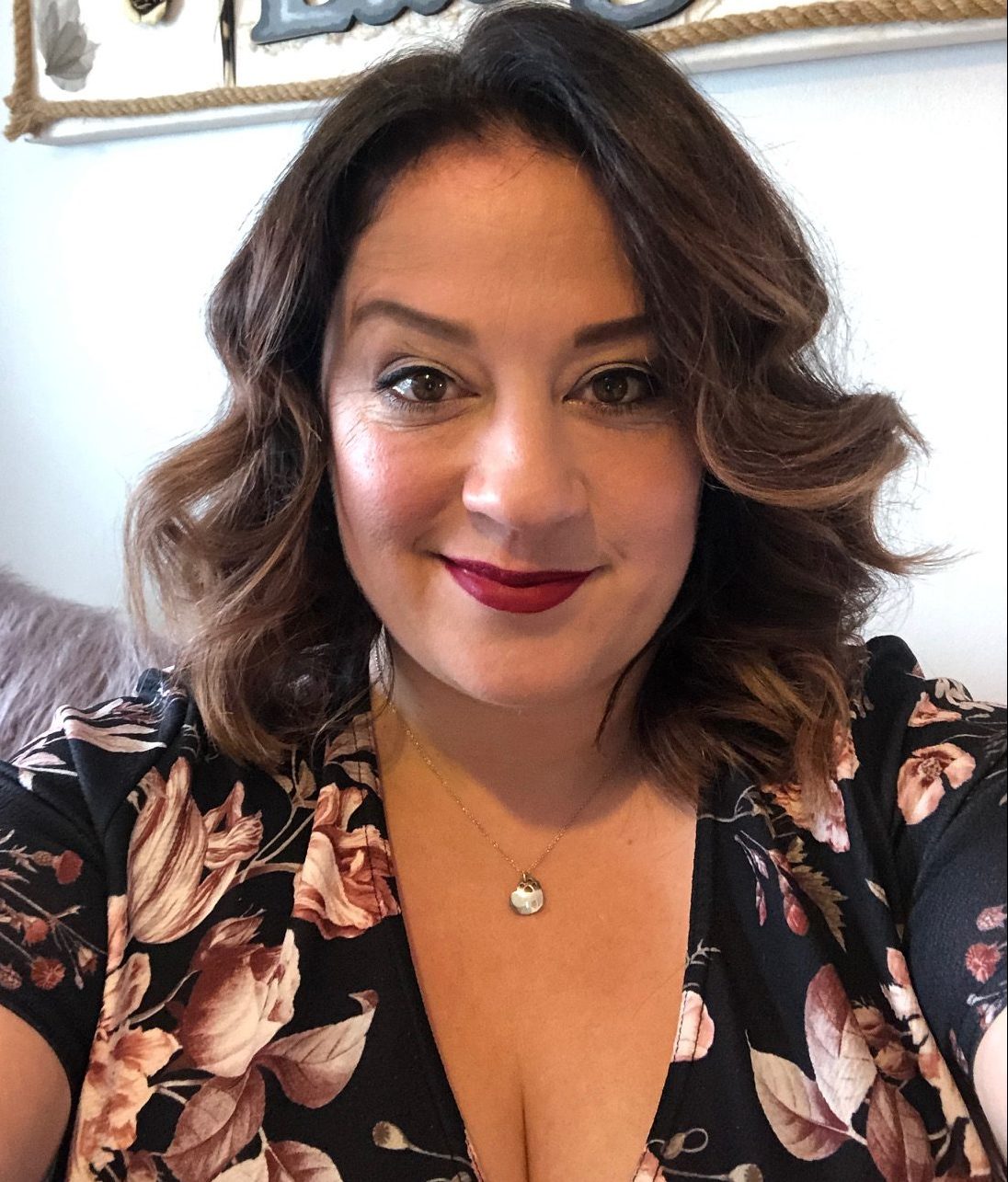 I was probably around 5 years old, back in 1980. Star Wars was on TV and my brother and I were mesmerised. There was a princess that had a gun, and she was just as cool as the boys. It was the first time I didn’t feel like I had to like “girls toys” but still have girl characters to play with.

Star Wars stretched my imagination as a child, gave me a love for creativity and an appreciation for classical music scores. In the 90’s, when we all thought Star Wars was a thing of our childhood, never to be seen again, the Thrawn Trilogy re-ignited a passion for reading that kept Star Wars alive. The Rebellion’s message of Hope that threads through all 3 trilogies kept my own hope alive during challenging times in my life, and Carrie/Leia gave me my sense of independence and adventure. 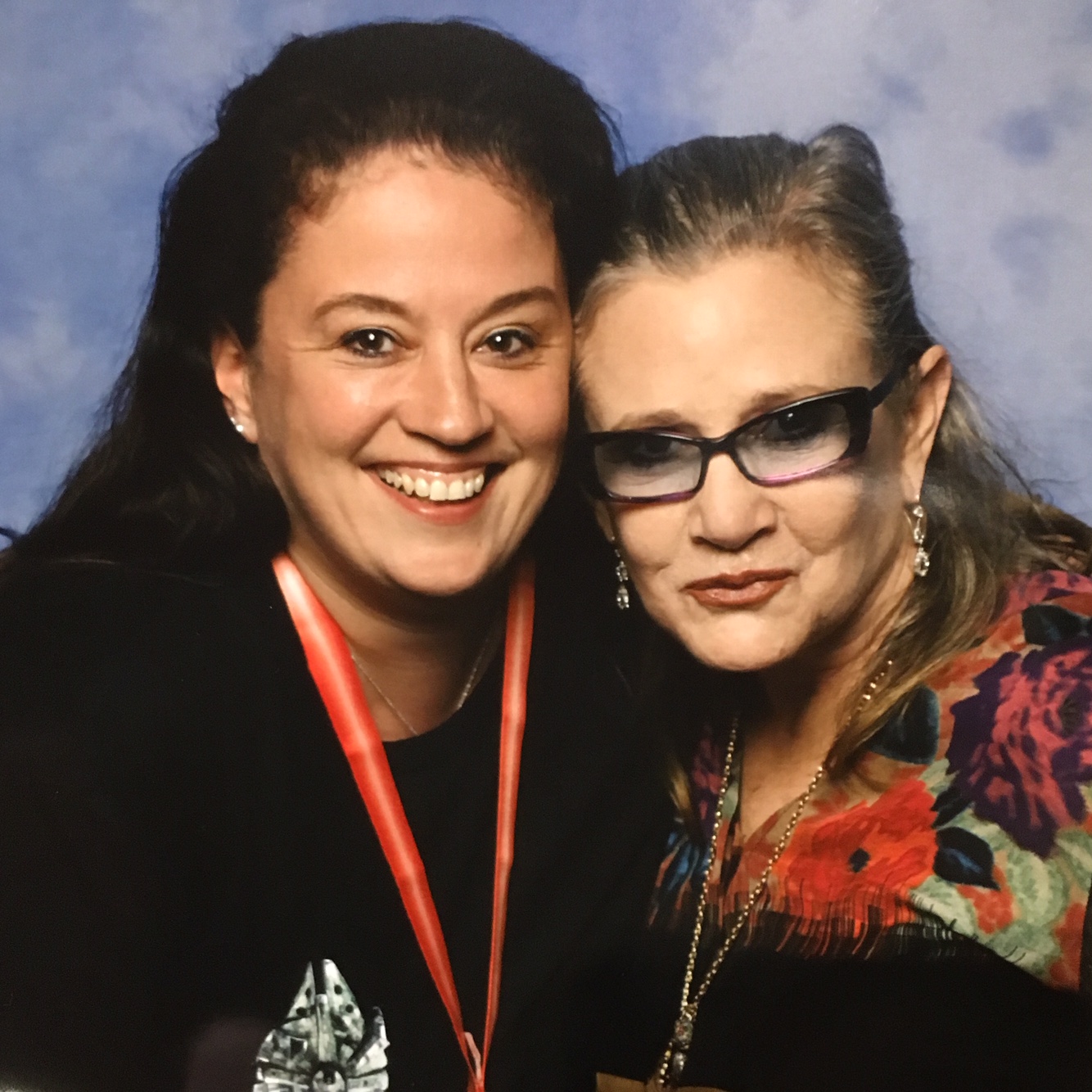 Meeting Carrie Fisher in 2016 at Celebration Europe. I remember being insanely nervous- after nearly 40 years I was finally going to meet the woman who had been such a huge influence in my life. I remember she was sitting on a swivel stool, and the chair rotated her away from me. She cracked up laughing, saying “Omg this chair is so rude!! Come here” and then she gave me a huge hug and we posed for a photo. I was on such a high for weeks!!

Sadly, not even 6 months later, our Princess was gone – and I still well up just thinking about it. 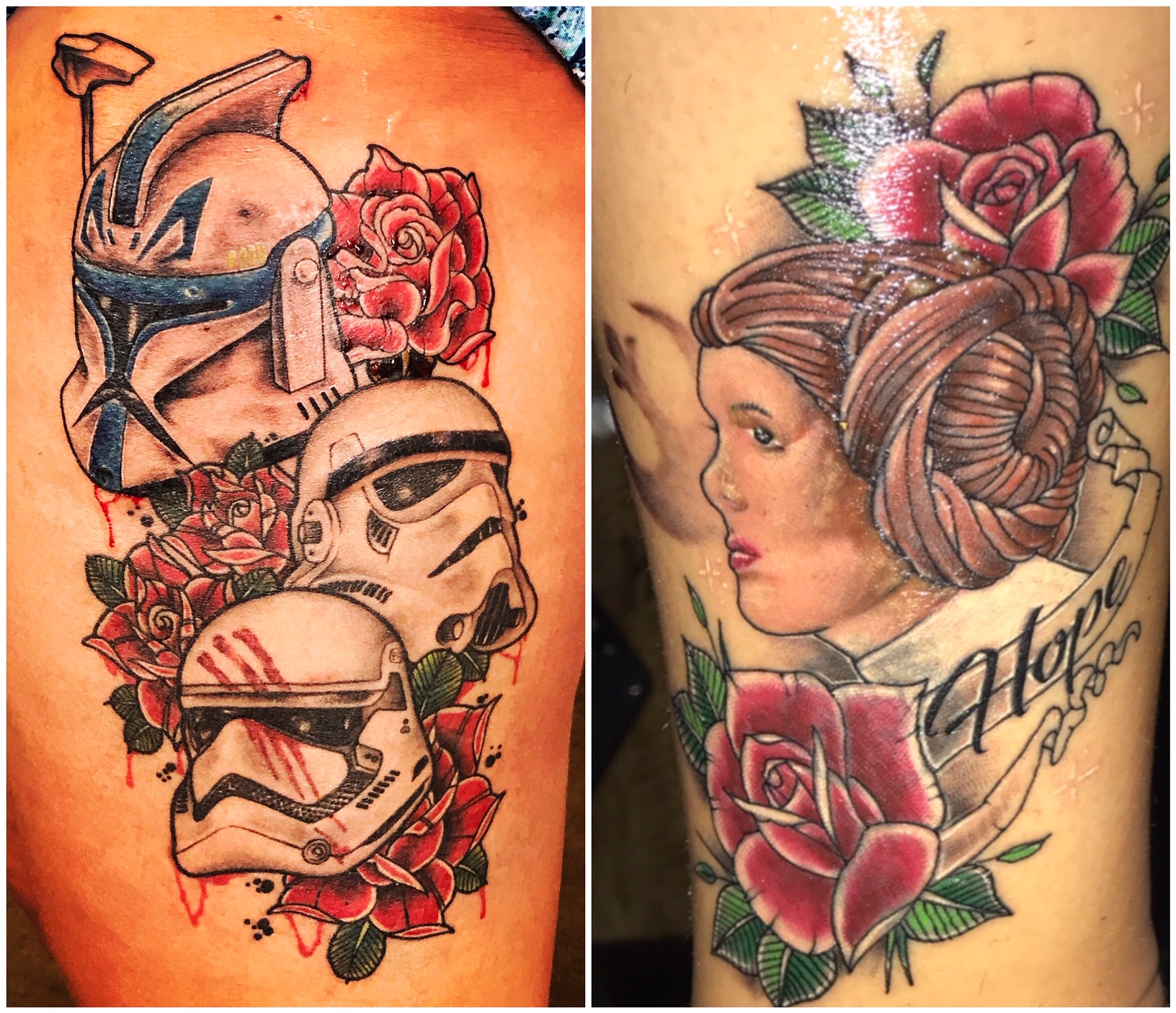 I have two Star Wars tattoos- a  large thigh piece with what I explain to my non-Star Wars friends as “3 generations of Stormtroopers” (I have Rex’s helmet, a TK helmet and FN2187’s helmet) and a Rebellion tattoo with Leia on the inside of my right shin. 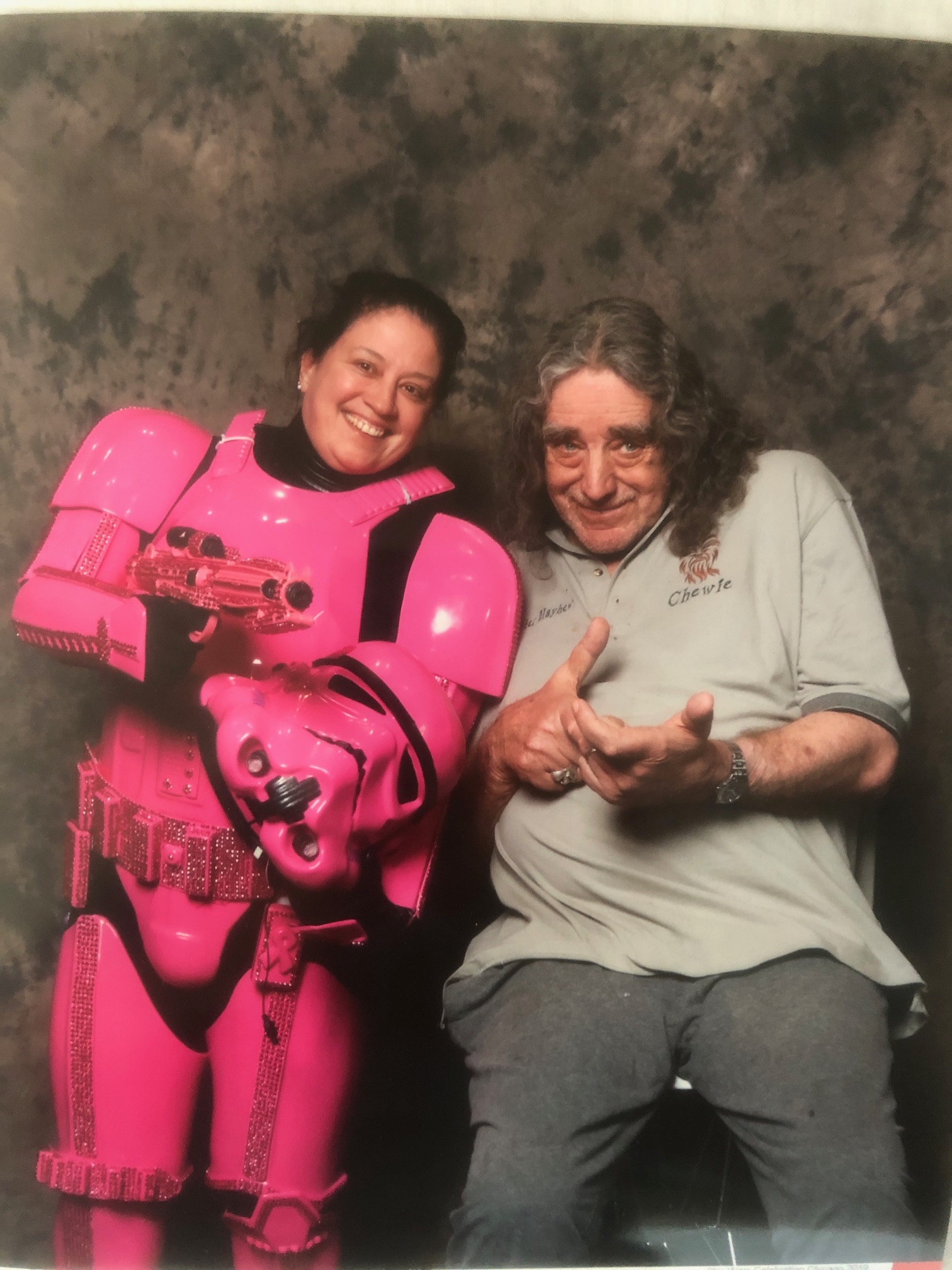 Last year I took the plunge and decided to build my own cosplay too, at the grand age of 42 so built a pink TK with pink diamante trim. It’s my Pink Party Trooper. Built from scratch, I took it to Celebration Chicago with me – I wore that to meet Peter Mayhew, who took one look at me, said “Oh Bloody hell that’s brilliant!!” and then cracked up laughing.

My first day in armour was such a buzz, I still can’t believe how much notice it got despite being surrounded by really talented cosplayers!!

I also admin 2 Facebook pages – one fan page (Docking Bay ’94) and a Book Club called “Star Wars Book Nerds” which has connected me to some fantastic people in the fandom!

It doesn’t matter where you are in the world, people know Star Wars. Wear a Star Wars t-shirt or bag, and someone will start up a conversation. I have made some incredible friends thanks to the Star Wars community, and it’s the shared love for the franchise that holds us all together 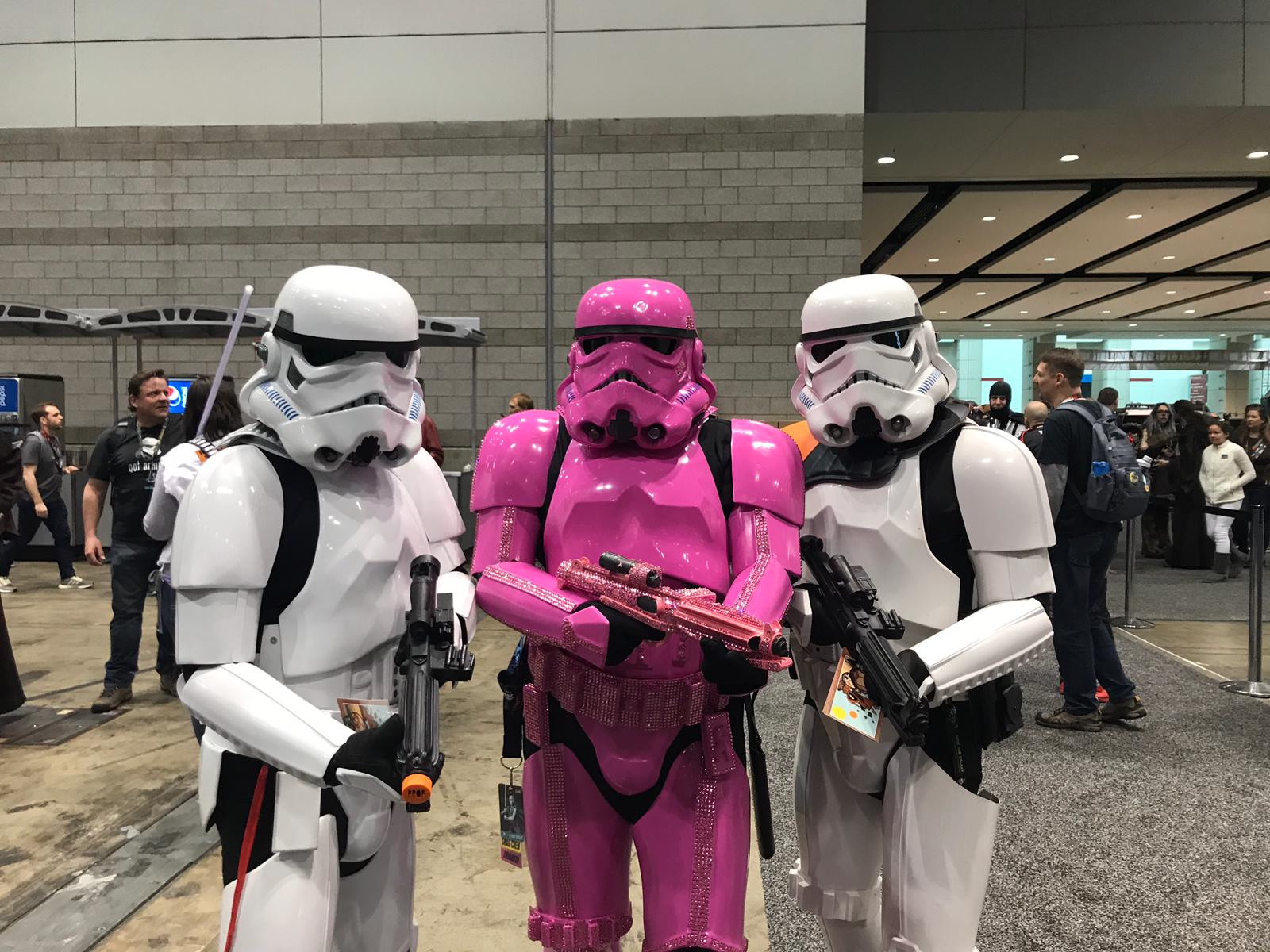 I have just joined a couple of local garrisons with my Pink TK, and really looking forward to doing my first official troops with them, and have just started to build an Iden Versio, which I would love to get 501st approved.

Celebration Anaheim is definitely on the cards next year, and my big goal is to stay at the Star Wars Hotel when it opens at Galaxy’s Edge.

The Mandalorian looks EPIC- was lucky enough to get into the panel at Chicago where they played 10 minutes of one episode. It looks and feels like OT Star Wars.

The Rise of Skywalker obviously, although I am nervous about the saga ending, I loved this sequel trilogy and cannot wait to see what J.J. does to close this chapter. I also am nervous, hopeful and excited to see how Carrie’s footage has been written in to the script. Seeing Leia again knowing she wasn’t really there will be bittersweet and emotional.

Books wise, there are so many exciting books to look forward to. Thrawn: Treason to close off the new Thrawn trilogy, and Delilah S Dawson’s Black Spire to take us through Vi Moradi’s journey after meeting her in Phasma. It’s an incredible time to be a Star Wars fan!!! 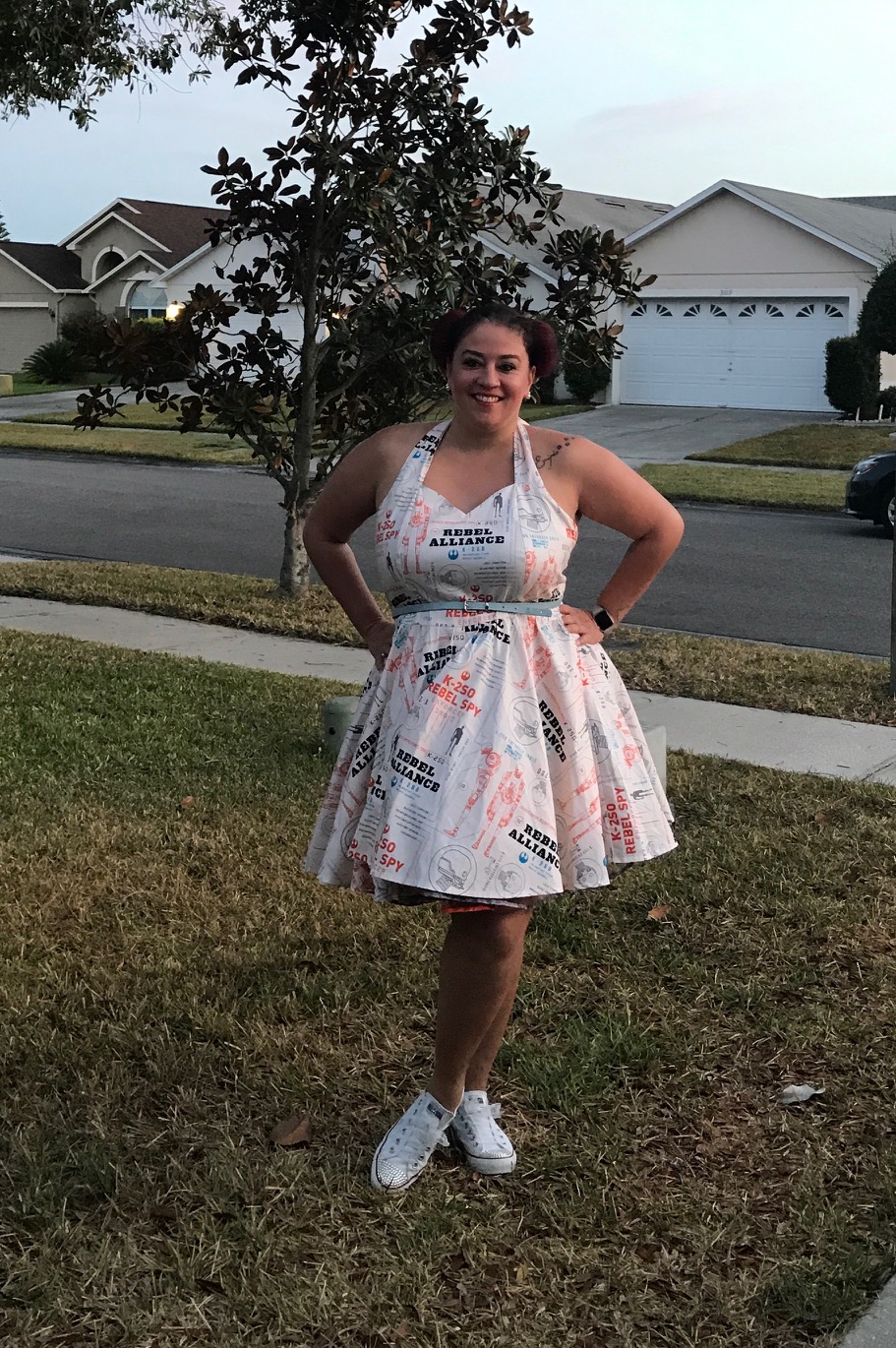 Ahsoka…. I need more Ahsoka in my life! There are so many gaps in her timeline that needs filling. The moment in the last episode of Rebels when she appeared, I could have cried…. But it left me wanting to know so much more- where had she been? What happened to her when she was in the World Between Worlds?