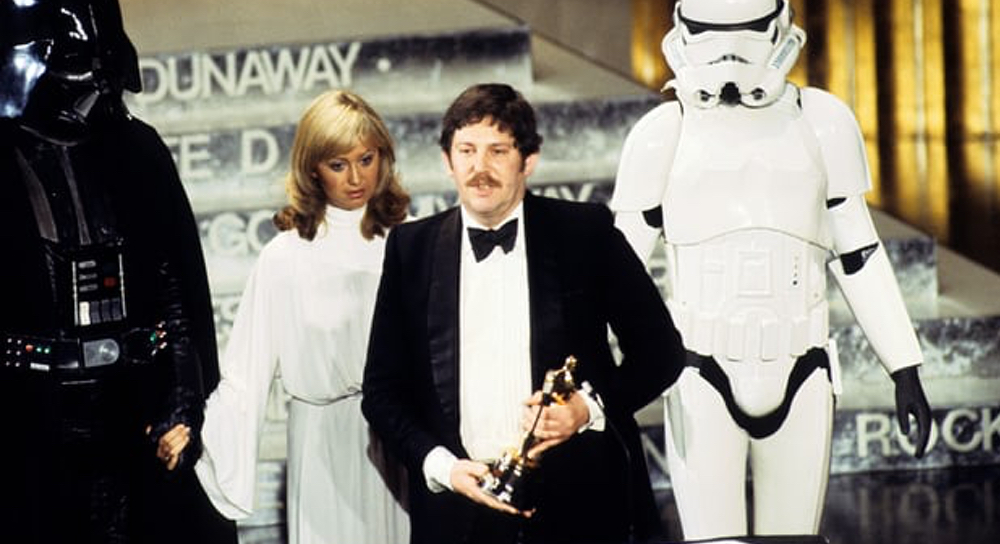 Between 1999 and 2009 Lightsabre.co.uk brought news, fanfic, podcasts and much, much more to the masses. Our one hundred and third guest was an Oscar winning costume designer – John Mollo.

JM – Thank you for inviting me. 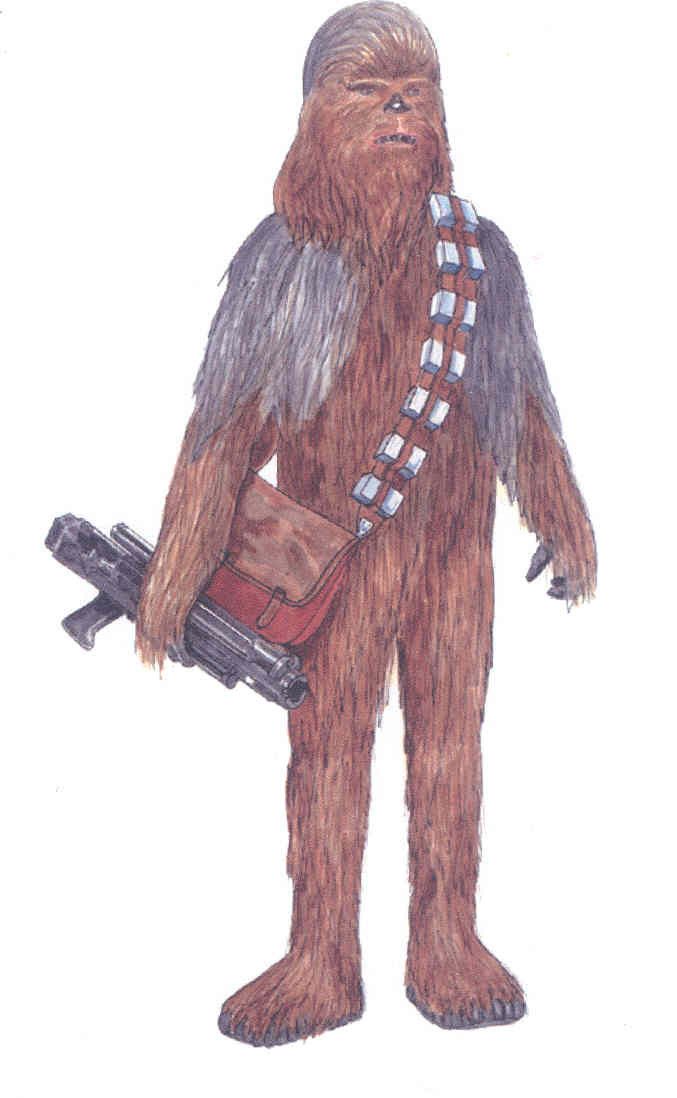 Lightsabre – You’ve had an amazing career going right back to The Charge of the Light Brigade and Nicholas and Alexandra right through to Horatio Hornblower. Was your tour through the industry what you expected, or has it been a different life to what you anticipated?

JM – Pretty much what expected except no two films, and the various problems that arise, are ever quite the same. However the amount of time spent on exotic and not quite so exotic locations did come as something of a surprise.

Lightsabre – Tell us something of your career. How did you break into the industry?

JM – My first film was Tony Richardson’s The Charge of the Light Brigade, on which I was historical adviser and on which I worked for more than two years – those were the days! I got the job through my younger brother Andrew who was an Assistant Director at Woodfall Films and who persuaded Tony that I was just the person he needed to do the research for his film. Apart from location hunting, researching props etc, I was responsible for all the military costumes, most of which we made in Turkey where we shot the Crimean scenes. JM – You have to remember that Star Wars was a one-off at the time it was made. It was all quite new to us and we were working in the dark with not much time, and a relatively low budget. When it came to an end most of us thought the film would never be shown, so its great success came as a real shock.

I have only been going to Star Wars events since 2005 and I am constantly amazed at the huge number of fans who turn up and the extent of the knowledge about the films even the youngest of the up-and-coming generation possess.

Lightsabre – Given that you are relatively new to the convention scene, what do you think of the costumed organisations like the 501st and the UK Garrison? It must be very flattering seeing them and others wearing your designs. JM – I very much enjoyed meeting the Garrison at the National Space Centre in 2007. I have a great admiration for their organisation, their friendliness and the energy they put into their various activities.

Lightsabre – You were honoured not once but twice by the Academy for Star Wars and Gandhi in 1982. How honoured were you to receive the award?

JM – Extremely, of course, but I was particularly pleased because the first three films I worked on – The Charge of the Light Brigade, Nicholas and Alexandra and Barry Lyndon – all received nominations for the costumes, and the last two actually won. In all of them I was responsible for the military costumes, which formed a large part of the wardrobe, but as my credit was ‘Historical Adviser’ I could not share in the awards.

In 1982 I couldn’t attend because I was busy doing fittings for Hugh Hudson’s Greystoke – and anyway, once is enough to go through all that again! 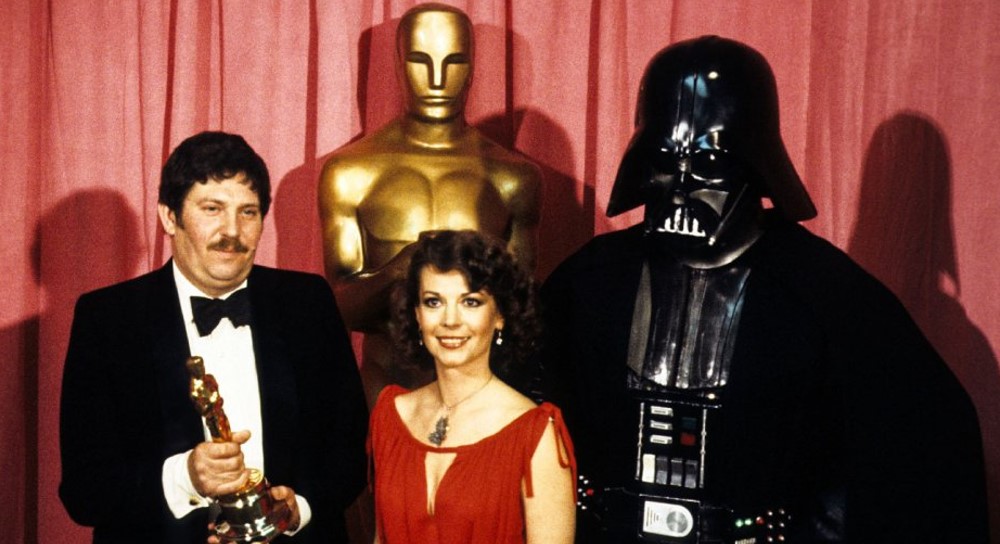 Lightsabre – The 50th Oscar ceremony was certainly the Star Wars Oscars. Who did you rub shoulders with that year?

JM – Strange to say very few celebrities, apart from Natalie Wood, who presented me with my award. There was quite a gang of us from the film and we tended to stick together. Anyway the next day, having gone to bed about four in the morning we were back at work with a production meeting for The Empire Strikes Back!

Lightsabre – Ghandi was such an amazing film, one that really challenged the audience and featured a powerhouse performance from Ben Kingsley. In terms of movie classics, it rates right up there with Star Wars. How did that job come about? 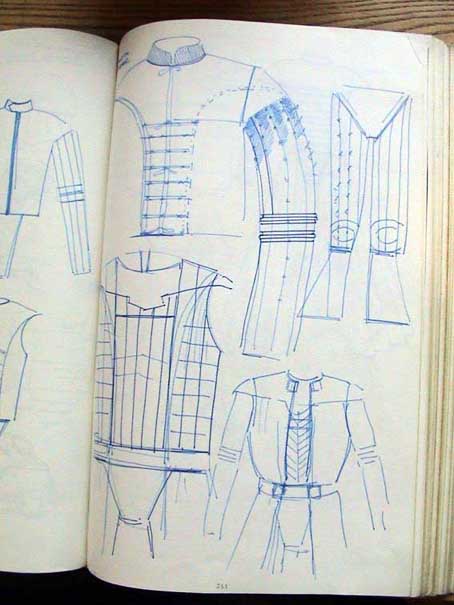 JM – Terry Clegg, who was the production manager on Barry Lyndon came up to me on the set of Outland, which was coming to an end, and asked me if I would be interested in working on Gandhi, as there were several military scenes. Of course I jumped at the opportunity of working with Dickie Attenborough, and of going to India. It was a hard film as the crowds were enormous but it was a great experience. India is a wonderful place for costume designers as you can get virtually anything, however elaborate, made very quickly and cheaply.

Lightsabre – Sitting down with an empty piece of paper and a pencil must be awfully daunting. What sparks your imagination to inspire you in your design?

JM – My art school training was mainly in illustration and over the years I have done drawings for several books. So I tend to approach designing a film in the same way as I would a book. In other words I start off by doing small sketches of scenes from the script and develop my ideas from them.

Then, of course, depending on the subject there is the research, which is the bit I like the best. When I was doing King David I found a book in the London Library called ‘The Art and Culture of the Philistines’, and very useful it was too! JM – I find I am very self-critical when I see my work on the screen. In Star Wars I was quite pleased with the officers, guards, pilots, ground crew etc, both Imperial and rebels, for which we had no input from the States, especially with the Imperial officers. In Empire I thought the Snowtroopers worked pretty well.

Lightsabre – Tell us something of your other interests outside of Star Wars? 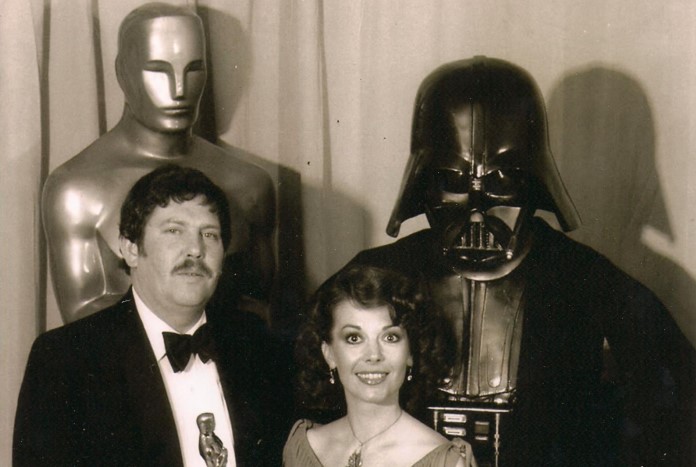 JM – Throughout my career I have had long gaps between films, but I have usually had some sort of research or book or research project on the go. At the moment I am trying to write my memoirs. I have done travel in the far east and other exotic places so now I travel mostly in Europe, which I find far more interesting from the artistic point of view as I paint quite a bit – abstracts, which I find a rest from doing detailed costume drawings.

Lightsabre – You were instrumental in designing two of the most iconic characters in motion picture history, Darth Vader and the Stormtroopers. How do you feel about the impact that Vader has had on popular culture? And the Stormtroopers have spawned a large number of offspring, with Snowtroopers, Biker Scouts, Clone Troopers and the rest. How do you feel about the evolution of those designs and the way that Macquarie’s work and yours have blended into today’s characters? 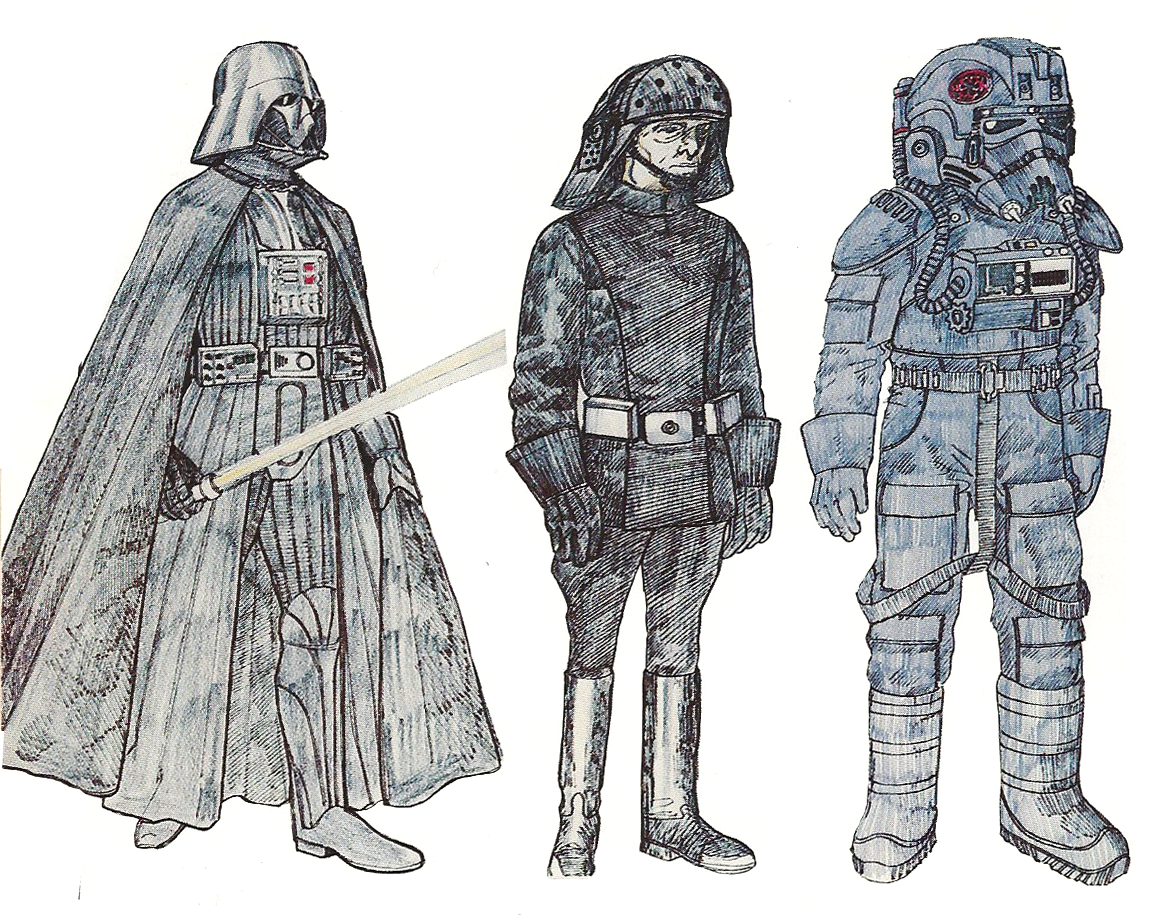 JM – I am not really surprised at Darth Vader’s popularity. Audiences always like a really fearsome villain, and he is certainly that. As far as the others go it seems to me that they are the only ones that carry on the style from the first films. As George Lucas has himself admitted, he deliberately changed his ideas on how the costumes in the new films should look, and they are certainly different.

Generally speaking, in film design, shortages of budget and preparation time concentrate the mind wonderfully. But obviously there were no such constraints the second time around. 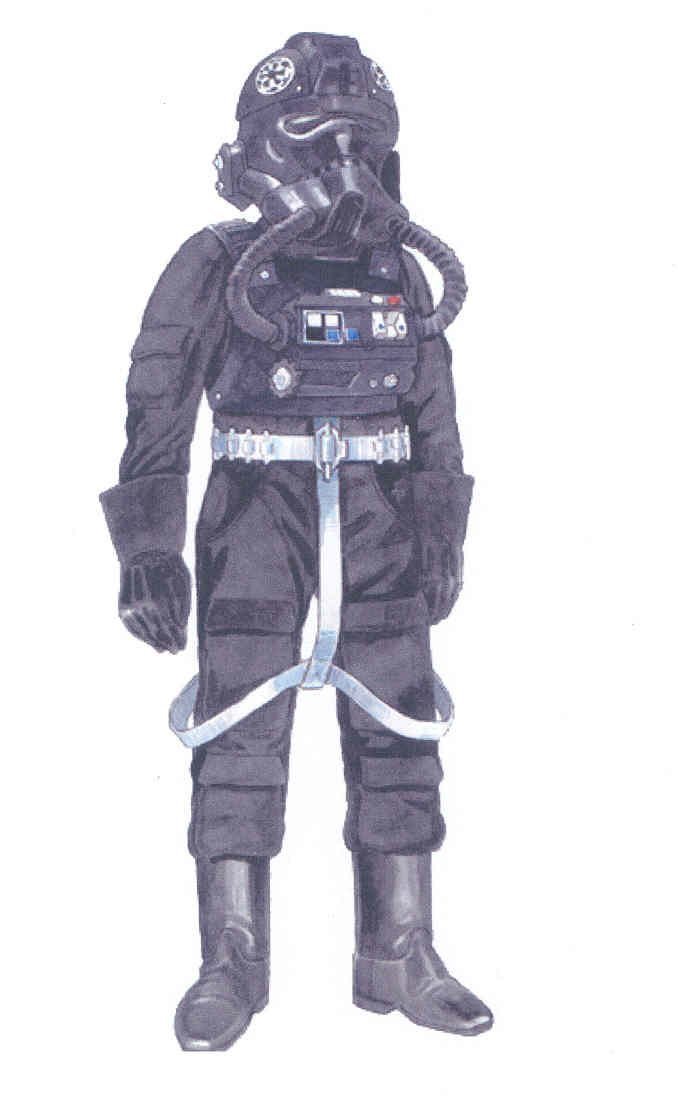 Lightsabre – Your background is military history, which has been evident during your career. Were there any historical projects you wish you had participated in that you missed out on?

JM – Yes, several. The one I most wanted to do was Waterloo, which is really my subject, but I was working on The Charge of the Light Brigade at the time. Dougie Hickox, the director of Zulu Dawn wanted to use me, but unfortunately it was all set up in South Africa with a local costume designer so I ended up going out there for two weeks to see that they were on the right track, and drawing the storyboard for the battle scenes, which was very interesting as I had never done a storyboard before.

While I was working on Hornblower, the Master and Commander lot turned up and picked our brains mercilessly. Not, I felt once I’d seen the final results, to very good effect. How I wish I had worked on that one.

JM – Not a lot at the moment. You never retire in the film industry as long as people ring you up, but there has been rather a dearth of calls recently. Anyway, the prospect of getting up at five in the morning for months on end has rather lost its charm! 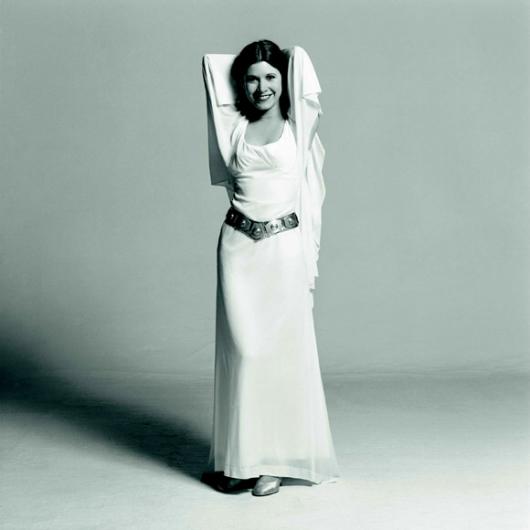 JM – Well designed and very interesting. I particularly like the long list of interviews. One day I must settle down and read them.

Lightsabre – It’s been a great interview, and thanks for being our guest on Lightsabre. Just one final question. George Lucas offers you the chance to design again for the new television series, allowing the bridge between the prequels and the originals be built by the originators of the classic trilogy? Which group of characters would you concentrate your efforts on?

JM – Very much a hypothetical question I think. However, one group that received very little attention the first time round were Luke’s friends and relations. We did shoot one small scene with them, but it was cut. It would have been fun to create a whole lifestyle around this rather neglected part of the story.

Also in the original scripts, particularly for Empire, we met the Emperor and the Sith Lords and I would have loved to have designed some more elaborate clothes for them, but they were cut as well. And anyway, as George himself said, he didn’t want anyone to ‘notice the costumes’!

This interview was originally published on www.lightsabre.co.uk on 6th April 2008.