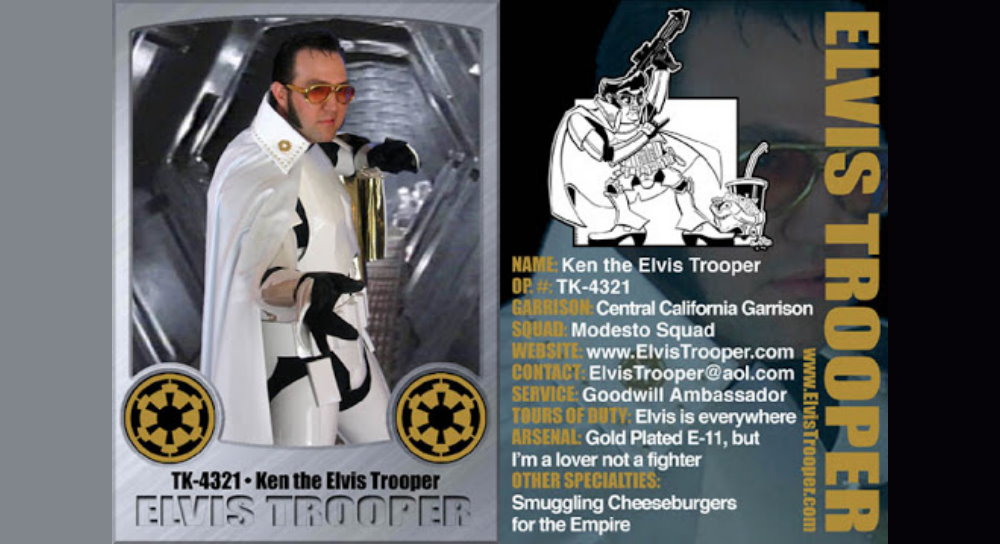 Between 1999 and 2009 Lightsabre.co.uk brought news, fanfic, podcasts and much, much more to the masses. Our one hundred and twenty-eighth guest got All Shook Up for Star Wars – Ken ‘The Elvis Trooper’ Tarleton. 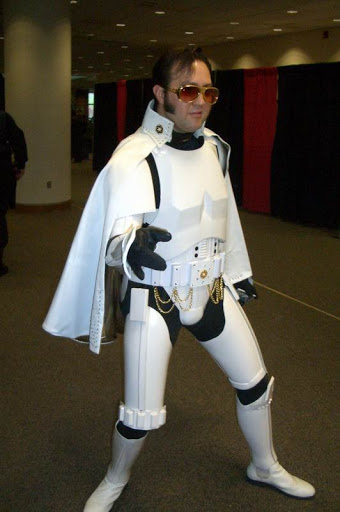 Lightsabre – Ken, welcome to Lightsabre, pleasure to have you here.

KT – That’ a great big Ol’ Thank Ya Very Much for having me.

Lightsabre – You’ve travelled North American conventions for the best part of a decade as the Elvis Trooper, mixing the magic of Star Wars and Elvis and Bringing It Back to the masses. How much of a kick do you get out of being the Elvis Trooper?

KT – A lot of fun and if it wasn’t then I just wouldn’t do it. It great to get out there and over play a character, make a few people smile and even a few laugh, which is great as it is supposed to make you laugh. It’s all about have fun with Star Wars and Elvis too.

Lightsabre – Like the rest of us you Can’t Help Falling In Love with Star Wars, but which one is your favourite movie episode?

KT – Oh baby, I have to go with the first and the original Star Wars, that A New Hope for you young’ins.

Lightsabre – You’ve had Fun In Acapulco, travelled the Mystery Train to Guadalajara, seen a Hawaiian Sunset and said Viva Las Vegas, so you must have met some famous folks in your time. Who’s had the pleasure of an audience with the Elvis Trooper? 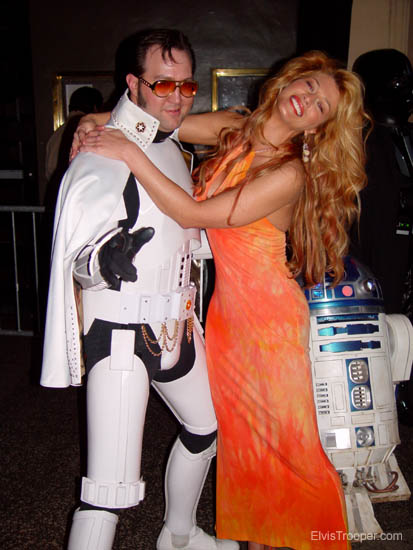 KT – Well now, I will just have to tell you what I have told many before, it does not suck being the Elvis Trooper. As it has opened a lot of doors that would never have been opened if I was just a normal fan, and in turn I have meet many people that I have always wanted to meet. But really when it all come down to it, I just love to keep the company of all the girls in the Slave Leia outfits.

Lightsabre – You’re as much a product of Presley as you are of Lucas, so what do the Elvis fans think of the Elvis Trooper?

KT – Here is something I have come to find out over time, if you think Star Wars fans are diehard then you would be blown away at some of the Elvis fans. But on both sides of the fandom you have the ones that take it way too seriously and the other that embrace I for what it is and know how to have fun with their fandom. So I will just say that I have meet fans on both sides that just don’t get it.

Lightsabre – You’ve been to some amazing conventions, but which one is Always On Your Mind as the most memorable one?

KT – As conventions go, San Diego Comic Con is the largest thing there ever will be, if you have never been you should try to make it at least once. But even with all the stars and industry people you can meet at these large conventions, which have been great over the years, I am now realizing that I have a lot more fun on my personal side at the smaller conventions where I get to see a lot of great friends that I might only see once a year. So smaller cons are a great way to connect with like minded people, cons like Dragon Con in Atlanta each year is a non stop party weekend for me and the only downside to that is leaving. But some of the Star Wars Celebrations have been very memorable for me as fans from all of the world have come to these and those have lead to some great friendships as well. 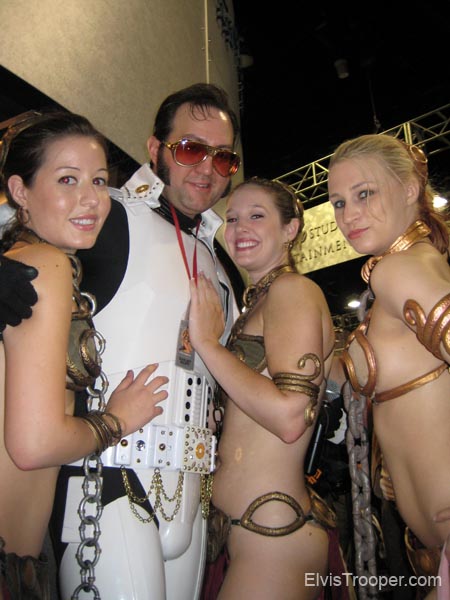 Lightsabre – Your costume is a fantastic mix of 70’s Presley and 70’s trooper. How long did the costume take to make, and was it fun putting it together?

KT – The Elvis Trooper outfit is we see it today has been a gradual progression actually. I started out putting together a pain Stormtrooper and joined the 501st. From that I got the idea to mix Elvis with the trooper, and that is a whole other long story. But the first version of the Elvis Trooper was just me in full trooper gear with the helmet off and wearing Elvis glasses and carrying the helmet around in my hand. The next convention I added the studded pauldron, finally ditched the helmet all together. Later added the cape with I personally detailed the Imperial cog on the back of myself and the last thing I added was the jewelled belt complete with gold chains.

Lightsabre – What’s it like being such a celebrity in the Star Wars convention world? You’re a Flaming Star!

KT – Well, I don’t know about flaming, but hunk’s hunk’a has been used to describe me a few times. But really, all of the Star Wars fans I meet are great. I don’t consider myself of any type of celebrity and don’t have any fans, just fellow Star Wars fans is all I see. But if you want to say I am one of the most well known Stormtrooper or Star Wars fans at conventions that I am very cool with that.

Lightsabre – You troop as Elvis, Solo, Indiana Jones and as a Ghostbuster, but what else would you like to Presleyfy? 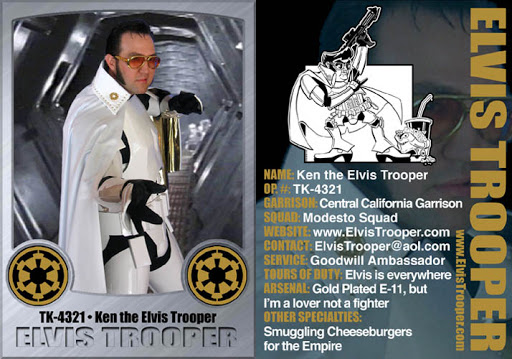 KT – Ah yes, since I started that I have had a huge number of Elvis/pop-culture character that have run through my head. the last one I did was an old one that I have been wanting to do which was my Star Trek red shirt Elvis character. Which made for a good tag line as I would tell people I was headed on an away mission but I am sure nothing bad would happen to me and I would be right back. But really Elvis and any character will work together so I support others trying it out as well.

Lightsabre – A Hundred Years From Now do you think the world will still be celebrating both Star Wars and Elvis?

KT – I’m going to have to say yes on that, both of these just had a 30th anniversary so I would think that 100 would not be out of the question.

Lightsabre – What’s next for the Elvis Trooper? Any chance of a trip to Europe for longer than one day at Prestwick Airport?

KT – Ah, I would love to visit Europe again, came over for a visit about 4 years but that was just to see the sights, no trooper outfit but it was a great place to visit and I would love to come across again for a convention. so if you know anyone who might want to bring me out and sponsor my trip then let me know! 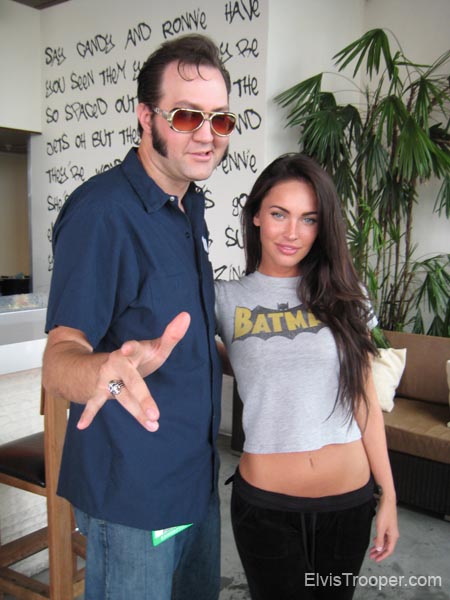 KT – Lightsabre, uhh, I think you spelled it wrong baby. But seriously, those are some great interviews that you have up there, keep up the great work.

Lightsabre – It’s been a great interview, and thanks for being our guest on Lightsabre. Just one final question. Indiana Elvis, Elvis Solo and the Elvis Trooper are waiting in the lobby at Sun Records when Sam Phillips walks in and asks which one of you wants to sing first. The three of you start to Rip It Up about who goes first, so which one is it and why?

KT – Oh baby, let’s see what we got here. Well everyone knows that the ElvisTrooper is a lover not a fighter but he might break out a little Kay-rah-tay if need be. And Indiana Elvis has a great bull whip to use if the argument starts going south. And then you have Elvis Solo who would just as soon shoot out your TV and ask question later. But just as soon as someone mentioned taking a break to eat then they would probably forget all about what they were doing there in the first place. So maybe they all win if there is enough food to go around. Thankyavermuch!

This interview was originally posted on www.lightsabre.co.uk on 30th November 2008.