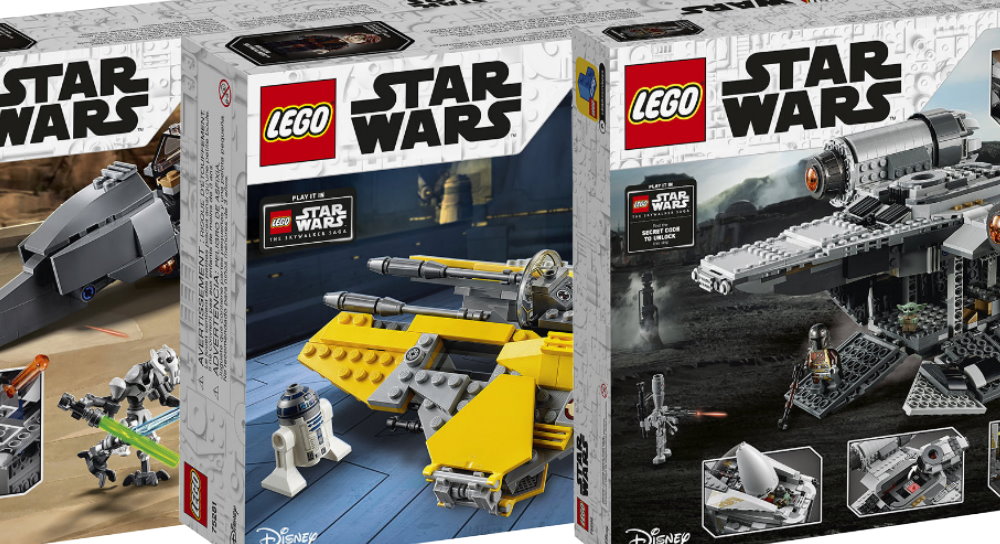 Anticipation is high for the forthcoming LEGO Star Wars Skywalker Saga video game, and StarWars.com bring us a look at the LEGO sets that will accompany the game. An annual tradition, this year’s LEGO Star Wars Advent Calendar will pack six minifigures such as Darth Vader with Christmas sweater decoration and D-O with a festive hat, plus a foldout playmat with an image of the Millennium Falcon with Christmas lights to inspire creative play. The 12 mini builds include Anakin’s Podracer, a Republic Cruiser and Darth Vader’s Castle.

Long requested by fans, this set celebrates the elite soldiers of the Republic – the 501st Legion. It includes three 501st Clone Troopers and a 501st Jet Trooper, plus two Battle Droid LEGO action figures, as well as the 285-piece AT-RT Walker and BARC Speeder.

This set includes minifigures of Anakin Skywalker and R2-D2, and Anakin’s iconic fighter as a 248-piece build. The fighter features an opening LEGO minifigure cockpit, spring-loaded shooters, foldable wing flaps with space for R2-D2, and clips for spare ammo and Anakin’s Lightsaber.

Another set perfect for fans of Star Wars: The Clone Wars, this release includes two minifigures (Ahsoka Tano and Ahsoka Tano’s Clone Trooper) as well as AAT Driver Battle Droid and Battle Droid LEGO figures. The AAT consists of 286 pieces and includes opening hatches with space inside for the Battle Droids, LEGO minifigures, 2 spring-loaded shooters, and a rotating turret with an elevating cannon.

Inspired by Star Wars: The Rise of Skywalker, this set includes minifigures of Rey and two Knights of Ren, and the villainous group’s ship. The Knights of Ren Transport Ship is a 595-piece build and features hidden “skis” to replicate the hover effect, plus two opening cockpits for the Knights of Ren, a compartment for a captured LEGO minifigure, and two spring-loaded shooters to inspire creative play.

Created for Star Wars: Galaxy’s Edge, the Star Wars-themed land at Disney Parks, the Resistance I-TS Transport comes home! A fun and challenging 932-piece build, the top of the shuttle lifts off and the sides open for easy play, and there are four rotating stud shooters by the cockpit and four rear stud shooters for battle action. Includes four characters — Lieutenant Bek and Vi Moradi, plus Astromech Droid and GNK Power Droid LEGO figures — to role-play galactic adventures.

The Mandalorian’s fan-favorite armored transport shuttle comes to life in LEGO form. This 1,023-piece vehicle features a cargo hold with opening sides that double as access ramps and carbonite bounty elements inside, a dual LEGO minifigure cockpit, spring-loaded shooters, escape pod and more authentic details from the series. The release includes an all-star lineup of characters, including The Mandalorian, Greef Karga, and Scout Trooper minifigures, plus the Child and IG-11 LEGO figures.

LEGO Art Star Wars The Sith: Build the dark side

UCS Republic Gunship: “We are knee deep in development now.”

LEGO Star Wars PSA: An Important Message from a Galaxy At Least Six Feet Away