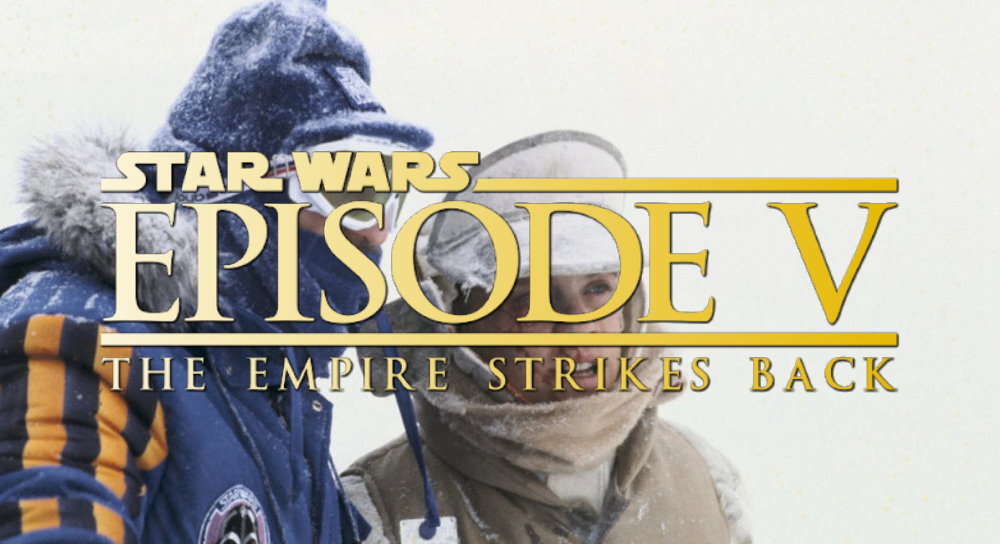 For some reason there has always been a name omitted from official publications regarding the production side of the events relating to Hoth, or more specific the filming of the scenes in Norway. This name is Bjørn Jacobsen, who was a Publicity Manager for 20th Century Fox Norway at that time. Due to this position he was one of those who saw a screening of Star Wars that was held in Paris in 1977. The day after he and Gary Kurtz (producer of A New Hope and The Empire Strikes Back) had a walk down Paris’ main avenue Champs-Élysées. They got to talking about the sequel and Kurtz, knowing that they wanted a snow planet in the sequel, asked Jacobsen: “You are from Norway right? Do you have snow and ice there that are suitable to use for filming?” While that question was answered with a yes, it would take a few more months before they returned to this subject. 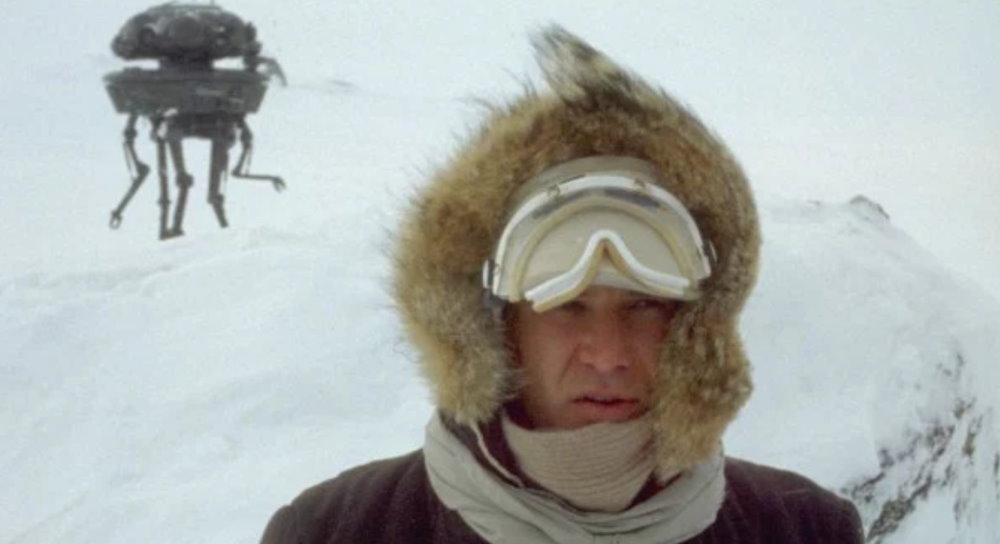 With the movies not premiering until mid-December in the Scandinavian countries (16th December for Finland and Sweden, 26th December for Denmark and Norway), it was not until the fall of that year that the Scandinavian press got their press junket. Besides Kurtz, Mark Hamill and Carrie Fisher were there to promote the movie and afterwards they had dinner with Jacobsen. Kurtz returned to the subject and asked Jacobsen to write down the places where he thought that they could shoot for this snow planet. Jacobsen wrote down: Hardangerjökulen, Finse. Just before Christmas 1977, Jacobsen received a phone call, if he could arrange a recon trip for John Barry (production designer) and Robert Watts (production manager on A New Hope, an associate producer on The Empire Strikes Back). Now, it is possible that Bruce Sharman (Production manager/supervisor) also was with them, as Bjørn Jacobsen recalls him there, but no making offs mentions Sharman being there on this trip. On a sunny day they took the trip to and on the Hardangerjökulen glacier and made many photos. These pictures convinced Gary Kurtz to come over himself, joined by Robert Watts and Norman Reynolds (production designer). After this trip it was decided that Finse, Norway, would be used for filming scenes of Hoth. The production took place in March, 1979, during the worst snow storm that the country had seen in a hundred years. This was a far cry from the sunny days on which the recon trips had taken place. 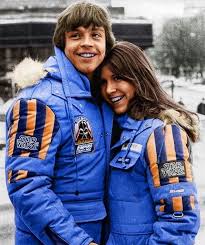 Jacobsen, now appointed as the liaison between Lucasfilm and Fox, became drafted to manage all the needs for the production while they were in Norway. This included practical things like readying the location, making sure that everything that was needed was there, but also other more fun stuff like taking care of the actors. This included arranging photo ops in Oslo for the press, in which he took a sleigh ride with Hamill and Fisher. Talking about Fisher, in the days before they had to go to Finse, she was interested in hat shopping and antique visits in Oslo. Fisher had her eyes set on an antique cabinet at Blomquist, but to her dismay the store could not export the cabinet from Norway. They also visited the museums at Bygdøy.

And then there is the famous story of how Harrison Ford was called to come to Finse while the snow storm was raging on. Gary Kurtz and Irvin Kershner had decided that while they cannot film the stuff they wanted to film, they could use their time to film the stuff of Han Solo in actual snow, rather than do it later in Elstree Studios as was planned. However, probably due to the amount of time that has passed since then, retellings of this story became exaggerated and omissions took place. The whole story is a bit longer and involved Bjørn Jacobsen. 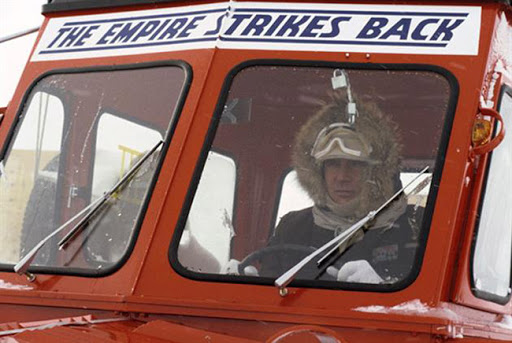 As he had done with the other actors, Jacobsen picked up Harrison Ford at Fornebu (Oslo’s airport). They then went around in Oslo for a few hours before Ford would have to take the train to Finse. Ford got hungry and wanted hamburgers. But at that time there were no hamburgers in Oslo, so they ended up with a chop sandwich at a cafe on the Eastern Railway, before placing him on the train with his ticket in hand. However due to the severe storm the train had to stop and Ford had to get off at Geilo station. It then took 2 taxi rides to get to Ustaoset, and from there the famous snow plow ride happened. The snowplow was driven by location manager Philip Kohler, who also brought a bottle of Jack Daniels for the cold and tired actor. Ford was dressed only in jeans and a thin tweed jacket that turned out to be unsuitable for this kind of weather. This midnight adventure meant the actor had just a few hours of sleep before he had to film his scenes early the next morning. Ford would later laugh about this all.

When the main actors and people like Kershner and Kurtz left, the second unit stayed behind to film shots that were impossible to film earlier due to the bad weather and shots to be used as plates by ILM. Jacobsen stayed behind and managed that too before going to Elstree and watch everything else being filmed there. 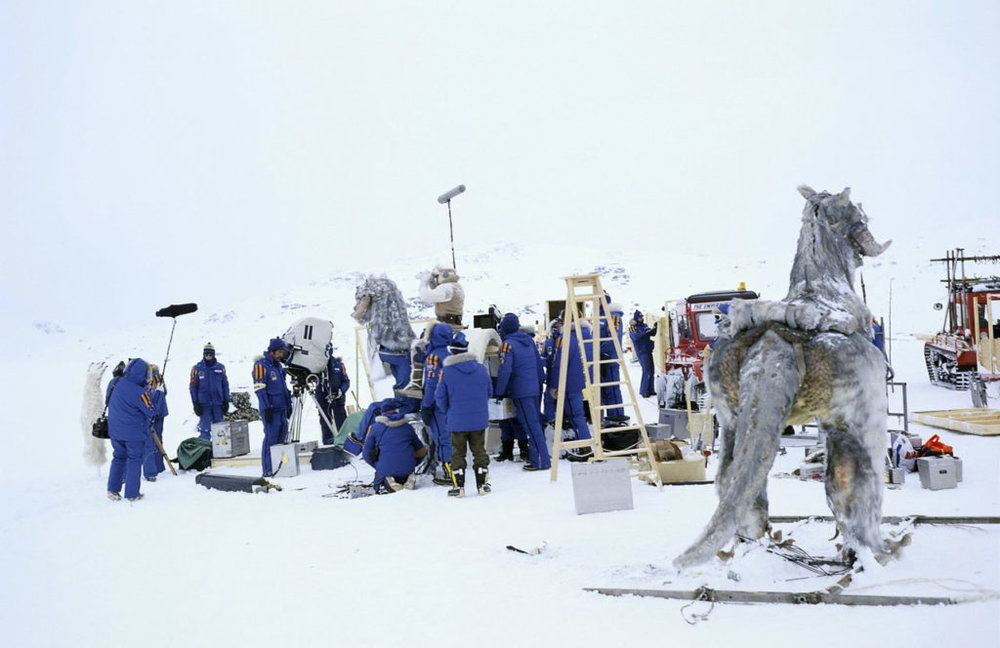 Another responsibility for Jacobsen was to hire the extras to be used as Rebel soldiers. Red Cross volunteers were used to portray the soldiers, but among them were a couple of journalists who thought they were able to get inside scoops and secrets by posing as extras. Arve Juritzen and Odd Johan Nelvik worked for Se og Hør (a TV guide and celebrity journalism magazine published in Scandinavia) and both had signed up as volunteers for the Red Cross of the city Drammen. However while the set was a closed one, press were welcomed and invited from time to time by Bjørn Jacobsen. While some accepted, some had no interest whatsoever. Besides, in a time pre-dating the internet with its spoilers, it did not matter much that two of the extras were journalists in disguise, something that Jacobsen realized right from the start with Nelvik and Juritzen making photos in the Hoth battle trench while on filming breaks. Another good example of the contradicting security measures was that production made no effort to hide the huge props like the turrets, along with the snowtracks with the still unrevealed title of the movie, placing them right next to the train track for every tourist passing by the by train to see! Yet on the other hand there was an incident where British journalists came by helicopter across the set to take pictures and had to be chased away by the production team’s helicopter. Nelvik and Juritzen indeed ended up as extras in the movie and published a fair share of articles for their magazine. Nelvik can be seen in the trench, but Juritzen however cannot be seen in the final movie edit. A funny story that Juritzen recalls from his time was that he was somewhat impressed that the production carried hot burgers by helicopter up the field every day.

Among those involved in the Norwegian part of the recording were Elin Erichsen, Ola Solum and the duo Dag Alveberg and Petter Borgli. The latter two later started Film Effect and were responsible for one of the first popular Norwegian suspense films, “Orion’s belt”. Research could however not reveal exactly what these people did, but it appears to have been behind the scenes work.

Other locals that have participated as a Hoth rebel trooper were:

Tom Egeland: Barely seen in the movie, but he became the news editor for one of Norway’s biggest TV channels as well as a recognized crime writer.

Join us next time for a look at the bounty hunters and how they were brought to life!

Disclaimer: While most of this article was based on Bjørn Jacobsen’s stories that he told during a presentation in 2010 during a Finse, Norway journey I undertook with the 501st Nordic Garrison, a big thank you must go to this original (Nordic) source for some extra information:

The matte paintings of The Empire Strikes Back

From A Certain Point of View: The Best Scene from The Empire Strikes Back

Galaxy of Adventures: The Battle of Hoth

The Empire Strikes Back time capsule

The Kurtz Joiner Archive remember The Empire Strikes Back

StarWars.com: Why we love The Empire Strikes Back