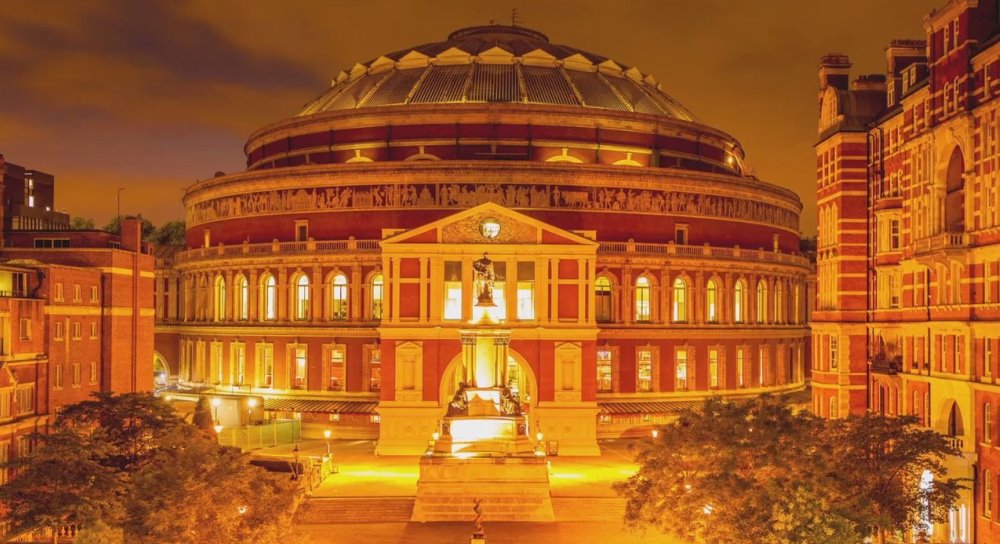 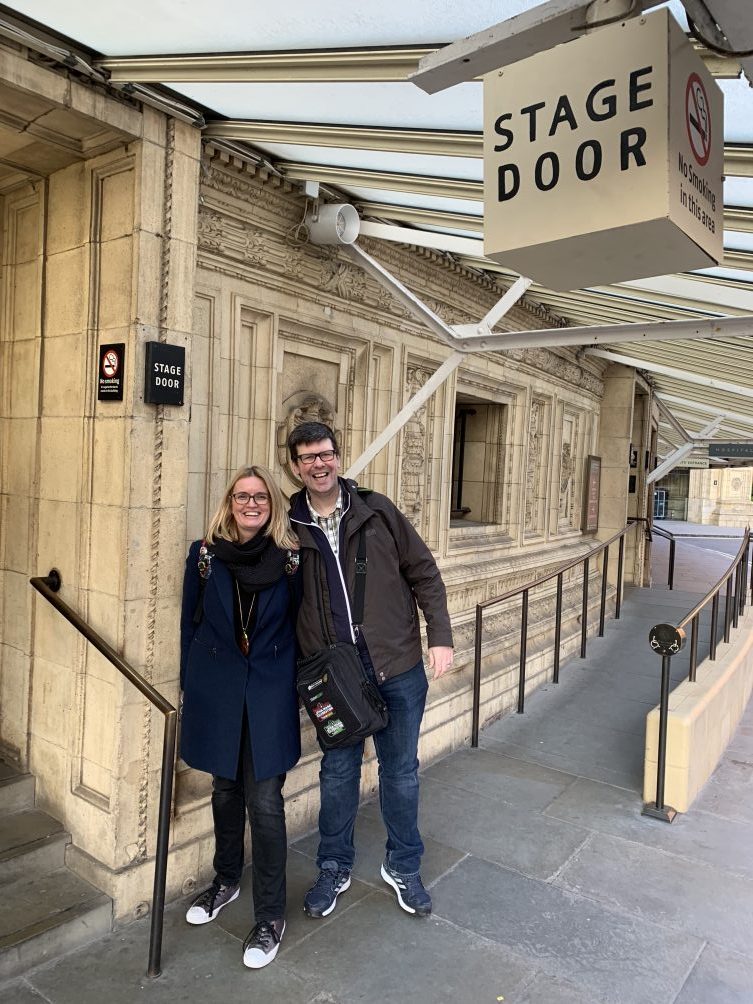 Ever wondered what goes on behind the scenes at a large scale production at The Royal Albert Hall? Well, three of the Fantha Tracks team got the opportunity to do just that at Star Wars In Concert-A New Hope on Saturday 17th December during the Matinee performance.

The Fantha Trackers met at the stage door of the RAH all very excited to see what lay ahead. Once we had checked in at security and our wristbands were secured, we met our  guide Christie, who from the offset was passionate about the hall and it’s rich history of entertainment. 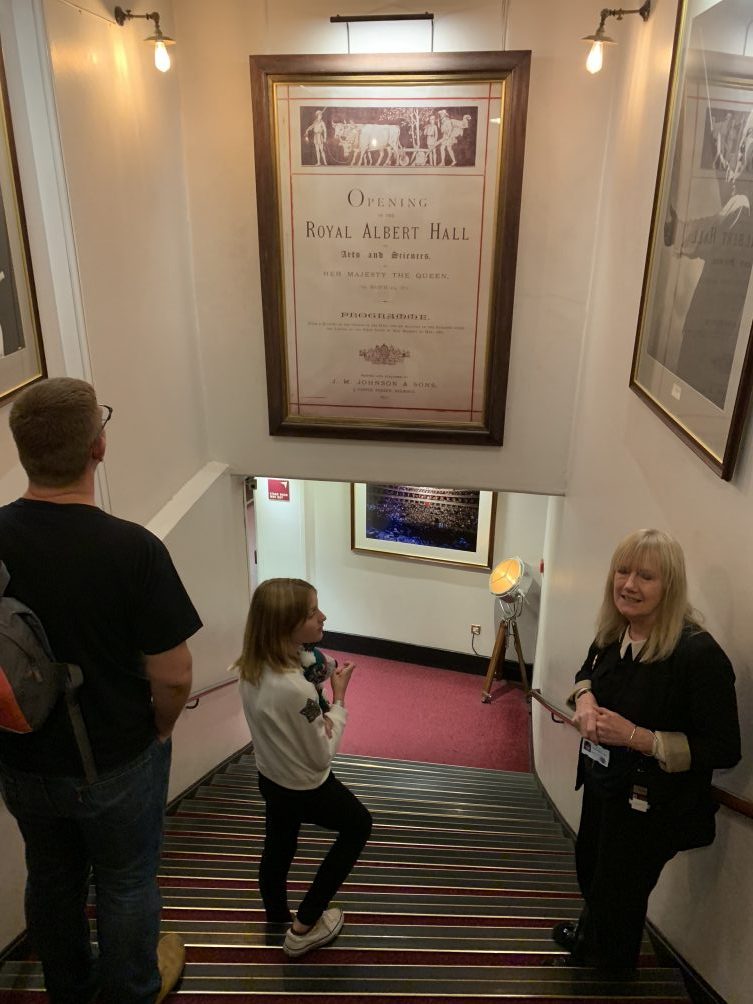 We descended down the stairs to the backstage and our first view was of a poster of the Grand Opening of the Hall in 1871 by Her Majesty Queen Victoria. We went down into the corridor where we were met by the sounds of the Battle of Yavin playing in the background!

We then went into the Artists bar where some of the greatest entertainers have rested during their performances or maybe had a rousing after party! We sat in the area where the greats included Frank Sinatra, Muhammed Ali and more recently Kylie Minogue, Adele, Ed Sheeran but to name a few had once sat. 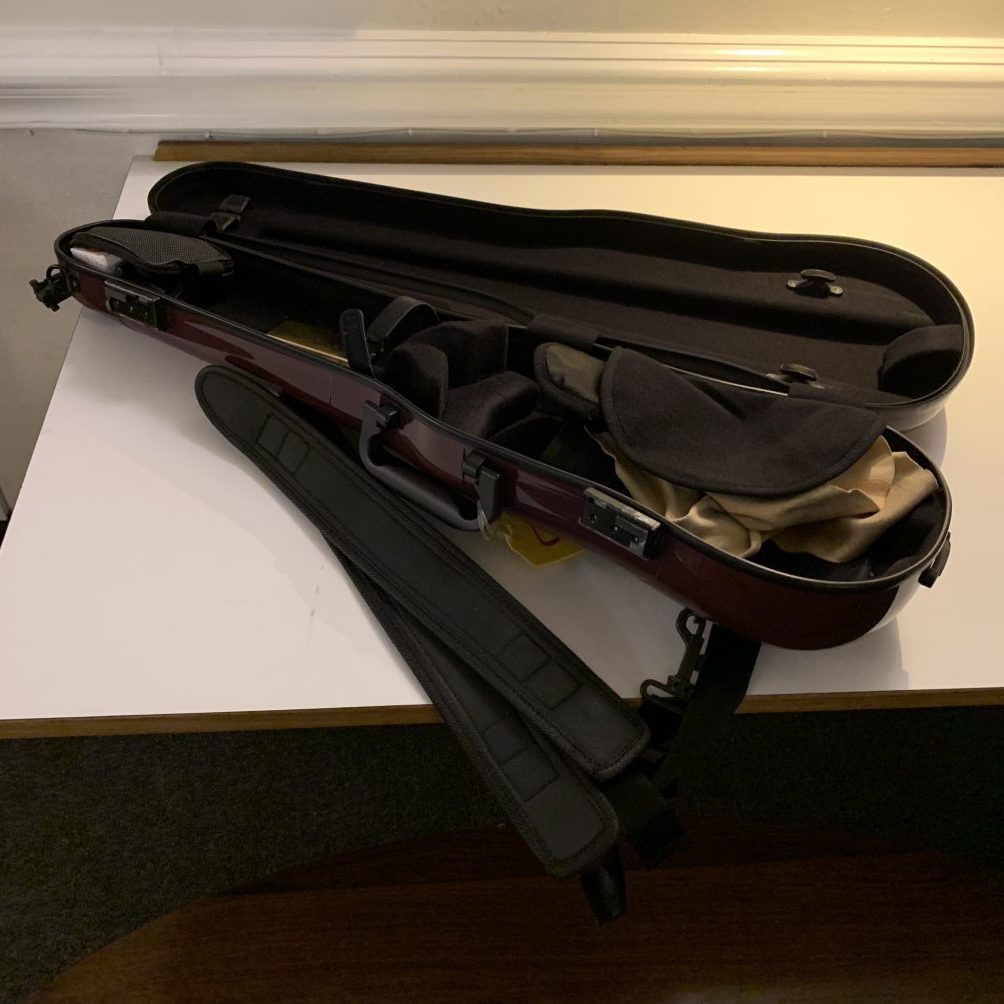 We were very lucky to meet George, the production manager for A New Hope In Concert, he has also helped bring to stage similar productions including E.T, Star Trek and Breakfast At Tiffany’s. He explained to us the complicated process that happens before a concert such as this can into production.

Firstly the hunt for original music scores, seeking permission and then finding the right orchestra and conductor to perform! Followed by the film being stripped back to 3 components the film, dialogue, special effects, allowing the musical score to be played over the top by the orchestra led by the conductor who is watching a screen on the podium that travels allowing him to conduct the orchestra who read their music as normal.

In spaces all over the backstage the London Symphony Orchestra stored their musical instrument cases. We identified many musical instruments including Cellos, French horns and violins. We could also see the daily schedules for the show and the timings which were minute precise! 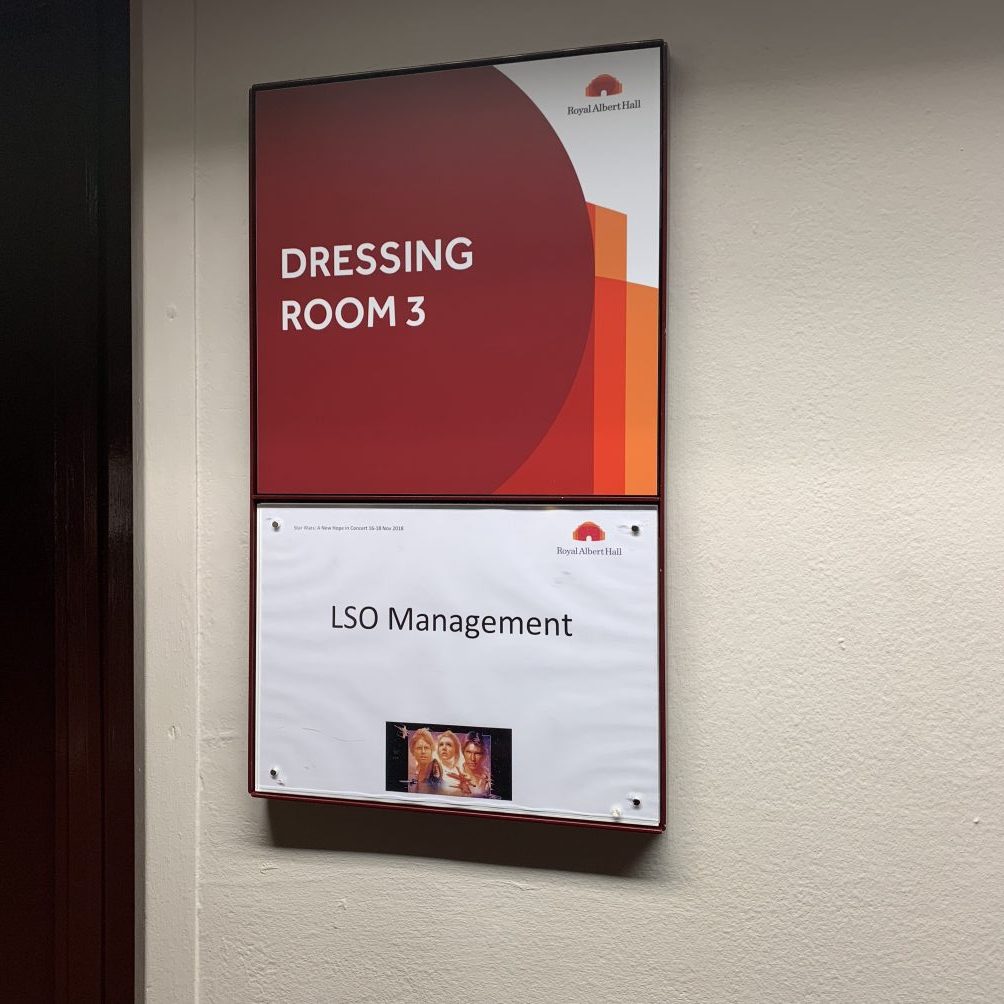 As we moved down the corridor to the other door that led to the Stage we saw the production team busy at their screens watching the film and speaking into their microphones to coordinate events. Lining the walls backstage we got time to see original posters and photos displayed from artists who had performed including Bob Dylan and The Beatles.

It was then off via the changing rooms down to the loading and docking bay which is having a makeover, a local artist is currently painting the walls with iconic silhouettes of people who have performed, this time we spotted Winston Churchill and Supermodel Naomi Campbell. We were informed by Christie, the docking bay is also it’s on venue having held a silent disco there as well as other small gigs. The bay was fascinating to see, Christie explained that as soon as one performance is out the next one moves in.

The fact that The Royal Albert Hall is a listed building and is trying to keep up with modern life, the easiest way to expand the venue size is to build down rather than upwards. There are many floors which in time will be open as part of the venue. 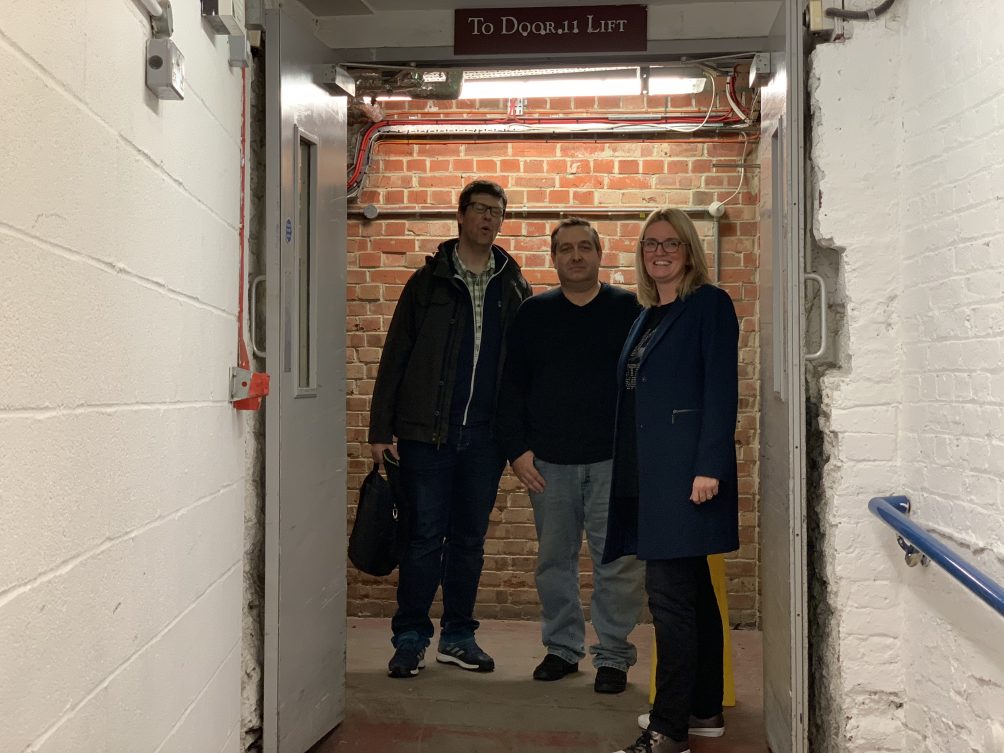 We then headed off to under the stage itself through the huge double doors and Christie pulled the doors open to the opening of the Throne Room music. We all gave a geeky silent giggle and cheer as we had to be quiet due to our position right under the orchestra! It was a magical moment.

The tour proceeded up to the top gallery of the auditorium via a lift once used by Her majesty the Queen, by now the performance had finished and the musicians were on a break before the next performance! The doors of the lift opened and the view was truly breathtaking of the ceiling and auditorium! We walked in, the general public had gone and it was just the backstage team preparing for the evening show. 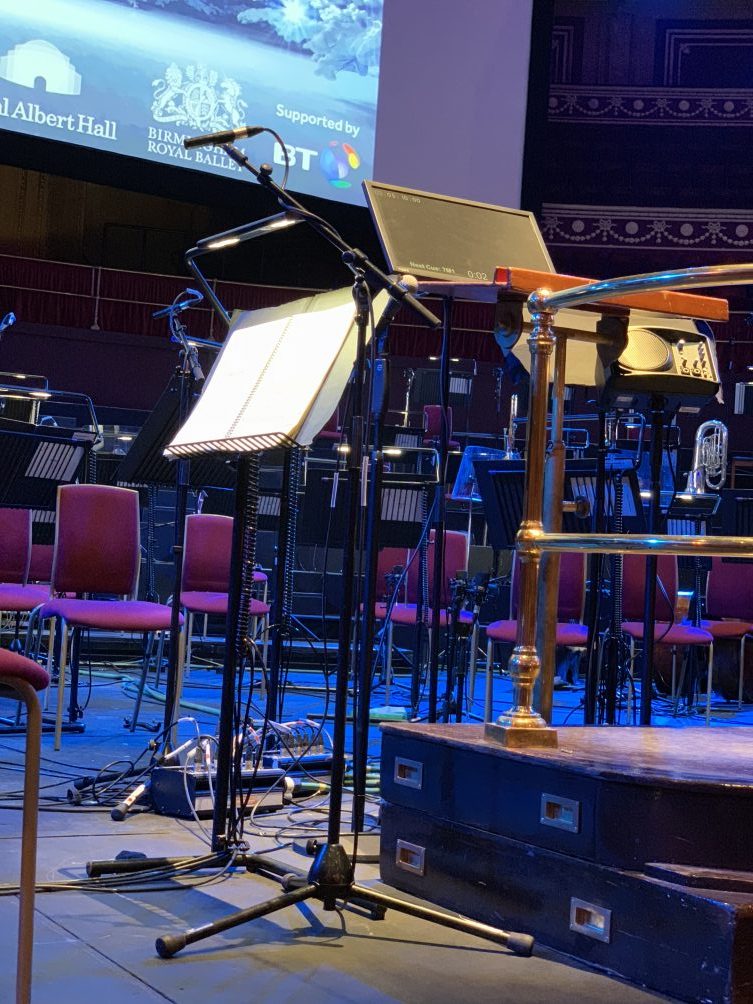 Christie explained how the Royal Albert Hall came to be and how it is currently funded including its rent of one shilling a year for the next 880 years! We then headed down the stairs to the Royal entrance where we got a peep inside the Royal Waiting room, Royal box and staircase. Due to security, we cannot show you this however they definitely are the BEST seats in the house.

Our tour carried on with a view from another private box beside the Royal Box and what a view it was. Christie was a fantastic and passionate guide who had even completed some Star Wars homework of her own, giving us facts about Star Wars actors who had performed in the hall over the years. The tour was fantastic, my daughter who came with us loved every minute of it and Christie answered all her questions as well as ours. 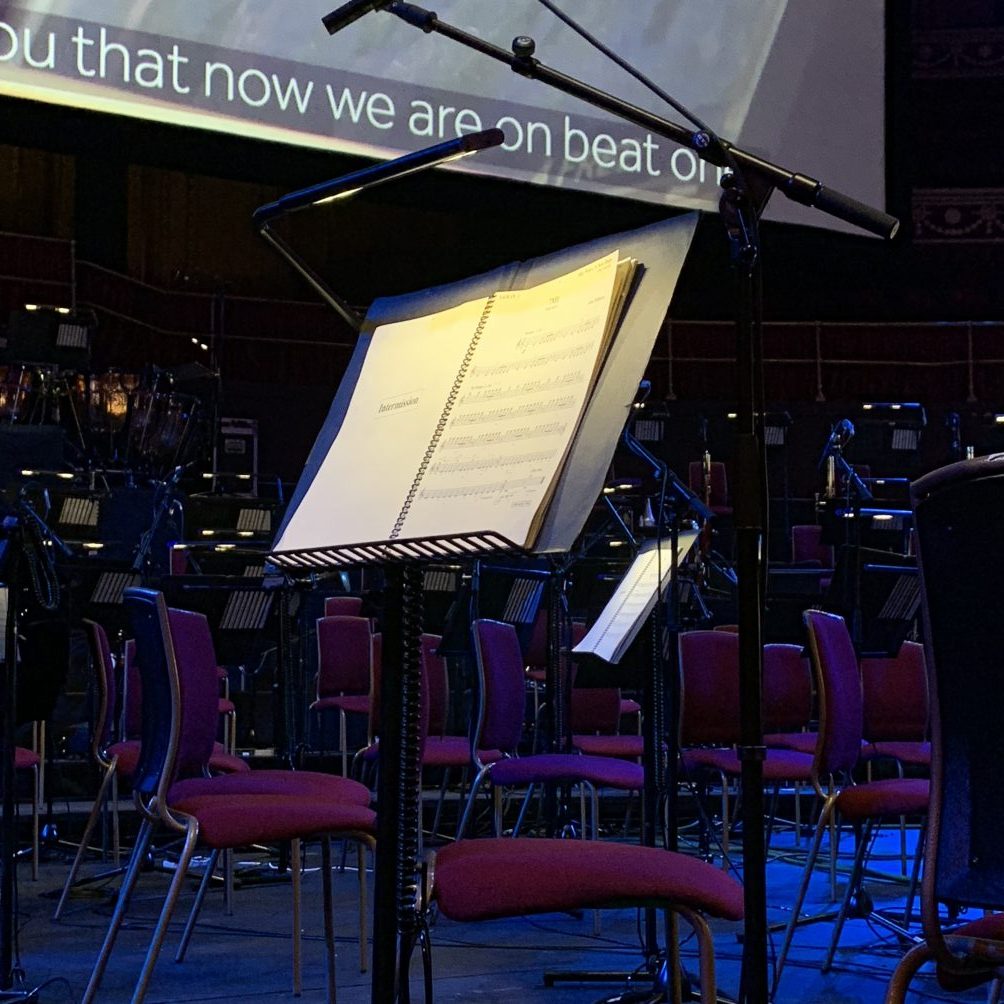 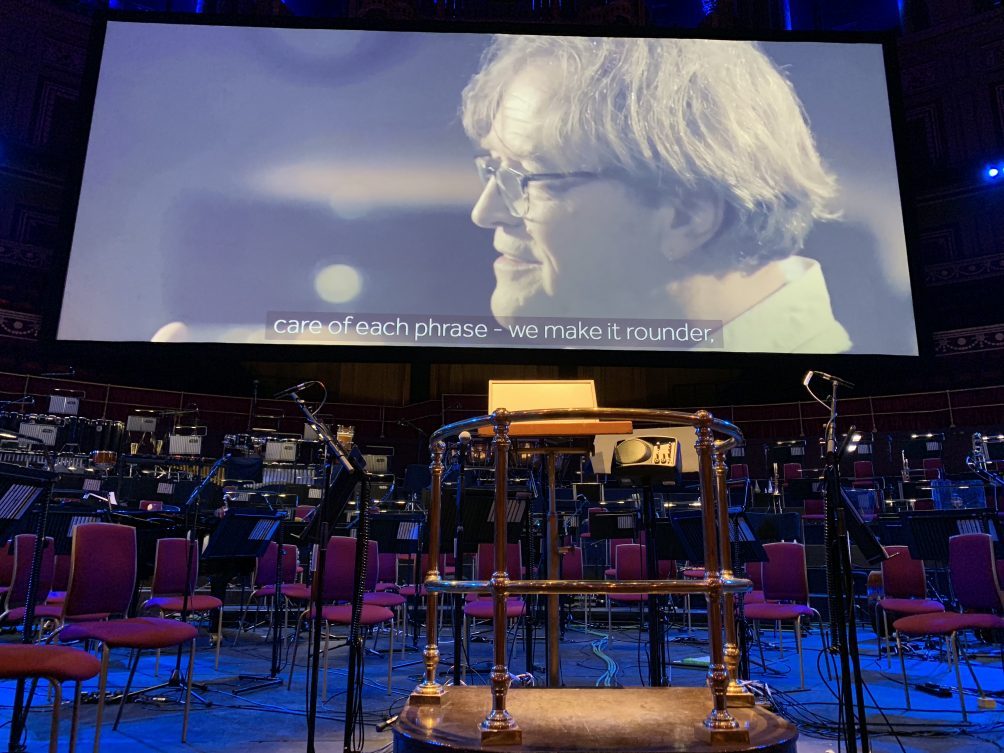 The tour concluded with a trip to the merchandise shop, which we of course spent our money wisely on Royal Albert Hall exclusives. We then said our goodbyes to Christie who was an excellent guide!

The Royal Albert Hall now offer Behind The Scenes tours similar to ours;

Go behind the curtain of this much-loved Grade I listed building and see parts of the Hall usually off limits to the public. This includes taking you under the stage, into one of our dressing rooms where all the stars have prepared to perform, and also into the loading bay deep underground.

Ticket prices for 2019 Behind the Scenes tour bookings are for up to 14 people. Bigger groups need to complete this enquiry form.

Dates are available now to book subject to availability. You can still book for 2018  but spaces are limited.

We at thoroughly enjoyed the tour and would recommend it to anyone who loves to know what goes on behind a production at the Royal Albert Hall. A huge thank you to the team for allowing us to experience the tour. 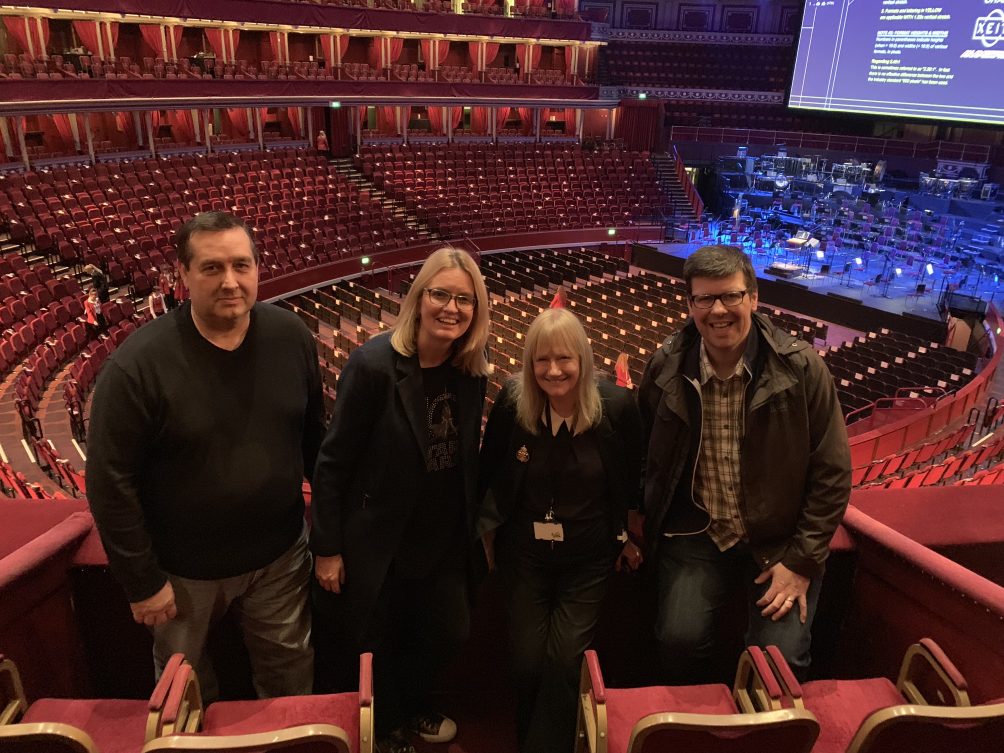 StarWars.com: 7 Behind The Scenes Insights of the Star Wars Film Concert series

Extra tickets available for A New Hope: In Concert