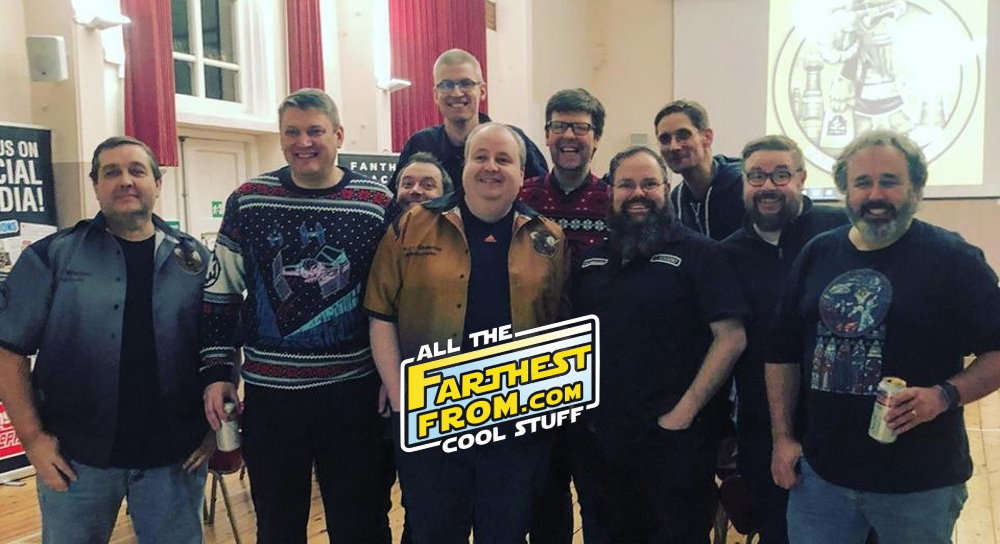 The weekend of 8th and 9th December the latest edition of the highly regarded Farthest From Retro Toy show and Fantha Day, in association with the team here at Fantha Tracks

The show sees fans and collectors from all over the world come together in Fordingbridge, on the edge of the New Forest in Hampshire, for two days of fun, shopping and some fantastic guests. It’s no wonder the show is top of many people’s ‘go to’ list.

Let’s hand over to some of our team who were present for the show to give their thoughts on the weekend.

This was my first time at the show, and sadly I could only make the Saturday due to other commitments. The Saturday of this show is more of a Family Fun day, with a couple of trade stalls and a wealth of activities for fans of all ages.

There were the now infamous Fantha Tracks carnival games, including the Death Star Revenge coconut shy, the Kessel Run buzzer challenge, Carkoon Capers Bantha challenge where your chosen creature has to avoid falling into the Sarlacc, and making its debut  at the show, Play Your Sabacc Right – a Star Wars twist on the popular UK game show. By undertaking these challenges you earn points which can then be traded for prizes, thankfully overseen by someone far more generous than Unkar Plutt.

Also in attendance for the day were ‘Lego Ideas’ artist and model maker Rhys Knight, actor Ross Sambridge who provided the body for Supreme Leader Snoke (thankfully both halves of Ross were able to attend!!) and also a Wookiee in Solo: A Star Wars Story, and collector extraordinaire Gus Lopez, author and creator of the Star Wars Collectors Archive.

Ross is a real inspiration, showing you great ways to create Star Wars Lego models from regular pieces, great if your budget doesn’t run to the ‘official’ kits, but also challenging your building skills to be creative with what you have. Ross is a relative newcomer to the convention circuit, so a bit of an exclusive for the show – a really lovely guy who was happy to share his stories of being on set in both The Last Jedi and Solo, and all delivered with a dry wit that would crack even a First Order trooper’s face.

Again a real coup for the show was the appearance of US-based collecting guru Gus Lopez, whose stories of collecting and knowledge are among the best in the world. And the fact the he rates this show as one of his favourites speaks volumes.

There were also several ‘retro’ games consoles set up for you to try your hand at some vintage Star Wars games – and get odd looks from kids more used to their PS4 or Xbox graphics.

If your padawan is interested in Star Wars, or you want a fun way to get them interested in the franchise I’d really recommend this show for you – this event is every bit as much fun as SWFFD in Burnley or Return of the Garrison in Leicester, with LOADS of activities to keep them engaged and all at a wallet-friendly price.

It’s no secret that I am a huge fan of Farthest From. Since the first shows in 2012 I’ve travelled 3 hours (a mere jaunt to the corner of the road compared to Richard Hutchinson and Gus Lopez I know) down to Fordingbridge in the New Forest for what is one of the absolute best weekends of the year. I wrote about a couple of the early shows on StarWars.com (here and here) and in the intervening 6 years I’ve only missed 2 of the shows (the 4th and 14th, so expect me to me MIA for Farthest From 24 in summer 2020). 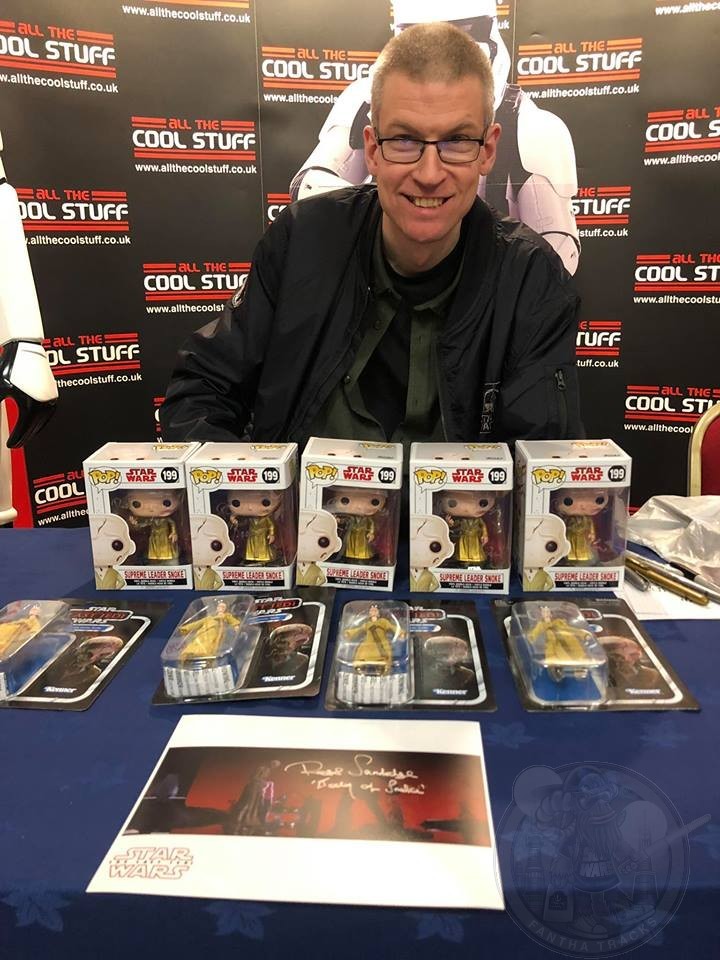 While every show is great fun, for me the winter show is my personal favourite. Not only is Christmas on the way, but these days we also have our own show on the Saturday – Fantha Day. This event was the 4th running of Fantha Day (which replaced the previous Star Wars Fan Day) and once again it was a great laugh, with our special guest Ross Sambridge chatting with fans all day, signing photos and posing for selfies, and our transatlantic guest Gus Lopez talking to fellow collectors. We run games, make sure the kids get the odd extra free go to ensure they’re all winners, I usually find a sweet spot to grab some wifi and throw stuff on the site (aka my happy place) and we generally have a good laugh.

The evening is set aside for the meal, and this year we were munching down on turkey and cranberry pie and lots of sprouts! Great food, excellent service and a few drinks and then on to the interview, where I was lucky enough to chat with Ross about his time on The Last Jedi where he was the body of Supreme Leader Snoke and a wookiee in Solo: A Star Wars Story. Then we were treated to a fascinating talk and Q&A with Gus Lopez, talking about his fandom and collecting habits. That talk is available on the latest episode of Making Tracks, with my interview with Ross coming on the next episode.

Sunday was the main event, Farthest From 19 and I have to say, while there have been busier events in terms of footfall, I can’t remember having such a good time. It was steady all day, the items on show were top-notch (as ever I spent way too much and got a great bunch of goodies) and the conversation flowed easily. The only regret – I managed to catch manthrax from someone and spent the next 8 days feeling as rough as a reeks elbow.

Here’s to many more shows, and hats off as always to my Making Tracks co-host Dave Tree who steadfastly refuses to accept any credit for the stellar work he does for the UK collecting community in terms of information and events. He’s an absolute diamond and we’re lucky to have him.

I’ve lost count as to how many of these shows I’ve been to now but it’s well into double figures and making a 6 hour drive one way each time is certainly worth it.  The Saturday night was superb as we listened to Mark interviewing Ross Sambridge and then uber Star Wars collector Gus Lopez discussing his collecting journey and ethics.  We had a great chat in the morning over breakfast too with fellow vintage collector Andy Norton.

However, Farthest From for me is all about the Sunday event and once again it was fantastic mixing with so many friends old and new as we browsed the staggering range of vintage items on display.  I had no intention on buying some of the items I did but the prices were so good that I couldn’t miss the opportunity. 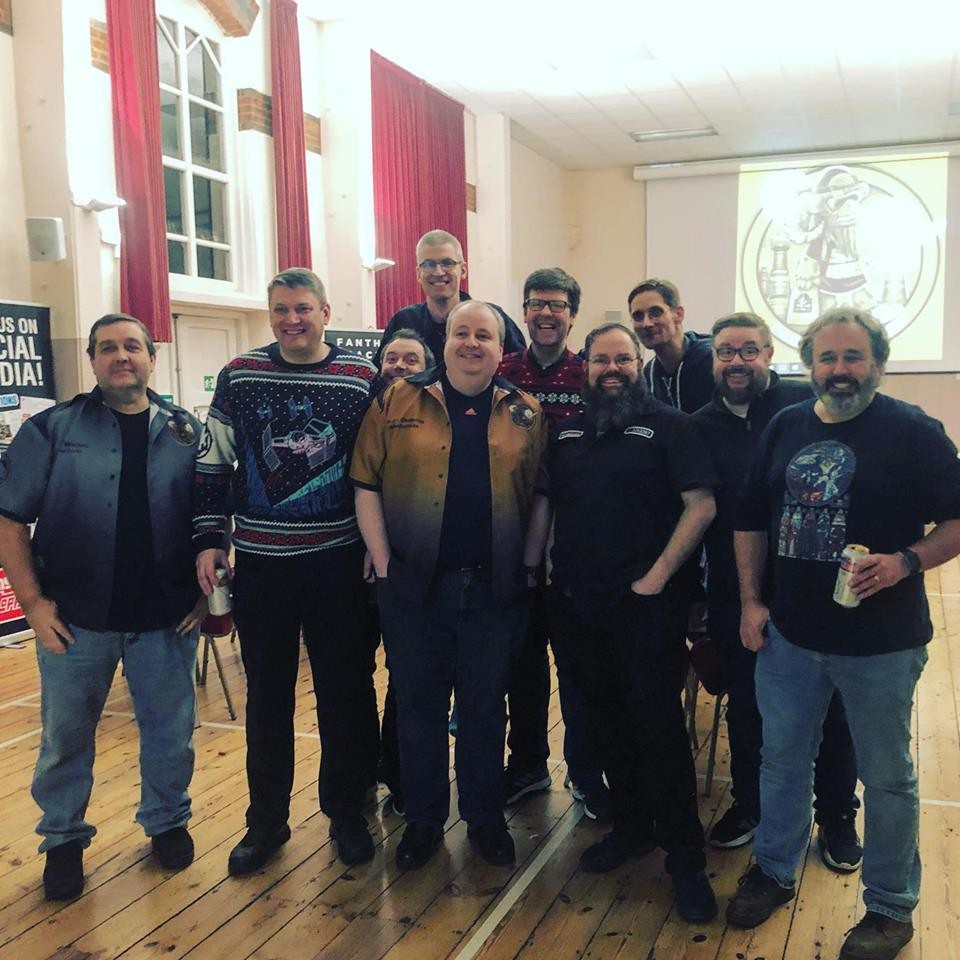 Here’s to the next one and many more thereafter – cheers Dave Tree.

Farthest From 22 LIVE: Sunday 3rd May