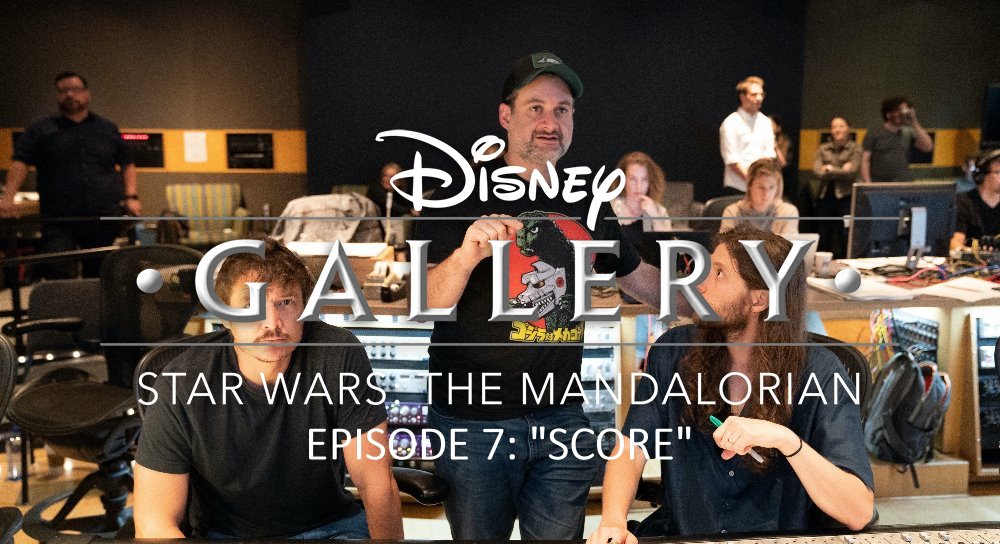 Every time an episode of Disney Gallery: Star Wars The Mandalorian lands, Fantha Tracks give their responses, and here’s our thoughts on the seventh episode, Score. Beware of spoilerific elements in here.

We meet Ludwig Göransson inside his studio where he details how The Mandalorian’s musical themes were written. We then journey to the scoring stage to witness the live orchestra recording session.

Star Wars is about family and found family—and maybe no behind-the-scenes story from Disney Gallery: The Mandalorian exemplifies this more than that of Oscar and Grammy-winning composer Ludwig Göransson, who scored The Mandalorian Season 1.

With a six-degrees-of-separation star chart that would make Kevin Bacon proud, Göransson grew up in a musical family, was roommates at the University of Southern California with film director Ryan Coogler (“Black Panther”) and has won a Grammy with Danny Glover (who happened to play Lando Calrissian in Solo: A Star Wars Story). And to top it all off, Göransson’s wife, Serena McKinney, played violin in the orchestra for the score of The Mandalorian, while pregnant with their first child.

This episode felt magical and unique from the moment the long-haired, expressively dressed Göransson appeared, blowing into a small recorder instrument—and then the heartstrings were plucked as he delved into the larger bass recorder—the audible soul of Din Djarin’s character in the live-action series.

“It’s all about creating worlds,” explained Göransson, who truly lived the process in closing himself off for a month with just instruments around him to conceptualize the earliest parts of the project.

And then at 8:47 of the episode (with an amazing encore, showcasing Jon Favreau holding up the device to the camera, at 9:04), came that moment most of us have experienced—when you’re so excited about something on your phone that you make friends gather around to watch or listen. Göransson, on-set with Favreau, Dave Filoni, and Bryce Dallas Howard, during shooting for Chapter 4: Sanctuary, played the Mando theme for the first time.

I’ll cherish their reactions to this initial audio absorption—just like I’ll cherish this episode that reminds me so much of an episode of Foo Fighters’ “Sonic Highways.”

As this fantastic episode commenced, I was transported back to the 1970s to when – as a child aged 7 – I had music lessons on the recorder. I think the first tune I was taught was called “Busy Bee” – it was basically the note B all the way through, with a C thrown in near the end.

I tell you who has been a “Busy Bee” – see what I did there? – Ludwig Goransson, that’s who.

Ludwig composed the music for The Mandalorian, purposefully guided by Jon Favreau towards the likes of legendary Western composer Ennio Morricone and the left of centre soundtracks in Kurosawa movies, rather than rehashing John Williams. It gives this Star Wars content a unique score – and one that works oh so well.

We get to meet Ludwig, who – forgive me LG – looks more akin to the late 60s musos from Laurel Canyon than a traditional soundtrack composer. He demonstrates the early development work of the score on various recorders – which to the uninitiated look a bit like a flute in one scale or a twisted drainpipe in another. The sound is unmistakable.

From recorder, to drums, to piano and guitar – the young maestro demonstrates how the layers came together. And he’s more than happy to throw in some technology too – preferably vintage.

The Roland GR-500 – which wasn’t on the Jawa’s Sandcrawler – is in fact a 1970s synthesiser played through an electric guitar. It makes fabulously eerie sounds.

Another wall of lights and switches is the backbone to the Episode 6 score. It all looks very early Human League or Depeche Mode.

The joy on the faces of Jon Favreau and Dave Filoni during the recording of the score is palpable. When all underpinned with a traditional 80-piece orchestra it sounds totally beguiling. To think, that immense score began with a £10 recorder and an acoustic guitar. A stunning job.

The music of Star Wars holds a special significance to fans around the world. Fans may hold different opinions on their favourite movie, may have come in at different points in the saga’s life but almost all fans agree that the music that has accompanied the saga over the years (even counting ‘In Trouble Again’ from Droids and ‘Ewoks and the Magic Sunberries’ from Ewoks on Ice) has enriched the adventure. This episode of Disney Gallery: The Mandalorian delves into the music of the series, showing how composer Ludwig Göransson approached the task, concocting a unique brew of music that feels every bit as GFFA as anything scored in the past.

Music is a deeply personal method of communication, meaning different things to different people, and Göransson verbalises that as he plays that already iconic theme on the recorder, and throughout the episode there are warm, satisfied smiles as the development of the music is featured. Just look at the smile on Filoni’s face at the scoring session (to hear that music played by an 80 piece orchestra is bliss) or watch Favreau as he gives his own thoughts on the music. And all the way through the musical innovations created by Göransson , a man who seems to ooze good nature and creativity. Scoring a season of The Mandalorian may well be the equivalent of three movies – a hefty task no doubt – but the way that score has enriched the show, to be played endlessly around the world as a part of the great galactic songbook, cannot be underplayed.

It’s sad to think that there’s only one episode of this marvellous documentary series left, and fingers crossed there’s enough new material to justify a second season once the show finished its sophomore year. Episodes like this, like all of the episodes that have preceded it, remind us just how difficult it is to make a Star Wars project, and harder still to get it right. Mando couldn’t be in safer hands, his adventures scored by a more suitable musical guardian and as such – not to wish our lives away – but these ears long for October and more of his masterful music.

One final thought. Should Anthony Daniels ever get his wish, and the much-missed Star Wars: A Musical Journey returns to concert halls around the world, the brief should expand to include not only the whole 9 movie saga and the music of the 2 standalone films (I’d lay down cold, hard cash to hear John Powell’s incredible score to Solo played live) but the music of The Mandalorian. To hear this roll around the Royal Albert Hall, or the Symphony Hall would warm the cockles of my geeky heart.

Pop! Star Wars: The Mandalorian - 10 Inch Chrome Mandalorian with The Child Vinyl Action Figure
$39.92
Buy on Amazon This is a paid link. Learn More. Clicking the link may take you to the Amazon store servicing your country Price incl. tax, excl. shipping.  Details correct as at: 2021-07-26