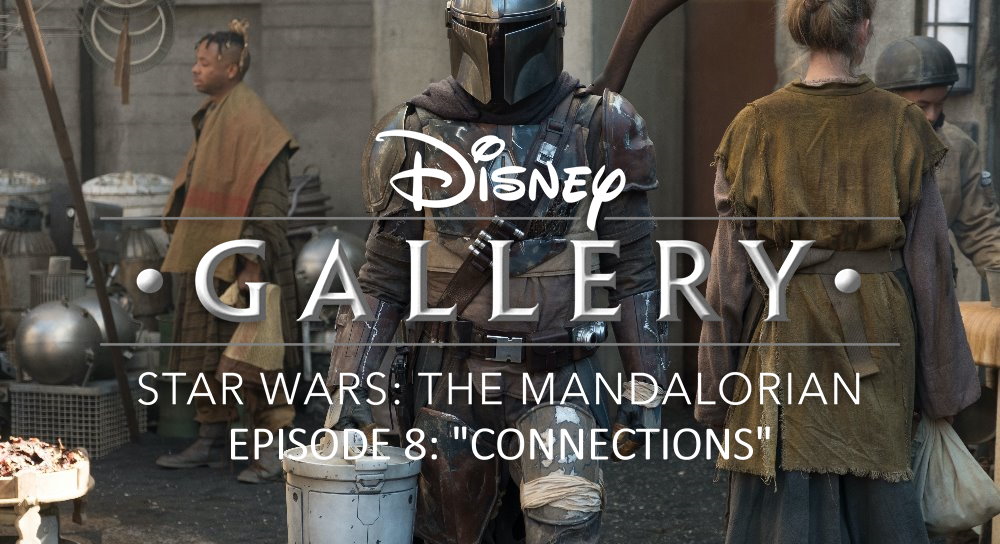 Every time an episode of Disney Gallery: Star Wars The Mandalorian lands, Fantha Tracks give their responses, and here’s our thoughts on the eighth episode, Connections. Beware of spoilerific elements in here.

Jon and Dave look back at some of the Star Wars characters and props that made their way into The Mandalorian. We also take a moment to showcase the 501st legion.

Well, we’ve arrived at the end of the road. In the last eight weeks I have watched each instalment of Disney Gallery’: The Mandalorian – a making of documentary focussed on the hugely popular first live action Star Wars TV show.

When The Mandalorian aired, as an audience we got to go on a journey of discovery. There were new worlds to explore, new vehicles to admire and new characters to cherish. Disney Gallery has, in many ways, done the same for those who really were only ever intended to be behind the camera – mostly.

Over the weeks we have had the pleasure of being in the company of the show’s score composer, the directors of each episode, but the two folk who have shone are Dave Filoni and Jon Favreau. For me, at this point in time, their take on the Star Wars galaxy has been the most engaging and fun element of the saga. I recall being at the panels last year in Chicago at Star Wars Celebration. Yes, The Rise of Skywalker looked very interesting and the surprise reveal of Ian McDiarmid’s return as Emperor Palpatine was tantalising – but then there was The Mandalorian.

Unlike The Rise of Skywalker, which promised so much, yet – in my opinion – fell quite short, The Mandalorian was exactly what I needed. This feels like Star Wars. And it is Jon and Dave chiefly that we as a community can thank. They just get it.

No one could have predicted The Child and the impact the character has made. Introducing such a cutesy element could have thrown the series to the wolves. It hasn’t. Masterfully, it has elevated it to a show that we didn’t know we needed.

In this final episode the two gurus reflect on how they have borrowed from Star Wars projects that have gone before, but with a fan service that is more of a nudge and a wink than ‘here’s another major character you wanted back’. The sequel trilogy did this so wrong.

Mando is clearly derived from Boba Fett. IG-11 is the IG-88 of the series, we have a wise and jaded ugnaught and The Child is of master Yoda’s unknown species. Throw in the incinerator trooper which harks back to a video game, E-web cannon from The Empire Strikes Back and Death Troopers from Rogue One and you are immersed in a galaxy far, far away.

Then there is what Favreau refers to as ‘deep cuts’ of fandom. The infamous ice cream churn carried by Willrow Hood through the corridors of Cloud City. Why would he be so desperate to take care of his ice cream maker? Well, perhaps The Mandalorian has answered this by making it the receptacle for carrying Beskar.

We have witnessed gonk droids, kowakian monkey lizards as doner kebabs, squid head being halved in a doorway. The list goes on. Damn, they even borrowed creatures from the Ewok movies of the mid-1980s. Who’d have thought that 35+ years later these beasts would figure in pop culture? It’s an eclectic mix for sure. And it is intended that way.

Filoni elaborates: “Imagine our older brother took all the cool toys and then we got left with ugnaughts and jawas and other peg-warmers, but somehow, we got a Boba Fett figure, and then we painted him silver and made him cooler.”

The ugnaught Kuill was going to have a pig-like voice. This was dismissed. It wasn’t about subverting our expectations.

“To me, it’s just using the universe that was created,” says Filoni.

“It’s not taking it in a different direction. It’s not just throwing a term in there for the sake of winking, saying “See? I get it.” That’s something that takes practice.”

Some recent folk behind the cameras of Star Wars projects would have done well to take note of this.

The Mandalorian is littered with great references to previous Star Wars properties. The mouse droid and Fett’s weapon from The Holiday Special being further fan favourites. But the introduction to live action of the Darksaber, first seen in The Clone Wars animated series, was spine tingling.

For me, the return to Tatooine was beautiful. Not only did we head back to Mos Eisley, but we got to revisit the famous cantina. As a nice nod to the original 1977 we got to see R5-D4 trundling around the cantina. Droids may not have been welcomed in the old days, but now EV-9D9 from Jabba’s palace is running the bar, voiced by Mark Hamill.

As much as the series is connected to previous Star Wars projects, it also has a connection to fan groups. When a gathering of stormtroopers was required, the 501st were called upon. Not only were they thrilled to be a part of the show, but they played the parts so well.

And when you need extra Rebel pilots, why not ask three of your directors to suit up? Dave Filoni, Deborah Chow and Rick Famuyiwa got great cameos. Cosplays coming soon!

I have loved this series, almost as much as The Mandalorian itself. I only hope that when season 2 launches, we get a similar documentary series straight after.

Stormtroopers of the 501st earning a surprise appearance on the first season of The Mandalorian in a sense sums up what I love about the live-action show and the eight-episode Disney Gallery: The Mandalorian series.

These “bad guys doing good” are dedicated people from diverse backgrounds across the globe—even if most in this specific show are from California—who love Star Wars so much that they spend their time, money and effort to cosplay at a high-level to volunteer and give back to their communities.

And they were rewarded for it.

The final episode of this series is a beautiful reminder that Star Wars is, and should be, a special experience that, when done right, provides joy through surprises, the evolution of characters, and layered stories.

Experiencing the chemistry and camaraderie of the experts filling the rotating tables of creators involved with the series makes me love The Mandalorian series even more. And I saw respect for the Star Wars DNA from all of them—Jon Favreau summed it up best for this crew and anyone else who ever makes a movie or show, writes a book, or draws a comic:

“Because we’re not George Lucas, because we’re also—we’re just filmmakers who grew up watching it—just because we say it doesn’t mean it’s cool…we’re definitely thinking, how is this going to play with the fans?”

Arguments can be made that there were unnecessary deep cuts, fan service or too many nods to the past, but this episode shines a light on the fact they were done in smart, authentic ways by storytellers who truly respect the fans—and are fans themselves.

I’m going to leave this a little more vague than other reviews because I think it is important for anyone who is going to watch this episode to be able to soak in each moment or homage to the past, which felt like a giant Star Wars hug.

Is it October yet?

Coming hot on the heels of the main show itself, there can be little as satisfying as this 8 part series which delved into the making of The Mandalorian. Sure, at times it might have sprained its wrist patting itself on the back, but for the most part Disney Gallery: The Mandalorian has brought us an insight into the process of making a Star Wars project that the films could only dream of. Imagine a docuseries like this following the production of the sequels, or the Star Wars Story films? It’s a tantalising thought; perhaps Disney have realised there’s a huge hunger for content like this out there in Star Wars land.

We’ve covered every aspect of the production, from concept to completion and after last weeks superb look at the music of the show – already every bit as iconic as the character that leads the show – we now turn our attention to the final episode and ‘Connections’, which is an unabashed love letter to the entirety of Star Wars, from the deep cuts to the broad sweeps of the saga. Filoni and Favreau have mined every corner of the saga to populate the show with elements that embed The Mandalorian in the GFFA. And the magic of it; 99% of it worked a charm. Season two has a VERY high bar to reach.

The episode itself has an end-of-term, schools out feel to it, like the cast and crew have worked their socks off (which clearly they have) and this is their end of term party. There’s an ease to the episode, a lightness that translates to the screen as we connect the many dots (the ice cream maker / cantono from Empire and the Running of the Hoods, the focus on the 501st, the list goes on) and even explain in depth why Filoni, Famuyiwa and Chow were cast as X-Wing pilots (something I disliked at the time but having heard the reasoning behind it I’m now backtracking – after all, why give Favreau free ammo).

As October rapidly approaches, with season two and all of the rumours and chatter surrounding the show, our hopes are twofold. One, that the sophomore season matches the gritty brilliance of the first, and that a second season (or at least a couple of lengthy Disney Plus specials) give us an insight into the advances in technology, its application, their influences and a look at the cast. This has been a lot of fun – for me, this alone has made Disney Plus a worthwhile monthly purchase – and let’s hope more is to follow.

Yes, I’m talking to you Deborah Chow and the crew of Kenobi. The galaxy is watching.