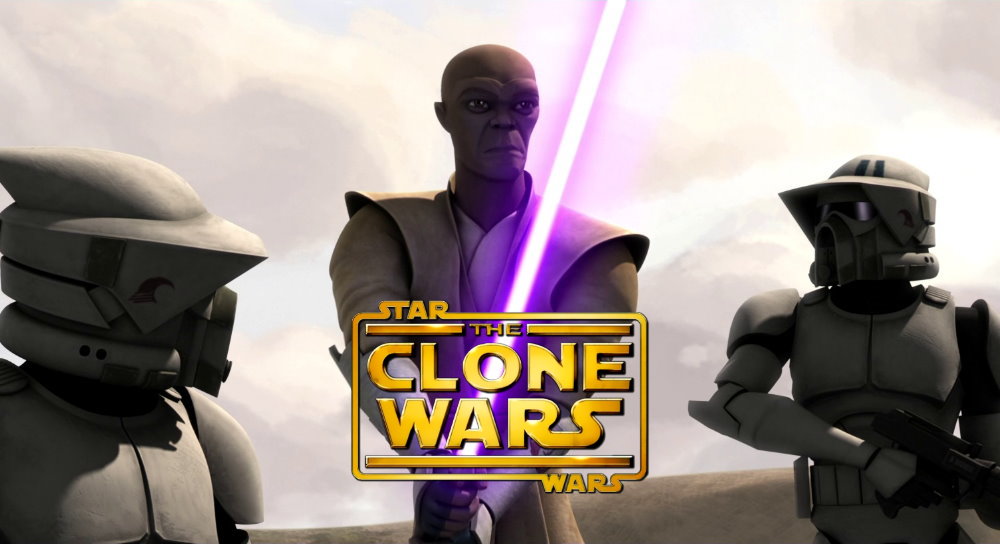 When The Clone Wars first aired back in late 2008, Lightsabre.co.uk guest reviewers looked at the show, giving their initial gut impressions on that groundbreaking first season – but not every review was completed, and so those reviews written at the time were never published. In an article written in 2009, Bob Vitas looks back at the twenty-first episode of season one – Innocents Of Ryloth.

“Compromise is a virtue to be cultivated, not a weakness to be despised.”

Republic victory is at hand! Clone troopers under the command of the Jedi have successfully invaded the Separatist-occupied world of Ryloth. Anakin Skywalker battles the enemy in the skies, while Obi-Wan Kenobi frees villages from the grip of vile Separatist leader, Wat Tambor.

Now, Jedi General Mace Windu leads the attack on the enemy lines in the final offensive to liberate the capital city of Lessu….

So, here we are on Ryloth with Mace Windu, trying to rally the Twi’leks to fight for their home. Will the Jedi and the clone troopers that serve him prevail, or will the laughably evil Wat Tambor steal the treasure for himself?

In general, I have been pleasantly surprised by the entire The Clone Wars series. The animation has been very good, and the stories have been more on the adult side than the kid side. Granted, the battle droids are pathetically funny, but the rest of the stories have been quite engaging. Despite the Internet scuttlebutt about the inconsistencies in the upcoming season, I am looking forward to seeing what happens next.

That said, I have to admit that Liberty on Ryloth wasn’t one of my favorite episodes, primarily because it focuses on one of my least-favorite Jedi. Maybe it was Samuel L. Jackson’s portrayal of him, or maybe it was exactly how GL wanted him to come across, but Mace Windu always seems like a smarmy kind of Jedi. I guess, then, that it makes a certain kind of twisted sense that Master Windu would be the one to liberate the Twi’leks, who are always portrayed as something less than reputable. (Bib Fortuna, anyone?)

The whole story of the liberation of Ryloth is typical of the galactic situation during the Clone Wars. Ryloth was an out of-the-way world that had little strategic value (although it apparently had oodles of treasure… see below), and yet the Galactic Republic and the Jedi Order decided to send the second-most powerful Jedi Master of the era – as well as Obi-Wan Kenobi and Anakin Skywalker – to liberate the planet. Although the Outer Rim Sieges won’t take place until the very end of the Clone Wars, several battles such as this one on Ryloth occurred in the far reaches of the galaxy early in the war, so the plan to stretch the Jedi thin was well underway. Having a powerful Twi’lek Senator standing behind the Chancellor probably helped push the liberation mission along…even though Cham Syndulla claimed that the Republic initially refused to expend the resources to defend the planet in the first place.

Cham Syndulla is an interesting character. Here is a being who stood for Twi’lek independence during the build-up to the Clone Wars, and was smart enough to recognize that the Confederacy of Independent Systems was not going to give them true independence. The invasion of Ryloth by the CIS and the subsequent sacking of the planet by Wat Tambor forced him into a position of agreeing to help Master Windu liberate the planet… the adage “the enemy of my enemy is my ally” comes to mind. Syndulla did openly question Windu about the benefit of working with the Jedi, fearing that the Jedi and the Republic might be no better than the Separatists. He only agreed when Senator Orn Free Taa agreed that no Republic presence would remain on Ryloth following the liberation. Probably by that time, Palpatine’s plan to appear concerned about Ryloth while placing Jedi in the face of danger was reaping enough benefits that walking away from Ryloth following its liberation was a foregone conclusion.

From an EU point of view, this episode was troubling. We suddenly have the new capital city of Lessu, and it sits on a plateau above the ground, where a grand fortress has been established. We also have the Cazne battlefield and several small villages that are also located aboveground. However, we also have several decades of Ryloth backstory that describes the planet as a tide-locked world on which the Twi’leks were forced to live along the terminator line in underground cities that protected them from storms and other natural violence. I guess a 22-minute cartoon was too short to explain the whole tide-locked situation that has been developed in various source materials. Oh, wait… this was a three-part episode! This is not the only twisting of EU lore in The Clone Wars series, and it may have been required from a visual standpoint, as the production notes on the official site indicate that other scenes were “too much like Mustafar”. Yes, there was a kind of unofficial mandate from GL early on that stated the planets in the galaxy would be categorized by their primary environment (desert, forest, city, etc.), but this does tend to limit the number of “unique” planets. (Maybe this is why many early EU stories only occurred on a handful of planets…) Besides, most Star Wars fans are smart enough to realize that not every desert planet is Tatooine…

Another thing that bugged me was the plasma bridge. Yes, it’s a cool idea to be able to prevent an enemy from attacking your fortress by simply shutting down the power to the bridge. I might even be able to stomach the idea of beings and droids actually walking on plasma energy, even though most other instances of this kind of thing are usually harmful to matter that touches it. What I didn’t get was the ability of repulsor vehicles to move across it. I would have thought that these vehicles would fall through it, since there was only energy – and no real mass – for the repulsors to push against. Maybe the plasma energy in the bridges acts like a magnetic opposite to the repulsor energy field? Ah, well, “suspend your disbelief” as they say at the movies…

Star Wars Adventures: The Clone Wars - Battle Tales
$14.99
Buy on Amazon This is a paid link. Learn More. Clicking the link may take you to the Amazon store servicing your country Price incl. tax, excl. shipping.  Details correct as at: 2021-01-23

Star Wars: A New Hope
$19.99
Buy on Amazon This is a paid link. Learn More. Clicking the link may take you to the Amazon store servicing your country Price incl. tax, excl. shipping.  Details correct as at: 2021-01-23
Bestseller No. 2

Star Wars: The Rise of Skywalker
$19.99
Buy on Amazon This is a paid link. Learn More. Clicking the link may take you to the Amazon store servicing your country Price incl. tax, excl. shipping.  Details correct as at: 2021-01-23
SaleBestseller No. 3

Star Wars: Light of the Jedi (The High Republic) (Star Wars: The High Republic)
$17.94
Buy on Amazon This is a paid link. Learn More. Clicking the link may take you to the Amazon store servicing your country Price incl. tax, excl. shipping.  Details correct as at: 2021-01-23
Bestseller No. 4

Star Wars: Return of the Jedi (Theatrical Version)
$19.99
Buy on Amazon This is a paid link. Learn More. Clicking the link may take you to the Amazon store servicing your country Price incl. tax, excl. shipping.  Details correct as at: 2021-01-23
Bestseller No. 5

Star Wars: The Phantom Menace
$19.99
Buy on Amazon This is a paid link. Learn More. Clicking the link may take you to the Amazon store servicing your country Price incl. tax, excl. shipping.  Details correct as at: 2021-01-23
Bestseller No. 6

Star Wars: The Force Awakens (Theatrical)
$19.99
Buy on Amazon This is a paid link. Learn More. Clicking the link may take you to the Amazon store servicing your country Price incl. tax, excl. shipping.  Details correct as at: 2021-01-23