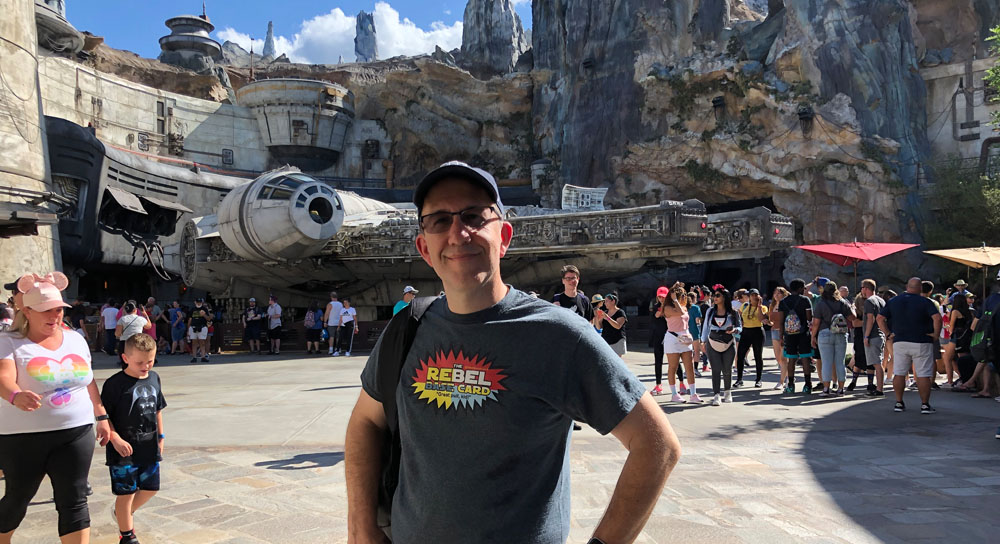 In the world of podcasts, there is an embarrassment of riches when it comes to top quality shows for Star Wars fans to choose from. However, if you’re a fan who collects Star Wars trading cards, one show suddenly stands out from all the rest: The Rebel Base Card, hosted by card collector and broadcasting veteran Greg McLaughlin. In addition to providing the only Star Wars-themed podcast in existence that scratches the trading card itch, Greg also has the unofficial distinction of being the first podcast host to be declared “as clumsy as he is stupid” by everyone’s favorite Corellian corvette-storming Sith Lord. Listen to the start of any episode and you’ll know what we’re talking about. That might be a compliment? Yes, let’s go with that.

Despite the show’s hilarious introduction, The Rebel Base Card podcast is far from being “a piece of junk”. Launched in March of 2019, Greg was able to start things off with a bang by recording shows at Chicago’s very own C2E2, and followed a few weeks later, at the first ever Star Wars Celebration to touch down in the Windy City. Within half a year, even Topps Star Wars Authentics manager Mark Von Ohlen had already made an appearance on the show. Talk about hitting the ground running!

Even more important than the quality and meteoric rise of Greg’s show is the character of the man himself. Greg is as nice of a guy as you can ever hope to meet, in or outside of Star Wars fandom, and is just as kind and well-spoken away from the microphone as he is behind it. With a full pipeline of Star Wars movies and shows in the near future and beyond, we are also looking forward to many more years of trading card banter to come. 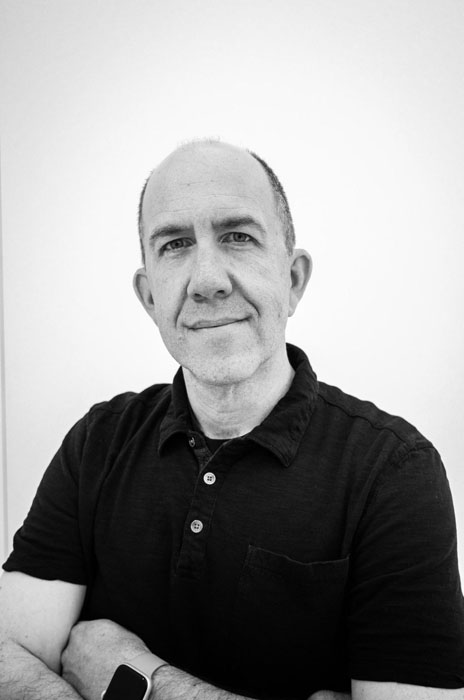 DL – What are three interesting facts about yourself?

GM – I lived in the Pacific on an island called Saipan for nearly a decade. Between those years and my time in Florida, I missed over ten years of winter’s cold dreary weather.

I am originally from Ohio. My wife is from the Philippines, my son was born in Florida, and my daughter here in Illinois. Four people under the same roof from four different places.

I absolutely loved the C-3PO’s cereal and it was the one time I had my stuff together enough to gather box tops and send away for an offer for those micro figures.

DL – What is your earliest Star Wars memory?

GM – I saw the original Star Wars late in the game; actually when it hit the drive-in circuit either in late 1977 or early 1978. I was 7 or 8, and was immediately hooked. My friends and I collected the action figures, comics, and of course I collected the trading cards.

DL – How did you get into collecting Star Wars trading cards?

GM – I grew up in a small town in Ohio with about 1200 people. We had one traffic light and a local pharmacy/convenience store which stocked, amongst other things, baseball cards, magazines, and comics. I remember seeing and picking up Topps Star Wars cards from the tail end of the blue series one and red series two, but really started to get into it with the yellow-bordered series three. Once the Star Wars sets had finished their run, I started to collect baseball and football cards. Baseball I collected pretty heavily for a number of years until the mid 1980’s when I traded them in at a local shop in the next town for comics. I wanted to read this title I had heard so much about called The X-Men.

DL – What is the most prized card (or cards!) from your collection?

GM – I have a few autographs, but I do have a really nice film cell card from the Topps 40th Anniversary set from 2017 that came in a blaster box of ten packs.

DL – What is your favorite story related to your card collection?

GM – I would have to say the one Star Wars Wonder Bread card I ended up getting. Topps produced a series of cards for Wonder Bread that were inserted into the loaves of bread. So you would see the card, with no protection for the card at all mind you, at the end of the loaf on store shelves. There were 16 cards in all. My mother used to buy bread in bulk and I was pumped about these until I realized I got all the same card: Princess Leia. 40 years later I ended up finally finishing my set through eBay. That Princess Leia card is probably my favorite, since for all of those years it was the only card from the set in my collection.

DL – With the growing popularity of digital trading cards, how do you feel it enhances the hobby as a whole? 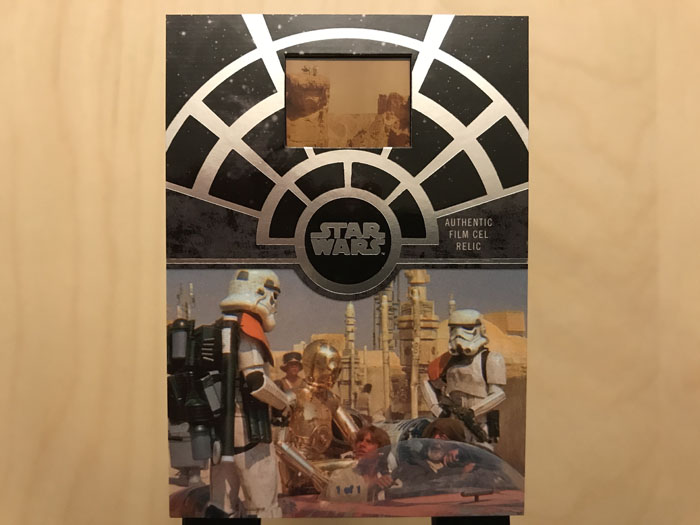 GM – To me, the Star Wars Card Trader app is like a digital lab for Topps. You can see them experiment with all kinds of card sets, mechanics, and inserts without having to send them to a printer. I think the app can be different things to different people. Some can play for free, as the app gives you daily credits, and some can put some real money down and go for the harder to get cards and sets. Since it is digital, it takes up very little space on your physical shelf but can take up a lot of your free time, haha! I do get to trade in the app with folks and it can be a nice social pastime that can help promote trading card collecting.

DL – What inspired you to launch the Rebel Base Card podcast, and how did you come up with the name?

GM – I have a background in radio and TV production and am a huge fan of podcasts. At some point, I realized that I wanted to start contributing content instead of just consuming it. Although my career has taken a different path away from media, I have come to enjoy producing it and getting to flex some of those muscles again. The podcast is a nice extension of my Instagram account, allowing me to make additional content for those who take more than a passing interest in the content I put up.

The whole thing was originally going to be called “The Cardboard Cantina”, but after a search, with artwork already made, I realized the name was already taken. A very late Saturday night was spent going over any and all alternatives. I wanted to match up a Star Wars name to something card-related and got lucky. Necessity is the father of invention, haha! Getting the account and the URL was the next step in locking it down. 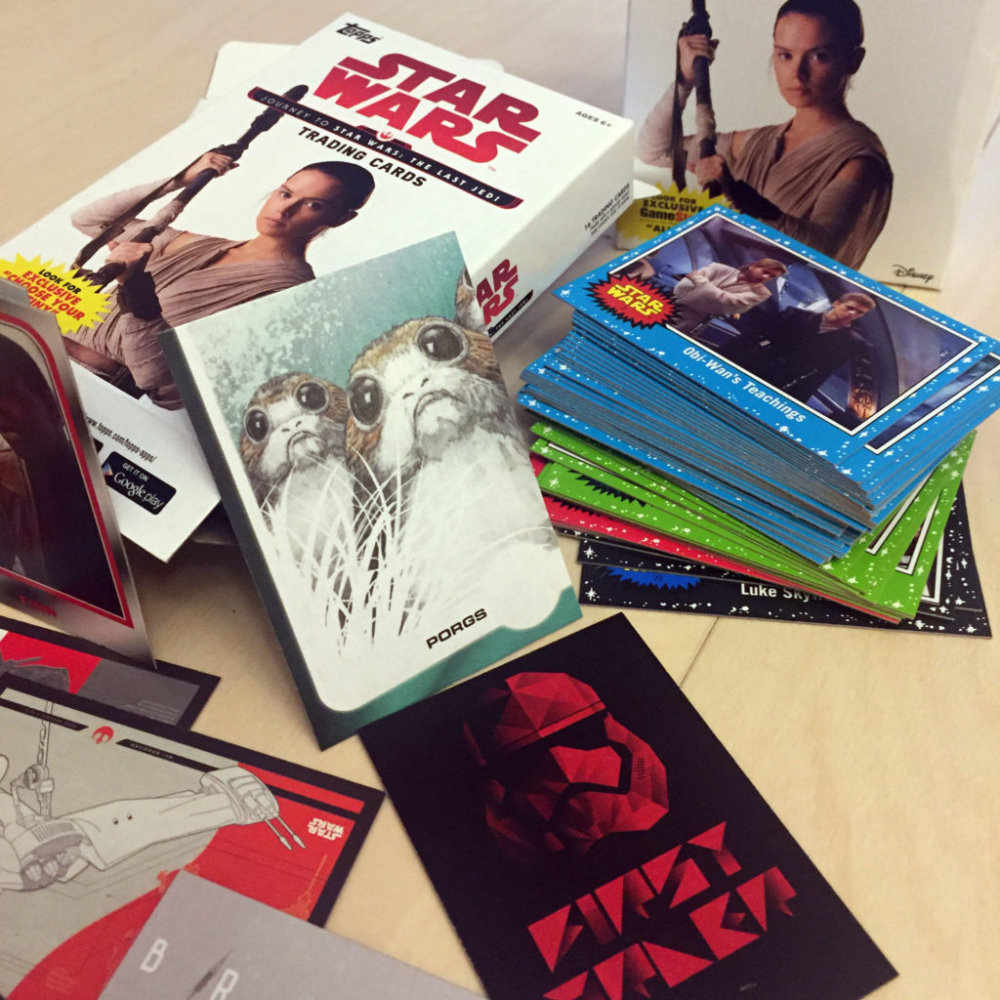 DL – What is the most rewarding aspect of hosting Rebel Base Card?

GM – Getting to talk to the artists behind some of the sketch cards and finding out their stories behind the cards. I also get to talk with collectors and people in the Star Wars community who are doing cool things or have amazing passion for the franchise. There are so many great stories out and it’s fun to find them. I’ve also had the chance to speak with Mark Von Ohlen, the Star Wars Authentics manager at Topps. Mark was a wonderful guest to have on, and was on my wish list for some time. I wanted to get my show production in a good place first so that I could be ready and quickly able to accommodate a busy schedule like his. I may do this part time, but talking about Star Wars autographs and cards is his full time gig.

DL – And the most challenging? 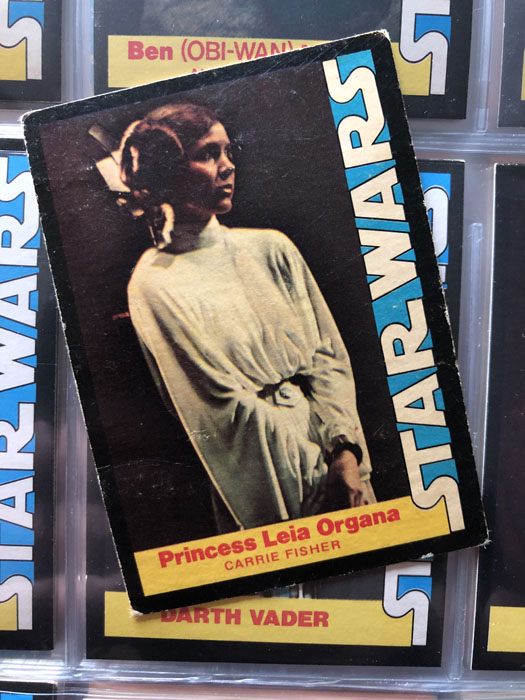 GM – Of course, time. I work a couple of jobs so I have to be as efficient as possible when I produce the podcast. The nice thing is that a lot of times my interviews are evergreen and are often recorded in advance. This allows me to edit when I have time and can keep to a regular schedule.

DL – What is your dream goal for Rebel Base Card?

GM – My dream goal would be to continue to talk with more people and keep this podcast going. I would hope that I can help promote card collecting and maybe find and talk to that aspiring sketch artist that would get to see their own card opened in a pack of trading cards.