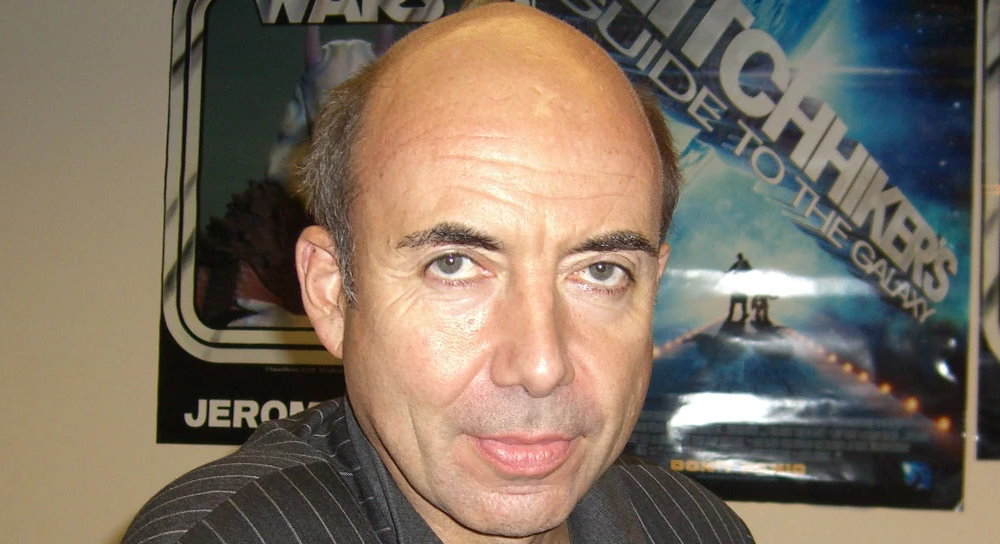 Between 1999 and 2009 Lightsabre.co.uk brought news, fanfic, podcasts and much, much more to the masses. Our seventy-third guest played a multitude of characters in the Star Wars prequel trilogy, including Rune Haako, Oppo Rancisis, Mas Amedda, Orn Free Taa, Horox Ryyder and Graxol Kelvyyn – Jerome Blake.

JB – Welcome to my lounge.

Lightsabre – You have an amazing array of characters that you played throughout the prequels? At a guess, how many hours do you think you spent sat in the make-up chair?

JB – Amazing is the word. Originally, I was asked to play two characters. I finished up with seven. How many hours in the make-up chair? I wouldn’t know how to quantify the total other than “a lot”. The amount of time for each characters varied depending on how the look was achieved. For example, Rune Haako didn’t require any make-up because that was a complete animatronic head worn like a crash helmet.

At the other end of the spectrum was the galactic senator, Orn Free Taa, whose face was created from foam latex pieces applied painstakingly by two technicians over a five hour period. My contribution to this part of the process was snoozing, drinking tea, and eating as many doughnuts as possible so that the body matched the face. 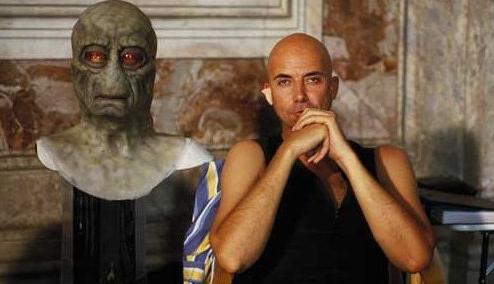 Lightsabre – Tell us something of your career. Where did you begin in acting and what led you to where you are today?

JB – Barons Court Theatre, London. Of course I couldn’t have known at the time but my first public performance as an actor was a precursor of things to come. It was a play and it’s sequel presented in one evening, so my first play was a prequel and I had four different characters. Sound familiar?

I suppose that experience set the tone in that I’ve been fortunate enough to have had a variety of opportunities and I’m still excited by the thought of ‘What’s next?’

JB – To answer that question fully I’d have to write a volume of memoirs but briefly, it has been and continues to be an incredible journey. When Star Wars was released in 1977, I wasn’t in the business so I went along to watch in wonder just like millions of others. Almost twenty years later I was invited to appear in The Phantom Menace. Funny ol’ game life. 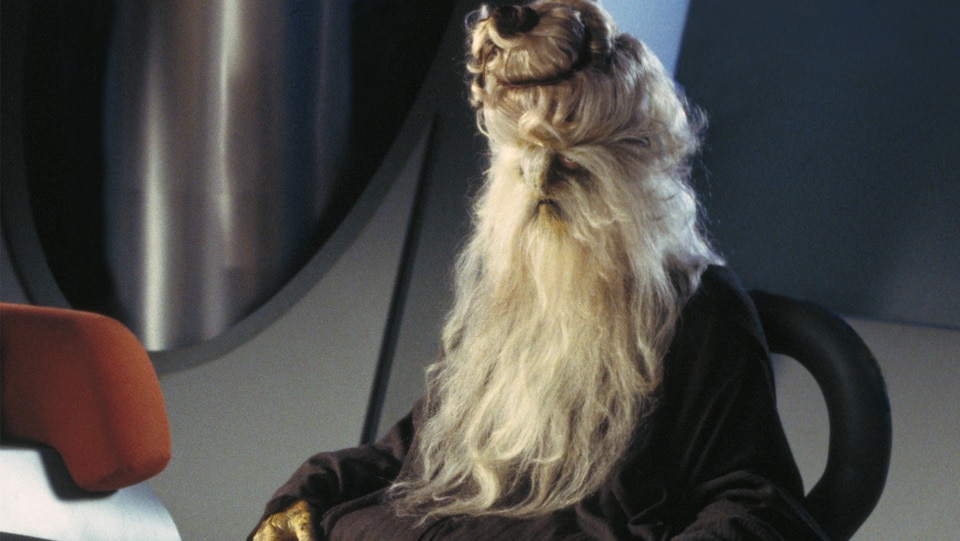 Lightsabre – You started late in your acting career. Why was that?

JB – I had been a musician for over twenty years and conspiracy and circumstance had brought me to something of a crossroads. Towards the end of the music era, I’d appeared in a few plays, TV commercials and music videos and I found that I was enjoying the acting more than the music. Without really knowing what I was doing, I made the decision to concentrate on acting. Thankfully, it didn’t turn out to be such a bad choice.

Lightsabre – You’ve worked on other effects heavy films in The Fifth Element and the Hitchhikers Guide to the Galaxy. How different were those films from the Star Wars experience?

JB – In some ways it would be more appropriate to talk about the similarities between them. All the films you mentioned were fun to work on, physically demanding but great fun. All the directors were inspirational. All the crews were top-notch. All the catering…

I guess when talking about effects and creature-heavy productions there is one fundamental difference – Star Wars is the daddy. 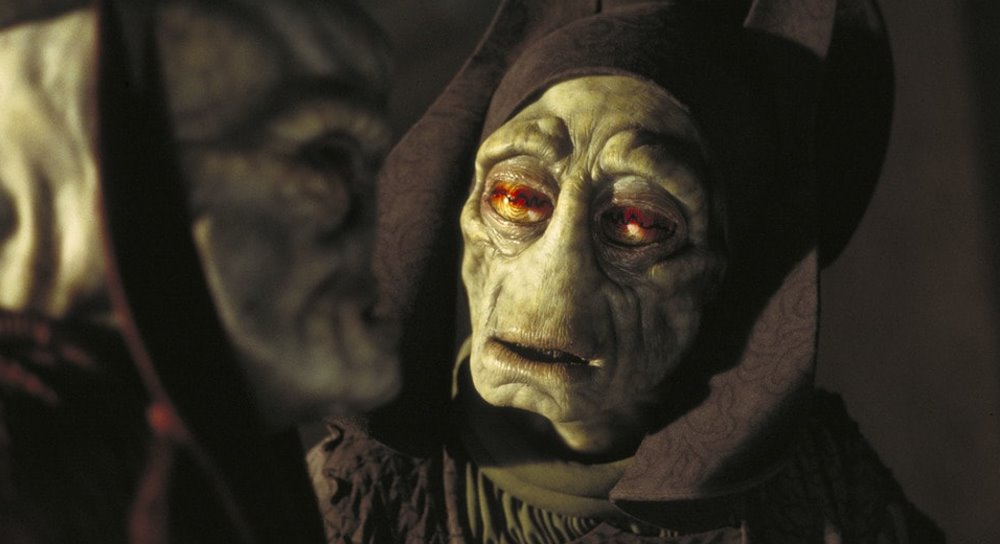 Lightsabre – What were your feelings on Revenge of the Sith? Did it satisfy your fan appetite, or simply whet it for more adventures to come?

JB – I’ve been asked this and for me there are two answers: Firstly, I enjoyed it and all the strands of the story were heading in the direction of A New Hope. Second, I think a lot more time needs to pass to be able to see all six films in context and more importantly, objectively. More adventures to come? You must know something I don’t. Please keep me posted.

Lightsabre – You’re a famed convention goer, and together with Richard LeParmentier you are known as The Rat Pack. Please describe to us an average convention weekend for you.

JB – Conventions have been part of that incredible journey I mentioned earlier. I knew Star Wars was popular but until I started going to conventions I had no idea how popular.

On a serious note, one of the best things to come out of this has been meeting and bonding with the UK Garrison. Two years ago I asked them to help at a charity preview of Attack of the Clones, in aid of Medicinema, and not only did they step up on that occasion but have continued to do so ever since. They have my gratitude. I don’t really know what an average convention weekend is. There’s always something special to identify them. So many tales, so little time!

The Rat Pack? Praise indeed. However, I can’t deny that we have been known to enjoy the occasional glass of Sherry in most parts of the known world. In fact, were it not for missing out on meeting friends new and old, Richard did suggest we could save on airfares and carbon footprint by setting up a bar in front of a blue-screen and have ILM drop us in to exotic locations of our choice. Top of my list would be The Simpson’s: Richard’s sitting in Moe’s Tavern. Homer enters, goes all dreamy and says, “MMMMMMMMMOTTI”. 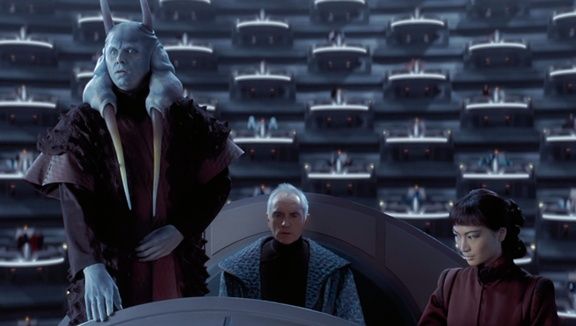 Lightsabre – You spent twenty years as a musician before giving yourself over to acting. What do you play?

JB – Bass guitar and piano although I have to admit to being out of practise. All my guitars were stolen and I haven’t found the heart to replace them.

JB – Who knows? The next phone call could be the start of a brand new adventure.

JB – One of the most comprehensive sites I’ve seen. I feel honoured to have been asked to contribute.

Lightsabre – It’s been a great interview, and thanks for being our guest. Just one final question. Oppo Rancisis, Mas Amedda and Rune Haako are pushing their trolleys around the supermarket. Being a Jedi, Oppo can use the Force to get the best prices, Mas has the weight of authority to demand a better discount and Rune is a part of the Trade Federation so he knows all there is to know about getting a good price. Which one pays the least at the checkout, and why?

JB – Oppo Rancisis. With fingernails like that he’d never get his wallet open.

This interview was originally posted on lightsabre.co.uk on 22nd July 2007.